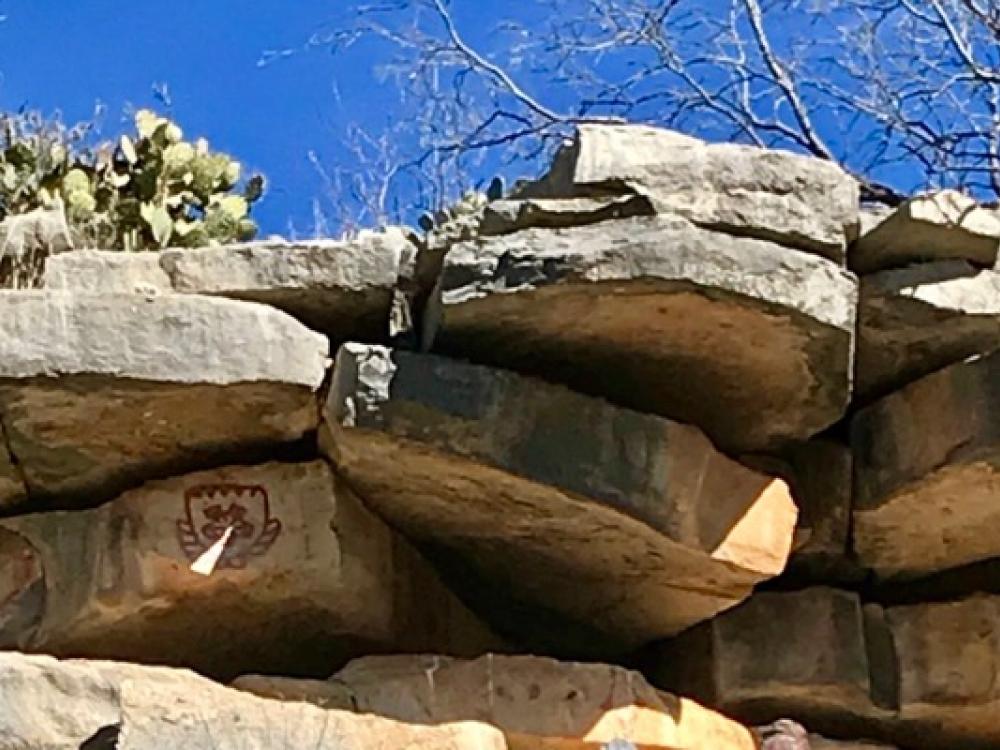 The two buffalo stand like statues along the ranch road to the Paint Rock pictographs. We idle next to the two huge pasture pets, so still we can hear their deep rumbly breathing — a good omen for Winter Solstice. 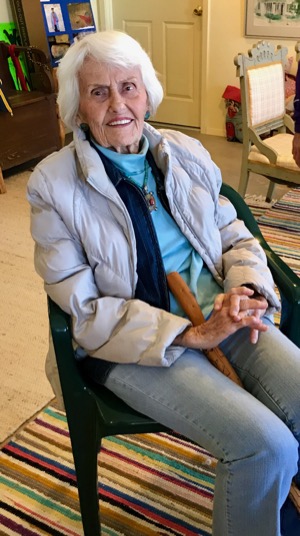 My traveling companion Martha Heimberg and I meander down a ranch road to a broad, rocky swath fronting the Concho River. To our right rises a wall of sandstone about a half-mile long.

Over eons, the wall fractured into blocks that shifted askew. Eroded at the base by periodic floods, a protective overhang formed. The passing noonday sun overhead creates fantastic patterns from the cracks and angles of the rock. 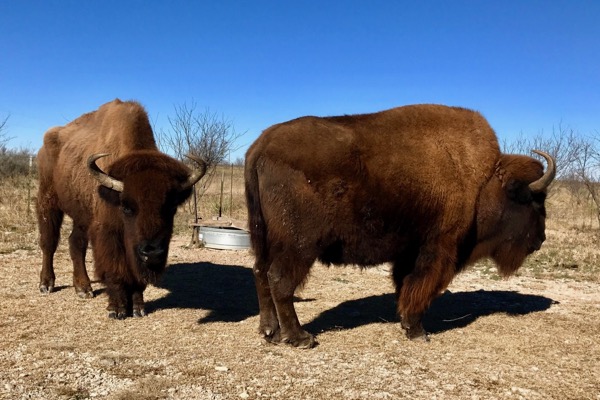 “Look, Martha, over there, the second stack of rocks down. In red ochre.”

The first pictographs over a thousand years old emerge into view. Slashes of ruddy paint create circles, squiggles and flying birds. Nearby is a sun symbol and hump that represents a buffalo. 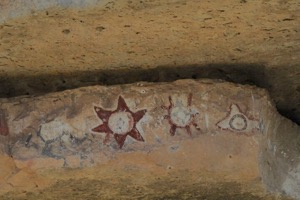 Tucked amid the sandstone blocks are a myriad of sun and star symbols, some perhaps representing the moon, along with stick figures of singles, couples, groups, many with arms held up seemingly in celebration.

There is drama — scenes of hunting and violent encounters with settlers — and action — a yard-long headless bird flies, insects buzz, a large boat floats. Fantastical creatures and a giant bear paw. A plethora of geometric symbols that evoke weather and time.

Scattered among them: black-paint graffiti from colonial and Civil War adventurers, even vandals from the early 20th century. People have been camping on this Concho River bench for a very long time. 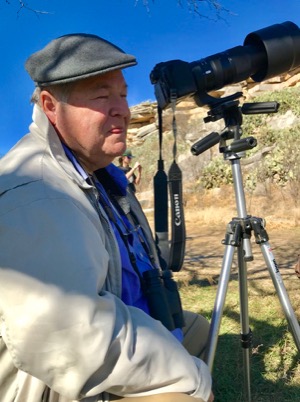 About 50 people gather across from the wall. For a couple hours prior, shadows and light played first across a creature in a four-horned (possibly buffalo) headdress, as if to initiate what follows. A line of light shot across a vertical squiggle and circle, then hit an insect, corn plants and sun symbol as it angled upward.

Photographer Steve Schiwetz sets up for the big moment. Photo by Amy Martin.

Martha and I find a place in the crowd, setting up chairs next to Michael Anderson, a piano technician from Weatherford. A regular at this event, he explains that a coyote-shaped shadow is slowly edging closer to a roadrunner shadow. Once they touch, the central winter solstice light phenomenon begins: a beam of light piercing the center of a shield pictograph featuring a turtle.

Squint as I may, I can’t make the shadows out. Michael tries to show me again. I mention that Winter Solstice means a lot to me, that I created popular gatherings on the shortest day for 20 years.

Dang, the world is small. 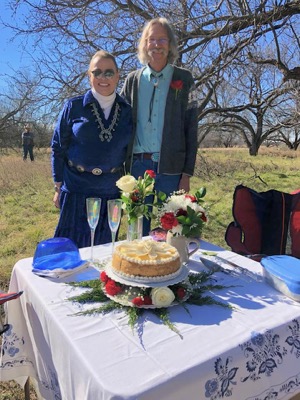 Crystal Crosby and Bruce Arnold got married on the Winter Solstice at the Paint Rock ranch. Photo by Martha Heimberg.​

Behind us, Crystal Crosby sets up a small card table and festoons it with beautiful textiles and food, in preparation for her marriage to Bruce Arnold of nearby Ballinger. They re-connected at their Wisconsin high-school reunion. Soon the Justice of the Peace for Runnels County, David Sellers, will arrive.

“Right up my alley, this solstice stuff,” says Crosby. “I call myself a Christian, but I’ve always loved the whole celestial thing.”

The soon-to-be-betrothed radiate hope and bliss. She shines in a royal-blue velvet dress and turquoise jewelry given to her while living on a Navaho reservation. He is spiffy in his bolo tie and can’t stop smiling. 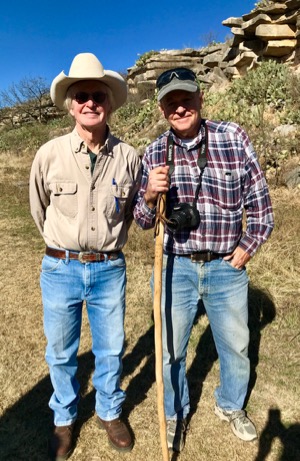 Now after 11:30 am, numbers swell to more than 100. Groups gather in a line of folding chairs in front of the wall, from as far as the Gulf Coast and North Texas. Many locals are among them, proud of their Paint Rock heritage.

A group stands in rapt attention as a man in his 60s talks. I hit the jackpot: it’s Kim A. Cox, essential anthropological contributor to The White Shaman Mural: An Enduring Creation Narrative in the Rock Art of the Lower Pecos. He is waxing about the relationship of these pictographs to those in the Pecos River style some 200 miles to the south.

I follow Kim and his pal Paul Swacina around like a knowledge-seeking puppy. The anthropologists are on a mad chase to detect additional winter solstice phenomenon, focusing on how shadows, rather than light, move across the pictographs.

The rocky slope upon which the pictograph wall sits is steep and strewn with ferocious prickly pear cactus. The anthropologists scramble up and perch precariously as they seek phenomenon not visible from a distance. Crowd members make wagers on who’ll stumble and roll through the cactus first. Thankfully, bets go unfulfilled.

Joining the scrambling scientists is Bill Campbell, son of Kay, who shares ranch responsibility now that his father, Fred Campbell, has passed. Kay and her family have been stewards of the pictographs since her grandfather began purchasing the land in 1878, drawn down from the Midwest by tales of ancient Indian art. 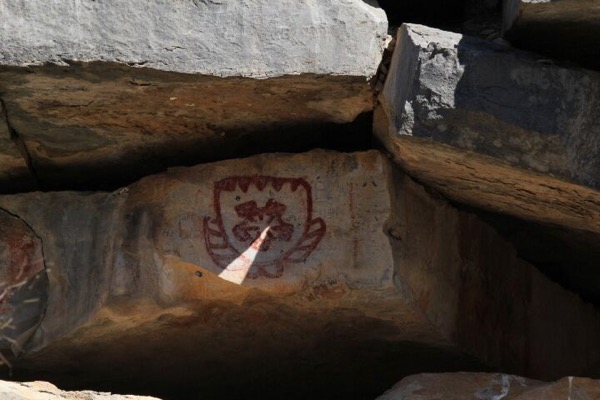 The sun dagger enters the center of the turtle shield pictograph at the height of the viewing. Photo by Steve Schiwetz.

Excited whispers arise: “She’s here!” Kay’s trademark Taurus eases down the ranch road, driven by the sweetly attentive Callan Clark, president of the Concho Valley Archaeological Society, who rarely strays more than a few from her side. Bill scrambles down the slope to greet her.

On the rock wall, a bright dot of light shines on the lower left edge of the turtle shield. Over the next 30 minutes, it will swell into a dagger-like wedge and move diagonally upward until the tip is at the center of the pictograph.

Kim and Paul depart the slope, allowing attendees unhindered views. Their friend Steve Schiwetz has been tracking the Sun dagger progression for the past hour, clicking a photo with his powerfully lensed camera every minute or so.

A slight pall of reverence settles upon the excited sociable crowd. The precision of the sun dagger aiming for the center of the turtle is awesome. Time seems to stop as the dagger point finds its mark. It continues to broaden as the edges lose their crispness and begins to shift off center.

SECRETS OF THE SUN 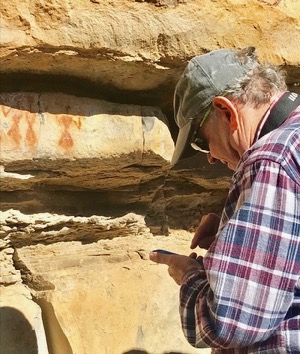 With alarming rapidity, most in the crowd gather their chairs and depart. For them, the show is over. The newly betrothed pack up as well, offering the last of their ceremonial food to hungry attendees. (It was fabulous!)

A shadow falls on the heads of dancing women pictographs. Photo by Amy Martin.

Bill Campbell and volunteer head out to cut brush that continually encroaches on the pictographs and surroundings. The anthropologists take off to wall’s west end, seeking out further phenomenon. I puppy-follow, of course.

A shadow moves across a line of dancing women pictographs, slicing them off at the head. “Early misogynists?” one of them cracks. But they know that’s not it. The divine feminine sacrificing part of themselves so that their fertility enables the world to continue is a motif that threads through indigenous lore of the Southwest from the unnamed ancients to current Pueblo and Navaho tribes. 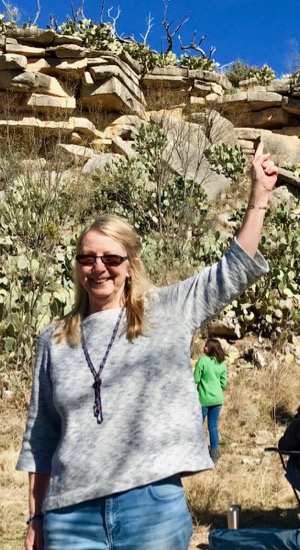 GSDFW reporter Amy Martin points to the sun dagger behind her on the rock. Courtesy of Amy Martin.

More tantalizing light and shadow phenomenon emerge and disappear. The anthropologists mention that on equinoxes a moving shadow beneath the figure of a man makes him seem to walk uphill. Plans are made to return.

What must the ancient gatherings been? Were there ceremony and music, priests and processions, mad astro-scientists scrambling on slopes helping artists find the perfect place for pictographs? Do the slashes of red ochre paint tell a story known only to the long dead?

To stand where thousands have for millennia, on a Winter Solstice day when people worldwide gather for ritual and community, to experience primal art and its timeless tales. The land never forgets. And neither will I.

About: Guided tours of The Painted Rocks, a Native American historical site.