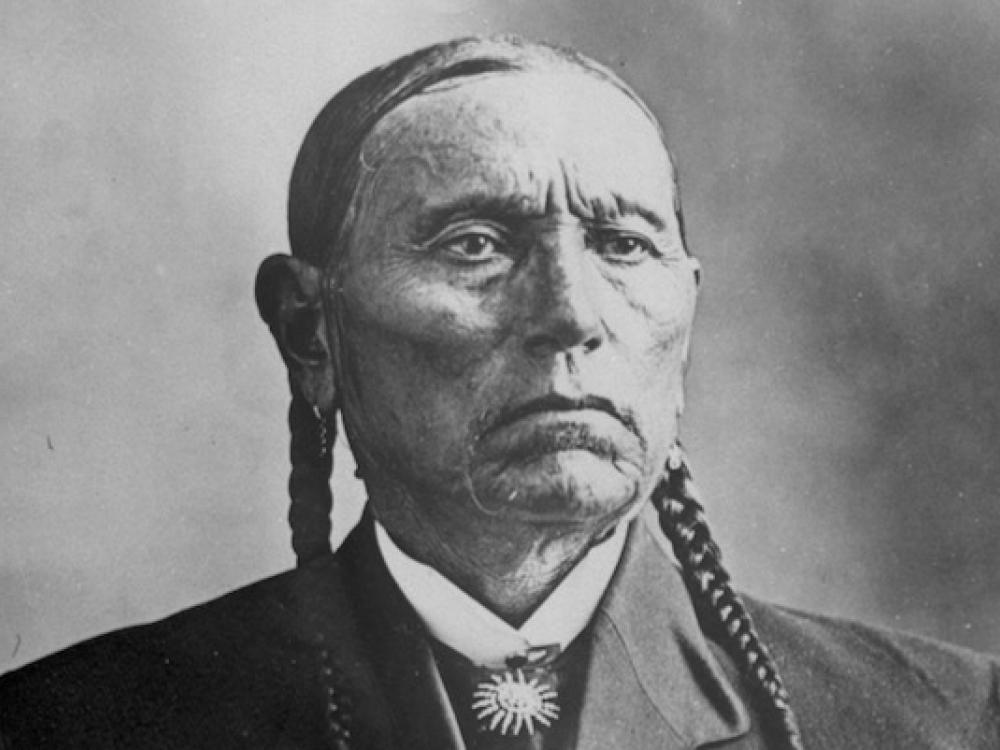 Quanah Parker portrait, circa 1910. Fort Worth native Lance Tahmahkera, the great-great-grandson of Quanah Parker, is the keynote speaker for the Green Source Awards on Nov. 18. Photo courtesy of Special Collections, UT Arlington Libraries.

Comanche life and how it respects community and venerates nature will be the topic of the keynote address for the the 10th annual Green Source DFW Sustainable Leadership Awards for 2021.

Set for Thursday, Nov. 18 at 6 p.m. the virtual awards event, via the internet conferencing platform Zoom, will feature Lance Tahmahkera as the keynote speaker.

Born and raised in Fort Worth, Tahmahkera is the descendent of Cynthia Ann Parker and her son, Quanah Parker. Quanah was the legendary chief who led the Comanche tribe through a process of assimilation in the land they once dominated. They envisioned the tribe’s descendants living a successful and peaceful life as dual citizens of both the Comanche Nation and the United States of America.

Tahmahkera begins his public speaking events with the story of the Parker family. In the mid-19th Century, they built a fort in the Mexia, Groesbeck area south of Dallas with the sole intention of converting the region’s Comanches to Christianity. The Comanche warriors, however, weren’t inclined to accept such a one-sided attitude toward their culture nor the total relinquishment of their beliefs and identity.

“In 1836, some 200 to 300 Kawaii Comanches attacked the fort,” Tahmahkera says. “We killed five people. We took five captives and Cynthia Ann was nine years old at the time. She was taken along with her little brother John and I believe James. When we stole children, we raised them as Comanches just simply to replenish numbers.” 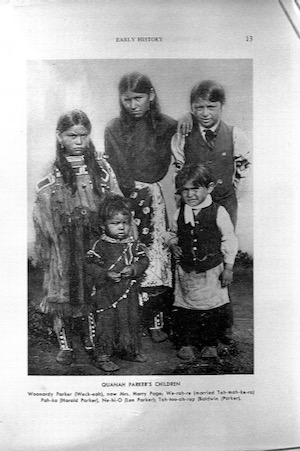 The children of Quanah Parker. “The tallest little girl on the back row is my Great Grandmother, Weyote,” said Lance Tahmahkera. “She was a sweetheart and loved us kids as much as she loved Crackerjacks.” Courtesy of Special Collections, UT Arlington Libraries.

Her oldest son Quanah became the leader of the Kwahadi band of Comanches. And they were the last band to surrender out on the plains in 1875, Tahmahkera says.

The story of Cynthia Ann and how she became a Comanche is still a lively topic in Texas history schoolbooks to this day. She was recaptured some two decades later by her family. However, she died heartbroken by the separation she felt to the tribe she came to know as her own. Cynthia Ann married Comanche Chief Peta Nocona. They had a son together who grew up to become the legendary Quanah Parker, Tahmahkera’s great-great-grandfather.

“She’s three greats. He’s two,” Tahmahkera quips about his place in the lineage. “Her being a blue-eyed blonde girl and raised as a Comanche —it’s a fantastic Texas frontier story on its own.”

Tahmahkera says the transition that Chief Quanah facilitated was enormous. The Comanches were a nomadic community that lived wherever the buffalo roamed and sustained themselves with what nature provided. Chief Quanah saw that to live in coexistence with the people who’d conquered North America, the Comanche would need to blend in and ultimately become house-dwelling families that reported to work, obeyed the laws of the new nation, and sent their children off to school each day. 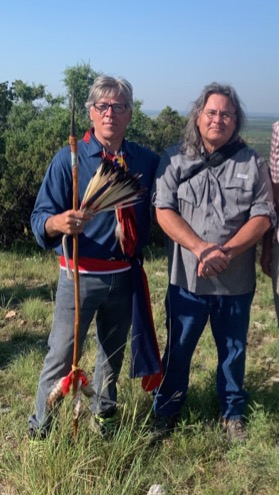 “We were warriors, and we followed the buffalo. So we were nomads constantly on the move, following where the buffalo went," says Tahmahkera. "We survived on that lifestyle. At the time, the father of a child, he would be the hunter, he would be the warrior out there protecting the tribe or off on a hunt, hunting for food. The mothers, they’re the ones that cooked the food, took care of the camp. It was the grandparents that basically raised the child because the two parents were busy working. The whole tribe saw to the well-being of a child — it was communal. Everybody looked out for the welfare of the child. These days, it’s a family unit living in a house.”

Illustrating the transition from nomads to modern Americans that Chief Quanah brought about, Tahmahkera says his father attended Indian boarding school and that he himself was the first generation to attend public school. Whereas his father came to learn English as a foreign language while off at boarding school, Tahmahkera’s first language is English. In his family, Tahmahkera was the first descendent who fully realized the assimilation that Chief Quanah prescribed.

Tahmahkera’s family held onto Comanche traditions though and attended powwows whenever they could meet up with the tribe. Tahmahkera says he became a sort of unofficial family archivist of the family’s cultural property, which he’s happy to show audiences at his many public speaking events. 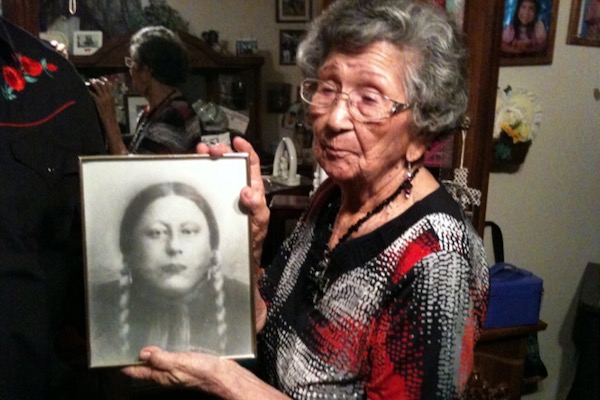 As a Comanche, Tahmahkera holds a veneration for veterans and his ancestors. To veterans, he feels we owe a debt of gratitude for the safety and peace we can take for granted. Our ancestors have passed down to us the knowledge we need to thrive. He also believes that civility and respect for one another should be among everyone’s principal pursuits and that the Comanche regard for the well-being of the entire community is a value that could heal a nation that seems insurmountably divided by faction.”

“The importance we place on not losing our culture — we hold on to it dearly. Respect in America, we just see a lack of respect in nearly every direction,” he says. “In our tribe, we respect our elders. We respect our customs. We follow those customs. We don't just make it up as we go along. And we share our customs with our younger people so that they can continue our ways.”

As to his keynote address during the Green Source DFW Sustainable Leadership Awards for 2021, Tahmahkera says he’ll speak about the Comanche way of life, the tribe’s respect for nature and how the Comanche helped in bringing the American bison back from the brink of extinction. He’ll also share what he knows of the Comanche medicine mounds near the Texas Panhandle just south of Chillicothe, Texas. Finally, he’ll delve into the significance of the eagle to the Comanche people.

Tahmahkera will speak about the Comanche way of life, the tribe’s respect for nature and how the Comanche helped in bringing the American bison back from the brink of extinction.

“Our respect for Mother Earth — like the Navajo say, they call it Mother Earth, Father Sky. Pretty much all the tribes have a very close relationship with our Earth. Down in the bottom of the Grand Canyon, the Havasupai live down there in their reservation, and they talk to the walls. They talk to the rocks like they believe those are living entities,” he says. “We never killed more buffalo than we needed. We just found that balance. Our tribe, like many other tribes, just believe that life is a circle.” 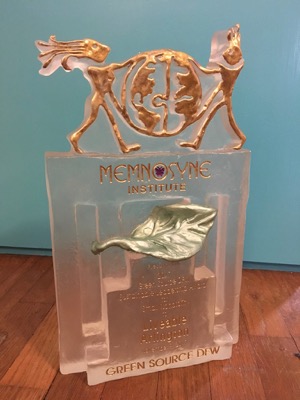 About: The annual awards, hosted by Green Source DFW and the Memnosyne Institute, honors outstanding leaders and volunteers in the North Texas green community. Sponsors are Dallas College and John and Margie Haley.
When: Thursday, Nov. 18 at 6 p.m.
Where: Zoom. Join here: https://us02web.zoom.us/j/89938890605
Keynote Speaker: Lance Tahmahkera, the great-great grandson of Comanche Chief Quanah Parker, will share stories of his ancestors and his Comanche heritage.
Cost: Free
Info: Julie@GreenSourceDFW.org
Website