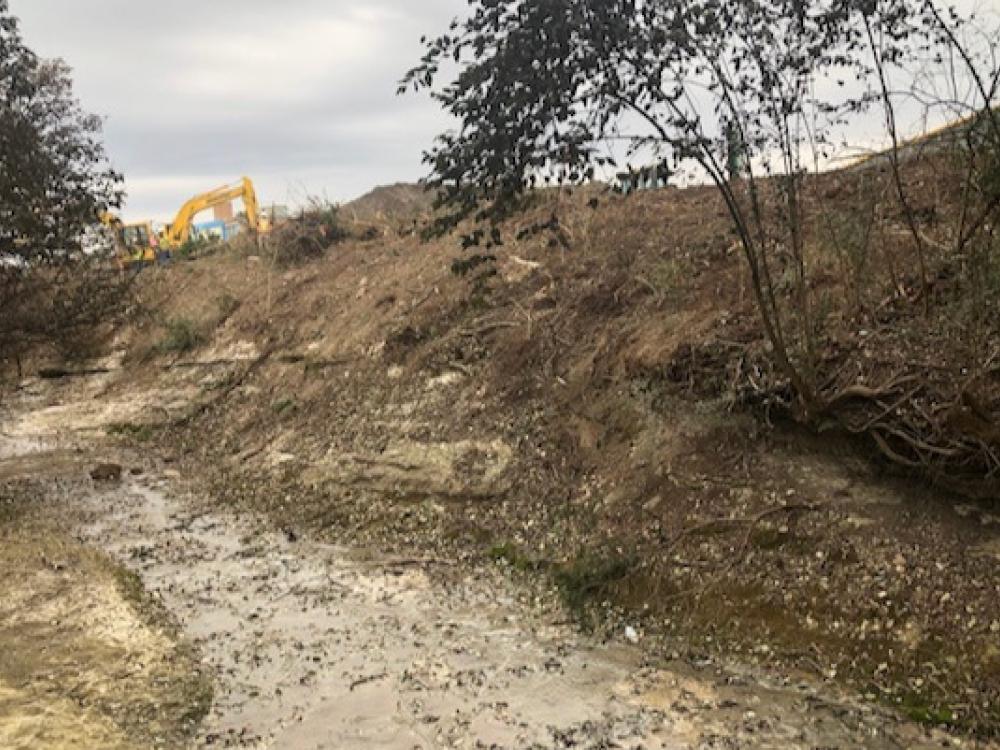 A beloved neighborhood waterway, known as Ash Creek, flows with mud after the bank is cleared by backhoes during renovation at Bryan Adams High School in Dallas. Photo by Kristi Kerr Leonard.

Like many of her neighbors, Kristi Kerr Leonard bought her home for its access to a little bit of wildspace in the city.

Her property backed up to a headwater branch of Ash Creek, which coursed through a tree-lined riparian corridor in East Dallas.

Gazing at the scenic view ringing her backyard brought solace during the protracted passage of her parents and isolation during Covid. She'd even she'd dubbed her abode The Creek House.

But one day in February 2021, she returned home from a funeral and heard an immense crash behind her home.

She rushed to the rear windows to witness backhoes felling trees across the creek.

"I will never forget the image of huge trees crashing into the creek, then being drug back up to the pile on top," said Leonard.

By afternoon's end, backhoe operators had scalped 650 square feet of plant life. The towering American elm and elder bois d'arc were gone. So was the underbrush that once held the slim layer of black soil onto the limestone shelf. 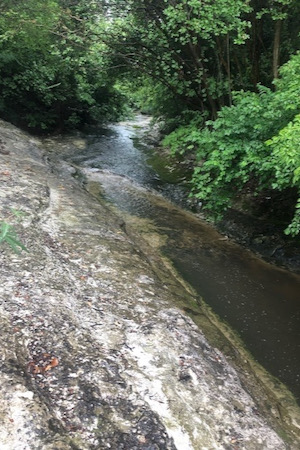 Ash Creek before the destruction. Photo by Kristi Kerr Leonard.

The incident wounded Leonard to the core.

"I have always been a creek kid," she said. "I grew up on Crow Creek off Five Mile Creek in Oak Cliff. We spent countless hours building forts, rock skipping and observing snapping turtles, snakes, owls and frogs. I know the magic and healing creeks bring to one's soul."

It turned out SEDALCO Construction Services, a DISD subcontractor for the upgrades to the nearby Bryan Adams High School, was denuding the creek bank in preparation for a retaining wall on the edge of the steep creek bank.

According to the Lakewood Advocate, the construction was part of a $69.28 million renovation to the school.

But National Resource Conservation Service, a U.S. Department of Agriculture agency, and others dedicated to riparian health, recommend keeping construction 10 or more yards back from a creek edge. Thick greenery between the creek and concrete slows, absorbs and filters stormwater sheeting off pavement and sports fields.

"We selected homes here because of the creek's natural features," said Leonard. "The destroyed trees were a screen between our properties and the very loud and brightly lit high school. Now that has been removed, reducing our property values. Increased erosion will also make our homes less valuable."

Once the shock subsided, Leonard went into mama-bear action mode. She would settle for nothing less than full restoration of her creek. Here's how she did it.

Step 1: Reach out and gather information and advice.

The clearcutting happened on a Thurday. Leonard texted an alarm to the neighbors on her creek cul de sac. She and Flo Shaffer quickly drove to the construction site to express alarm and gather contact info from SEDALCO.

In a rainstorm that night, the creek ran dark grey with silt washed from the bare bank, carrying school and construction site trash that used to get caught in the greenery.

Leonard stayed up past midnight, writing emails and contacting everyone she knew who could help. A gregarious type who lives for networking, she had a lot of contacts. A lot. As a friend, I was one of them. 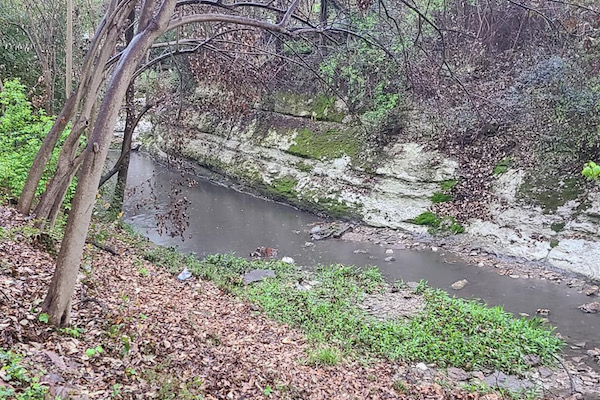 Businesses and municipalities give complaints more credence when backed up with facts. So Leonard sought out experts. A primary focus was government experts at Texas A&M AgriLife Extension and National Resource Conservation Service, plus knowledgeable naturalists and native plant pros. She requested site visits and advice on the environmental impact and potential solutions.

HOW TO RIGHT A WRONG: ACTION GUIDE

Step 2: Convey your concerns to the right people in a clear way.

Leonard's advice: General complaints go nowhere, especially if conveyed only on social media. Determine and contact the people who can make decisions and take action. Be clear, concise and polite with your concerns.

Thursday night, Leonard filed 311 reports about creek damage and erosion through the OurDallas app and texted her neighbors to do the same. The reports put the creek damage into official City of Dallas records.

A colleague solicited by Leonard helped her locate the name and email address of the most influential person to email concerning the construction incident. She made sure that her communications hit the essential points in an organized fashion:

• How she and her neighbors were negatively impacted:

- Personal intrusions such as sound, light, trash or traffic.

- Play areas for kids and the young at heart destroyed.

• How the environment was damaged:

- Habitat concerns like lack of food and cover for wildlife. 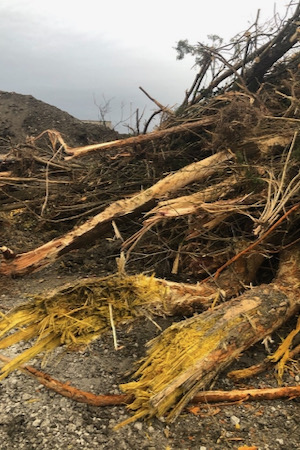 The remains of a decades old bois d’arc that was popular play spot for kids. Photo by Kristi Kerr Leonard.

On Friday, the first to reply to Leonard's email was Brent Alfred of DISD Construction Services, which oversees SEDALCO on the Bryan Adams project. All agreed on a date for an on-site meeting with Leonard and neighbors the following Wednesday. Silt fencing, albeit inadequate, was installed.

Step 3: Get on record and accessible through meetings, media and social media.

That Sunday, Leonard hosted an informal gathering for about 35 folks in her backyard, diagonal from the damage, collecting information and stories of residents' relationships with the creek. Five DISD representatives and Blackmon were in on the discussion.

Leonard took photos and videos and collected more. By the end of the day, she had:

• Obtained an email address for that identity. 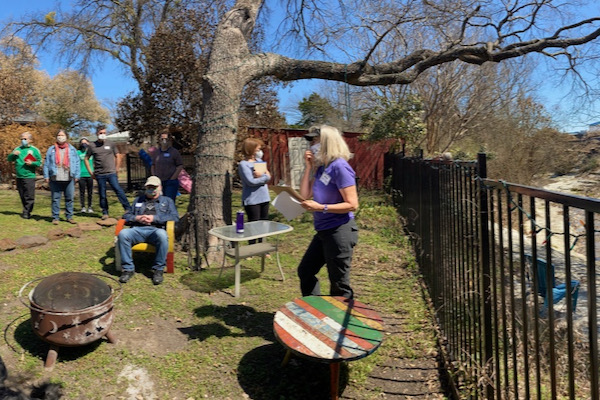 Nearly three dozen neighbors showed up for a meeting about the creek destruction. Photo by Stalin SM.

Leonard began posting about the creek bank destruction to those and other Facebook groups like Casa View Haven Neighborhood Association, East Dallas Greater Good and the members' group for North Texas Master Naturalists, like herself.

Information started to flow to Leonard, including a copy of the water-quality permit that the construction company obtained from Texas Committee on Environmental Quality. A neighbor filed a formal complaint with TCEQ. 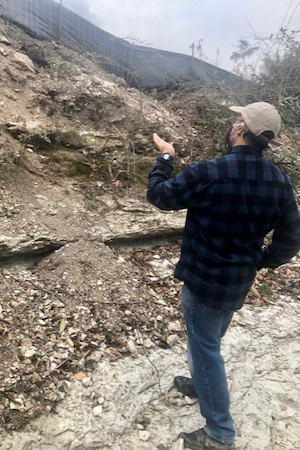 Fouad Jaber of Texas A&M AgriLife Water University points to the creek bank, which he notes was cut too steep by the contractors. Photo by Kristi Kerr Leonard.

BOOTS ON THE GROUND

Since not everyone uses social media, and the creek bank's damage impacted those beyond her block, Leonard hit the streets. A donor paid for 20 Save Ash Creek yard signs. They became so popular that many more had to be printed, reflecting intense community interest. A GoFundMe campaign and neighbor donations covered the printing costs.

Leonard created and printed more than 100 color fliers. Neighborhood walkers distributed them at houses adjoining Ash Creek upstream and down. Most importantly, she and the walkers talked with neighbors to share their concerns, all of whom responded positively.

Word got out to folks who'd been a creek kid like Leonard but on Ash Creek:

"They would beg to come see. They literally cried in the creek and told me stories of playing as children, hanging out as adolescents or crossing to and from school."

With Bryan Adams being a closed construction site, Leonard's yard offered the easiest access to the creek and ability to view the restoration process. Since she offices from home, she endured constant work interruptions as elected officials, restoration consultants and others came by to monitor. 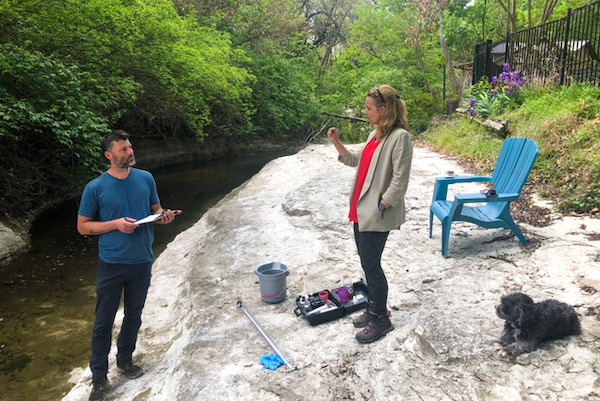 "I followed them all and asked questions," said Leonard, offering cold water, towels and first aid for any creek exploration incidents.

A most welcome visitor was Tony Adler, a monitor volunteer from Texas Stream who now tests Ash Creek for water quality monthly.

Step 5: Stay on top of the situation.

Destruction is easy. Restoration is hard.

The creek bank was a mess, shot through with ragged dead branches and roots. The soil was raw and exposed, ripe for erosion. Wanton backhoe work had ripped out chunks of soft limestone that crashed into the creek, damming seeps that provided vital water. 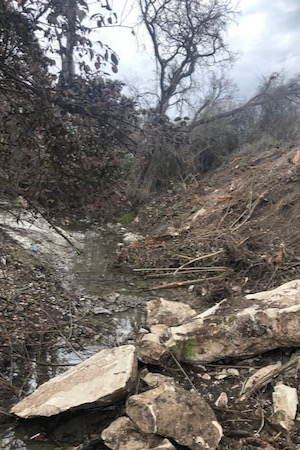 Debris from the backhoe rampage was left in the creek, covering vital seeps. Photo by Kristi Kerr Leonard.

Within two months, SEDALCO announced that a water engineering firm, Cardinal Strategies, had been hired to restore the creek bank, with Jerry Sanders, head of Cardinal's Construction Services division, as manager. When engineers and architects mess up on managing construction-site water or a waterway is crumbling under development pressure, Sanders steps in. It's not cheap.

Before Cardinal could start to dig in, the topside work needed to be complete. Backhoes had dredged soil from the creek bank to create a level surface for a parking lot. This mandated a significant retaining wall to hold the dirt in and giant piers to hold the wall in place lest it slides down the steep slope. 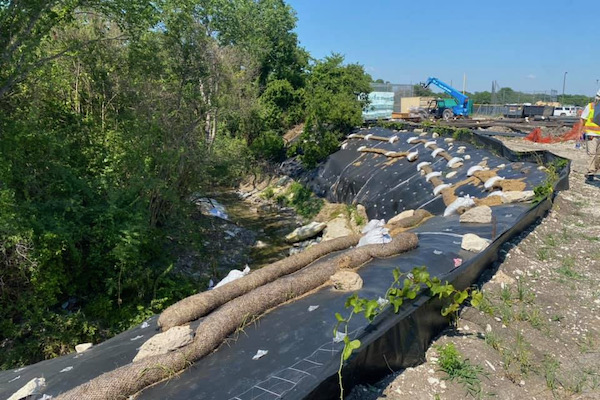 Temporary creek bank stabilization brought relief to the situation, with boulders removed from the creek holding things down. Photo by Kristi Kerr Leonard.

Summer dragged on with little forward motion. Delayed supplies, difficulty obtaining concrete and downpours in May and June all postponed retaining-wall construction. The spring planting period passed because nursery plants were not mature enough.

Yet Kristi kept up weekly communications and monthly meetings with DISD construction leaders. She praised their efforts but asked pointed questions afterward in writing and recapped their promises. As an MBA and project manager, Leonard knows that's how plans stay on track.

"Be courteous yet firm," she said.

After the meetings, Leonard acknowledged the participants' efforts and thanked them. She took pictures and videos, sent the construction overseers copies and posted them on social media. Every email and text was filed, every phone conversation was logged.