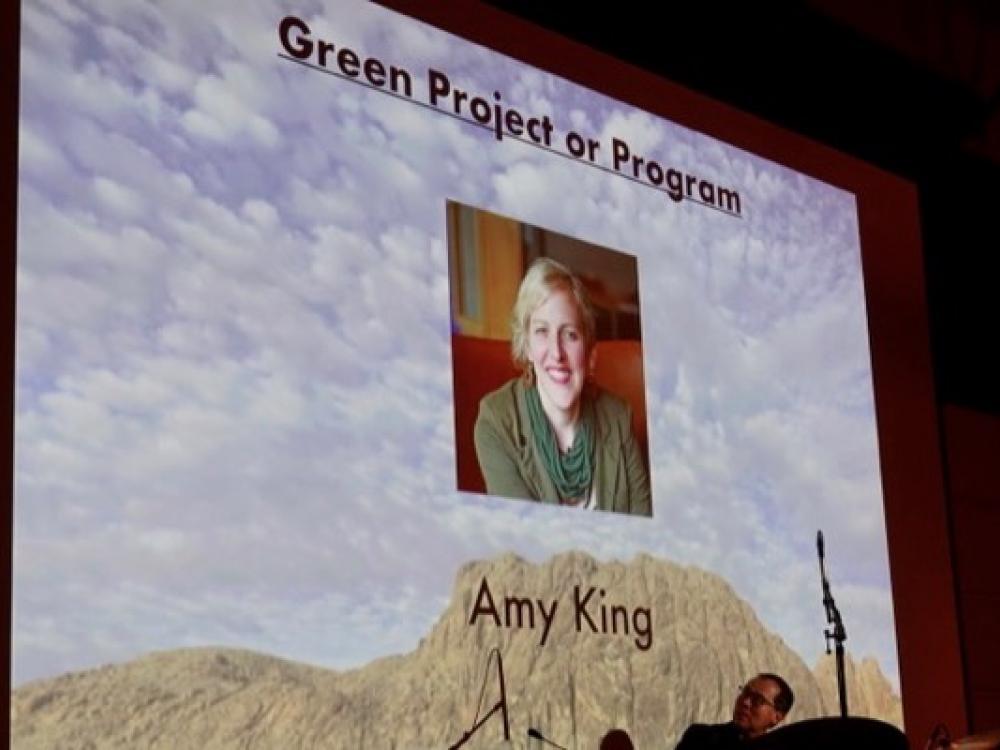 North Texas greenies came out to celebrate those making the Metroplex greener at the Green Source DFW Sustainable Leadership Awards on Thursday night.

The 8th annual event held at the Dallas Arboretum was hosted by Green Source DFW and the Memnosyne Institute, the Dallas-based humanitarian nonprofit that founded the online publication.

The award nominations came from Green Source DFW readers earlier this year. They were then submitted to a panel of judges from the North Texas green community, who had the daunting task of picking winners among an impressive array of green do-gooders. Green Source DFW director Wendel Withrow announced the results to a packed house, representing all facets of the green movement from eco-conscious business owners and educators to master naturalists and environmental activists. 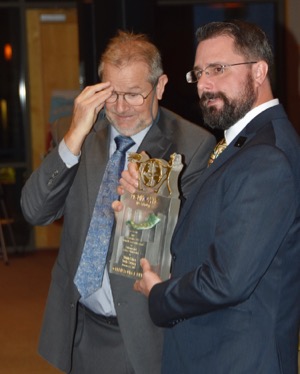 The Environmental Science and Innovation Award went to the Trinity River Turtle Survey. The survey, led by Paschal High School teacher Andrew Brinker, is a 3-year project, funded by a TCU grant and permitted by Texas Parks and Wildlife, the city of Fort Worth and the Tarrant Regional Water District.

For the past two years, Brinker and his students have met monthly to measure, mark and release turtles near downtown Fort Worth. To date they have captured over 1,000 turtles of 7 different species.

The results of the survey will provide baseline data for future studies on how native Texas turtles are faring in the region, especially in view of urban sprawl in DFW. 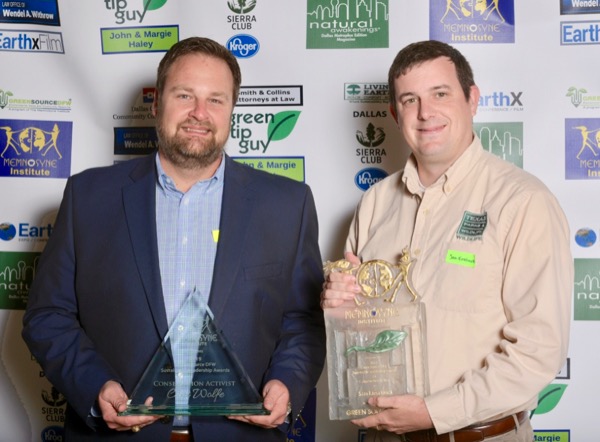 The Conservation Activist Award was a tie between Sam Kieschnick, a DFW-based urban wildlife biologist with Texas Parks & Wildlife, and Clint Wolfe, the founder of Texas AgriLife’s Water University in Dallas.

Kieschnick was an early adopter and enthusiastic advocate of the citizen science app known as iNaturalist. Because of Kieschnick, hundreds of North Texans of all ages now know how to use iNaturalist and why it is such a valuable and fun tool.

Kieschnick has also been the driving force behind many local bioblitz projects. In 2017, he fired up more than 500 DFW nature lovers to win first place in the national iNaturalist challenge, beating out 14 other Metropolitan areas.

Kieschnick, alone, has documented more than 50,000 plant, insects and animal species in the North Texas region, providing an essential baseline for future scientists.

Meanwhile, Texas AgriLife's Wolfe facilitates a team of water resources professionals to assist with research and outreach programming in the areas of water quality, water use efficiency and watershed planning.

Wolfe has established partnerships with more than 40 cities in DFW to conduct educational programs in the fight to reduce landscape water usage, the largest single use of potable water in North Texas. 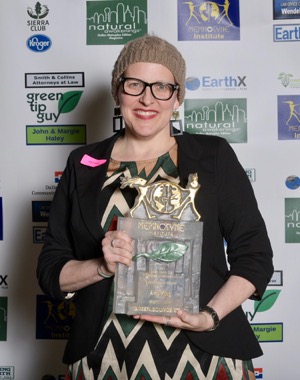 The Green Program or Project Awards went to Amy King, the visionary behind GoodWork coworking in Dallas.

King launched the squeaky green workspace in a LEED renovated building in Dallas in 2018. It was immediately dubbed “the Superfood of CoWorking” by D Magazine.

Today, her solar-powered venue is at capacity with 100 member businesses. Her eclectic clientele are attracted to the building's natural lighting, fitness studio, sit/stand desks and garden courtyard along with educational opportunities on green work practices and green living. 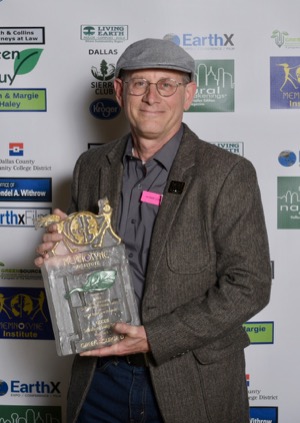 DAY IN THE SUN

Robert Litwins accepts the award for Volunteer of the Year on behalf of the DFW Solar Tour. Photo by Jim West.

The Coke Buchanan Volunteer of the Year Award went to the DFW Solar Tour.

The DFW Solar Tour, hosted by the North Texas Renewable Energy Group, is the largest solar energy tour in Texas. Over the last decade, the all volunteer event has educated thousands of North Texans about solar power and energy efficiency.

Celebrating its 10-year milestone this year, the free annual grassroots tour has grown from a few sites with some of the first solar installations in North Texas to dozens of sites spread out over six North Texas counties.

Each October, as many as 150 volunteers are enlisted to fan out at homes, schools, colleges, businesses and municipal sites across North Texas. 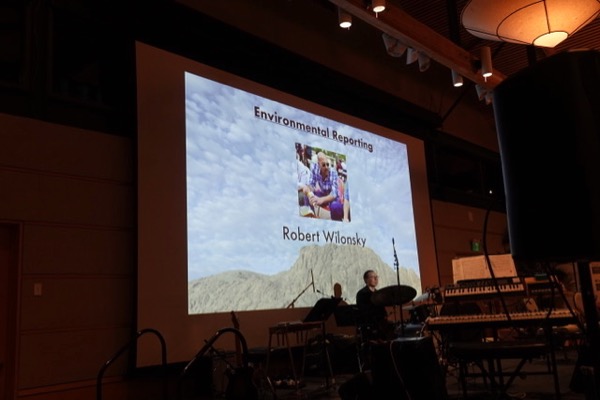 The Environmental Reporting Award went to Dallas Morning News journalist Robert Wilonsky, who was not in attendance.

In 2018, a pile of asphalt shingles started accumulating on property owned by Blue Star Recycling next to Marsha Jackson’s home in south Dallas. Before long, the toxic pile grew 5-stories tall and became known among environmentalists as Shingle Mountain.

Wilsonsky championed Martha Jackson’s cause in a series of articles that helped keep her dilemma in the spotlight and enlist public support. As a result, she fought and eventually won her case in April before a state district judge who decreed that the shingles must move. 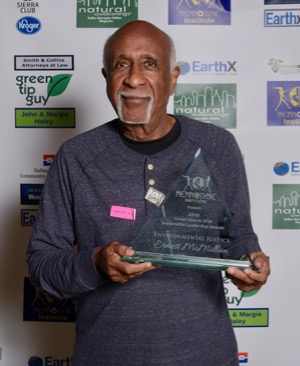 A relative newcomer to environmental causes, McMillan leaped in to organize a 3-day summit with General Russel Honoré, an internationally known author and speaker on disaster preparedness who now focuses on addressing climate change. 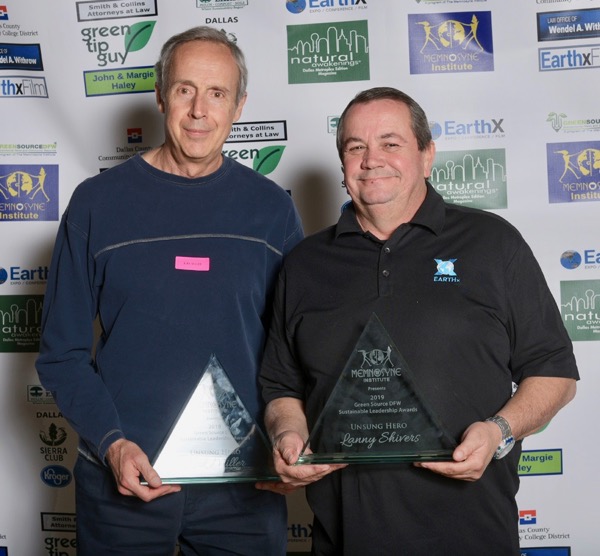 Two unsung heros Kirk Miller and Lanny Shivers get their night in the spotlight. Below, John and Margie Haley won the Founders Award for their support of Green Source DFW through the years. Photos by Jim West.

The Unsung Hero Award went to both Kirk Miller of the Dallas Sierra Club and Lanny Shivers of EarthX for their years of dedication behind the scenes to support their organizations. 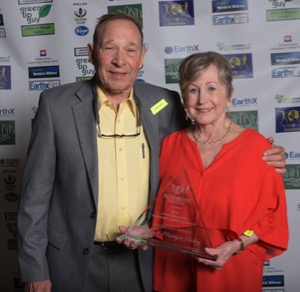 The Founders Award went to John and Margie Haley. The Haleys are longtime funders and advocates for environmental causes in DFW. The Haleys have supported Green Source DFW since its founding. Margie Haley won the Lifetime Achievement Award in 2014.

Over the decades, Rooke has pushed for progressive programs dating back to curbside recycling and has fought against fracking, nuclear waste dumps, bad trade deals and most recently climate change. A clean air advocate, she has testified at countless EPA, TCEQ and City Council hearings. 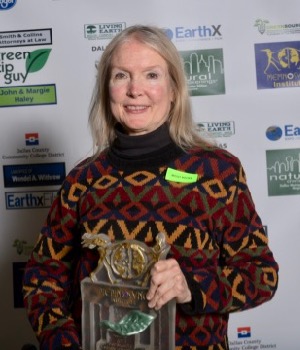 Most recently, she has been working to promote a climate action plan in Dallas and helped organize the largest climate rally in Dallas’s history near downtown.

“The work Molly has done in just the past two years alone is more than many of us could do in a lifetime of activism,” said David Griggs, who nominated Rooke for the award. “Through her more than 30 years of dedicated volunteerism, she sets a shining example for a whole new generation of climate change activists."

The evening ended with a performance by Montopolis, the Austin-based ensemble that combines stories, poetry and history with photos, video and live music. The performances are designed show the beauty and value of native Texas ecological "stars" such as the Big Bend region, so that more people will be inspired to conserve them. 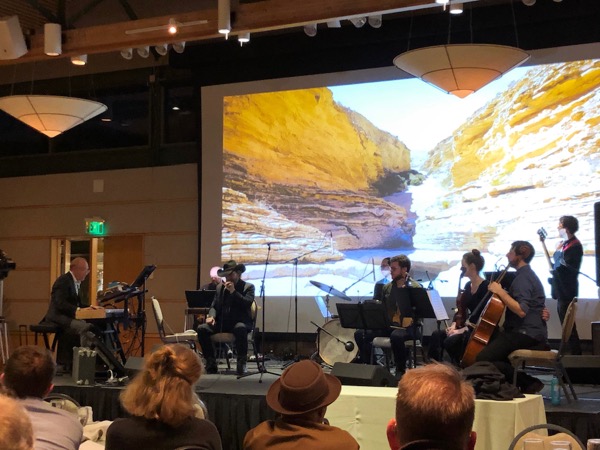