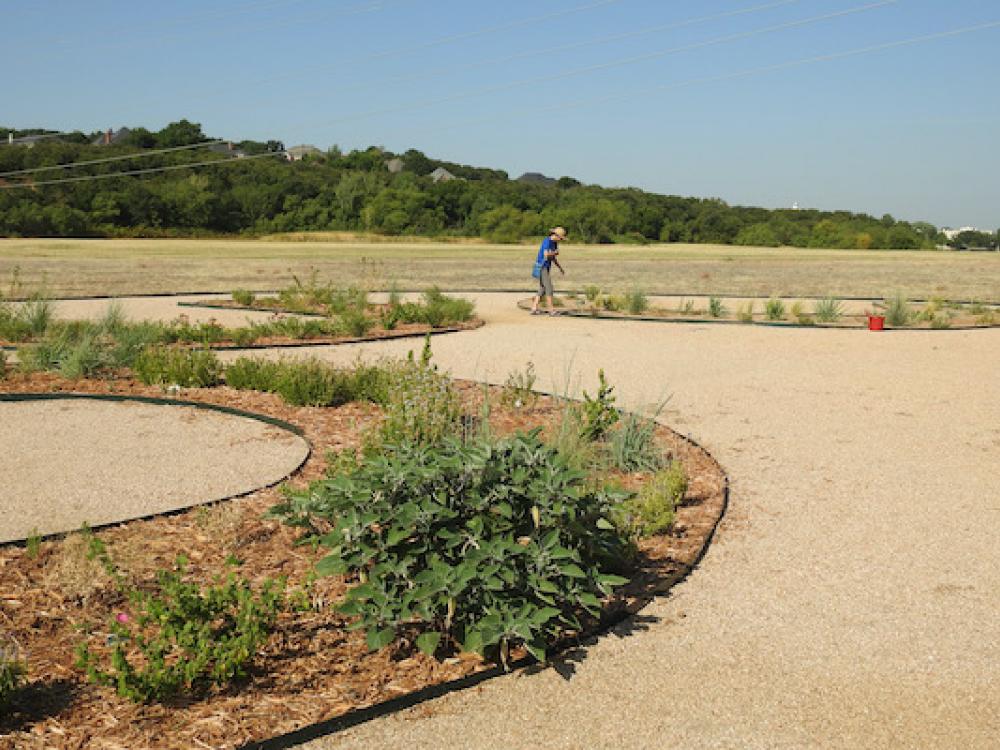 With Texas experiencing the 6th driest year on record, this summer it’s especially important to save water.

According to the National Weather Service, Tarrant County is in extreme to exceptional drought with little rainfall on the horizon. The days that the temperature has climbed to 100 degrees or higher are stacking up.

And North Texans are using lots of water.

Conserving water is more important than ever.

"Up to 60 percent of residential water use in the summer is estimated to be used for outdoor watering," said Dustan Compton, conservation manager for the TRWD, by email. 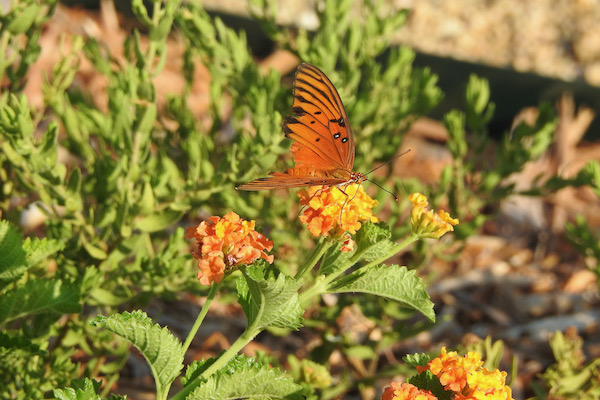 To educate residents on the use of water saving plants, this spring, the city of Arlington unveiled the Lake Arlington Native Plant and Pollinator Garden, a joint project of Arlington Water Utilities, the Tarrant Regional Water District, community organizations and volunteers. Funding was provided, in part, by a $10,000 grant from the Arlington Tomorrow Foundation.

The garden is located on the emergency spillway at Lake Arlington, which cannot contain any permanent structures or trees. The site exists to prevent overtopping of the dam in extreme weather events.

There are really two projects in the works. One is a 400-square-foot demonstration garden that features various native plants, aimed at guiding homeowners in their plant choices for their own gardens and landscapes.

That garden is being carefully tended, with weeding and irrigation by staff and volunteers to help the plants get established during this withering summer.

The other is a planned restoration of 2.75 acres surrounding the garden and next to the Lake Arlington dam. Those acres are being prepared for seeding native prairie grasses and flowers this fall. 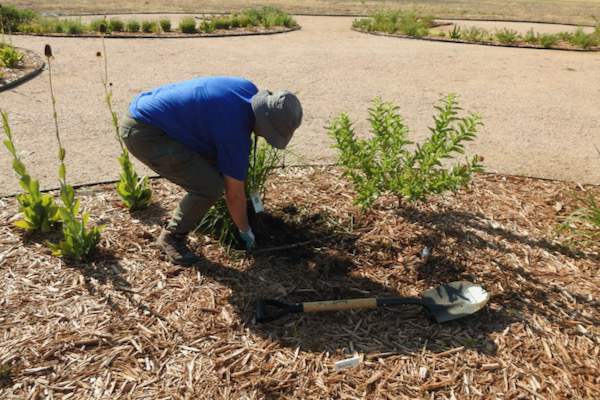 On a recent morning, I visited the new Arlington gardens to see how they were holding up in the heatwave. Traci Peterson, the communications coordinator with Arlington Water Utilities, and Betsy Marsh, the conservation education coordinator for the Tarrant Regional Water District, gave me a tour.

Peterson explained that although the site at 5500 Lake Arlington Drive is behind a gate, it will be very accessible to the public. Currently, it is open on volunteer days the first Tuesday and third Saturday of the month, and members of groups that volunteer to adopt beds of the garden can arrange to come out on non-open days.

The city has plans to bring school groups to visit.

Peterson wants to make it easy for Arlington residents to get ideas for their own planting. In addition to on-site signs, she said she is working on setting up QR codes for each bed so that a visitor can take a picture of the code and get information from online sources. Those sources can show what the plant requires to thrive, its drought tolerance and how it may provide habitat for pollinators and other wildlife. 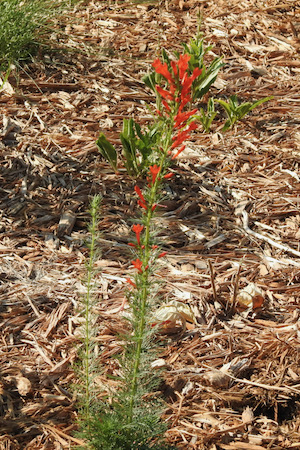 Marsh of the Tarrant Regional Water District showed me the five garden plots within the demonstration garden. Each of those plots follows a theme, with specific plant choices, soil preparation and drip irrigation. For example, the Cottage Garden features perennials with a profusion of flowers and long bloom-times such as black-eyed Susan, purple coneflower and standing cypress.

The nearby Wildlife Garden concentrates on attractive plants that provide habitat for pollinators and other wildlife like green milkweed, gayfeather and little bluestem.

The Traditional Garden is arranged so that rows of coneflower and lantana are behind a strip of buffalograss. Behind that are some low hedge plants. 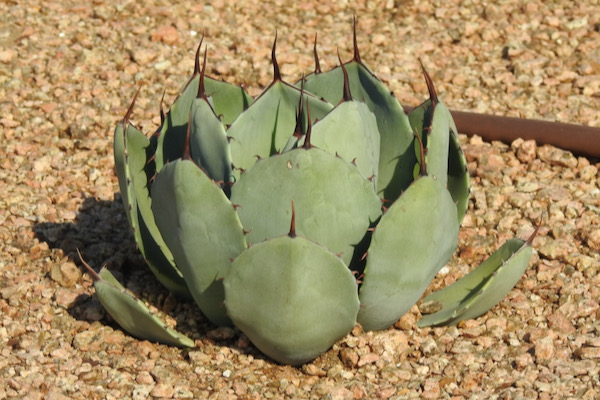 An agave growing in the Xeriscape Garden. Photo by Michael Smith.

The nearby Xeriscape Garden is a microcosm of succulents and other tough plants. When asked about a blue-green agave common in the Trans-Pecos, Marsh noted,

They do prioritize North Central Texas plants in the mix, but she said that including plants from different places in Texas gives more choices for homeowners.

There are a couple of species of yucca, rock penstemon, shrubby skullcap and blackfoot daisy, all desert-adapted plants with beautiful flowers.

“[The Rain Garden plants] are adapted to withstand periods of drought but they’re also well- suited to periods of abundant rain,” said Marsh.

Bushy bluestem, Gulf muhly grass, giant coneflower, and Texas star hibiscus were among the plants flourishing under the blistering sun.

Bushy bluestem, Gulf muhly grass, giant coneflower, and Texas star hibiscus were among the plants flourishing under the blistering sun. 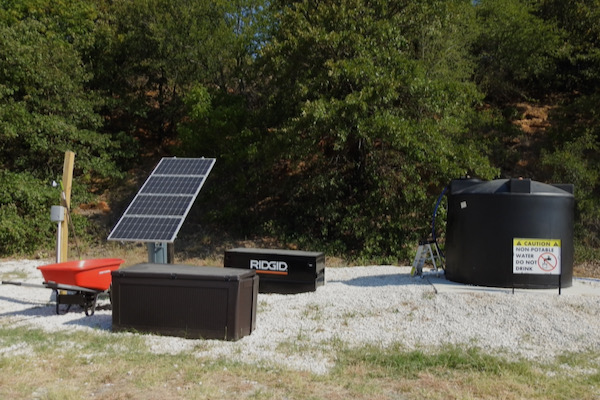 The water tank and solar-powered pump that controls the drip irrigation system waters the garden twice a week. Photo by Michael Smith.

How is the garden surviving in our current drought and heat wave?

Right now, while the plants are just getting established, drip irrigation provides the moisture that they need.

Peterson described how the city tapped into the water line that brings lake water to the water treatment plant, diverting some of it to a 1,000 gallon tank beside the gardens. A small solar panel powers a pump programmed to water the garden two days a week.

The drip irrigation system is ideal for water conservation because it doesn’t spray water through the air where some of it evaporates, and it delivers the water straight to the plants without losing it to runoff. 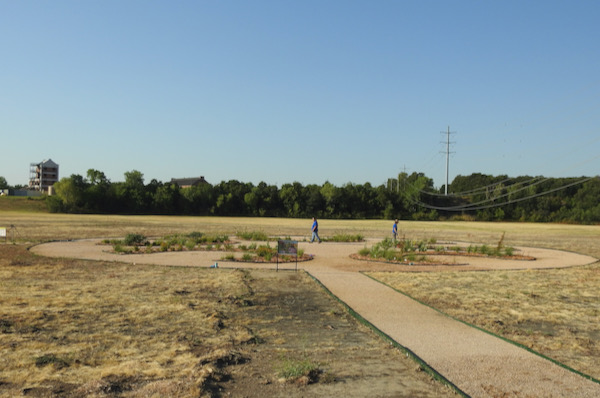 A nearly 3-acre prairie is planned to surround the garden. Photo by Michael Smith.

Surrounding the garden will be 2.75 acres of native Texas prairie grasses and wildflowers. Currently the area is being treated with herbicide to remove invasive, non-native plants. In November, volunteers will use rakes to help create the right conditions to seed the land with a mix of native plants.

The city could supply some lake water if needed, but once established, the meadow should do well with normal rainfall. Marsh said that they do not plan to add nutrients to the soil.

“Experience has shown that adding compost and other fertilizers only adds to the weeds and isn’t necessary to establish native grasslands,” said Marsh.

From a parking area, a concrete trail will spiral inward through the wildflower meadow and bring visitors to the demonstration gardens.

To learn more and plan a visit to the garden, visit savearlingtonwater.com.