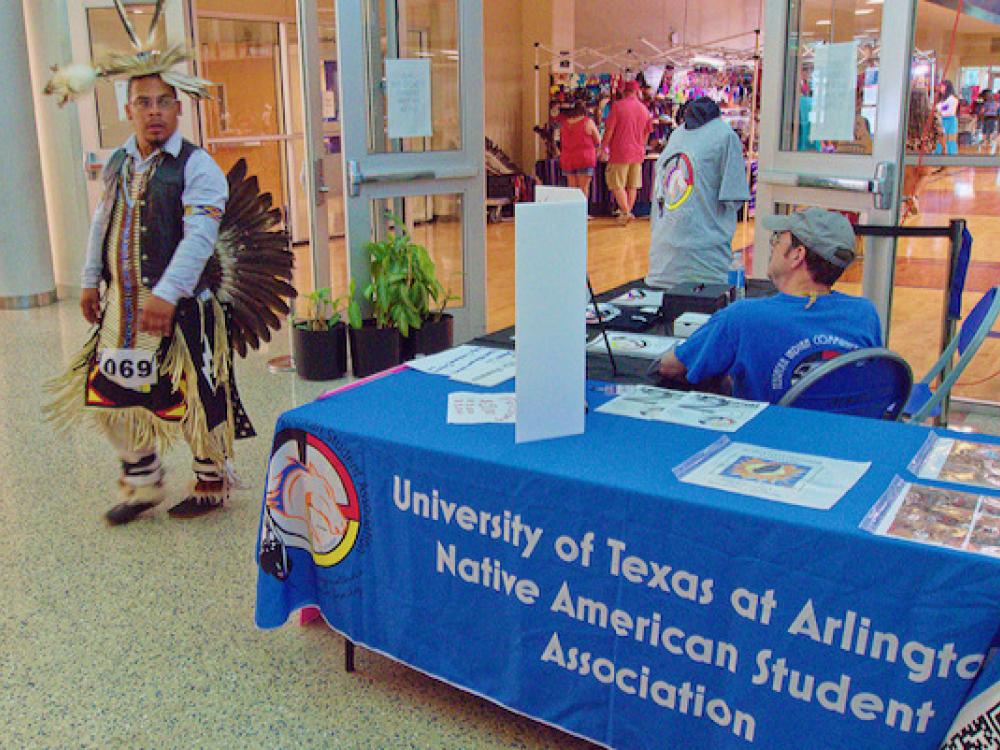 The Native American Student Association held a powwow at the University of Texas at Arlington on Saturday for the first time since the pandemic began. Photo by J.G. Domke.

A popular Arlington powwow returned on Saturday after a more than two-year hiatus.

Hosted by the UTA Native American Student Association, the 26th annual Scholarship Benefit Powwow took place inside the air-conditioned Mavericks Activities Center at the University of Texas at Arlington on June 25.

The 30-year-old student association held its 25th milestone powwow in 2020, just before the pandemic hit. In 2021, the event was canceled but NASA kept meeting online and planning even when the campus was shut down. The powwow, which normally happens in March, was postponed again this year. But with COVID restrictions lifting, the event was rescheduled to coincide with the Summer Solstice.

Other groups in North Texas had booths including the Urban Inter-Tribal Center of Texas, based in Dallas, and the year-old Missing and Murdered Indian Women TX Rematriate group, which is helping get social change “on behalf of all our indigenous relatives.”

During the powwow, UTA president Dr. Jennifer Cowley announced the endowment of a scholarship to Native American students who have been a service to the community.

The event, which typically draws around 2,000 attendees, attracted a diversity of North Texas residents, from students to Native Americans who live in urban North Texas.

“DFW is a melting pot. We have so many different (tribal) nations represented,” says NASA president Sampson Dewey. “It’s just showing my culture. Doesn’t matter how you do it, it’s just a matter of if you do it.”

Dewey, a Paiute majoring in engineering, grew up in Abilene.

Searching for which school to attend, Dewey found an article about UTA’s Native American Student Association. With 12-15 members, UTA’s NASA chapter boasts it is the oldest operating chapter in Texas, going back to 1992.

“I was like, ‘I think that kinda seals the deal,’” he said of his decision.

The student-run UTA powwow is another unique offering and brings the Native American community in DFW together, he said. Other local schools like University of North Texas have NASA groups and celebrate American Indian Heritage Month but only UTA has a powwow. 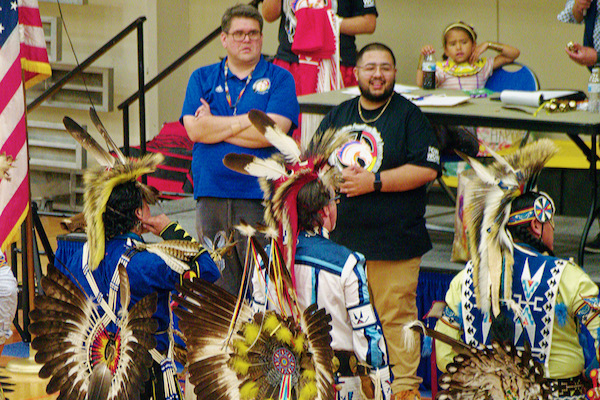 For UTA, the powwow was also an opportunity to boast how earlier this year, the university formally recognized the campus’s ties to indigenous people through a Land Acknowledgment statement.

The recognition acknowledges that the campus is located on the historical homeland of the Wichita, Waco, Caddo and other tribal nations. The tribes’ ancestors resided in the area for generations before being forcibly displaced by U.S soldiers and citizens in the mid-1800s.

For UTA, the powwow was also an opportunity to boast how earlier this year, the university formally recognized the campus’s ties to indigenous people through a Land Acknowledgment statement.

History professor and NASA advisor Paul Conrad said many of inhabitants of this area were violently displaced by White settlers.

Then in the 20th Century, many native peoples returned to the area through the American Indian Urban Relocation Program.

“It was designed to get people to leave reservations and move to cities.”

He says there are a lot of problems with the relocation program, which the UTA’s Land Acknowledgment mentions, but there was also a silver lining.

“It had a side effect of creating a really vibrant native community here in the DFW area,” advisor Conrad says.

Texas Christian University in Fort Worth issued its own Native American Land Acknowledgement in April 2021.

“The Land Acknowledgement helps remind and educate the TCU community about the long and diverse presence of Native Americans who precede and co-exist with our presence in this area,” reads a statement on the university’s website.

The University of North Texas has also posted a Land Acknowledgement statement.

All three universities recognize the Caddo confederacy, who were pushed west by White settlers and settled in the Cross Timbers region along Village and Johnson Creeks near Pantego, a town of 2,300 residents surrounded by Arlington. Legend has it, Pantego is named after the Native American friend of the city’s first White landholder.

Dr. Les Riding-In, Osage/Pawnee, assistant dean and director of graduate programs of the College of Liberal Arts at UTA, remembers getting a call last year from assistant vice chancellor of the University of Texas System, Dr. Nichole Prescott, who is from the Miami Tribe. She encouraged him to pursue Native American recognition on campus.

So he brought together a task force of nine faculty members and NASA president Dewey. They met for the past 10 months and got the Land Acknowledgment approved. They are also installing a garden on campus with a pond, native plants and a planned marker next to the library.

The plaque is being designed by another task force member, Professor Darryl Lauster, director and associate chair in art and art history.

The monument was landscaped by yet another faculty task force member David Hopman, associate professor of architecture, using plants native to North Texas. 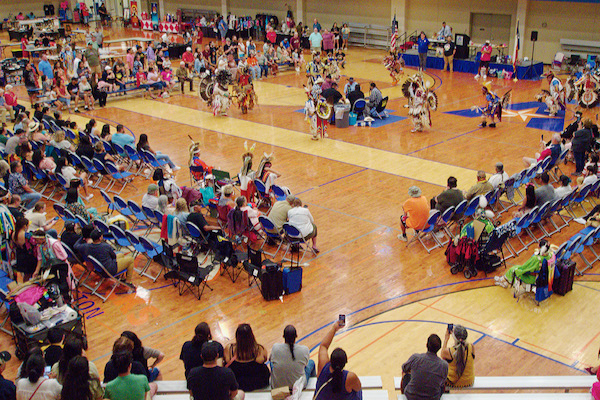 While the Native American Student Association is one of the smallest organizations on UTA campus, it is mighty, said Riding-In, during last week's powwow. He gestured to the gym filled with community members.

“That’s why the Land Acknowledgement is so important,” he says. “People don’t see us as contributing to the community. The scholarship is not just to help Native Americans attend school. The whole idea is to have them integrate and work in the community.”

Retired professor and founding advisor to the group Dr. Ken Roemer, emeritus professor of English, added they also rely on support from the community.

“We couldn’t do this powwow unless we got tremendous community and alumni help” says Roemer.

He also complimented Southern Methodist University for raising awareness with its Southwestern Studies program, which he says brings in speakers from around the country. 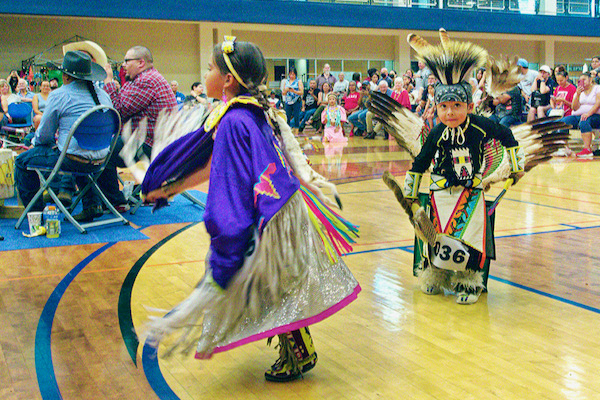 Arlington Mayor Jim Ross marched in the Grand Entry and admitted it was his first time to attend the UTA powwow.

“That’s especially sad since I have Cherokee nation and Potawatomi running through my blood. And the Potawatomi nation gives my daughter a really good scholarship.”

He added, “This is what UTA and Arlington is all about.”

“We are the second most diverse community in the state of Texas and sixth most diverse in the country. Our strength comes from our diversity.”