Fort Worth Prairie Park efforts move ahead despite setbacks 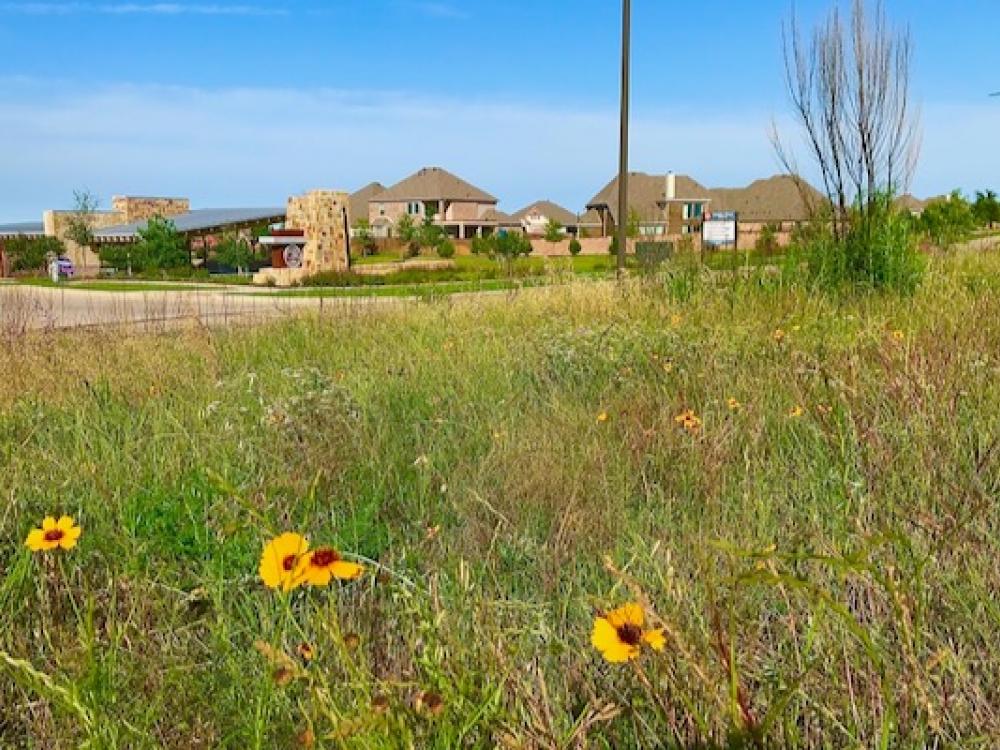 The Chisholm Trail Ranch housing development in southwest Fort Worth is being constructed atop formerly undisturbed Fort Worth Prairie, like the meadow shown in the foreground. Photo by John Kent.

Conservationists in Fort Worth are scrambling to protect an unspoiled remnant of the city’s last remaining native prairie as raging growth and suburban real-estate development threatens to swallow it up.

The land, situated in southwestern portions of the city and its extraterritorial jurisdiction, is home to a broad array of indigenous animals, at least 1,000 native plant species and serves as a waystation for migratory birds and butterflies.

According to the Native Prairies Association of Texas, tallgrass prairie is the most-endangered ecosystem in North America. Prairie remnants not only provide habitat for wildlife, they play an important role in climate change mitigation by helping to slow down and absorb floodwater. They also create a more reliable carbon sink than a forest, according to a UC Davis study.

The local effort to preserve these botanical jewels has met with some significant reversals. But a scrappy patchwork of preservation-minded groups and governmental organizations is continuing to push ahead, aspiring to knit together a mostly contiguous reserve comprising both private and public lands. The City of Fort Worth’s  Open Space Conservation Program, established just two years ago to conserve high-quality natural areas in the city, could play a key role in expanding the wildland nature preserve.

BIG SUBDIVISIONS ON THE PRAIRIE

In 2014, the Texas General Land Office sold a 1,755-acre swath of the unspoiled prairie land near Benbrook Lake to the Walton Group of Companies, a real-estate business and subsidiary of Canada-based Walton Global Investments. The completion of the adjacent Chisholm Trail Parkway toll road that same year, coupled with an insatiable demand for housing in North Texas, had developers seeing dollar signs in the surrounding blanket of grasses and wildflowers. 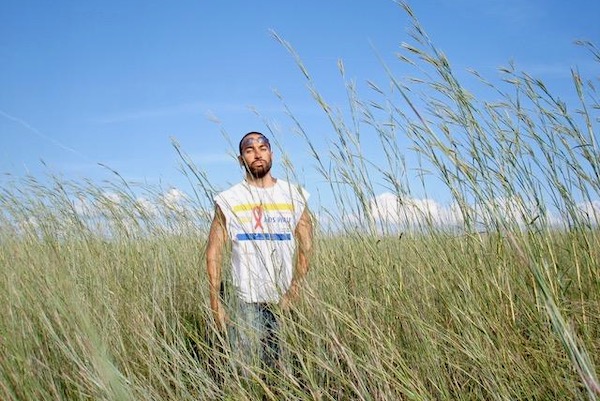 The land in its unadulterated state was described by Great Plains Restoration Council founder Jarid Manos as “some of the highest-quality native prairie we’d experienced in the United States.” The Walton Group has since launched two expansive residential-commercial projects atop that patch of prairie,  Rock Creek Ranch Master Plan and Chisholm Trail Ranch Development. Additionally, Tarleton State University – Fort Worth built a new campus on 80 acres of the Walton-acquired property formerly known as Big Bluestem Hill, named after one of the tall grass species native to the area.

The sale was a gut-punch to conservation groups that were hoping either to purchase some of the land or convince the state not to sell it off. But undeveloped acreage near fast-growing cities like Fort Worth has become so valuable that most environmental organizations can no longer muster the cash to buy it, while private owners and governmental entities like the General Land Office may be hard-pressed not to sell it.

Now, many of the parties interested in salvaging a piece of the prairie are working toward building a federation of such disparate groups, and crafting an arrangement whereby undeveloped land in adjoining and nearby tracts is linked together, creating a sizeable expanse of open wildland. Fort Worth Prairie Park is the umbrella name used to describe existing and targeted park areas, which generally are situated west of Old Granbury Road.

Fort Worth Prairie Park is the umbrella name used to describe existing and targeted park areas, which generally are situated west of Old Granbury Road.

Those parcels are under private or government ownership, with about 1,000 acres of federal property on the east side of Benbrook Lake and Rocky Creek that is managed by the Army Corps of Engineers. The Corps’ land serves as the park’s base, and its pristine prairies were designated Environmentally Sensitive Areas during a recent update of the Corps’ master plan. In 2019, the Great Plains Restoration Council and an alliance of community leaders called the Fort Worth Prairie Park Preservation Committee signed a memorandum of understanding with the Corps to assist in the preservation of endangered prairie, and to participate in community-engagement and education activities. On the west side of the lake is additional Corps of Engineers property that could be added to the Prairie Park.

He describes the Corps’ property as incorporating a variety of ecosystems, including uplands with “native remnant prairie that has never been touched.”

The city leases about 32 acres of Corps land off of Winscott Road, informally known as the Winscott Prairie, that includes a hiking trail through unspoiled native terrain. 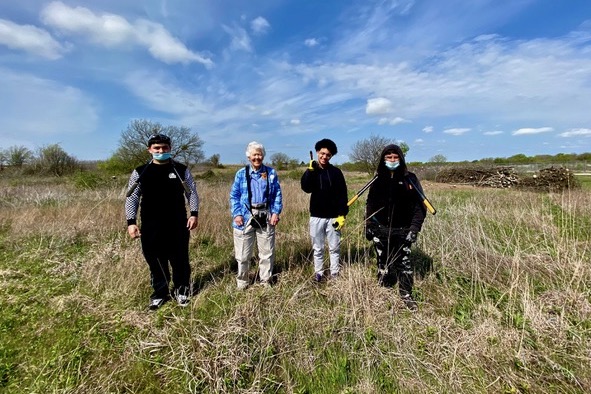 The City of Fort Worth Open Space Conservation Program, which last year spearheaded the city’s purchase of urban prairie land on Broadcast Hill (next to Tandy Hills Natural Area), is engaged with the stakeholders working to move the Fort Worth Prairie Park forward. The program in turn is collaborating with the Trust for Public Land to prioritize areas for conservation.

“We have been discussing the proposed Prairie Park with the Great Plains Restoration Council to identify potential collaborative opportunities to conserve the prairie ecosystem,” said Brandi Kelp, senior planner in the City of Fort Worth’s Stormwater Management Division, which oversees the Open Space program. “In the decision-support tool that the Trust for Public Land is building for the Fort Worth Open Space Conservation Program, prairieland has been identified as a high-priority ecosystem, along with riparian corridors and the Cross-Timbers forest. The tool will help the City of Fort Worth prioritize natural areas for conservation citywide, including within the city’s extraterritorial jurisdiction.”

The Open Space Program’s goals for conservation, which apply not only to the prairies but to eligible land throughout Fort Worth, are ecosystem preservation, recreation, community health, equitable access to natural spaces, flood control, economic development, and the health of streams, rivers and lakes. Stakeholders with an interest in the prairie’s preservation include the Fort Worth chapter of the Native Prairies Association of Texas, the Botanical Research Institute of Texas, the Greater Fort Worth Sierra Club, Cross Timbers Master Naturalists, the Native Plant Society of Texas and the Great Plains Restoration Council, headed by Jarid Manos. He envisions a Prairie Park of at least 2,000 acres and as many as 5,000, with new tracts of land added in phases.

“Development sprawl has exploded, particularly in the opening of the Chisholm Trail toll road,” Manos said. “When you see the monarch butterflies arriving up here from Mexico, coming to the old-growth native Fort Worth Prairie and nowhere else, so tired and worn out that their wing scales have fallen off and they look silver, when you know grassland nesting birds such as the once-common meadowlark are in rapid decline, we know we have to create an ecosystem-protected area large enough to survive and thrive long-term. Nothing thrives only in concrete, including us.” 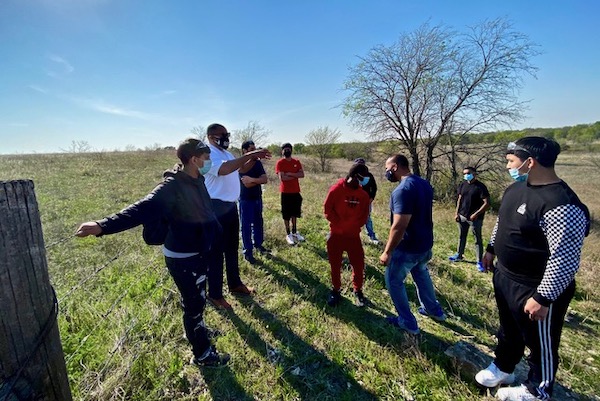 The push to protect the Fort Worth Prairie has pulled in some powerful allies, including U.S. Congressional Representative Marc Veasey, Fort Worth City Councilwoman for District 8 Kelly Allen Gray [who lost to Chris Nettles in the recent election], and Tarrant Regional Water District Board Member Marty Leonard, all of whom have participated in events focused on preserving the prairie’s ancient natural state.

The Great Plains Restoration Council is helping to maintain the Prairie Park areas with help from formerly incarcerated youth and young adults. Manos introduces them to public service, the natural world and self-care through his re-entry transitional employment program called Restoration Not IncarcerationTM. Along with the young adults, the youth, particularly those from partner Tarrant County Youth Advocate Program, provide hands-on help with land-management work to ensure the prairie is not choked out by brush (in the absence of bison and fire), with the aim of restoring the land to its 1800s condition. Manos notes that they receive “much-needed pay and new tools to stabilize and strengthen their lives.”

The Fort Worth Prairie Park’s slow-motion coalescence points to a need for a more fundamental commitment to the local environment, says Jo Ann Collins, a state board member of the Native Prairies Association of Texas and a co-founder of NPAT’s Fort Worth Chapter. “We are slowly being suffocated by development,” she said. “We’re not doing a good job of setting aside prairie remnants that are not developed.”