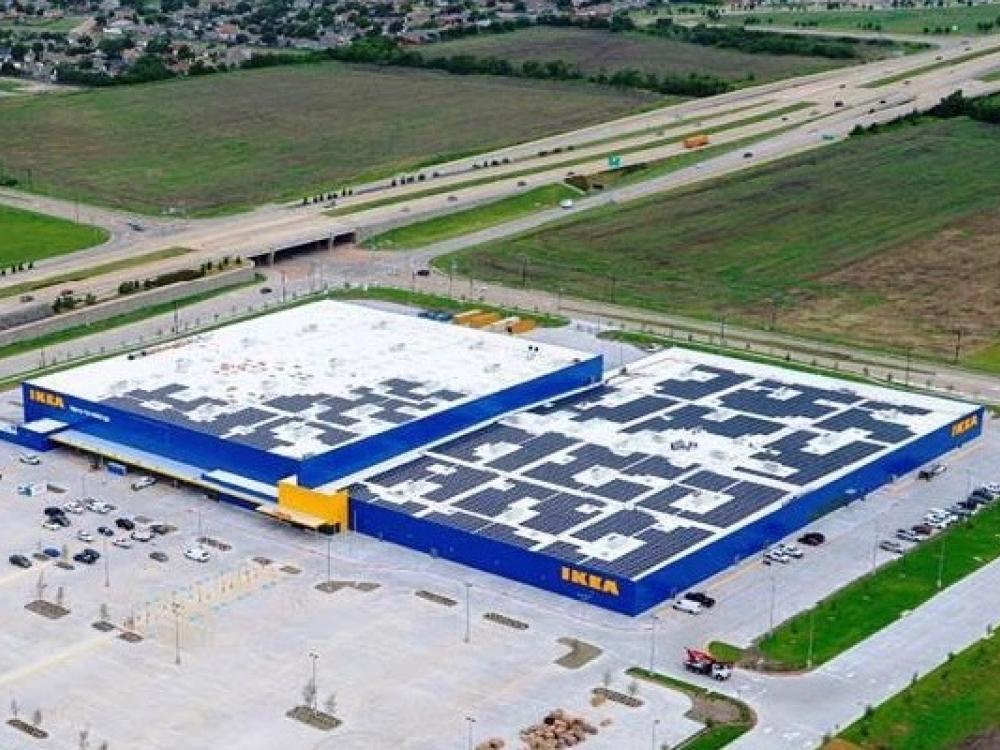 The 2,800 rooftop panels will produce more than half of the store's power.​

North Texas will be home to another solar-powered mega store when IKEA opens a second DFW location at 9 a.m. tomorrow at the intersection of Texas 161 and Mayfield Drive in Grand Prairie.

The 290,000-square-foot building features a 181,500-square-foot rooftop solar array with 2,800 panels. The 1.25 MW system will produce approximately 2 million kWh of electricity annually for the store. It's the equivalent of reducing 1,406 tons of carbon dioxide – equal to the emissions of 197 cars or providing electricity for 208 homes yearly.

The Grand Prairie system, designed and installed by SunPower, will supply about 55-65 percent of the store's energy, according to Hunsicker.

The IKEA Grand Prairie store is the fourth for the Netherlands-based home furnishings giant in Texas, with stores located in Frisco, Round Rock and Houston. The Frisco IKEA features a 114,000-square-foot array consisting of a 912-kW system, built with approximately 3,780 panels. A Fort Worth store is planned to open in 2019.

The Grand Prairie system, designed and installed by SunPower, will supply about 55-65 percent of the store's energy, according to Hunsicker.

This Grand Prairie array represents the 47th solar project for IKEA in the U.S., contributing to the IKEA solar presence atop more than 90 percent of its U.S. locations, with a total generation goal of more than 44 MW. IKEA owns and operates each of its rooftop solar PV energy systems – as opposed to a solar lease or power purchase agreement. Globally, it allocated $2.5 billion to invest in renewable energy through 2020, touting a goal to be energy independent by 2020. According to a press release, IKEA has installed more than 700,000 solar panels on buildings across the world and owns approximately 300 wind turbines, including 104 in the U.S.

Other ways that IKEA make efforts to be sustainable are by recycling waste material; and incorporating energy-efficient HVAC and lighting systems, recycled construction materials, warehouse skylights and water-conserving restrooms. Other goals include eliminating plastic bags from the check-out process; phasing-out the sale of incandescent light bulbs; facilitating recycling compact fluorescent bulbs; and selling only LED bulbs. IKEA U.S. has also installed electric vehicle charging stations at 30 locations. IKEA also makes sure that its vendors use sustainably grown wood and cotton and its exclusive suppliers must adhere to very strict standards.

Even the restaurants at the IKEA sites appeal to a progressive clientele by offering a variety of vegetarian food options, including a vegan version of its famous Swedish meatballs as of April.

Overall, Roth the Swedish company aims to be a green corporate neighbor.