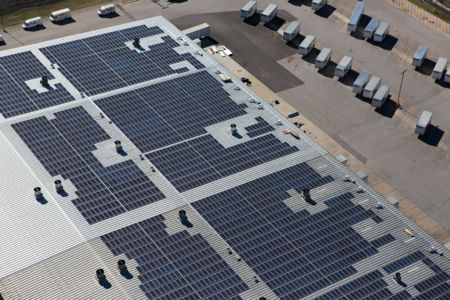 Fed Ex is soaking up the Texas sun at its Dallas-area facility while reducing its carbon footprint, thanks to a new solar installation.

In October, dignitaries ceremoniously flipped the switch on 4,522 solar modules installed at its Ground Hub in Hutchins, south of Dallas. The sun-powered panels, which produce 300 watts each, are expected to offset approximately 20 percent of the facility’s electricity consumption. That’s enough electricity to power 177 homes for a year.

It's the largest rooftop solar system in North Texas and the entire Oncor service area, according to the Dallas Business Journal.

There are two hubs in Dallas and Fort Worth, but Evers says the Dallas site was selected because it is a long-term owned facility within the Oncor area that met a criteria of incentives, roof size, favorable solar production and electric load need.

So excited are local officials about the green move that more than 50 local politicians, business owners and leaders as well as FedEx Ground employees attended the solar dedication ceremony. 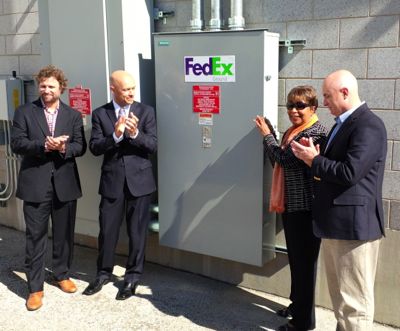 “We are very pleased that FedEx Ground has chosen to make these improvements in Hutchins,” says Hutchins City Manager Guy Brown. “FedEx is a great corporate citizen in our community and this project demonstrates their social and environmental consciousness.”

SoCore Energy installed, owns and maintains the solar system at the Dallas hub, which has other green initiatives too.

“Our goal is to move the needle on all of these initiatives, including expanding the use of solar and alternative energy throughout our network,” said Evers. “We also undertook a major lighting retrofit at our headquarters in the Pittsburgh area that included motion sensors and programmable controls, high efficiency lighting, parking lot retrofits and daylight harvesting.”

Evers adds that overall this effort is being pushed out throughout the entire Fed Ex network. Lighting retrofits are being installed in many of the 560 facilities and at the Rialto, Calif. hub, the company has also installed FedEx Ground’s first Bloom Fuel Cell to add to the current solar panel installation at the site.

For the future, Evers says the Dallas facility, which is in the process of a 100,000-square-foot expansion, has no additional solar panel plans.

“Based on the current regulations of the Oncor utility offering for solar, it is unlikely that solar would be expanded at this facility,” he says.  “Over time, it is possible that this will be reconsidered, and since only roughly half of the roof was utilized for the current solar project, additional capacity could be feasible.”

Summing it up, Paul Melander, FedEx Ground managing director of sustainability, said the company’s commitment to sustainability is evident, given that an entire department is dedicated to driving sustainability initiatives across the organization

“Our system here at the hub in Hutchins is an example of our initiative to expand renewable energy use.”