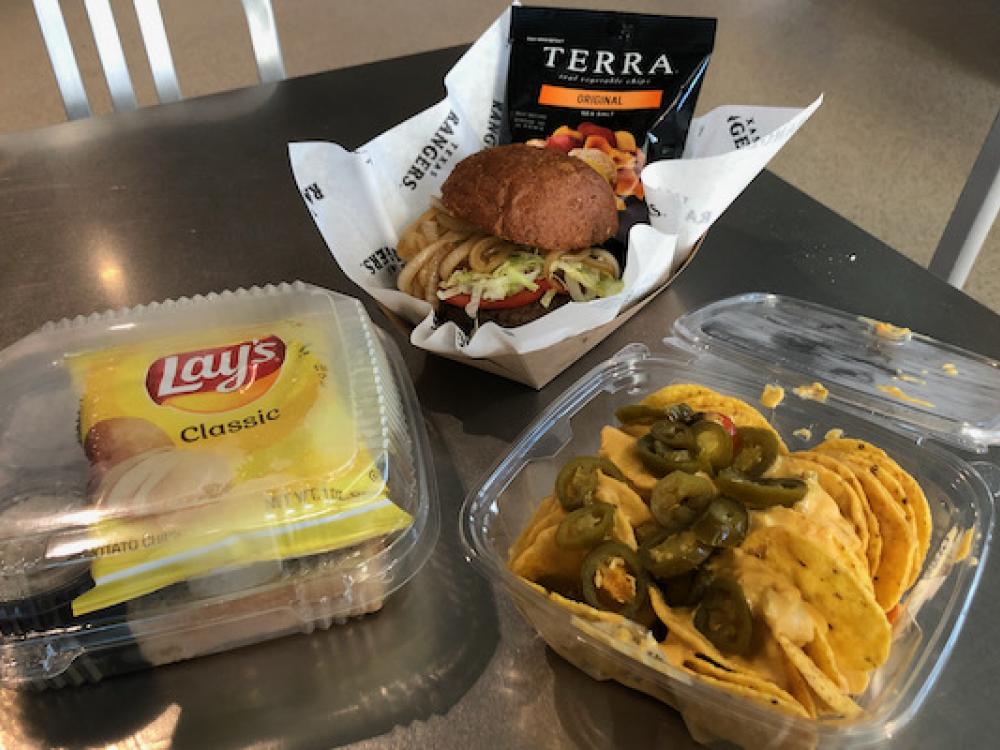 We sampled the plant-based fare during a recent home game in Arlington. Pictured a mock-chicken salad sandwich, veggie burger and vegan nachos. Photo by Julie Thibodeaux.

I am often frustrated when I go to public events and there are few, if any, food choices for those on a plant-based diet.

So it was with great anticipation that I attended a recent Rangers baseball game in Arlington and was able to chow down on some favorite ballpark food classics like hotdogs, burgers and nachos at The Visiting Vegan food stand in Section 101. 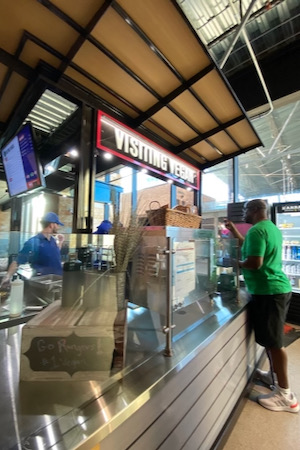 The Visiting Vegan stand at the Rangers' Globe Life Field is located in Section 101. Photo by Andrew Ridout.

This concession was launched in 2016 in the old Rangers stadium and paved the way for vegan fare in Major League Baseball. It was the first full vegan cart in the MLB and the Ranger’s Globe Life Field has even won first place in PETA’s Best Vegan Ballpark several years in a row.

You could say getting plant-based options into the stadium was a team effort, no pun intended. A diehard baseball fan and avid vegan, Twalla Grant, noticed the lack of veggie menu items during her outings to Rangers’ games. She decided to take action to change that.

She began reaching out to Casey Rapp, general manager from Delaware North, the company that provides food and beverages to concession stands at the stadium.

“I befriended Casey Rapp and started emailing him every home stand and in between seasons questioning him and offering suggestions for vegan options,” says Grant, who today oversees the Veggie Texas Rangers Fan Facebook page.

Her campaigning worked and now baseball fans can find a multitude of choices at the Visiting Vegan cart. 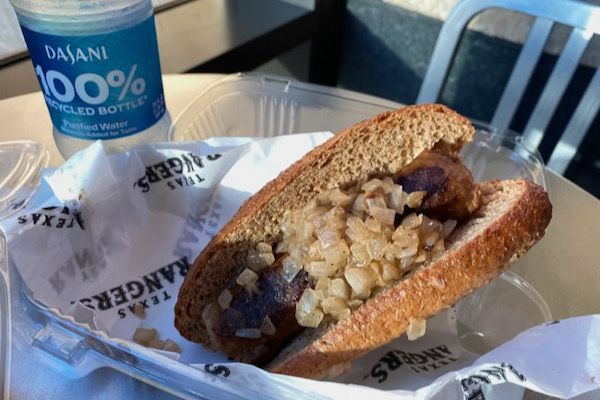 During my recent trip to the ballpark, Rangers vs. Orioles, I got to sample several different menu items from The Visiting Vegan, including their delicious vegan nachos slathered with melted cheese and topped with fresh and spicy jalapenos ($10); a juicy and flavorful vegan bratwurst with grilled onions on a wholewheat bun ($12), one of their classic plant-based hamburgers with cheese ($15), and last but not least, their hearty mock chicken salad sandwich with chips ($16).

Many of the items on the menu are new. 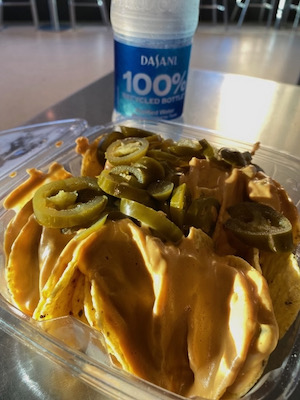 The vegan nachos at Globe Life Field are one of the most popular vegan items. Photo by Andrew Ridout.

It will be exciting to see what they add next.

Other menu items include a veggie wrap ($10) and a fresh garden salad ($10). In addition to their nosh, The Visiting Vegan also offers Karbach Ranch Water, a variety of beers, sodas, water, and more, many in 100 percent recycled and recyclable containers.

The Visiting Vegan is located in the north end of the main concourse, however it isn’t the only vegan option at Globe Life Field. Head down to the lower concourse near Section 4 and you will find Going Going Greene and their delicious plant-based ice cream highly recommended by Twalla.

Rapp relates, “Our Oatly Soft Serve is pretty popular. It’s located at Going Going Greene and in the Skyporch.”

I didn’t have a chance to try it this time but it gives me a reason to go back again soon.

Since beginning serving food at the ballpark, the vegan concessions have not only hit a home run with fans but have also helped the Rangers’ venue spark other MLB stadiums to follow suit. “The Dodgers and the Twins are also doing things as well,” remarked Rapp.