Wastewater will harm popular creek in Fort Worth, groups say 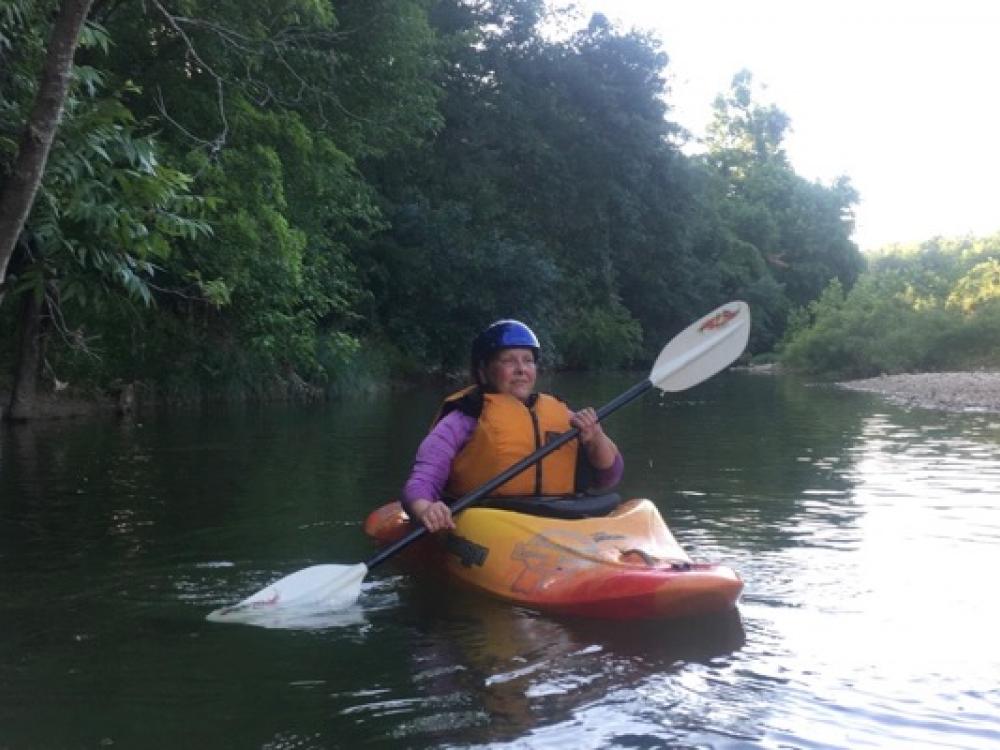 Donna Morgan kayaks along Mary's Creek in Fort Worth on May 28. The City of Fort Worth plans to discharge treated wastewater into the creek from a new water reclamation plant starting in 2026. Photo by Teresa Patterson.

A long-planned water reclamation plant that would discharge treated wastewater into Mary’s Creek on Fort Worth’s far west side is sending up red flags at the Tarrant Regional Water District and within the ranks of local residents and conservation groups.

The concern centers around the effluent’s potential environmental impact, especially downstream along parts of the Trinity River frequented by recreational users.

The city says the worries are unfounded because the wastewater will be highly treated and filtered.

“The city has committed to using state of the art membrane treatment technology with nutrient removal and advanced disinfection capability at the proposed Mary’s Creek facility,” said Mary Gugliuzza, media relations and communications coordinator for the City of Fort Worth’s water operations. 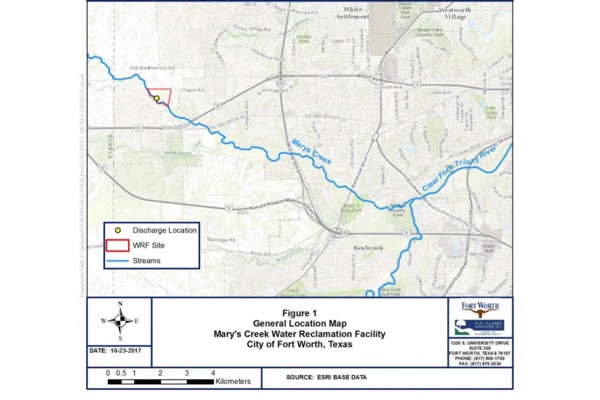 The Mary's Creek Water Reclamation Facility will be built in west Fort Worth on Chapin Road, with a maximum average wastewater discharge of 15 million gallons per day, all of it planned to go into Mary's Creek. Courtesy of City of Fort Worth.

Fort Worth is the country’s fourth fastest-growing big city, and the Mary’s Creek Water Reclamation Facility on Chapin Road, which has been on the drawing board for nearly 20 years, is needed to accommodate ongoing development and population growth along the Mary’s Creek Basin, Gugliuzza says. On March 23, the Texas Commission on Environmental Quality approved a draft permit for the facility and its wastewater disposal plans. Gugliuzza notes that TCEQ undertook “careful and lengthy scrutiny of the city’s application to show the effluent will not negatively impair the quality of water in Mary’s Creek and the Clear Fork of [the] Trinity River.”

TRWD praises the planned facility as “state-of-the-art” and agrees that it must be built.

“The city has done an excellent job on the design of the facility,” said TRWD environmental director Woody Frossard. “Our objection is to the discharge into Mary’s Creek of the effluent once it’s treated.”

On April 22, TRWD filed a protest with TCEQ formalizing the water district’s opposition to the discharge plan, asking that the permit be remanded back to the city staff to resolve what TRWD believes are “a couple of” discrepancies, and calling for a public meeting if the permit is not remanded.

TRWD (the state’s permittee for water throughout Fort Worth) is proposing to build a pipeline at its own expense that would bypass Mary’s Creek and route all of the new plant’s effluent into Eagle Mountain Reservoir, Lake Worth or Benbrook Lake, where it would be highly diluted and added to the area’s water supply. At a maximum daily average discharge rate of up to 15 million gallons per day, the volume from the facility would represent a significant boost to the water supply.

TRWD (the state’s permittee for water throughout Fort Worth) is proposing to build a pipeline at its own expense that would bypass Mary’s Creek and route all of the new plant’s effluent into Eagle Mountain Reservoir, Lake Worth or Benbrook Lake, where it would be highly diluted and added to the area’s water supply

Dan Buhman, TRWD’s deputy general manager, says the city is aware of the pipeline offer. He describes talks between the two groups as being “in the exploration phase.” But Gugliuzza, the city communications officer, says plans to discharge effluent into Mary’s Creek are not currently negotiable.

“Even if the city does move forward with the permitting for a secondary discharge location in the future, we would still need the discharge on Mary’s Creek for a number of reasons, including flexibility, risk reduction, and even water quality considerations, as our research shows the level of treatment provided by this plant will benefit receiving streams,” Gugliuzza said.

Buhman has a slightly different take. “They haven’t said, ‘No, there’s no way that’s going to work.’ They obviously have a preference to go with their current plan. But I think what they’re saying is they’d need some evidence that [the pipeline] is the path to take, which is totally fair,” Buhman said. “I think we see it the same way. We need to make a case that that’s a better path forward. That’s what we’re trying to do now.”

According to Gugliuzza, “The city underwent a rigorous two-year process to show that the discharge would be protective of the environment before TCEQ issued its draft permit. In fact, the TCEQ limit for phosphorus included in the draft permit is considerably more stringent than was requested by the Tarrant Regional Water District in a letter to the City of Fort Worth in August 2019.”

TRWD argues that the city’s modeling that led the TCEQ to approve the draft permit was mostly confined to an area within about a mile of the plant’s discharge point, and that TRWD’s expanded modeling indicates that the nitrogen- and phosphorus-carrying effluent would result in record-setting blue-green algae blooms farther downstream at the confluence of the Clear Fork and West Fork in downtown Fort Worth.

“We have never seen this algae at a higher level than about 40 micrograms per liter,” TRWD’s Frossard said. “Our model is predicting that we’ll see it get up to 60 or higher, and for short periods of time maybe 80 micrograms per liter” in the summer months during low-flow conditions.

The World Health Organization has identified any algae concentration over 50 mg/l as a moderate health hazard that could result in rashes or in gastrointestinal illness if ingested, Frossard said.

Members of the Trinity Coalition, a regional group whose mission is “to transform the Trinity River Corridor into a nationally recognized conservation and recreation area,” are concerned that the discharge will negatively impact recreational areas that are frequented by fishing enthusiasts and the thousands of paddlers and tube-floaters who jam into areas like Panther Island near downtown Fort Worth. The concern is shared by other like-minded groups, including the Texas Council of Fly Fishers International, Federation of Fly Fishers, Fort Worth Fly Fishers, Texas River Protection Association, North Texas River Runners and the Trinity River Paddling Trail Association.

“First, to be clear, none of the organizations we know about oppose the wastewater treatment facility itself. We only oppose the planned location for dumping the treated wastewater,” said Teresa Patterson, Trinity River Paddle Trail manager for the Trinity Coalition. “Especially since TRWD has publicly offered to pay for piping the water to a safer dump site in a larger body of water. We know from our work on our Trinity Coalition Upper Trinity Basin Water Quality Report Card (in partnership with University of Texas at Arlington) project that rivers and streams are already much more susceptible to any bacteria and pollutants than larger bodies of water.”

“First, to be clear, none of the organizations we know about oppose the wastewater treatment facility itself. We only oppose the planned location for dumping the treated wastewater,” said Teresa Patterson, Trinity River Paddle Trail manager for the Trinity Coalition. “Especially since TRWD has publicly offered to pay for piping the water to a safer dump site in a larger body of water.” 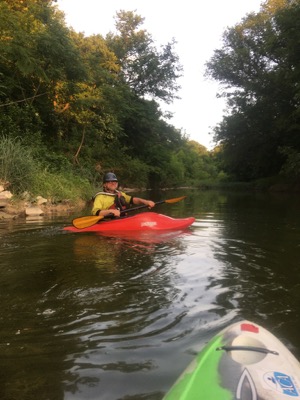 Steve Ford paddles near the Mary's Creek Dam on May 26. The Tarrant Regional Water District is offering to build a pipeline that would shunt filtered effluent from a planned wastewater plant into an area lake, keeping it out of the creek and the Trinity River. Photo by Teresa Patterson.

The Trinity Coalition’s interest in keeping the river clean is also linked to its efforts to make the Trinity River Paddling Trail a National Recreation Trail.

“We are only awaiting the Department of the Interior’s confirmation to get the official designation,” Patterson said.

The Clear Fork, from Rogers Road to the confluence with the West Fork in downtown Fort Worth, is part of the 130-mile trail.

As of June 9, all of the 105 public comments posted on the TCEQ’s website expressed opposition to the Mary’s Creek waste-discharge plan, a sentiment summed up in a comment by resident Blane Hiett:

“I have grown up fishing and playing in this creek all my life. It is a beautiful part of Fort Worth that needs more exposure. Please don’t ruin this for us all. I would love to be able to take my kids here someday to do the same. Please explore other options here.”

Gugliuzza counters that the City of Fort Worth’s record of environmental stewardship is well documented and can be trusted.

“Fort Worth considers water a vital resource. Protecting public health and the environment is what the Fort Worth water utility does every day by providing drinking water and wastewater treatment to the region. The city’s water utility has been recognized by the EPA and national water sector associations for being an outstanding utility,” she said.

If the water district and the city cannot come to an agreement, TCEQ will make a decision about how to move forward with the draft permit. The back-and-forth could add up to 18 months to the process, and push the plant beyond its planned 2026 opening.

TRWD’s Buhman says the two entities are working toward the same objective but are armed with conflicting information.

“Our goal is really very similar to what the city wants, which is to protect the quality of the river, to ensure the public still has the maximum use of this river for recreation and development, that all the good things that we’ve jointly worked on over the past two decades, that those are maintained,” Buhman said.