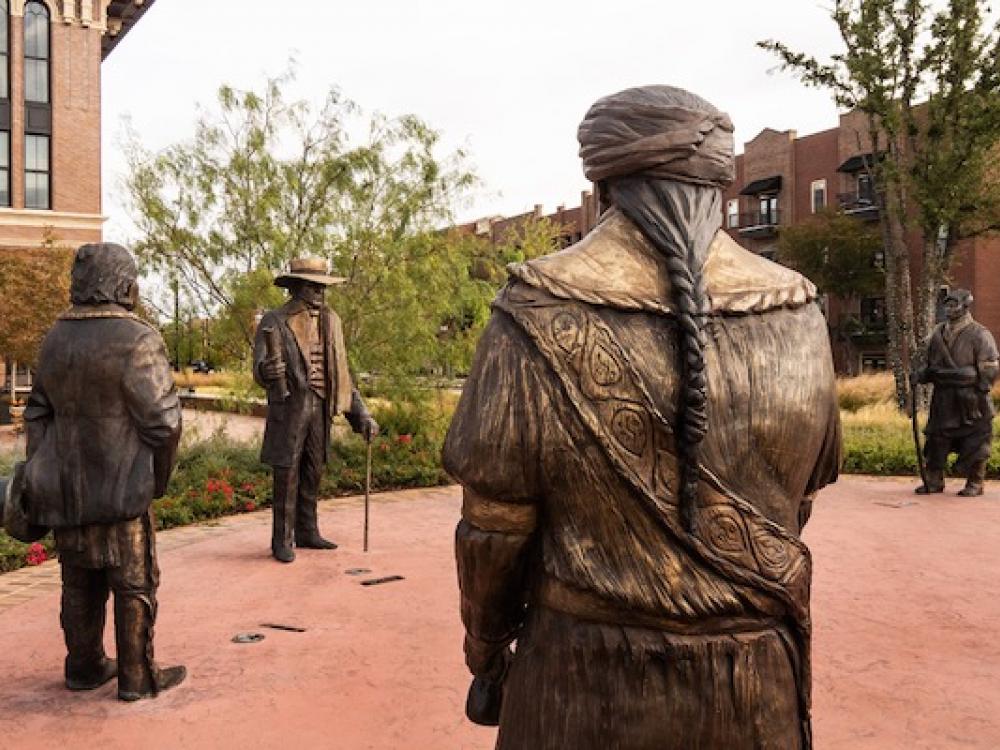 In 2021, the City of Grapevine installed Peace Circle, featuring 10 tribal leaders in a circle with Republic of Texas President Sam Houston, in front of Grapevine City Hall. Photo by J.G. Domke.

As we celebrate Thanksgiving, we may remember the story told to us as children about a friendly potluck between pilgrims and Native American tribes in New England. We now know that story has been mythologized and ignores the bloody conflict between early settlers and the indigenous people.

Over the years, efforts have been made to officially recognize the people who inhabited the Americas first.

Indigenous Peoples' Day began as a counter culture celebration coinciding with Columbus Day in the 1970s. In 2021, President Joe Biden formally commemorated the day with a presidential proclamation, becoming the first U.S. president to do so. The holiday is held on the second Monday in October.

In North Texas, a growing number of markers remember the original inhabitants of the region: 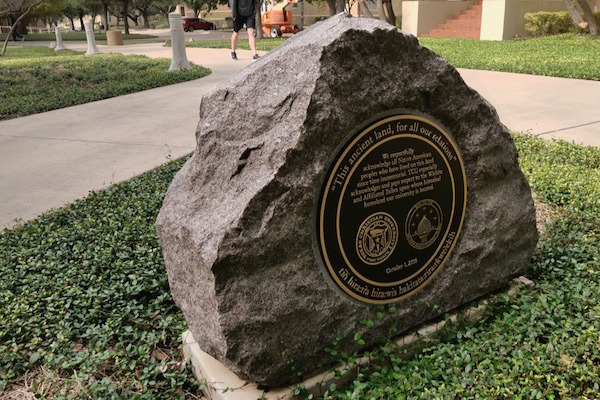 A monument at TCU was installed in 2018 to acknowledge the indigenous peoples who inhabited the area, prior to European settlers. Photo by J.G. Domke.

“The Land Acknowledgement helps remind and educated the TCU community about the long and diverse presence of Native Americans who precede and co-exist with our present area,” says the TCU website.

The monument recognizes the Wichita tribe and Affiliated Tribes, who lived for hundreds of years in a region stretching from what is now Kansas down to near Waco, including what eventually became the Dallas-Fort Worth Metroplex. The Wichita consisted of several bands of Caddoan-speaking peoples, according to TCU.

The Caddo confederacy resided for centuries in lands located in portions of what became the states of Oklahoma, Louisiana, Arkansas, and Texas, with its western edges reaching into what would become the Dallas-Fort Worth Metroplex.

Other tribes have resided at different times in what is now called North and East Texas, including peoples of the Comanche, Kiowa, Cherokee, and Alabama-Coushatta nations. 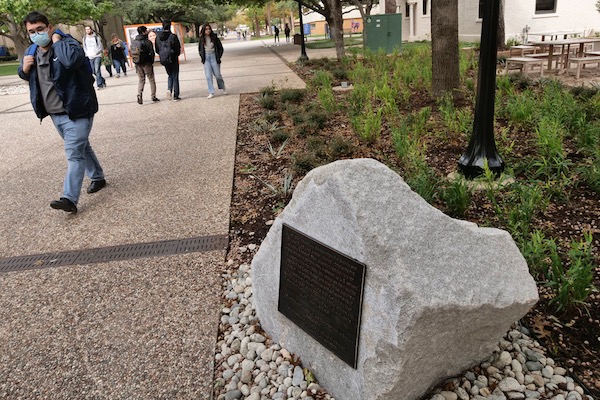 A monument at the University of Texas at Arlington, acknowledging the Native American tribes who originally occupied the land, was installed in October. Photo by J.G. Domke.

At the University of Texas at Arlington, the longest continuously running Native American Student Association in Texas chapter dedicated their Native American Land Acknowledgement monument on Oct. 11 of this year.

The UTA NASA chapter, which hosted its 26th annual Scholarship Benefit Powwow in July, landscaped the garden bed surrounding UTA's monument with switch grass used by Native Americans to make their shelters, and other native plants used for their medicinal and nutritional benefits.

Other monuments memorialize the conflict between early settlers and indigenous people in the region.

The Battle of Village Creek is remembered with a historical marker at the 7th tee of the Lake Arlington Golf Course, at 1516 Green Oaks Boulevard in Arlington. On the site, on the morning of May 24, 1841, General Edward H. Tarrant with 70 men attacked “several Indian villages,” killing 12 Caddo and injured many. There's also a monument at Pioneer Parkway and Green Oaks Boulevard.

In 1843, following years of conflict, Houston was supposed to meet with the tribe leaders in Waco to negotiate a peace treaty, but they didn’t show. About six months later, the chiefs met with leaders of the Republic of Texas at Bird’s Fort near the the Trinity River, north of Arlington. The actual signing of the peace treaty was done by Tarrant and General George Whitfield Terrell on Sept. 29, 1843. 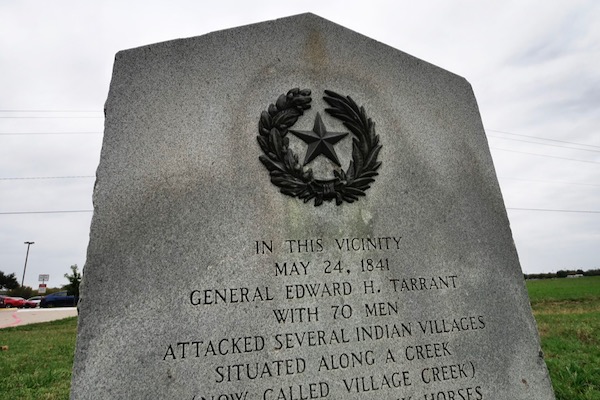 A monument marks the Battle of Village Creek at Pioneer Parkway and Green Oaks Boulevard in Arlington. Photo by J.G. Domke.

The City of Grapevine pays tribute to Bird’s Fort Treaty with a large sculpture in front of their City Hall. The installation called Peace Circle features 10 tribal leaders in a circle with Republic of Texas President Sam Houston. According to different versions of the story, Houston met with the leaders prior to the signing of the peace treaty on the Grape Vine Prairie in Coppell.

The installation by Linda Lewis features 11 bronze statues standing 8-feet tall, along with Houston. Depicted are the leaders from the Delaware, Chickasaw, Waco, Tawakoni, Keechi, Caddo, Anadarko, Ioni, Biloxi and Cherokee Nations. All signed the treaty to be friends with the European settlers.

According to the Texas State Historical Association, following the signing of the peace treaty at Bird's Fort between the Village Creek tribes and the Republic, the region was opened to White settlement and the tribes were removed to a reservation on the upper Brazos River.