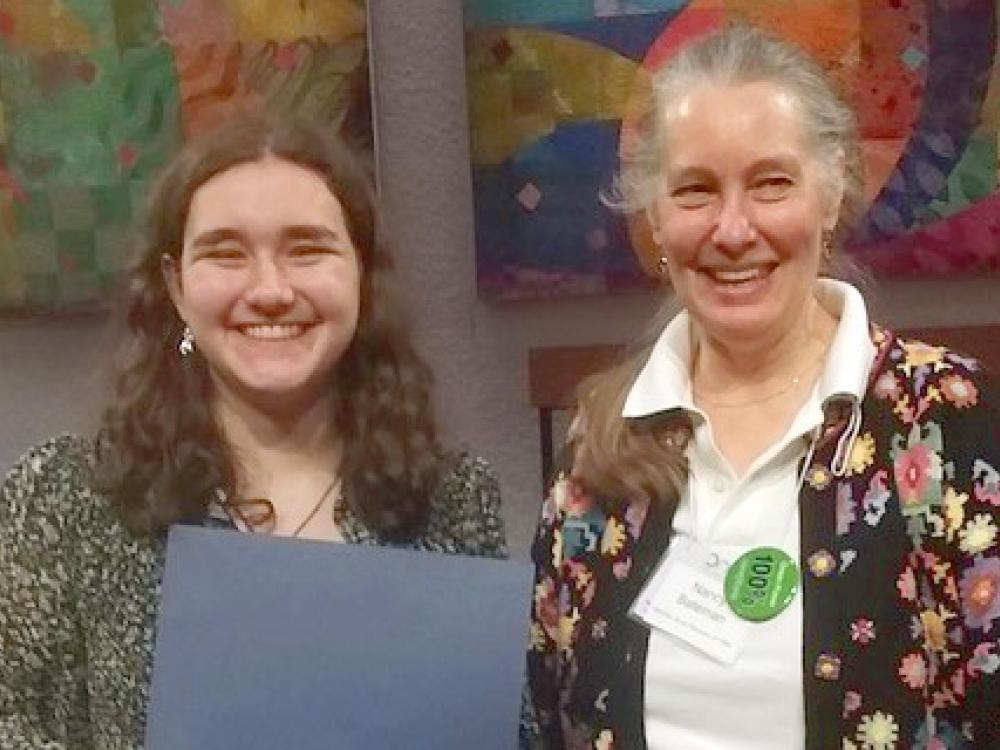 To a child growing up suburbia, a small pond can make a big impression.

When Heather van Waasbergen was growing up in Arlington, she was captivated by the wildlife thriving in the small pond at River Legacy Nature Center.

Now she plans to become a wildlife veterinarian, thanks in part to the Ned Fritz Scholarship.

The stipend is awarded annually to graduating high school seniors active in a North Texas Unitarian Universalist congregation who plan to pursue a career focused on protecting and preserving nature and the environment.

Genie Fritz and friends established the scholarship in 2012 to honor her late husband, Texas's most famous environmentalist, Ned Fritz.

The scholarship is managed by the First Unitarian Church of Dallas, which van Waasbergen attends.

Fritz piled up environmental victories before he died in 2008 at 92. He was the founder of the land preservation movement in Texas, with the creation of nonprofits such as the Nature Conservancy of Texas and the Texas Land Conservancy. He helped establish a Big Thicket National Preserve. He shepherded legislation to create five wilderness areas in East Texas national forests. He also led a coalition to thwart plans for a Trinity River barge canal, and so much more.

The 2022 Fritz honoree Van Waasbergen graduated valedictorian of Arlington’s Martin High School in June. The 18-year-old plans to pursue an animal biology major at the University of California, Davis, then complete her DVM at Davis School of Veterinary Medicine, one of the top-rated schools in the world for that field.

“I got my scuba-diving certification a couple of years back," said van Waasbergen in a Zoom interview with this reporter recently. “So I'm hoping to do some work with marine animals.”

As a youth, she earned the Girl Scouts Bronze award for marking stormwater drains in Costa Rica with Kids Saving the Rainforest. During her trip, she cleaned enclosures and fed rainforest animals in rehabilitation. Closer to home, she fed juvenile rescued birds at Rogers Wildlife Rehabilitation Center as a volunteer. The teen also volunteers at SPCA of Texas’ Jan Rees-Jones Animal Care Center. The service work stimulated her desire to become a wildlife veterinarian.

"I've always liked birds,” she said, listing her many and varied interests in animals, including those seen at River Legacy pond. "Especially frogs. As an indicator species, they tell you a lot about the overall health of an environment," pointing to a frog pendant she wears as a totem necklace.

Van Waasbergen will be attending University of California at Davis this fall. The college has an acceptance rate of only 40 percent. With the UC system decreasing out-of-state admissions, getting in is no easy feat. But attendance at UC is a family tradition. Her mother, Lori Van Waasbergen, a retired microbiology professor, and father, Robert van Waasbergen, who possesses a PhD in marine geology, met in graduate school at UC, San Diego.

Van Waasbergen speculates that the most critical challenge in her field will be dealing with the effects of global warming.

"We see weather patterns becoming more severe, and that impacts animals big time,” she said. “California wildfires will be a significant problem. Most of the challenges will focus not on the individual animals or species, but on how human intervention impacts the environment and what that does to wildlife."

The Unitarian Universalist Association has a history of environmental consciousness-raising. One of the congregations' basic principles is “a respect for the interdependent web of life.”

"A lot of the Unitarian values are humanistic with respect for all people. It's important that we also extend that respect to organisms that aren't humans." 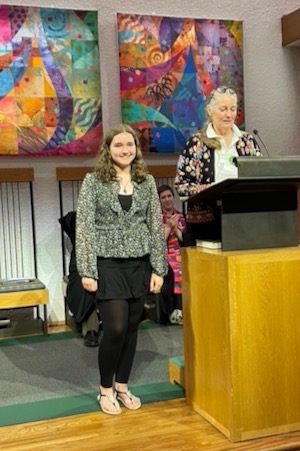 Heather van Waasbergen is honored at a ceremony conducted by Nancy Bateman, right, in July. Photo courtesy of First UU of Dallas.

Van Waasbergen recalls a group church trip to Boston. One of the highlights of the tour was visiting Walden Pond. The pond’s quiet life was pivotal to Henry David Thoreau, just as her River Legacy pond was to her.

Noting that the esteemed transcendentalist was Fritz's favorite author brought a quick smile to her face.

"I know [Fritz] didn't do it alone," van Waasbergen said, "but his life shows how one person can have a huge impact and how legislation can help preserve environments for decades, even centuries."

We ponder the fact that the River Legacy Science Center probably wouldn't exist if Fritz hadn’t thwarted plans to transform the river into a concrete channel back in the 1970s.

"The most powerful renewable energy resource we can generate are educated young people,” said Nancy Bateman, who presented the Ned Fritz scholarship to van Waasbergen in July. “By supporting the college experience of students like Heather, the health of our planet is in capable hands."

"The most powerful renewable energy resource we can generate are educated young people,” said Nancy Bateman, who presented the Ned Fritz scholarship to van Waasbergen in July. “By supporting the college experience of students like Heather, the health of our planet is in capable hands."