Plastic bags are killing horses and cows across Texas 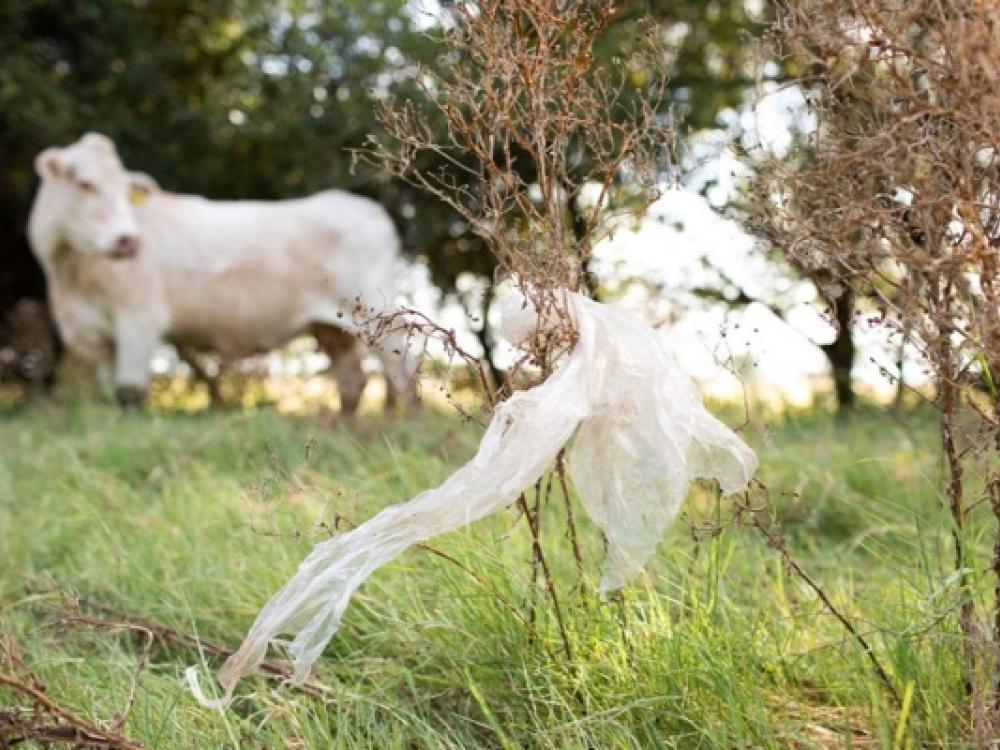 Kristie West, who owns a ranch and bed and breakfast in Pleasanton, has worked to raise awareness about the fatal impact plastic bags have on livestock. Photo by Callie Richmond for The Texas Tribune.

Kristie West was driving down the highway in rural South Texas when she saw it.

The drive from her ranch to the nearby town of Poth was usually uneventful. But on that day in 2017, West saw something that made her slam on the brakes of her pickup.

A white plastic bag had flitted into a horse pen behind a house where a young palomino was grazing. Someone who doesn't work with livestock probably wouldn't have thought twice about it. But West trained horses, and she knew the colt would treat the bag like a toy.

She quickly pulled into the yard and raced to the front door. A man answered.

“I said, ‘Do you care if I run out to check on your horse?'" West recalled. He said it was fine. "That’s all I said. I ran behind his house just as the horse took off running."

When West got to the pen, the colt had already swallowed the bag, and she could see that he was suffocating. He then bolted, jumping a barbed wire fence. West ran after him. But she was too late.

“He was dead," she recalled.

The prevalence of such incidents has prompted states and cities across the country to enact regulations to curtail the use of plastic bags, which can suffocate and cause fatal digestion blockages in livestock and wild animals. But in Texas, the regulation of plastic bags — grocery or otherwise — is all but nonexistent, and recent developments indicate it will remain that way.

Last year, the Texas Supreme Court struck down the city of Laredo’s plastic bag ban, effectively ending about a dozen similar policies in other Texas municipalities.

In a concurring opinion, Justice Eva Guzman agreed with her colleagues but said the state Legislature should clarify whether plastic bags can actually be banned and described the pollution as "an ongoing assault on our delicate ecosystem." Earlier this year, Democratic state lawmakers attempted to do that, but the legislation they filed never even received public hearings.

Last year, the Texas Supreme Court struck down the city of Laredo’s plastic bag ban, effectively ending about a dozen similar policies in other Texas municipalities.

Meanwhile, the absence of municipal regulations means many Texans have reverted to using plastic bags once again. And some say the litter is getting worse.

Although retailers like H-E-B still encourage customers to bring reusable bags to the store — the grocery chain also did away with the thin, single-use bags altogether in Austin — the wispy receptacles quickly reappeared at stores that had briefly switched to paper sacks before the court ruling, and the sight of plastic bags wafting down the highway remains a common one.

With little state regulation and a full stop from the state's highest civil court, what’s a rancher to do?

“I don’t know what they could do,” West said. “The biggest thing is the people — that they just need to quit littering.” 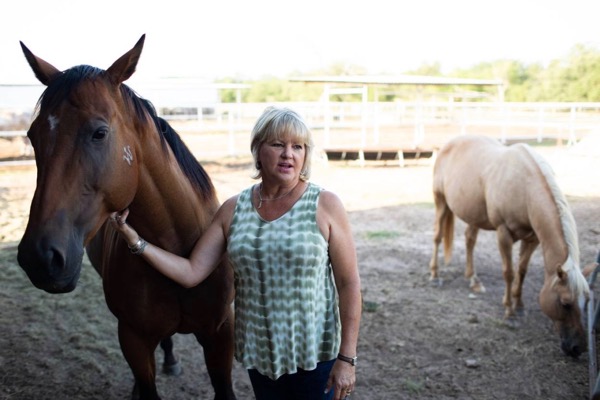 Since the incident with the Palomino colt, West has been doing her part to raise awareness of how lethal plastic bag litter can be. For two years, she’s worked with the Independent Cattlemen’s Association of Texas to distribute bumper stickers that warn people in bold red letters that “plastic bags KILL animals.” For its part, the state's environmental regulatory agency, the Texas Commission on Environmental Quality, has its own anti-litter awareness campaign, called "Take Care of Texas." (The well-known "Don't Mess With Texas" campaign was developed in 1985 by an Austin ad agency for the Texas Department of Transportation).

The TCEQ, which is also responsible for enforcing the state's litter and dumping laws, does a number of things to combat littering, such as sending $5.49 million every year to councils of government across the state to fund public awareness campaigns, community trash pickups and litter surveillance. Between 2016 and 2017, that funding bankrolled more than 230 such projects across the state.

But environmental groups say it's not enough.

Andrew Dobbs, legislative director at Texas Campaign for the Environment, said the state needs to ban single-use plastic bags or the problem will continue.

“Picking everything up is not really a solution at all, right?” he said. “You’re much better off unloading the gun than you are trying to wear a bullet-proof vest.”

Texans and environmental groups from across the state filed amicus briefs in support of the Laredo bag ban. One of them was Billy Easter, a rancher who lives near Wichita Falls.

Easter runs 200 head of cattle on 1,400 acres. He owns 2 miles of land along U.S. Highway 281, where he said he is constantly pulling plastic bags off barbed-wire fences. He said he’s lost cattle to plastic bags and that oftentimes ranchers don’t notice their livestock has swallowed one until it’s too late.

“These cows in the pastures, you don't see them every day,” Easter said.

He said he’s lost cattle to plastic bags and that oftentimes ranchers don’t notice their livestock has swallowed one until it’s too late.

Although Easter and others urged the court to allow cities to make the bag ban choice for themselves, the state supreme court sided with the merchants. In its ruling, the court said that single-use bags are considered garbage and fall under the state's solid waste disposal law, which preempts municipal ordinances.

In its ruling, the court said that single-use bags are considered garbage and fall under the state's solid waste disposal law, which preempts municipal ordinances.

But in her concurring opinion, Guzman urged the Legislature to take "direct ameliorative action" and change the laws to better address environmental concerns.

"Standing idle in the face of an ongoing assault on our delicate ecosystem will not forestall a day of environmental reckoning — it will invite one,” she said.

Rep. Gina Hinojosa, D-Austin, and Sen. Judith Zaffirini, D-Laredo, filed legislation during this year's legislative session that would have exempted single-use plastic bags from the Solid Waste Disposal Act, specifying that they do not quality as a "container or package." That would have freed up municipalities to regulate them again.

Hinojosa argued that the law needed to be clarified because the original intention of the act was to regulate styrofoam and other manufacturing waste that went into landfills, not plastic bags.

Rep. Gina Hinojosa, D-Austin, and Sen. Judith Zaffirini, D-Laredo, filed legislation during this year's legislative session that would have exempted single-use plastic bags from the Solid Waste Disposal Act, specifying that they do not quality as a "container or package." That would have freed up municipalities to regulate them again.

"My bill sought to make absolutely clear that the statute is not meant to include single-use plastic bags in order to ensure local plastic bag ordinances are not preempted," she said in an email.

Last year's court ruling was the latest in a string of mostly legislative moves that have eaten away at local control. For cities like Brownsville, one of the municipalities that had to stop enforcing its ban on single-use bags after the court ruling, it's frustrating that the state has not allowed communities to have control over their own environments.

Lawmakers "don't want the federal government to tell them what to do, but they turn around and want the state to have control over the communities," said Arturo Rodriguez, Brownsville's public health and wellness director. "It’s a bit ironic because municipalities need to be able to exercise their due diligence within their domains."

WHY NO BAG BANS?

So why won’t the Texas Legislature take up the single-use plastic issue?

Jose Aliseda, a former Republican state representative, is the district attorney for Bee, Live Oak and McMullen counties, where he also runs cattle. Aliseda said he believes the plastics industry is too large and powerful to be swayed by the concerns of the agricultural community.

“The honest truth is there's not enough of us," he says of ranchers. "Yes, we're a big part of the economy, but as far as the number of people, there's not that many ranchers and farmers in the whole country.”

Aliseda said he believes the plastics industry is too large and powerful to be swayed by the concerns of the agricultural community.

Chemical companies spent between $840,000 and $1.4 million on lobbyists during the 2019 legislative session, according to filings from the Texas Ethics Commission. The Texas Chemical Council, which represents the industry, declined to comment.

The Dow Chemical Co., one of the world’s foremost producers of plastic, didn’t respond to requests for comment about its Texas lobbying goals, but public records show the company spent the highest amount of any chemical company — between $275,000 and $459,000.

When asked about plastic lobbying efforts, a Dow spokesperson said the company participates in the political process in compliance with state and federal laws. Dow has several initiatives to end plastic waste, said spokesperson Ashley Mendoza, and promotes "post-use solutions" of plastics.

Some chemical groups take issue with the term "single-use" plastic bags and say they have many secondary uses, such as small trash can liners. Mendoza pointed to a 2019 study from the Journal of Environmental Economics and Management that found carryout bag bans in California resulted in greater numbers of heavy plastic garbage bags.

Some bag ban opponents say it's up to retailers to prevent litter or that it's the responsibility of each individual Texan. But the way Aliseda sees it, as governments across the country face mounting pressure to take action on environmental issues, Texas will eventually have to face the problem plastic inflicts on Texas agriculture and make a choice on how to deal with it.

“The state has to decide what's more costly of the two options," he said, "forcing the people that use the plastic bags or make plastic bags to change, or continue to basically be a nuisance on agriculture."

Lara Korte is a fellow with the Texas Tribune. Contact her at [email protected]