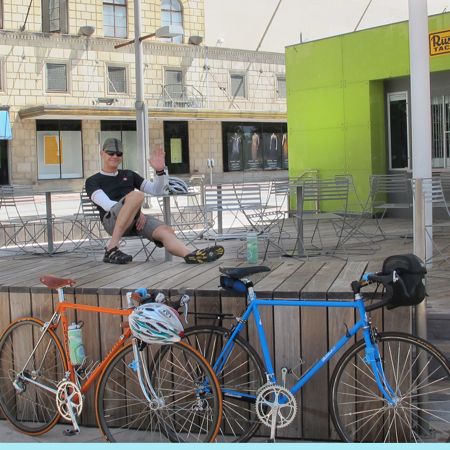 While some environmentally conscious folks have splurged on electric cars to save gas and the planet, Joel Quintans opts for an old fashioned solution. A bicycle, make that a couple dozen bicycles, have been the Dallas resident’s transportation of choice since the early 1990s.

At least two days a week, Quintans heads out on two-wheels from Oak Cliff to his job at UT Arlington. It takes him, a little over an hour, depending on the traffic lights. But he says that’s not much more than traveling by car, which takes him at least 45 minutes.

“My cyclometer registers at 39.6 miles roundtrip,” he says. “I either take Davis, which turns into Division, or Jefferson, which turns into Abrams,” he explains. “Both routes eventually take me directly to UT Arlington.”

The 51-year-old art director says he started commuting to work more than 20 years ago because of his longtime fascination with bicycles.

“The efficient design of a bicycle is what intrigues me – just man and machine, “he says. “Of course, the obvious benefits are exercise and to save gas. But most importantly, it heightens awareness to drivers and it’s damn good for the environment.” 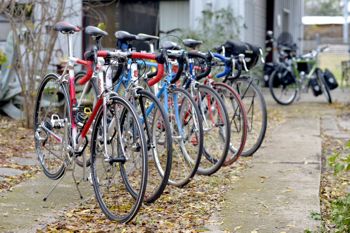 Bikes aren't just for getting to work either. Quintans says it's not unusual for him to ride to grab a bite from his favorite food truck, Good Karma Kitchen, in Fort Worth. He and his wife, architect and designer Alicia Quintans, also ride bikes around their neighborhood, which he says keeps them more engaged with their surroundings.

“I love riding a bicycle, I have a stable of 24,” said Quintans. “Yes, I own a car, but I despise driving. It's more of a struggle for me lately because of the population increase in the Metroplex.”

As for the challenges Quintans faces as a cyclist, he mentions the semi-annual time change and inclement weather. He's also been "pulled over" for speeding through a school zone, he says.

His love of two wheels extends to motorcycles, which has its own dangers: “You have to stay in the moment since any distraction could end your life.”

As a child, Quitans says he rode his bike a lot because it gave him freedom, now he has just carried that freedom into adulthood.

“A bicycle was a part of my most impactful memories, such as riding to get groceries when I was seven years old when my family lived in Cincinnati, Ohio. Exploring trails in the woods and the Smokey Mountains when my family lived in Asheville and Durham, North Carolina and riding to visit friends on the other side of town when we moved to Dallas. My friends would be out all day just exploring and gaining an experience that I don't think kids today have.”

Indeed, Quintan's love of bicycles goes beyond just riding them. 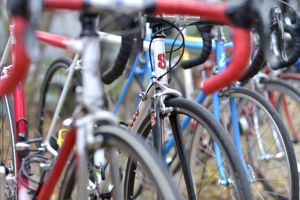 “The efficient design is what initially intrigues me. And then there's the craftsmanship. Almost all of my bikes are hand-made. I enjoy the artisanal quality -- imagine an individual learns his craft, then creates a very efficient machine," he said. "I can go and on. Environmentally, riding a bike speaks for itself. Most of my bikes are vintage pieces of art, so a good bike can definitely last a lifetime.”

Do you have a green commute to work or know someone who does? Contact Rcook13@earthlink.net and you might see your story published here next.