Corps preserves some of the last Fort Worth prairies 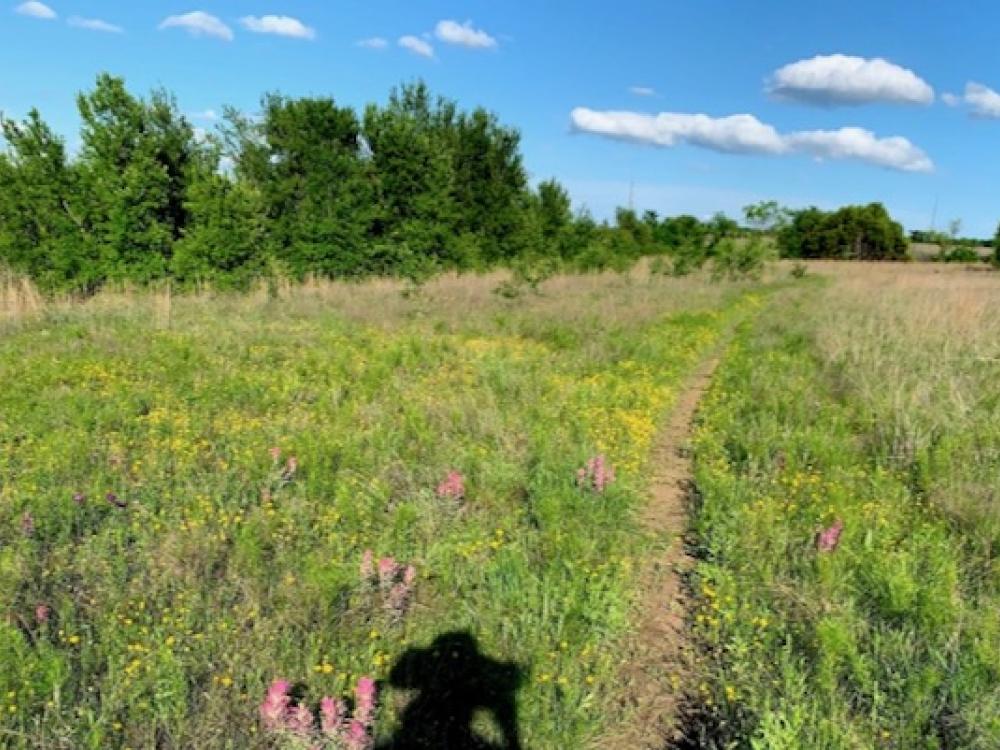 Rocky Creek Park features one of Dallas-Fort Worth’s most distinctive natural spaces and the U.S. Army Corps of Engineers wants to keep it that way.

Located on the southeast side of the lake around Benbrook Lake in Crowley, the park operated by USACE contains one of the last remaining Fort Worth prairies, a distinct subgroup of prairie landscape. 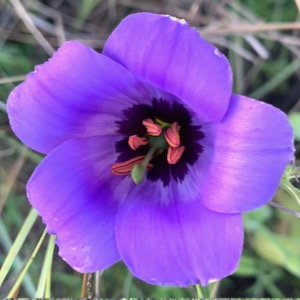 A bluebell (Eustoma exaltatum) spotted in one of the Environmentally Sensitive Areas near Lake Benbrook last June. Photo by Kim Conrow.

Although the grass isn’t always greener there, the prairie parcel is often more colorful — adorned with tens of thousands of wildflowers during warmer seasons and serving as home to a range of wildlife.

About six months ago, the USACE Benbrook team designated a 19-acre portion of the park as an “environmentally sensitive area” in its updated Benbrook Lake Master Plan.

The newly designated classification didn’t exist when the Corps published the original master plan in 1972, according to the new document. More than 1,100 acres received the new designation in the updated plan.

More than 1,100 acres received the new ESA designation in the updated plan.

“The new areas classified as ESA (environmentally sensitive areas) include unique or sensitive prairies, woodlands, wetlands and aesthetic areas,” the document states. “The areas were identified for the protection of threatened and endangered species and their habitat, as well as culturally significant sites and unique views and landscapes.” 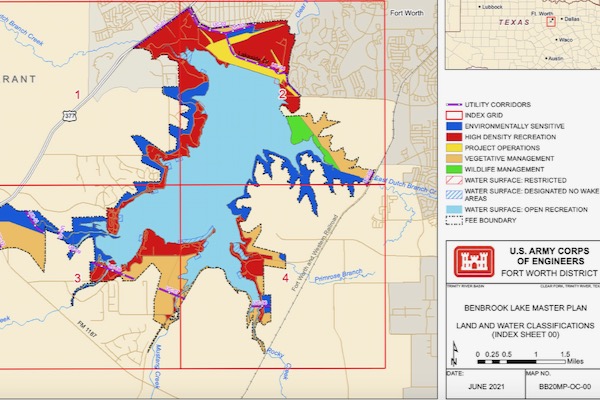 The Benbrook Lake Master Plan designates Environmentally Sensitive Areas around Benbrook Lake in dark blue. Rocky Creek Park is located in Section 4 on the map. See larger version of the map in Appendix A of the plan. Courtesy of USACE.

The USACE park offers a primitive campsite under tree canopy and sits atop an open peninsula to the man-made reservoir. More than 10 miles of trails wind through the park, welcoming hikers, joggers and equestrians.

On any given day, the scope of wildlife can include deer, rabbits, squirrels, armadillos, possum, owls, hawks — possibly bobcats and coyotes — and insects and reptiles of many kinds. 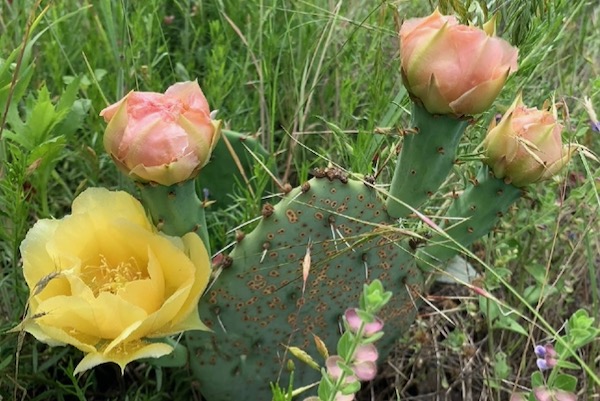 Prickley pear seen at the Environmentally Sensitive Area on the east side of Lake Benbrook last May. Photo by Kim Conrow.

Much of the land remains untouched except for the small, developed road that leads to the campgrounds.

“This area is so special because it is one of the last remaining Fort Worth prairies,” said Amy Martin, a Green Source DFW columnist and the author of Wild Dallas-Fort Worth: Exploring the Amazing Nature of North Texas. Hitting shelves this year, the book details the natural history, ecology and weather of Dallas, Tarrant, Collin and Denton counties. 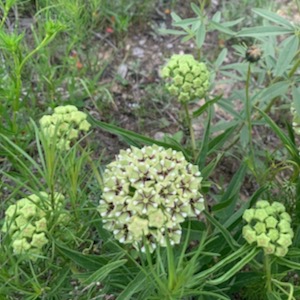 “What blows me away about Fort Worth prairies is how the plants grow straight into the limestone,” Martin said. “These areas are incredible at growing wildflowers.”

While Rocky Creek Park is not on her personal list of accomplished hikes or overnight stays, she said the adjacent Sid Richardson Tract is one her favorite natural spaces in Dallas-Fort Worth, and the two share many similarities.

She said both are important to natural resources and local ecosystems and emphasized their ability to grow native endemic plants that exist in no other area around the world.

Martin also boasted the versatility of the land.

“Many plants shift and change throughout Fort Worth prairies,” Martin said. “There’s this interesting phenomenon they have, where they sometimes look like Blackland prairies, but when you move to a dryer area, there’s an entirely different plant community.” 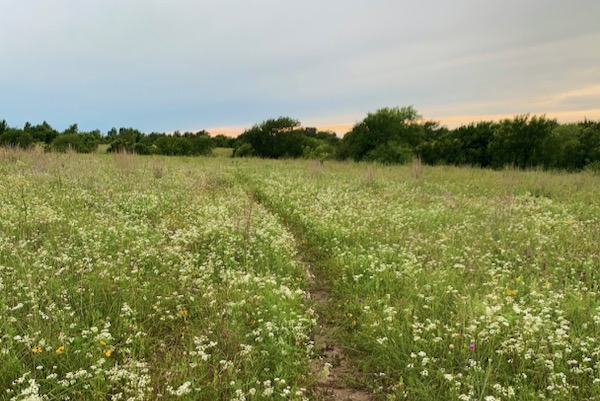 A field of Prairie Bishop (Bifora americana)​ flourishes at one of the Environmentally Sensitive Areas on Lake Benbrook's east side. Photo by Kim Conrow.

While most of the world shut down during the COVID-19 pandemic, Crowley resident Kim Conrow took every opportunity to appreciate the outdoors — one of few hobbies that was safe but still exciting.

“I live in Crowley and have driven by this place probably 1,000 times in 20 years — I thought it was private land,” the immediate past president of the Native Plant Society of Texas said. “Being a rule-follower, I stayed away. But once I learned it was public land, we started.”

Since making her first trip to the park about a year and a half ago, saunters on the prairie have become one of Conrow’s favorite pastimes. She’s captured many sunrises and sunsets out on the prairie with friends and family,

They’ve trekked out there during the fall — as vibrant trees began to drop their leaves — and in the early winter when a blanket of snow covered the ground.

They’ve seen deer, snakes and many animal remains and discovered the remnants of sneaky teenagers.

“You never know what you’re going to find out there,” Conrow said. 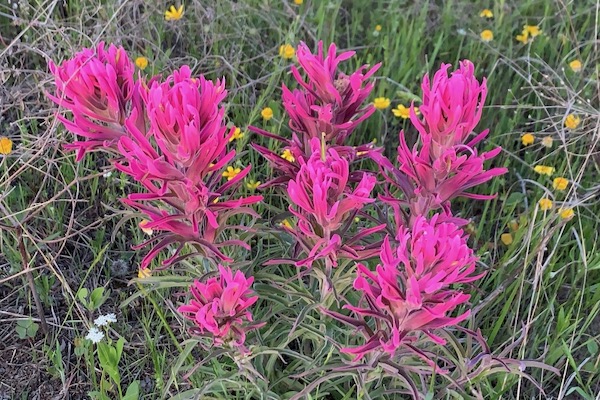 Downy Pink Paintbrush (Castilleja purpurea)​ at one of the Environmentally Sensitive Areas on Lake Benbrook's east side. Photo by Kim Conrow. Watch her Zoom presentation.

About: All of the U.S. Army Corps of Engineer land around Benbrook is open to the public. There are no signs designating the Environmentally Sensitive Areas at this time. However, the areas are marked on the Benbrook Lake Master Plan maps. See Appendix A.

Trails: Trails include City of Fort Worth Trinity Trails, Benbrook Dam Trail, Holiday Park Nature Trails and the equestrian trails, which include a 14-mile and a 10-mile trail, both accessible to hikers 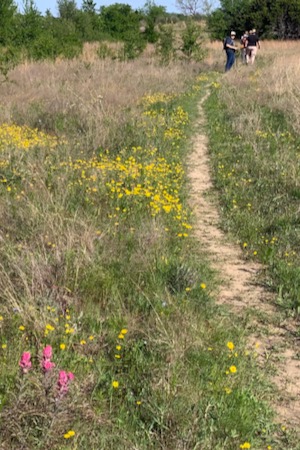 An equestrian trail winds through an Environmentally Sensitive Area on Benbrook Lake. Photo by Kim Conrow.

An additional 10 miles of trails are located in and north of Rocky Creek Park. The trailhead is located just outside the Rocky Creek Park gatehouse. See equestrian trail maps.

Fort Worth Prairie Park efforts move ahead despite setbacks

Brandi is an independent journalist in North Texas and a graduate student of New York University’s professional writing program with a focus on environmental science. She received her B.A. in journalism at Texas Tech University. She is passionate about all-things-news but enjoys environmental coverage most. Her preferred topics are wildlife conservation, sustainability, natural resource management, and biodiversity.