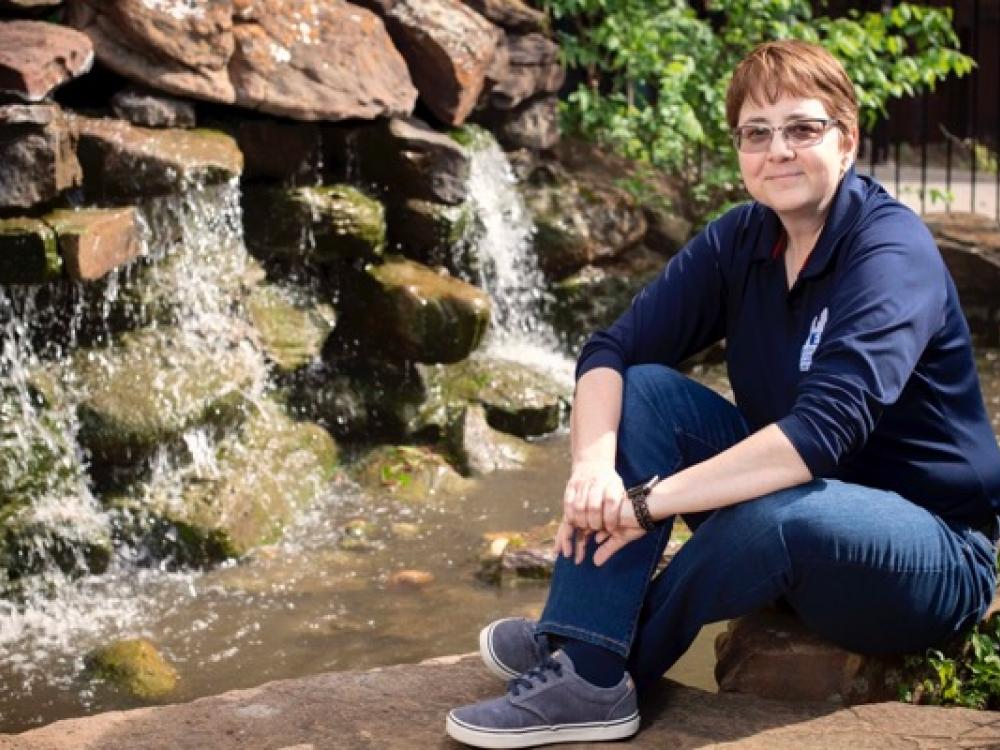 UNT prof Rudi Thompson recently received a $2 million grant from the city of Dallas to continue a program that teaches young water users how to conserve and responsibly use this valuable resource. Photo courtesy of UNT.

Ruthanne “Rudi” Thompson is no stranger to utility bills.

In the past 13 years alone, the UNT College of Science associate professor has secured more than $7 million in funding from the City of Dallas to examine water usage data on thousands of homes with Dallas zip codes – allowing her to study and correlate the effects of education on changing behavior.

A “bill collector,” in her own right, each month Thompson and her team receive the bills’ raw data – no personal information is included – for the Environmental Education Initiative, a unique program sponsored by the City of Dallas program that’s saved billions of gallons of water from going down the drain.

The award-winning program is teaching young water users how to conserve and responsibly use this valuable resource. The initiative is led by Thompson, who works with teachers throughout Dallas to teach students in Pre-K through 5th grade about conservation through hands-on activities such as building mini aquifers in cups, creating water filtration devices and singing songs about the urban water cycle. They also get at-home tools, such as a miniature timer that lets kids measure and calculate how much water they save when turning the water off while brushing their teeth.

The program’s efforts are paying off. Each drop of water saved is a drop that doesn’t have to be cleaned at a treatment plant. Those drops can quickly add up to financial savings when factoring in the costs for equipment, maintenance, labor and other resources.

“It’s a savings of over $3 million a year and another 22-plus billion gallons in unused water for the city of Dallas,” she says. “It’s like shutting down the water treatment plant for at least 12 days every year. Our question now is to see if we can hand this off to other cities and water units.”

Most recently, Thompson received a $2 millon grant renewal through 2024 from the City of Dallas, allowing her to continue her work. In total, it can be estimated that Thompson and her team, through the behavior changes tracked from residential water usage, have saved the city more than $31 million a 10-year period.

“We actually get the water usage data by zip code from the City of Dallas where we have taught students, and then we analyze the data to determine water use in the home before and after the intervention,” Thompson says. "We have found a statistically significant difference.”

“It’s a savings of over $3 million a year and another 22-plus billion gallons in unused water for the city of Dallas,” she says. “It’s like shutting down the water treatment plant for at least 12 days every year. Our question now is to see if we can hand this off to other cities and water units.”

For her, it’s an effort three decades in the making. When she started her first full-time position teaching high-school biology in 1986, she wanted to be the most effective teacher possible. However, when she asked for support materials, all she got was a five-year-old student addition textbook.

“One of the problems in schools is that there are all these great, hands-on lessons, but the teachers don’t have the materials to do them,” she says.

She vowed to change that one day.

When Thompson and a mentor at UNT were awarded the first Environmental Education Initiative grant as a test project in 2006, she leapt at the opportunity to help. A year later, she was in charge.

Now, through the EEI program, Thompson’s team provides direct instruction to students and leads professional development classes year-round for teachers and students in the Dallas, Richardson and Duncanville school districts, as well as local private schools. The teachers learn how to lead every lesson plan in the program and receive boxed kits that include everything needed for EEI teaching.

The goal is to create new behaviors while the students are young.

“Once a habit is made, it’s made,” she says. “If you have a good habit, you don’t stop – according to the data. The great thing about working with kids is they haven’t spent as much time making a bad habit.”

For each child who participates, an average of 502 gallons of water is saved monthly – a number that’s “far more than any one kiddo can do,” says Thompson.

“I like to call it guilt, but the academic term is intergenerational transfer,” she says. “We have found that the kids are going home and creating change in their families. Kids are so concerned about the planet, and they really want to have more say and to be able to help people conserve water.”

The key to the program’s success, says Thompson, is the resulting water usage data. She and her team measure the data continuously to ensure what they’re doing actually works.

“Education takes time to stick, but we have found that there is a saturation point – no pun intended. After about the third year, there is a point at which teaching more doesn’t equate to more water savings,” she adds.

Asked why more cities don’t have something similar, Thompson explains “it’s a big commitment. There are budget limitations”

“Cities are required by the state to have a water conservation program, but the state doesn’t mandate how much money they should spend or how they should educate their community,” she notes. “It speaks to how the City of Dallas is really taking on environmental responsibility at the local level. The city is at the forefront of leading the region on climate change and resource management and is very committed to sustainability.”

Monique Bird is a senior communications specialist for news promotion at the University of North Texas.