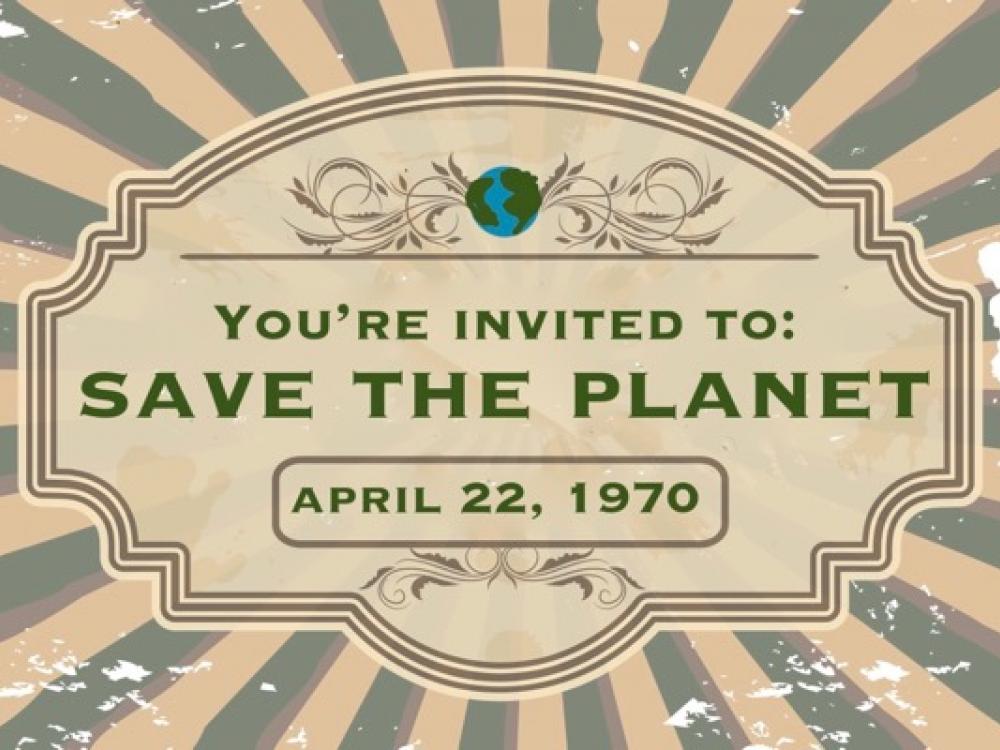 A look back at the historic day in DFW. Storyblocks image modified by Julie & Karl Thibodeaux.

The first Earth Day in 1970 was front page news with thousands of schools in the United States participating, from elementary schools to colleges. Schools in North Texas didn’t let it go unnoticed. 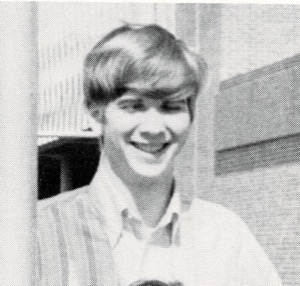 Lon Burnam, a former Fort Worth state representative and current chairman of the Tarrant Coalition for Environmental Awareness, remembers when he was 16 years old and a member of the ecology club at Fort Worth’s Western Hills High School, which had just opened in 1969. They set up a recycling collection station for cans and paper, which brought the principal out of his office upset with them for doing it on the front lawn. Western Hills' Earth Day was also more than a one-day event with students going along the street picking up trash which Burnam remembers pleased a local pizza joint so much he offered everyone free pizza.

Posting a request for memories on Facebook’s Fort Worth Memories and History group page brought a response from Carolyn Bowen Hopper, who isn’t certain it was the first Earth Day but when she was a science teacher at Stripling Middle School they had a “massive paper drive.” Then discovered they had to take the paper all the way to Dallas to have it recycled. 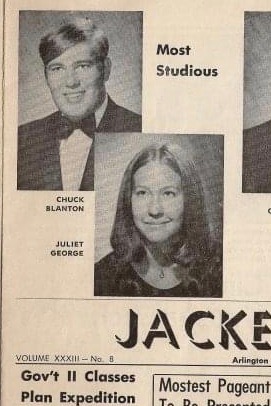 Juliet George Smith, today a Fort Worth historian, then a high school junior in 1970, remembers a stirring speech at Arlington Heights High School in Fort Worth by Harry Bayard Schiller, a Stanford University undergrad and Trinity Valley School alumnus, just a few years older than the teens.

“Every worsening problem he warned against has come true or is coming true,” said Smith, the author of two books on Fort Worth history. “He followed every ominous statement with measures that could be taken to help prevent disaster.”

Meanwhile, Smith said she’d become engrossed in completing an assignment given by her honors English teacher, Frances Caveness, in advance of Earth Day: a collage depicting the natural world and the threats to its integrity.

“My parents and maternal grandmother allowed me to clip items from their news and feature magazines. Through reading, looking, compiling and arranging images and text, I learned a great deal in a short time – validating such a project."

“I know it was a primitive effort, but I was proud of the poster and kept it until just a few years ago. How to - reluctantly - dispose of it? Place it in the recycling cart.” 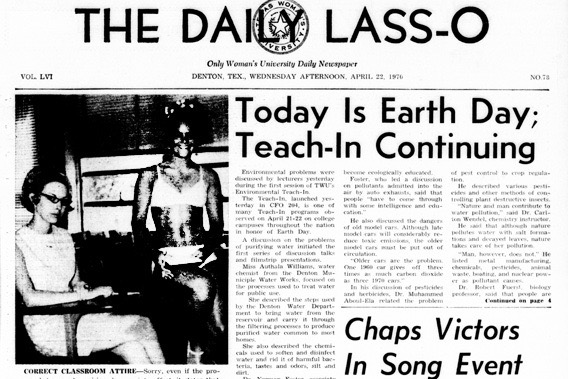 Some of the best memories of the first Earth Day in North Texas are found online at NewspaperArchive.com, a popular site for genealogy searches. It has archived some student newspapers published in 1970 along with other daily papers.

The teach-in was going to last two days with one speaker, Authala Willians, a chemist at the Denton Municipal Water Works, who described the city's filtering to purify the water and how the chemicals used got rid of harmful bacteria, tastes and odors, salt and dirt.”

Faculty members lectured on how smoking pollutes the air and radiation hazards. Then Professor Eugene Hupp told them “the use of atomic energy is a very promising source of energy.”

Every school in Denton recognized Earth Day and Denton High’s SCOPE (Student Committee On Pollution of the Environment) promoted an “auto boycott” asking students to “walk to school, ride horses or bikes to curb automobile pollution.” And then on Earth Day the Denton Record-Chronicle says the “entire school grounds were flooded with bikes, bicycles built for two, skateboards … one person even showed up on a donkey.”

At North Texas State University (now UNT), U.S. Senator Ralph Yarborough,  “on a campaign swing” spoke at the Earth Day assembly in the morning before leaving to speak at the University of Texas Arlington. On the same page in the Denton Record-Chronicle ran another story on how Yarborough told the press in Denton that his opponent, Lloyd Bentsen, was running “slanderous” television commercials about him.

In the afternoon more than 3,000 students went to various teach-ins and the Denton Record-Chronicle also ran a photo of Denton Jaycees trash container that was found “overflowing Wednesday as the effort for a cleaner environment became apparent…” 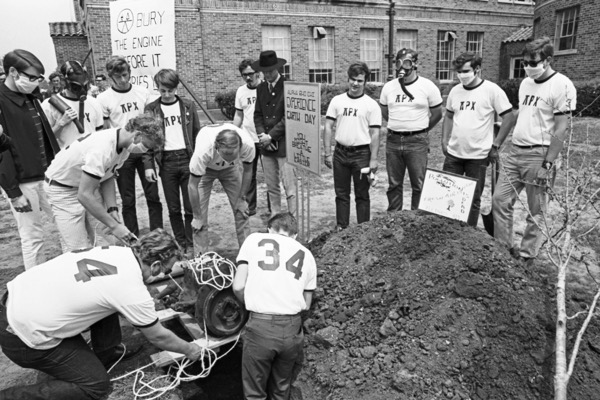 In Arlington, The Citizen Journal ran a story about students writing in class about litter, quoting a nine-year-old student’s essay  “Oh buteful we won’t be able to sing anymore because America won’t be buteful…we can prevent it just some people don’t try.”

In the Arlington Daily News they reported “high school and university students become a little more aware of the fresh air and pure water found in Arlington.”

Congressman Jim Wright, the keynote speaker at UTA, said “unless we assign a much higher priority to environmental protection…we shall face a new type of crisis on a scale heretofore unprecedented in America.”

According to the Fort Worth Star-Telegram, Yarborough, who also spoke at UTA, along with Wright "buried" an internal combustion engine, symbolic of automobile pollution.

They shoveled the dirt into a grave after "funeral services" were conducted by Lambda Rho Chi, an architecture fraternity, wearing surgical masks. They planted a live oak tree over it.

The Star-Telegram also reported that many speakers at the event suggested things individuals could do to combat pollution including - car pool, support noise abatement ordinances, pressure car manufacturers to develop better controls to reduce emissions, boycott foods and beverages packaged in non-returnable materials, purchase biodegradable detergents and not litter. 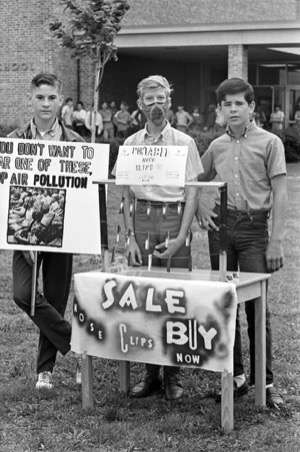 On April 22, 1970, students at North Oak Junior High in Haltom City passed out handbills that read, in part, “This [the Earth] is your home. Keep it clean,” students wore gas masks and carried signs as part of their demonstration. From left, Todney Taylor, Larry Runyon and Bob Nichols. Courtesy, Fort Worth Star-Telegram Collection, Special Collections, The University of Texas at Arlington Libraries.

At Richardson High School, the Richardson Daily News reported students wore green arm bands “in recognition of the necessity to preserve the environment,” and planted a “young tree” outside the Eagle’s Nest.

At Southern Methodist University in Dallas, the Campus Y organized Earth Day activities and the student paper The Daily Campus on April 22, 1970, announced the performance of a play “Progress is Our Most Important Product?” which Clayton Karkosh’s theater crafts class presented. One student in the class, Carlos Davis, said “the play will emphasize the polluted predicament in which man finds himself when he worships technology, progress, and science instead of God.”

“Earth Day may have a lasting effect and produce results, but it could be an ecology bandwagon that is jumped upon one day and off the next.” - Joe David, Owen, The Daily Campus, SMU, April 23, 1970

On April 23, The Daily Campus headlined "Earth Day Draws Large Response." Not giving any number, only saying “lecture rooms were filled.” Everyone was surprised by the size of the turnout and how students had written about 40 letters to “influential congressmen.” The letters protested, among other issues, the request by Dallas to U.S. Congress of $600,000 for the Trinity River Navigation Project, saying it was a waste of money and would ruin the river. (Promoters of the project wanted to turn the river into a canal, so ships could sail to Dallas and the city would be able to claim they had a seaport like other major cities.)

Concluding The Daily Campus article, reporter Joe David Owen wrote, “Earth Day may have a lasting effect and produce results, but it could be an ecology bandwagon that is jumped upon one day and off the next.”

See more of our 50th Anniversary of Earth Day coverage.