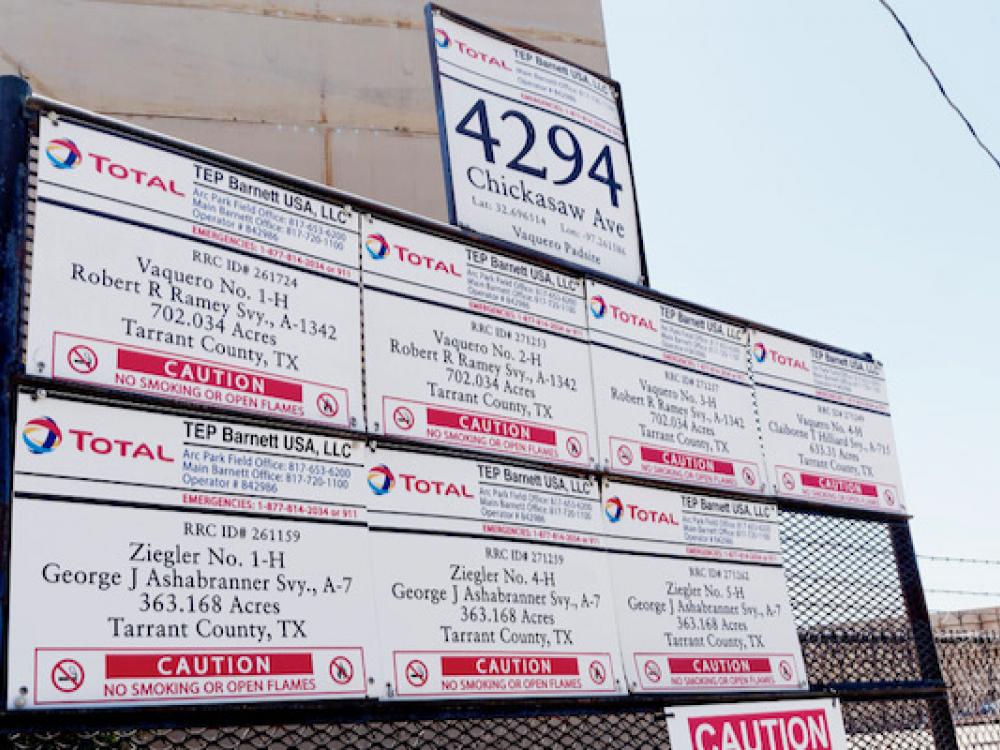 The Environmental Justice Coalition of Fort Worth is pushing back on the expansion of gas drilling in Tarrant County. Above, GSDFW archive photo of Total Energy's well site at 4294 Chicksaw Ave. in Southeast Fort Worth. Photo by J.G. Domke.

A group of Tarrant County activists frequently support the same causes but they’ve made the alliance official with the launch of the Environmental Justice Coalition of Fort Worth.

MacFarlane wanted to take action to preserve the city’s air quality, especially in the underserved neighborhoods, where drill sites often take over the community.

But he knew he needed help.

That’s when he reached out to other environmental advocacy groups and proposed banding together under an umbrella name.

“We created the group to focus on issues that are creating disproportionate impacts to minority-alone communities,” MacFarlane said. “Our main issue is the resurfacing of gas drilling in East Fort Worth and Arlington.”

“We created the group to focus on issues that are creating disproportionate impacts to minority-alone communities,” MacFarlane said. “Our main issue is the resurfacing of gas drilling in East Fort Worth and Arlington.”

While the organization is not a formalized 501c3 nonprofit — but one that just meets as time allows — MacFarlane said that doesn’t make them any less serious about their goal.

Over the last year, the coalition has met with several city council members to propose new revisions to the city’s gas well ordinance. The coalition also sent a letter to the City Council with their requests in early March.

“The Environmental Justice Coalition of Fort Worth urges you to make sensible revisions to the City’s gas well ordinance that will reduce health and safety risks to our community, protect our air and water, improve quality of life, and put Fort Worth in line with drilling practices around the DFW Metroplex and the country,” the letter states.

The coalition’s letter cites higher rates of childhood asthma compared to the U.S. — 18 percent and 8 percent, respectively — and disproportionate impacts to communities of color and low-income communities.

The coalition also requests that the city leaders prohibit companies from using diesel- and gas-powered equipment, which emits more pollutants, and requires public hearing and notification to all residents within half a mile of all wells and pad sites.

As in the case of Stop Six’s Mount Tabor drill site, which local leaders approved the drilling permit of more than a decade ago, the coalition also seeks to prohibit the issuance of new multi-well pad sites that allows new wells to be added without a hearing.

“Residents should be aware of and have a voice in decisions about development in their community,” the letter states.

If their efforts fail or move forward, MacFarlane said the coalition’s next goal is to help local leaders prepare a citywide climate action plan. He added that Fort Worth is one of the largest cities in the nation that has not illustrated such a plan.

“We’re looking to make human health and the environment a priority in the city,” MacFarlane said.

Brandi is an independent journalist in North Texas and a graduate student of New York University’s professional writing program with a focus on environmental science. She received her B.A. in journalism at Texas Tech University. She is passionate about all-things-news but enjoys environmental coverage most. Her preferred topics are wildlife conservation, sustainability, natural resource management, and biodiversity.