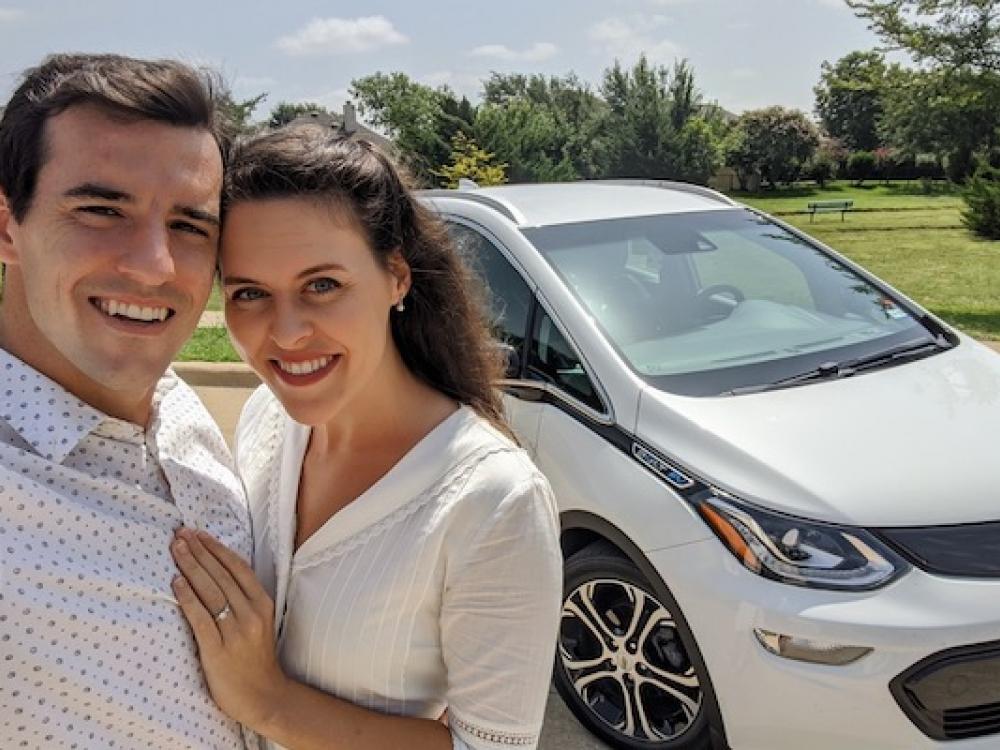 Tanner and Layce Smith of Fort Worth pose with Olaf, their electric Chevrolet Bolt EV. The Smiths say they're so happy with their EV that they'll never buy another gas-powered car. Photo courtesy of the Smiths.

Enter Olaf, the Smith’s frosty white, all-electric Chevrolet Bolt EV, which they named after the jolly snowman in Frozen, the animated Disney movie. (They intend to paint its stubby roof antenna orange, like Olaf’s carrot nose.)

Although a couple of years old, Olaf was new to the Smiths, with low mileage and a low price. To say they’re happy with the purchase would be to understate their enthusiasm.

“I am absolutely sure that we will never buy another ICE (internal combustion engine) vehicle,” said Tanner, an electrical engineer.

Such zeal reflects a recent AAA survey, which found that 96 percent of electric-vehicle owners would buy another one. And of the 12 battery-electric vehicles reviewed in the 2020 Consumer Reports annual auto issue, nine received the highest possible owner-satisfaction scores, two received the next-highest and only one posted an average score. That’s the best showing of any vehicle class in the survey. 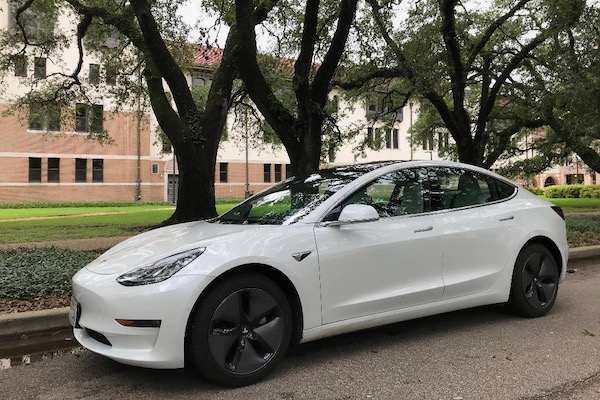 Most used Teslas, like this Model 3, remain relatively pricey in the used-EV marketplace. Photo by John Kent.

Drivers appreciate EVs’ silence, minimal maintenance, green cred and the big wallop of torque when the pedal goes to the floor. And the two most common fears that give people pause about EVs 0 finding a place to charge and running out of juice - evaporate once people actually own one, the AAA study found.

There’s a convenience factor, too, when refueling your car involves nothing more than plugging it into a garage wall socket.

“I like not having to fill up on gas. Stopping for gas is a time waster, especially if you're running late for work,” said Layce, a high-school English teacher. “With our electric car, we start every day with a full charge.”

In the age of coronavirus, it’s also nice not to be handling a germy gas pump, Tanner added.

On the other hand, buying an EV can be a study in sticker shock. It’s a problem that can be sidestepped here in North Texas if you’re willing to sacrifice that new-car smell.

For example, a new Bolt can retail for more than $40,000, but the cost-conscious Smiths got their like-new 2017 model a year ago for about $25,000. And that’s when the savings really started piling up.

“I was primarily motivated by cost, and the car has turned out to be even more cost-effective than I expected. On average, our Bolt EV costs 75 percent less money per mile compared to our old car,” Tanner said.

Battery-electric vehicles can be divided into two main groups - long-range and short-range. Most modern EVs began trickling into the market in 2011, with the 73-mile-range Nissan Leaf capturing the short-range end of the all-electric market early on. Within a year, Tesla burst onto the scene with the much pricier Model S that could travel up to 265 miles on a charge, placing it in the long-range category. Less than a decade later, a 2020 Leaf Plus and a 2020 Model S can deliver up to 226 and 402 miles of range respectively.

But Americans drive * an average of just 29.2 miles a day, well within the capabilities of even the most range-starved EVs, and charging stations are all over North Texas. Unless you’re a dedicated roadtripper, a shorter-range EV most likely will meet your daily commuting needs with electrons to spare. And the prices of shorter-range EVs are ridiculously reasonable on the local pre-owned market.

The workmanlike Nissan Leaf and the space-age BMW i3 currently dominate the short-range, used-EV bazaar. If you want one, you’ll find one, likely at a bargain price. In just a few minutes of internet surfing on Cars.com and Cargurus.com, we located a 2011 Leaf (73-mile range) in McKinney with just 41,000 miles on the odometer for $5,978, as well as a 2016 Leaf (84 to 107-mile range) in North Richland Hills for less than $11,000.

Going upmarket a bit, we found a 2014 BMW i3 (72 to 81-mile range) in Grapevine with less than 39,000 miles for $14,000, and a 2017 i3 (80 to 114-mile range) in Carrollton for $18,500. Buyers shopping in this corner of the market may also run across a few low-production models, many of which are so-called compliance cars. These are limited production automobiles made to comply with quotas and specs under the law, that work well nevertheless and have their own cultlike followings. We located several FIAT 500Es for $8,000 or less, 14 Chevrolet Spark EVs clustered in the $10,000 range and a teensy-weensy smart EQ Fortwo for $11,250. 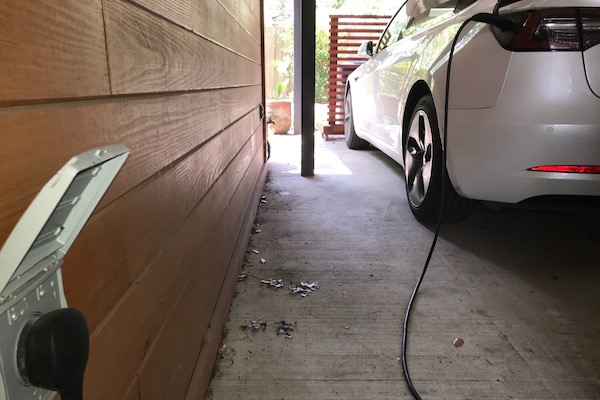 More than 80 percent of EV owners charge at home, according to the Department of Energy. Photo by John Kent.

All of those cars are fine grocery-getters but will scarcely get you out of the Metroplex before needing a top-off. If you want longer range, you’ll pay for it. But, again, on the used market you won’t pay as much.

An example is a 2017 Chevy Bolt EV (238-mile range) in Richardson that bubbled up in our search with an asking price of just under $20,000, and a 2018 Bolt for a shade over $20K. As pre-owned EVs go, the Bolt for now is in a class by itself – a relatively affordable electric car with long range – until recently introduced competitors like the Kia Niro EV, Hyundai Kona Electric and Nissan Leaf Plus find their way onto used-car lots in significant numbers.

Also worth a look are plug-in electric hybrid vehicles, which run exclusively on electric power for up to 40 or 50 miles before a gasoline engine automatically kicks in for extended travel. The Chevrolet Volt (not to be confused with the Bolt) pioneered this genre, with the Honda Clarity Plug-in Hybrid a more recent entrant.

Used Volts, which date back to 2011, can be had for well under $10,000 in Dallas-Fort Worth. Pre-owned examples of the Clarity Plug-In Hybrid, which debuted in 2017, are priced in the low $20,000s. Other PHEVs are available but tend to have more modest all-electric range.

Those who take the EV plunge can feel good about driving around Texas.

“[EVs] offer zero tailpipe emissions, and because the Texas’ electrical grid is relatively clean, they offer a net reduction in nitrogen oxides, particulate matter and volatile organic compound emissions even when accounting for added emissions at the power plant,” said Lori Pampell Clark, Transportation Department program manager and Clean Cities coordinator for the North Central Texas Council of Governments. “The proportion of Texas’ electricity generation that comes from clean, renewable sources is increasing every year.”

Ten counties in the Dallas-Fort Worth region are in “nonattainment” and do not meet the federal air-quality standards for ozone, so widespread adoption of EVs is central to NCTCOG’s mission to reduce air pollution, Clark said.

The good news is that * Dallas-Fort Worth has the state’s highest number of EV registrations. * As of June 2020, there were 12,643 EVs in North Texas, still only a fraction of the overall market share but rising at a rate of about 39 percent a year.

“Experts project EVs could comprise anywhere from 20 percent to 40 percent of all vehicles by 2040, which could equate to over 14 million EVs in Texas alone,” she said.

Like many who have already made the leap to EVs, Tanner and Layce Smith are not looking back.

“You don't realize how slow and smelly and noisy a gas car is until you drive an EV,” Tanner said, with Layce adding, “We are already satisfied with our choice to drive an EV, and as the electric technology advances, there will be fewer reasons to even consider an ICE vehicle.”