DFW vs DAL: Which airport is greenest? 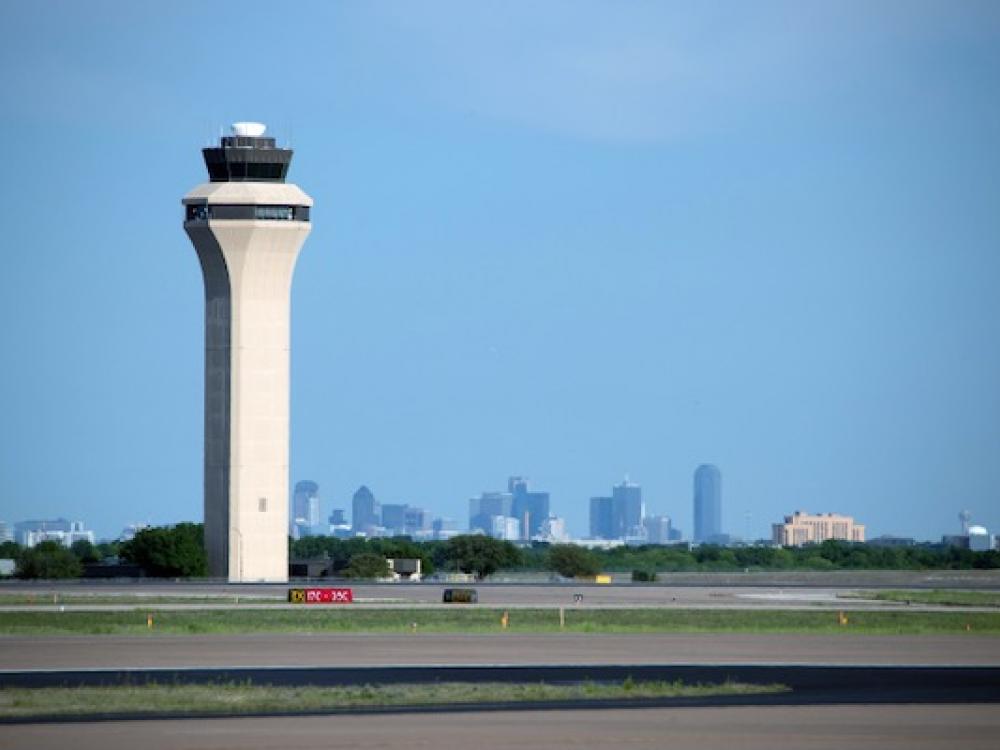 Dallas Fort Worth International Airport was the first airport in North America to receive carbon neutral status when it reached the milestone in 2016. Courtesy of DFW Airport.

North Texas is known for its good-natured rivalries. Dallas or Fort Worth? TCU or SMU?

For many North Texans, comparing the two airports is like trying to compare apples and oranges. While the two airports support our region by connecting us to the rest of the world, they are quite different in how they serve their customers.

But what about sustainability? Is there a clear winner in the race to determine which airport is the greenest? Before we try to answer that question, let’s take a closer look at each one:

DFW is enormous. As a true “superhub” airport that connects the North Texas region to the rest of the world, the numbers are impressive to say the least:

• More than 73 million customers pass through the airport every year, making DFW the second-busiest airport in the world.

• At 27 square miles, DFW is larger than the island of Manhattan, and is the second-largest airport by land area in the US after Denver International Airport.

• Producing more than $37 billion in economic impact each year, DFW is a major economic engine for the North Texas region. 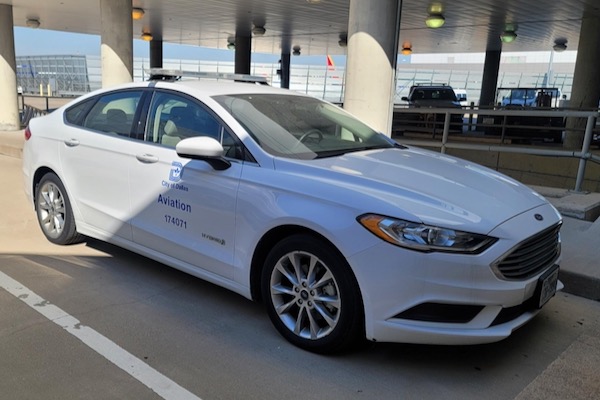 While DAL is a much smaller than DFW in terms of number of customers served, its economic impact, and its footprint, it also boasts some notable statistics:

• DAL customers can select from more than 145 destinations

• As a City of Dallas entity, the City received over $47 million in revenue from taxes, fees for licenses and permits, and other revenues from DAL operations.

Though the story of DAL and DFW could be touted as one of David versus Goliath, when it comes to sustainability, size really doesn’t matter.

THE RACE TO ZERO

Perhaps the largest contribution that an airport — or any business — can make when it comes to truly affecting climate change is achieving net zero carbon status.

Terms such as “carbon neutral” and “net zero carbon” that are associated with removing harmful gasses out of the environment have been used interchangeably over the years, but they are different.

Being carbon neutral is typically earned on the way to attaining a net zero carbon status. DFW achieved carbon neutral status in 2016 and was the first airport in North America to do so. (Note, the airport’s carbon accreditation rating does not include carbon emissions from airplanes as the airport does not determine which aircraft an airline operates at the airport, according to the Star-Telegram.)

Being carbon neutral means that the amount of carbon being emitted into the atmosphere is also being removed in some other form or fashion, often referred to as “offsetting.” 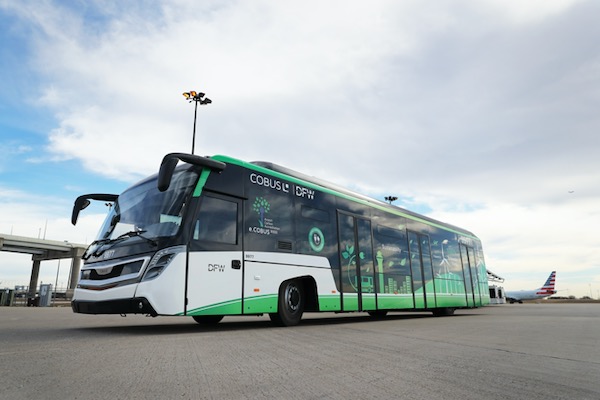 DFW Airport’s fleet of COBUSES is used to move people on the airfield during special operations. DFW Airport’s newest COBUSES are electric. Courtesy of DFW Airport.

As a true global leader in airport sustainability, DFW has developed a Roadmap to Net Zero Carbon that is based upon three components: a continued transition to renewable energy sources, optimizing their facilities and fleet to maximize efficiency and using carbon removal technologies.

“Electricity was the largest component of DFW’s carbon footprint. Transitioning to 100 percent renewable electricity was an essential step in achieving and maintaining carbon neutrality and reducing our electricity costs,” Ziomek said.

DFW is also keeping it local in terms of buying its electricity since 100 percent comes from Texas wind farms.

DFW’s sustainability efforts can also be seen when it comes to using water more efficiently. Since 2012, the airport has reduced its potable water usage by 675 million gallons through several initiatives such as installing efficient plumbing fixtures in the terminals and office buildings, incorporating drought-tolerant landscaping, and upgrading to smart meters that help diagnose leaks faster.

In addition, the airport launched a small pilot compost program in one terminal restaurant in 2021, reported WFAA in August. The program has grown to include 25 restaurants in three terminals. DFW Airport says more than 100 tons of trash have been diverted from local landfills 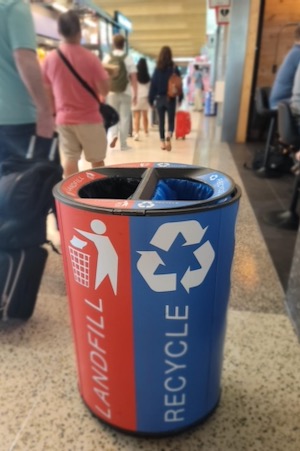 As an airport located in a dense urban area of Dallas, DAL’s approach to sustainability reflects the fact that it is surrounded by neighborhoods and businesses. Almost every part of the airport has benefitted from a huge push to make the terminal, the parking garages, and many other facilities more efficient when it comes to energy usage.

These initiatives include making the terminal LEED certified, installing EV charging stations in three parking garages (A,B,C) and conducting a feasibility study of solar power use as a form of renewable energy.

DAL staff are even currently conducting a jet wind prototype study with the intent to capture actual jet wind during taxi and reuse it as a local energy source.

DAL also uses subtle cues throughout the airport to encourage its customers to think green. Dual trash cans — one side for trash, the other side for recycling — are featured throughout the terminal. Three liquid disposal stations are located near the entrances to TSA security lines to help minimize waste.

“In 2017, a waste audit was conducted that allowed us to identify large amounts of liquids in waste receptacles pre-TSA,” said Environmental Operations Manager Sana Drissi. “These stations allow passengers to discard their liquids before entering the TSA security lines where limitations apply.” 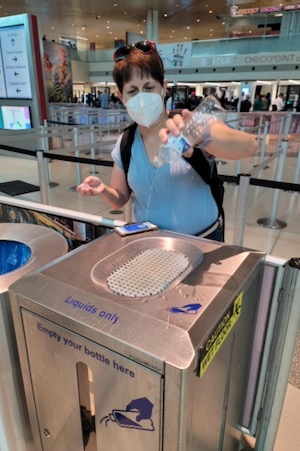 By removing liquids from their waste, DAL significantly reduces the weight of waste entering area landfills.

Speaking of reduction, the airport has reduced its carbon footprint when it comes to its vehicle fleet as well.

“Almost a quarter of our fleet is fueled by natural gas or electricity. Currently, we own nine Compressed Natural Gas (CNG) vehicles and 11 hybrid vehicles, representing 24 percent of our total fleet count,” Drissi said.

So which airport wins the sustainability prize? The Airport Carbon Accreditation Program rates airports on a six-tiered scale — 1, 2, 3, 3-plus, 4, or 4-plus — when it assesses an airport’s efforts to manage and reduce their CO2 emissions. According to the independent global entity, DAL has earned a Level 3 accreditation and DFW is at Level 4-plus, the top score.

While DFW is a clear leader when it comes to sustainability on a global scale and can showcase what other airports and even other industries can and should be doing to reduce their carbon footprint, DAL offers many examples of what we as individuals can do to help impact climate change. Recycle instead of just throw away. Empty liquids out before discarding their containers. Switch out old incandescent lightbulbs to more efficient LEDs. Consider an EV or hybrid for your next vehicle purchase.

As we continue to combat climate change, both airports showcase what can be done at all levels, from massive, global efforts down to our individual habits. Systemic change on multiple levels is the only way that lasting change can happen and, as a DFW resident, I’m glad that both of our airports are taking such huge strides when it comes to sustainability.

Colleyville-based writer Mark Fadden has been a scribbler for nearly 20 years and has covered everything from the state of jobs and careers in Fort Worth to unique spirits that might bring a little respite to the end of a stressful week. When he’s not writing about the news and events that shape our lives here in North Texas, you can find him struggling to keep up with his two strapping teenage boys, trying to keep his wife of 21 years happy (sustainably, of course) and separating out the non-recyclable plastic that the three people mentioned above keep throwing in the recycling bin.