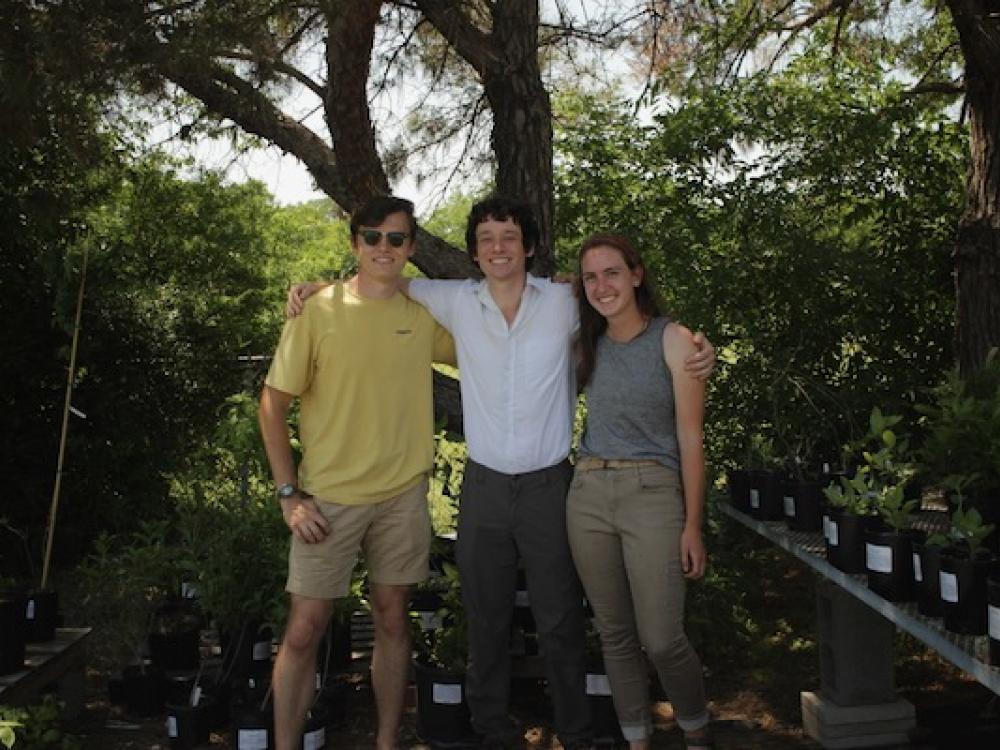 Three University of North Texas grads are on a mission to help local wildlife.

With urban sprawl spreading out, Molly Burke, Taylor Phillips and Jesse Stanford saw that DFW had only a few natural areas and parks left where ecosystems could thrive. Meanwhile housing developments, shopping centers, parking lots and highways in North Texas were taking the place of native habitat.

The UNT ecology majors saw a need for a different kind of landscaping business. 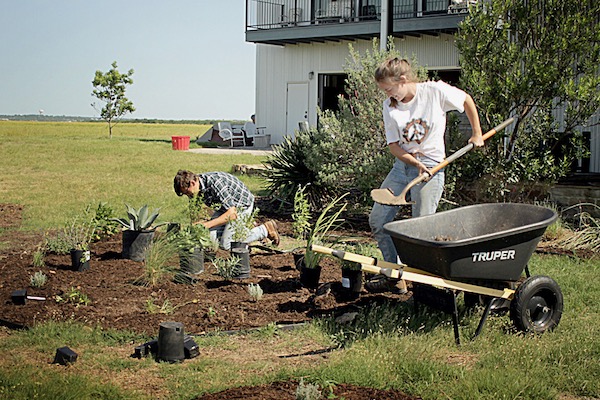 Taylor Phillips and Molly Burke work on an installation. Courtesy of Wildscapers.

So after graduating last year, in January, the trio launched Wildscapers Landscaping Company. The Denton-based business focuses on planting only Texas native plants, which wildlife needs to survive.

A “wildscape” is defined by the Texas Parks and Wildlife Department as a safe harbor in which wildlife can find the resources they need.

“Creating pockets within the urban community, you create islands of native plants that wildlife can jump to, from one to the next,” says Burke, “Wildscapers strives to create an ecological corridor to help the migratory species pass through the urban areas, as well as reestablish the region’s wildlife population.”

Native plants include the grasses, trees, shrubs and wildflowers that grew in the region before the European settlers. They are now recognized for having adapted to the local soils and climate, providing food for birds, attracting native pollinators, being low maintenance and maintaining biodiversity.

“With all of the land being leveled and then being replaced with Bermuda or St. Augustine grass, the habitat is being eradicated,” says Phillips. “We can reintegrate the entire system in your yard to provide those micro habitats and to become habitat corridors.”

The friends earned their landscaping chops while at UNT.

They helped restore a section of the UNT’s Discovery Park, north of the main campus, with native tall grass prairie. The first challenge was fighting the water thirsty Bermuda grass before planting natives on the four-acre Pecan Creek Pollinative Prairie. 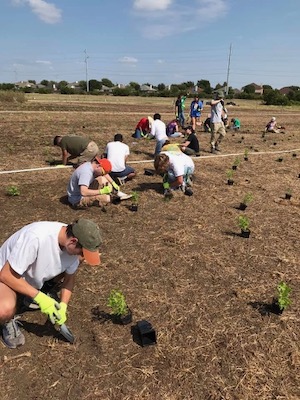 Ecology Laboratory and the Society for Ecological Restoration students planting over 8,000 native plants. at the UNT Pollinative Prairie in October. Photo by Jaime Baxter-Slye.

As a student, for her senior project, Burke studied root systems to discover which plants thrive the best in North Texas.

Phillips said educating homeowners on the benefits of native plants has became their first task.

A big selling point is that while nonnative plants may grow faster, they need more water and won’t survive the hot Texas summers. Native plants survive in Texas because they have deeper roots. Once rooted in the ground they will need less care and a lot less water to stay green and flower, he said.

An archived Environmental Protection Agency article says native plants, once established, save time and money by reducing the need for fertilizers, pesticides, water and lawn mowers.

Lindsey Ebert, nursery manager at the Painted Flower Farm that specializes in native plants in Denton, says native plants are still a mystery to many gardeners.

“A lot of people who come out here are interested, but don’t know where to begin,” she says. “It’s really fun and exciting to see these guys so passionate about conservation and native species,” says Ebert, who adds that the landscaping business is just now seeing young people interested in the profession.

North Texas offers a unique and challenging eco-region, because it’s at the intersection of the Blackland Prairie in Dallas County and the Cross Timbers region in Tarrant County. Choosing the right plant for the soil can be tricky.

Around the country, native plant groups have been popping over the last 20 years to provide a resource for gardeners.

The Native Plant Society of Texas, headquartered in Fredericksburg, was an early promoter. Founded in 1981, it's been encouraging conservation, research and the use of native plants for four decades.

Phillips sees Wildscaper's mission to be consultants to homeowners and help them choose which plants fit their taste and needs.

“Our preferred mode of business is to implement the designs and install the native plants and give them an idea what it will take to manage them for the long term,” says Stanford

Some communities may have “weed laws” to prevent unsightly or poorly maintained property. EPA reports communities are changing the rules, but often require a “setback or buffer strip to make the landscape look planned.”

Wildscapers have found it takes a couple of homes in the neighborhood to get other neighbors to realize, “oh that’s a good idea,” says Burke. 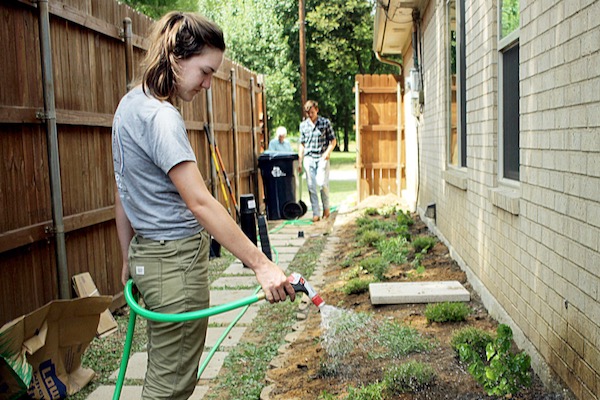 Molly Burke and Taylor Phillips finish up an installation. Courtesy of Wildscapers.

Accepting climate change as fact, Burke says the DFW region will probably be experiencing a major shift in what can be grown in the area.

“You have to be aware of what is adaptable to the change. The easiest way is to pay attention to the green space that exists, the local parks and nature spaces. Take note as to what is growing there and what is shifting.”

The Wildscapers believe native plants will build up a tolerance to the increased heat.

Stanford says for example, if you plant 20 of one species of native plant, seven may die.

“The remaining thirteen have adapted, so they can still be viable long-term,” he says. “It’s a process of experimentation and adapting to change.”

Many exotic plants sold in nurseries are doing more harm than good.

“When the invasive species are in your yard, they’re taking up space a native can use. And the overall species interaction is just not there. So even though your yard is green and lush, it’s essentially ecologically dead.”

BUSINESS, NOT AS USUAL

Wildscapers Landscaping Company‘s first year in business is going well despite the pandemic. It seems with Covid-19 trapping people at home, many homeowners looked out their windows at their gardens and got motivated to start planting.

The trio says their business has gotten off better than they’d expected.

They added now is the time to be putting in your native plant garden.

“Many people think the best time to plant is in the spring, it’s not,” says Burke. “Make sure you plant as far away from summer as possible and get the bushes in the ground in the fall.