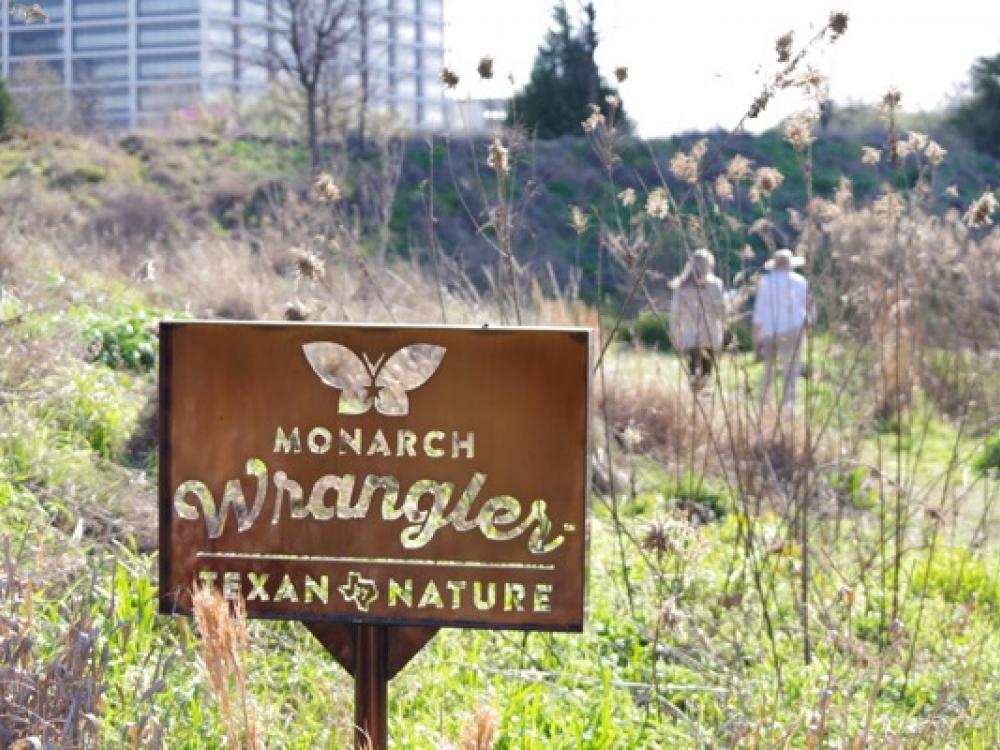 Dallas landscape architect, city planner and University of Texas at Arlington professor Kevin Sloan talks about rewilding, a global trend in landscape design that plans for the inclusion of native wildlife as well as native plants.

Texas Green Report: Bees, butterflies and birds thriving throughout the Dallas-Fort Worth area? How rewilding could create a paradise for both people and wildlife in this episode of the Texas Green Report, a production of Green Source DFW and the Memnosyne Institute.

As cities expand and wild places feel the pressure of human activity. Biodiversity has dwindled, putting countless numbers of plants and animals at risk of extinction. Rewilding is a process that may help to reverse this trend.

Kevin Sloane: Rewilding is a process about balance. It's about taking sites and landscapes and putting the natural life - the song birds, the birds, the bees - in balance with what that site can accommodate, even to the point that you're mindful to provide shelter for them as if they are the first priority.

Texas Green Report: Kevin Sloane is a Dallas-based landscape architect and educator who speaks internationally on the topic of rewilding

Kevin Sloane: Rewilding starts with a program of identifying the species that a site can can shelter. That program of species -plant and animal life, sometimes amphibian life - essentially begins to suggest specific relationships, right?  You have to have the plants and certain combinations and cover and so forth. And then in the same thought process, as that human activity is then mapped into that rewilding landscape, carefully, intelligently. So the two conditions can go exist. Most individuals will think first, that it will look like a reconstructed prairie meadow, it can, if the species that are attracted to that kind of environment are appropriate to that place. It can look like a native plants project. If it's near drainage issues, it could look like a riparian landscape, full of reedy things that would be commodious to amphibians, and to filtering water and taking certain things out of the water, before they go further downstream. They can look like groves of trees where the species might need wooded materials - trees and large shrubs - for the kind of habitat you need to construct. So they are as diverse as the biodiversity and its objective that you're trying to recreate and shelter.

Texas Green Report: North Texas stands out among regions throughout the world for its rewilding potential. And that's because despite the area's growth, it's still sparsely populated.

Kevin Sloane: The Dallas Fort Worth Metroplex covers 13 Texas counties - seven half a million acres. And all of that settlement, incorporated area, police services and so forth, covers about seven and a half million people. Astonishingly, if you do some back-of-the-napkin math, you find that we have settled and created a pattern at a human density of one person per acre on average. Some places are a little denser and tighter. But on average, it's one person per acre. That's astonishing when you consider that New York is well over 100, San Francisco's 27. Paris is about 103. Boulder, Colorado is about four. Boulder, Colorado is four times as dense as DFW. What's unique about this is two things - One, that low density has created a lot of residual open space, which has allowed the wildlife to take hold inside of the city limits. We have bald eagles, nesting inside of Dallas. That is a remarkable, remarkable phenomenon. We have two species of lynxs - we commonly call them bobcats - which are traversing through the watershed corridors. This is wildlife. We have a city that's teeming with wildlife. That's the first thing. The second thing is, is the watershed network. The watershed network, being what's left of the Blackland Prairie, that the construction of the city replaced, is coursing with water, it's coursing with vegetation and habitat. Some of it is obviously affected by invasive plant species. But we have the two things coming together to produce what could be paradise. If we could manage it, we would have a city that's just threaded with nature, with paths, with connectivity, with shade, with water, with wildlife that we ultimately are coexisting with in a condition of balance. That's what's extraordinary. The species that are rewilded Texas landscapes could attract would start with migrating insects, bumblebees, honeybees and then it would proceed to pollinators, butterflies and so forth. The list could be extended then to include indigenous birds, but also migrating birds, song birds and so forth, that come through, like wax wings, and so forth that come through this particular area.

That list then, if the situation would allow, there's a pond, or a creek could begin to entertain waterfowl - ducks, small ducks, teal. The list then could extend into amphibious  creatures - frogs and so forth. And so these are simple lists that can be constructed. You start with the smallest of the creatures and then essentially move towards the mammals through the avian creatures into the amphibians. And then if you really want to go for the for the gold, if you have a pond you can get a permaculturalist or a limnologist? or a friendly biologist involved to look at what's living in the water of your pond, or your neighborhood park to really complete the cycle.

If you want to get going as a society rewilding - certainly Dallas-Fort Worth, a seven half million acre Metroplex - there's kind of a hierarchy of opportunities. The first hierarchy are the obvious kinds of real estate fragments, rights ways along railroads, along highways, you know, splinters of islands and so forth that we mow as if they’re golf course fairways. We need to stop doing that and we need to rewild those kinds of environments for less mowing. Mowing that puts carbon emissions in the atmosphere and essentially make them beautiful kind of thick, matted pollinator attracting and habitation surfaces. That's the first thing. The second thing, the next thing, are cultivated landscapes that you see in office parks, where we're mowing vast amounts of turf grass, largely for curb appeal.

Remodeled landscapes are more beautiful to begin with, because there's more color, there's more biodiversity. They attract flying sculptures like beautiful songbirds, mockingbirds, hummingbirds and so forth. That's kind of the next tier that I would say to any property manager, why do you mow the whole bloody acreage, when maybe you just need to maintain the critical parts that are close to the buildings where human activity is more concentrated. That's the second hierarchy. And then the final hierarchy might be along our branch waters network, like down through the Trinity corridors, where there's water, there's already wildlife, there's already trees, there is already deep top soil. But these are environments that have been contaminated by decades and centuries now at this point of run off and invasive species. We need to get into these branch waters and get the privet out of them, get these invasive plants out. Clean them up, limb them up, do a little bit of TLC on the tree habitat that has been kind of neglected because we haven't allowed certain natural processes to happen. And return these to a more kind of biologically functioning environment. That's kind of the final level, I think of a three-tiered kind of strategy to actively reintroduce or introduce rewilding into metropolitan situations.

Kevin Sloane: Airfield Falls is part of a large trail system that follows the creeks and the waterways of the Tarrant County Regional Water District. When you drive there, you'll arrive in a car park that has water harvesting, parking lot, some picnic tables and family shelters, you'll leave that area and cross a bridge and follow a quarter-mile path. You feel like you're going somewhere else because it's just you on this path. That piece, that trail is the rewilding landscape that you'll see predominantly on the non creek side of the path. The path takes you to a natural waterfall in the creek, which we left untouched. When we first saw it, we recognized it was a relic of the original blackland prairie. And so rather than do something spectacular with it architecturally, we left it untouched so you can see it as it has been seen for centuries. We installed a butterfly garden along the quarter-mile path. It takes you from the the trailhead park back to the waterfall. The butterflies showed up so thick, you had to brush them away from your face. It was extraordinary and colorful, kind of atmospheric beauty. Then some turkey showed up, presumably after the butterflies and then some bobcats showed up after the turkeys. You know, I was raised in Kansas and my father once told me that it was tantamount to a religious experience to see one of three creatures. a hummingbird, a male wood duck and a bobcat. They're so wary and they're so beautiful that if you get to see them, they have given you permission for that particular privilege. Now at Airfield Falls, you can go see bobcats. This mysterious creature and all these beautiful butterflies right next to a former Air Force Base.

We can't survive without a biodiverse planet to support us and to rewild is essentially an action that will help save the planet. We all can rewild. I don't understand why we shouldn’t.