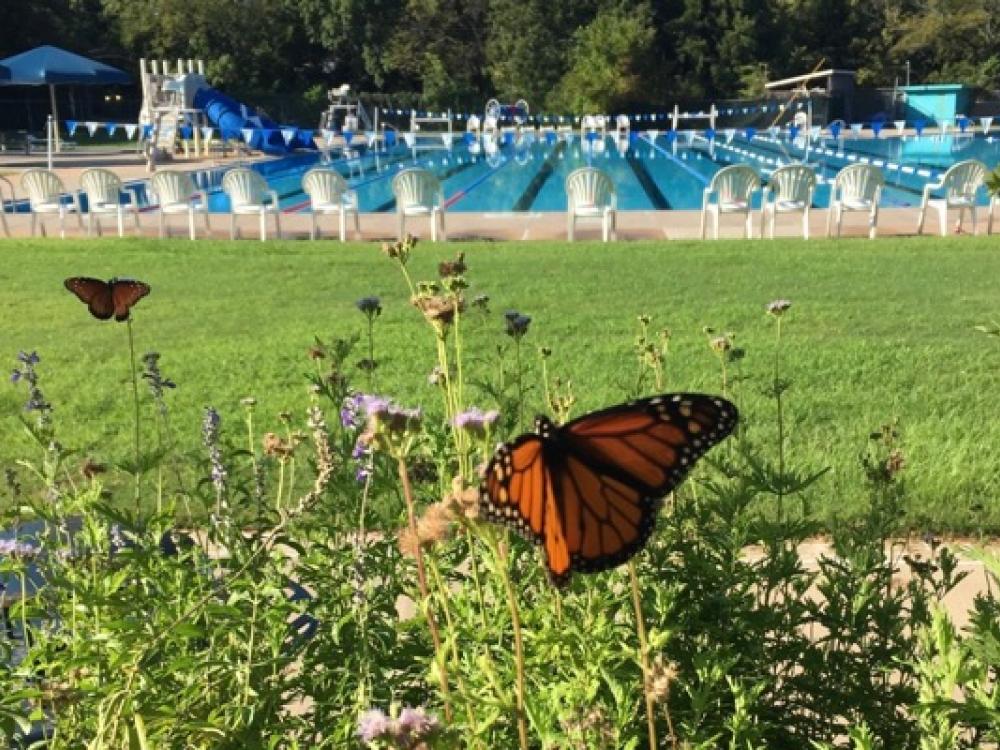 A monarch waystation was installed at the Forest Park Pool in Fort Worth by the North Central Texas Chapter of the Native Plant Society of Texas in 2016. Photo by Kim Conrow.

DFW is the fourth busiest airport in the world with thousands of travelers funneling through the region each year. Likewise, North Texas is a stop for another visitor on the wing - some of the millions of monarchs that fly through Texas on their annual migration.

While urban sprawl has destroyed many of their natural rest stops in DFW, fortunately local wildlife lovers have stepped up efforts to create waystations for the iconic butterflies. 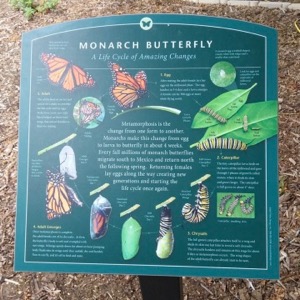 Signage installed by City of Fort Worth at the Forest Park Pool in Fort Worth explains the life cycle of the monarch. Photo courtesy of the NCT NPSOT chapter.

In late March and early April, migrating monarch butterflies flutter through on their way to the northern U.S. and Canada after overwintering in the mountains of southwestern Mexico. The migration reverses direction spectacularly around the third week of October, when the copper-colored flyers can be seen in great numbers sailing southward though the Metroplex.

Floating solo and in flocks, and clustering in trees and local gardens, the monarchs on their grand adventure – around 3,000 miles each way – bring out a groundswell of local well-wishers committed to ensuring a productive trip for the airborne legions of Danaus plexippus.

Dallas, Fort Worth and many other North Texas cities have signed on to the National Wildlife Federation’s Mayor’s Monarch Pledge, a tri-national initiative to encourage mayors and other local government leaders to take community-wide actions to help save the monarchs. Evidence shows an overall 90 percent decline  in monarch populations from historic levels. Their dwindling numbers correlate with the loss of milkweed habitat attributed to overuse of herbicides. Milkweed is essential to the monarchs’ survival. It is the plant on which monarchs lay their eggs as well as their caterpillars’ sole food source. Pesticides, habitat loss and collisions with cars and trucks also have been cited as factors in the butterfly’s dropoff. The U.S. Fish and Wildlife Service will determine in 2020 whether to designate North American monarchs as endangered. 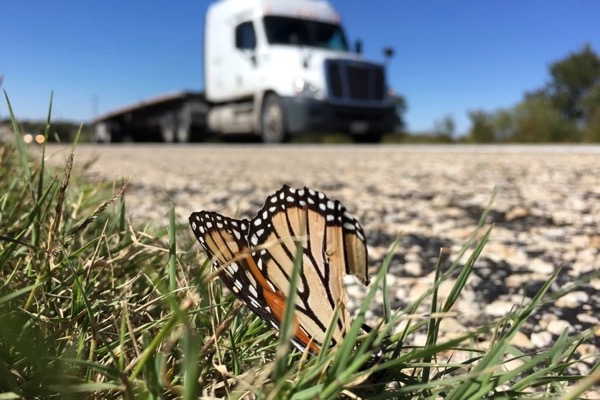 It takes four to five generations of monarchs to complete their transcontinental round-trip. No single butterfly makes the whole journey. The direction of their migration determines the mix of plants they require. Southbound travelers in the fall need abundant nectar flowers for fuel, while those on the northbound leg rely additionally on milkweed. Once eggs laid on milkweed are hatched, the voracious monarch caterpillar feasts prodigiously on the plant before metamorphosing to chrysalis then to butterfly. In a mystery that continues to flummox scientists, southward-migrating monarchs are physically more robust with a lifespan of up to eight months, while their northbound descendants are more delicate, less adept at flying and live only five to seven weeks.

In North Texas, local organizations, governments, schools and individuals are creating a broad geographical distribution of monarch-friendly gardens and fields to help the peripatetic butterflies along their way. Two such plots are a recently planted garden adjacent to the Flower Mound town hall, and another at the 113-year-old Thistle Hill House Museum, a preserved historic home in central Fort Worth. 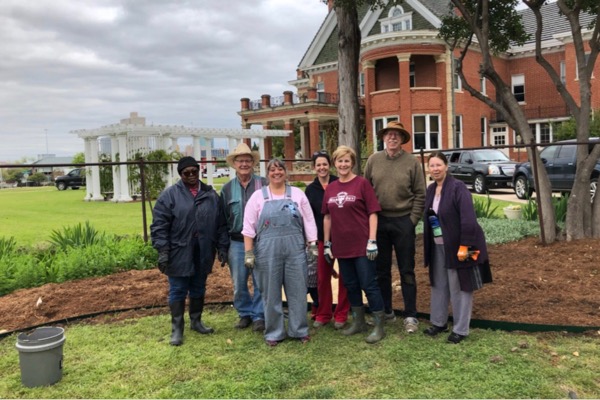 Keith Olmsted, the lead Master Gardener at Thistle Hill, designed and oversaw the recent installation of a “monarch waystation,” a specific type of garden prescribed by the conservation group Monarch Watch that provides milkweed, nectar sources and shelter needed to sustain monarchs during their migration. 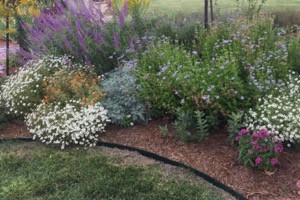 The new monarch waystation at Thistle Hill in Fort Worth. Photo by Keith Olmsted.

“The project took approximately two and a half months from the time we broke ground to amend the soil, complete the brick walkways and plant most of the plants,” Olmsted said. “Plants include fall aster, milkweed, yarrow, frog fruit, blackfoot daisy, zinnias, sage, salvos, coneflower, Turk’s cap, hyssop, mistflower and lantana.”

As a result of Olmsted’s work, and with the help of his interns, known as the Winecups, Thistle Hill’s monarch waystation has received its certification from Monarch Watch. 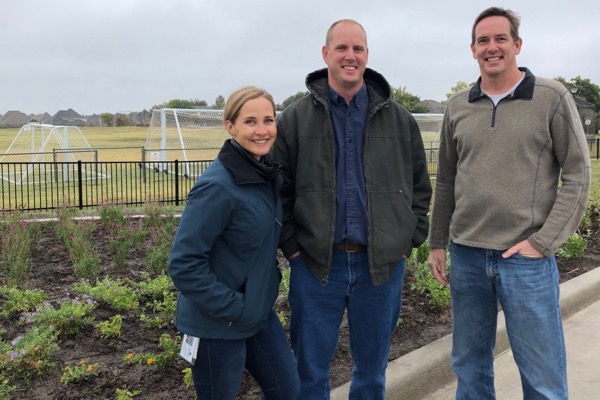 Thirty-five miles to the northeast in Flower Mound, a combined group of volunteers and the town’s environmental and park staffers installed a similar monarch waystation adjacent to the town hall, the latest in an ongoing push to increase the number pollinator gardens in the borough. 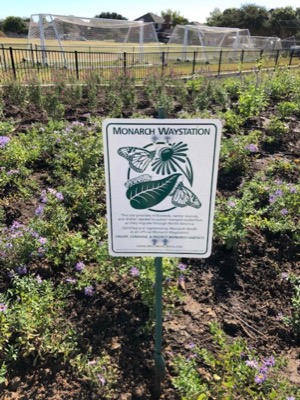 "The Town of Flower Mound has a long tradition of sustainable community development practices and environmental education,” said Tom Kirwan, a Flower Mound resident for more than 20 years and a long-time pollinator conservationist.  “[The] recent monarch garden contribution is another indicator of the commitment to sustainable choices our town's leadership continues to make in the best interest of our citizens."

While smaller communities all over the Metroplex take steps to support monarch migration, the area’s biggest cities are doing their part, as well. In April, Fort Worth became only the fourth city nationwide to receive the National Wildlife Federation’s Monarch Butterfly Champion City designation for exemplary monarch conservation efforts. Earlier this month, the City of Arlington, earned the NWF designation after installing monarch waystations at more than 20 parks. Meanwhile, Dallas has shifted into overdrive to propagate pollinator gardens throughout the city. 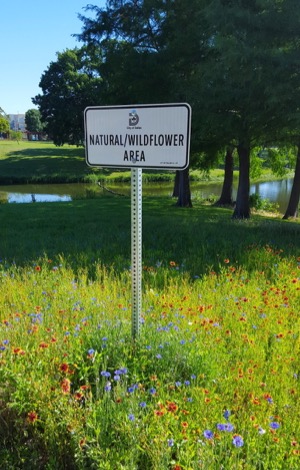 A pollinator garden in Lake Cliff Park in Dallas. Photo by Monica Johnson.

Brett Johnson, senior environmental coordinator for the City of Dallas, said the parks system already has established about 16 certified monarch waystations (with more awaiting certification) as part of a comprehensive plan to support pollinators over broad geographic swaths.

“We have about 114 wildflower areas across the city that make up about 97 acres, and this winter we’re adding between 11 and 16 acres to that,” Johnson said. “A lot of these are along our linear trails, which help provide connectivity between larger patches of habitat.”

A rotational mowing cycle ensures that the flora always support the native fauna, and that plants crucial to pollinators are abundant at the appropriate time of year.

“We try to leave about a third of the habitat standing at any given time so that when we’re wrapping up the mowing cycle, the area you started with might not even look like it ever got mowed,” Johnson said.

A pre-season mowing in January or February, before the spring green-up, can help spread seed, especially milkweed. 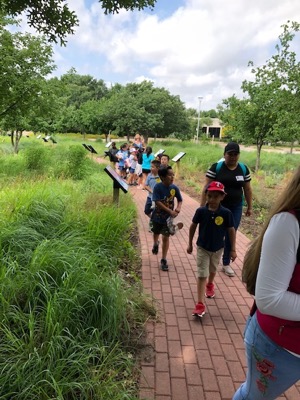 Students explore the pollinator path that winds through the Botanical Research Institute of Texas parking lot. Photo by Tracy Friday.

“When we get into March or April, we’ve got a pretty good, strong stand of milkweed going,” he said.

Work crews typically won’t mow wildflower areas again until the June time frame, when blooms have faded or the area is overtaken by Johnson grass.

In Fort Worth, the same type of rotational or “conservation” mowing is being undertaken, with many areas transitioning from more frequent mowing to natural habitat, said Fort Worth Botanic Garden Entomologist Gail Manning.

“Tarrant County College, for example, has an area on their South Campus where they’ve planted milkweed and reduced the amount of mowing there,” she said.

At the Botanic Garden, a “pollinator path” comprising a series of braided walkways links the Garden grounds with the Botanical Research Institute of Texas. The path features trees and seasonal plants that attract pollinators ranging from hummingbirds and bees to monarch butterflies, Manning said. 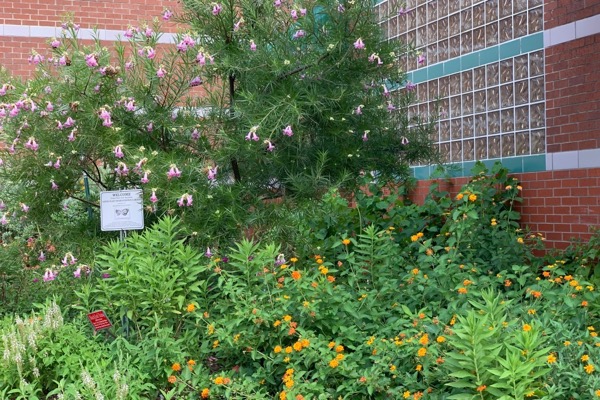 The pollinator garden at the Southwest Branch library in Fort Worth was installed by the North Central Texas Chapter of the Native Plant Society of Texas in 1997. Photo by Kim Conrow.

Four miles down the road at the Fort Worth Public Library’s Southwest Regional branch, the Hulen Library Demonstration Garden is an early example of a pollinator garden used to educate the public about how native plants can be used in an urban landscaping environment. The Hulen garden was established in 1997 and is maintained by the North Central Texas Chapter of the Native Plant Society of Texas. Additionally, the Fort Worth Parks and Recreation Department also partnered with the Native Plant Society in 2016 to establish a monarch waystation at the Forest Park Pool adjacent to the Fort Worth Zoo. 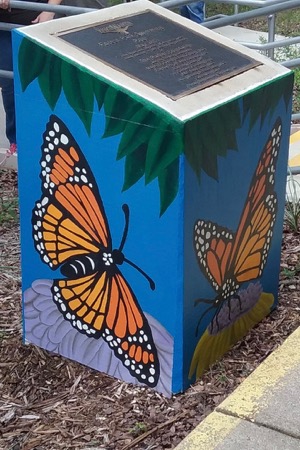 While governmental agencies and other organizations do their part to support monarchs and other pollinating insects and birds, your own backyard can be an important piece of the pollinator puzzle, too.

“The time to plant seed is now,” the Botanic Garden’s Manning said. “Or you can plant a four-quart pot for immediate results and help butterflies the next day. The important thing is getting it out there.”

If you’re interested in hosting your own monarch waystation, the Xerces Society's Monarch Nectar Guides can help you find the appropriate monarch nectar plants for the DFW region.