What can a climate emergency teach us? How to be human again 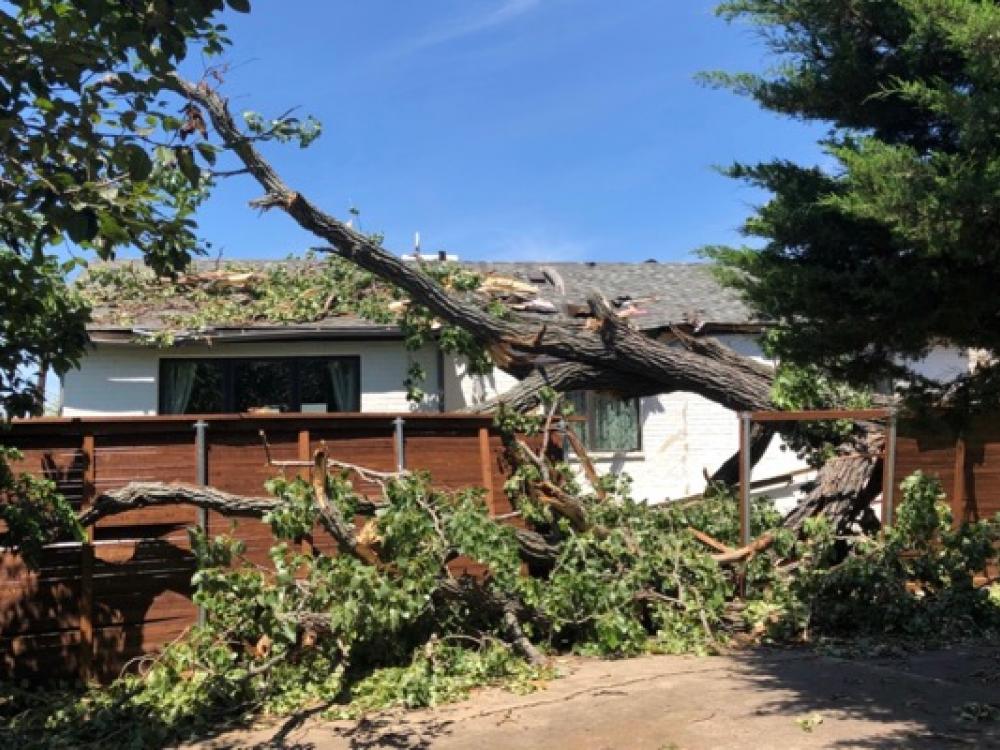 Dallas environmental journalist Anna Clark reflects on the June 9 Dallas storm in which hundreds of trees were toppled, 350,000 residents lost power and one person was killed. Above, a tree felled in a Dallas neighborhood by the storm. Photo by Dick Guldi

When my co-worker said Pilates saved her life, she wasn’t exaggerating.

“My Sunday afternoon class was the only reason I wasn’t at home or in the garage when the crane collapsed into our building,” she told me.

Five days later, she was still visibly shaken from the fatal accident that took the life of her neighbor when a wet microburst struck Dallas on June 9.

Calling the weather event a “rain bomb” in its picture of the week taken from a similar event in 2017, the Washington Post describes a microburst as “a sudden but powerful area of sinking air, associated with the downdraft area of a thunderstorm.” Typically small in diameter, microbursts can do incredible damage. With wind speeds in excess of 100 mph, some microbursts have done so much harm that their destruction can be mistaken for tornado damage.

I can attest that being inside a moving vehicle when the storm hit felt like being tossed around in a hurricane. The plan had been to drive my mother home and to drop off my daughter and her friend at the mall on our way. Ten minutes into our trip, visibility suddenly dropped and rain slammed into our car from all sides like jets at a car wash. As cars competed for shelter under the overpass, we were forced to sit exposed while hail pelted our car and flying tree branches threatened to come through the windows.

The storm that wrecked so much havoc in less than an hour brought to the surface warnings I have encountered from two decades of reading on environmental degradation. According to The World Resources Institute, hundreds of millions of people in urban areas across the world will experience rising sea levels, inland floods, more frequent and intense storms, and more frequent periods of extreme heat and cold in the coming years.

The fallout from the Dallas rain bomb offers a glimpse into a future confronting urbanites across America if storm intensity and frequency continue to worsen, as scientists predict with climate change. Most cities still lack resilience, and citizens lack awareness, for how to prepare for an uncertain future. After the storm in Dallas, which knocked out power for 320,000 homes, many of us were given a rare chance to rediscover life before technology took over – and it wasn’t all bad.

As problematic as lack of preparedness is, my time in the dark opened my eyes to the positive side of losing power. With the internet down, we had to talk to our neighbors again. Wandering outside and across the street was how we exchanged information about where to buy food, where to get help and who might need our help. With the lights out, we discovered that we could cook by the light of candles and the gas stove. And with the A/C down, we fell asleep to the hoots of owls and hums of crickets, and the breeze of open windows.

In the mornings, we read books while the kids played board games. I drank coffee I made in my French press. Neighbors came by with bits of news, such as the sad story of the crane accident. And in the days that followed, friends’ Facebook posts reflected concern for neighbors and gratitude for family – reminders of the desire for meaningful connection we feel most acutely in times of severe stress.

What do you do when you have no power? You get a guest apartment at Nana’s retirement community! #livingthedream

The feel-good contagion has tapered off now that the fervor has died down, and the power and wi-fi have returned. But back at our downtown office building, my co-worker is still reeling from the tragedy that struck Elan City Lights, whose tenants recently learned that the building is unstable and they will be permanently relocated.

“I feel like I’m trapped in some dream. This kind of thing makes you think about your life, and what you should be doing with your time here,” she said. “You’re not dreaming,” I replied. “You are awake, and I hope you will stay that way.”

To think about the meaning of life, even when it hurts, is to be human. Too many of us go for too long without asking the question because we are too busy to take time for such a luxury. For me, the microburst was a reminder that the present is a gift, and it’s worth the effort to slow down, to breathe and to enjoy the feeling of being alive, even as we strive to adapt to an uncertain future.

The event was also a reminder to increase my own resilience by building my knowledge base. The U.S. Climate Resilience toolkit is one of many available resources containing information on how individuals and cities can increase preparedness. And when I’m done with that, I may even get around to trying out a Pilates class. From what I’ve heard, it could change my life.

Anna Clark is the Dallas-based author of "Green, American Style: Becoming Earth-Friendly and Reaping the Benefits." She is the founder of EarthPeople Media and the co-founder of the Inclusive Economy Consortium. For more on her writing, visit AnnaMClark.com. Contact her at Anna@EarthPeopleMedia.com.