Where to see bald eagles in North Texas 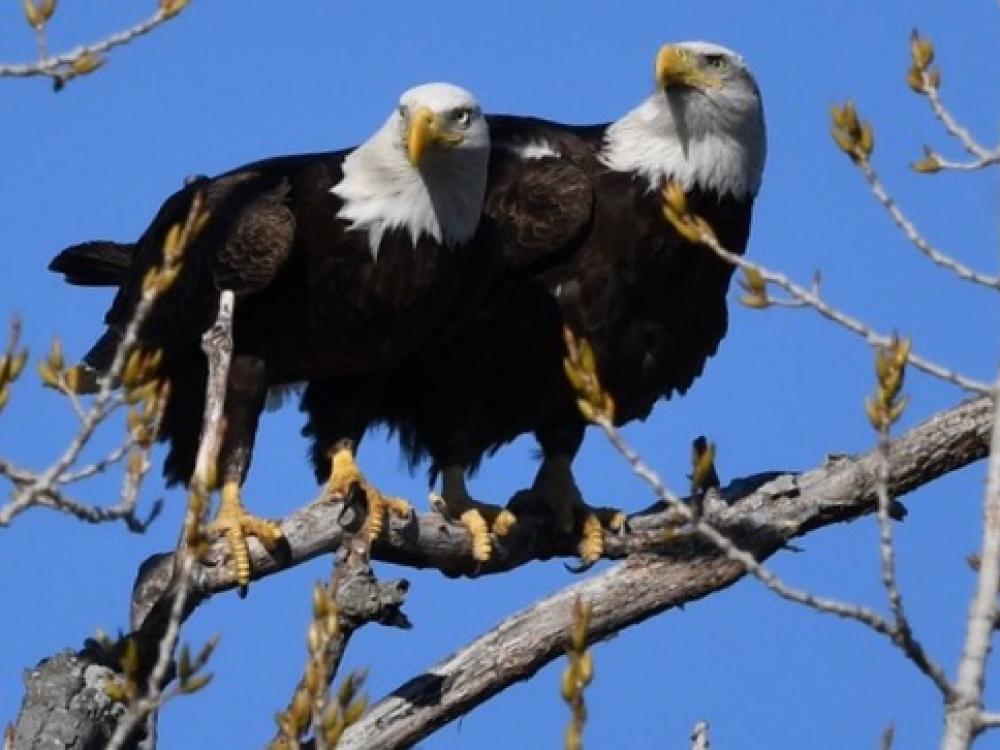 Nick and Nora were spotted at White Rock Lake the day their nest blew down. Photo by Robert L. Goodman, Jr. (c) 2022.

Undeniably impressive, they boast a wingspan of over six feet with a gleaming white head and chocolate brown feathers when fully mature. Much easier to see than songbirds, but use binoculars for close-ups.

While the pair at White Rock Lake made headlines in Dallas (read about them here), bald eagles inhabit many North Texas reservoirs, rivers and wetlands. Below are some of the prime viewing spots.

Nick and Nora at White Rock Lake are considered "celebrity eagles" due to their high visibility. They aerial roam the entire lake, as well as White Rock Creek downstream from the spillway and upstream to East Northwest Highway, making them widely photographed.

Rather than trying to catch them on the nest and risk disturbing them, look for the eagles hunting, fishing or resting in treetops. Here are some of their favorite haunts:

• Along Dixon Branch, which runs under Buckner between the Stone Tables and Celebration Tree Grove.

• At Sunset Bay, marked on Google maps as Pelican Point. Also see no. 6 location on Dallas Parks and Recreation map.

• Shallow waters at the lake's northeast end between the marinas and Mockingbird. 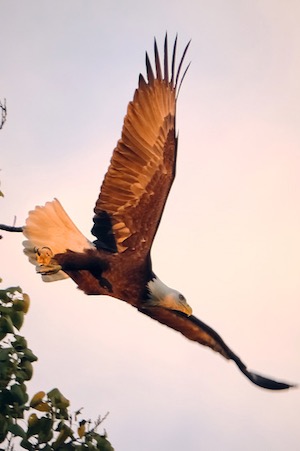 One of the White Rock Lake eagles takes flight from a cottonwood. Photo by Adam Velte.

But you don't have to visit White Rock Lake to see Nick and Nora. A plethora of imagery resides at the White Rock Lake! That's my hood group on Facebook.

The eagle luminaries even have their own YouTube channel. The private school Dallas Academy, across Buckner from the nest, set up a live bald eagle cam.

After raising their young, or even if they didn't successfully fledge, southern bald eagles take off by early summer and congregate in large numbers in northern states. So enjoy Nick and Nora until then.

"They're protected, whether they're nesting or not,” said Brett Johnson, environmental biologist for Dallas Parks and Recreation Department. “So if that's where they hang out, then that's what has to be protected."

Bald eagles can live 20 years or more and have strong nest fidelity, returning to the same nest year after year. So if obnoxious people don't disturb Nick and Nora, they may be seasonal White Rock Lake residents for a long time.

Visit the eBird bald eagle page and enter a location like Dallas County to see many hundreds of North Texas observations. Most are focused around rivers and reservoirs, with a higher number on the eastern side of DFW due to the bigger trees and riparian corridors.

"Eagles are successful around DFW and throughout the state," said Sam Kieschnick, TPWD urban biologist for DFW. "The TPWD ornithologist mentions over 300 nesting locations in Texas. As expected, lots of these locations aren't publicly known — we want to minimize any disturbance. Nesting sites around most of the major water reservoirs in DFW is a sign of success for this species!" 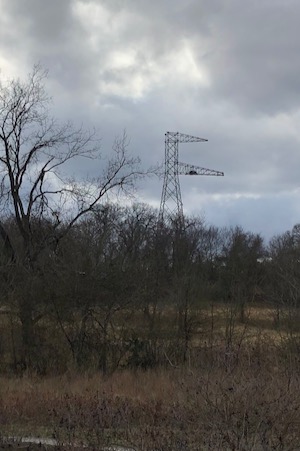 An eagle's nest was relocated from a hot electrical tower to a decoy version off the grid at John Bunker Sands Wetland Center in 2014. Photo by Julie Thibodeaux.

But some nesting sites are well known, such as the bald eagle pair at John Bunker Sands Wetlands Center  near Seagoville. The eagles have been nesting there since 2011, first choosing a large Oncor electrical tower overlooking the wetlands. The center gathered donations and built a faux tower nearby. While the eagles were away in fall 2014, professionals relocated the nest. To everyone's relief, the eagles accepted the new location.

A total of 17 eaglets have been born at the Wetlands. Sadly, last year the eagles had an unsuccessful clutch. They built a second nest in a nearby tree and raised another chick. Returning to the tree nest this year, the pair now has two chicks. The center offers regular eagle-viewing hikes. Bring binoculars. 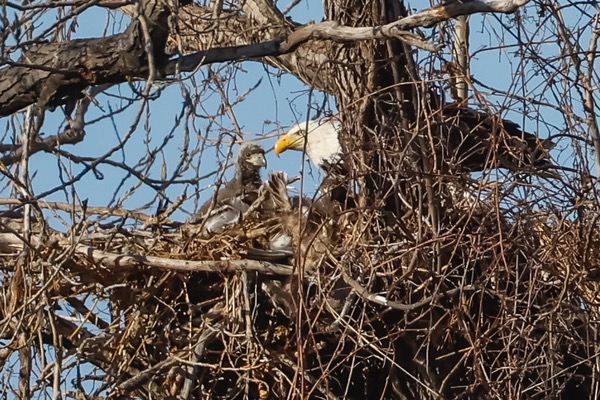 A bald eagle attending to one of its chicks in the nest at Lewisville Lake Environmental Learning Area. Photo by Denver Kramer.

Lewisville Lake Environmental Learning Area at the base of the reservoir dam has enjoyed a nesting pair for a few years on a section of the preserve not open to the public. This year, watchers with scopes spied two eaglets. Look for eagles fishing and hunting along the Elm Fork from the Bittern Marsh and Redbud Trails. Enjoy them soaring over the lake from lakeshore parks.

Another prime eagle watching area is the lower Trinity River in southeast Dallas County around the Dallas Southside Wastewater Treatment Plant. Since the plant is not open to the public, the best viewing opportunities are across the river at Goat Island Preserve. Joe's Riverside Trail provides good viewing, or take the Riverside Connection off its western end for Eagles, Rapids, and Waterfall Trails on Goat Island itself.

No place in North Texas has more bald eagles than Hagerman National Wildlife Refuge on Lake Texoma, with their most famous pair being named Lucy and Ricky.

"The big story at Hagerman is Lucy with her no-care attitude,” said Jack Chiles, who conducts the weekly bird census. “She allows photographers to approach her closely while she sits on one of the power poles off Wildlife Drive. Yet her mate Ricky will not let humans near him."

Chiles said Lucy is a big draw for visitors and has been photographed many thousands of times. “Their nest is in a protected area but would be difficult to reach even if that were not the case. The pair has been nesting at the refuge for 9 years and are currently sharing incubating chores," he said. 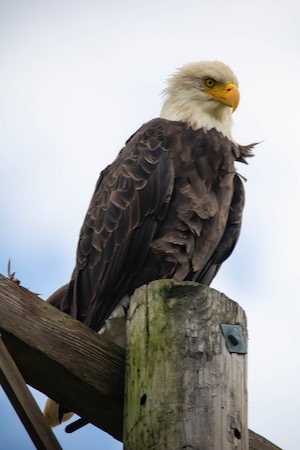 Lucy on her pole at Hagerman National Wildlife Refuge. Photo by Pam Rendall-Bass.

According to Chiles, Lake Texoma has at least five nesting pairs.

"There is a pair that nests west of the refuge that sometimes can be observed from the Sandy Point area. Another pair has been nesting for quite a few years on the Preston Peninsula, and a pair nests near the road to Grandpappy Point. Yet one more pair nests in the area of the Denison Dam. I am sure that there are probably others."

Because most North Texas aquifers are not suitable for municipal water supplies due to their high sodium-absorption ratio, there are numerous reservoirs which create prime bald eagle habitat. Other places with frequent bald eagle visitors include Benbrook Lake, Lake Arlington, Lake Grapevine, and Lake Lavon. Clear Creek Natural Heritage Center on the Elm Fork has frequent fly-bys, as does the Greenbelt  park along the Elm Fork between Lewisville Lake and Ray Roberts Lake State Park.

Read the saga of the nesting pair of eagles at White Rock Lake and the struggle of the first time parents to master the art of nest buiding.