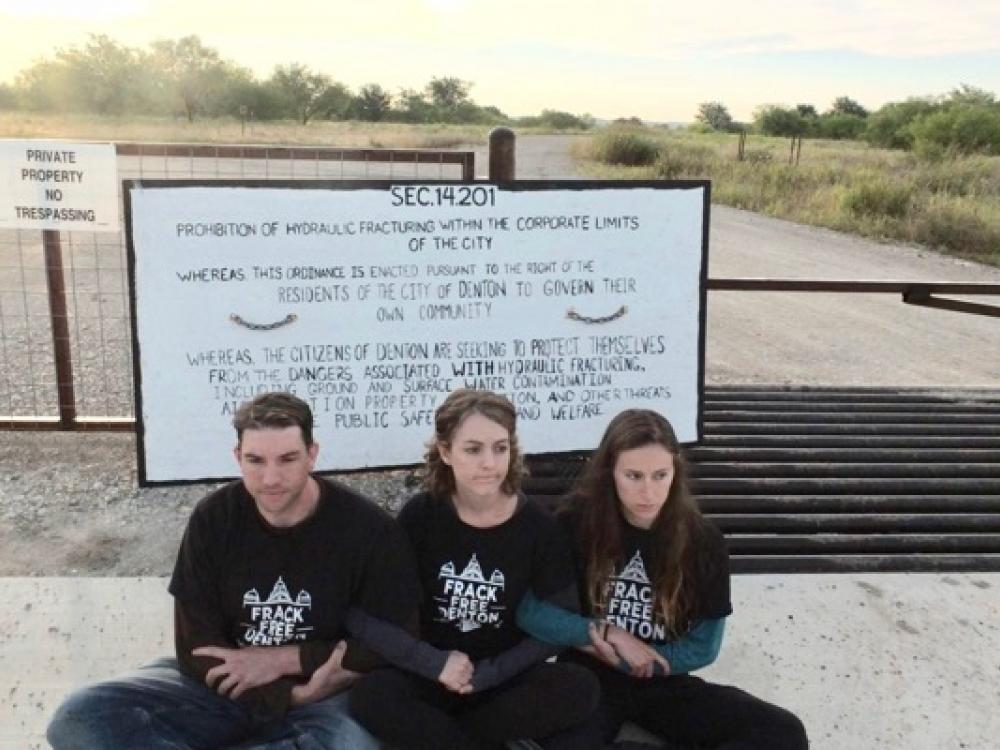 Members of Frack Free Denton Adam Briggle, Niki Chochrek and Tara Hunter were arrested June 1, 2015 for blocking the entrance to the Vantage Energy drill site in Denton. SB 1993 would make this kind of protest a second degree felony. Courtesy of Frack Free Denton.

A new Texas bill would have a "chilling effect" on environmental protests, according to a coalition of North Texas environmental advocates.

The Critical Infrastructure Protection Act, or SB 1993, is still in the Texas Senate Natural Resources and Economic Development Committee but could be voted on as soon as this week.

According to Earthworks, the law is modeled after draft legislation promoted heavily by the American Legislative Exchange Council (ALEC).

The bill establishes that a person who, without the consent of the owner, intentionally or knowingly damages, destroys, vandalizes, defaces or tampers with a critical infrastructure facility or who intentionally or knowingly impedes, inhibits, or interferes with the operation of a critical infrastructure facility, would be charged with a second degree felony. 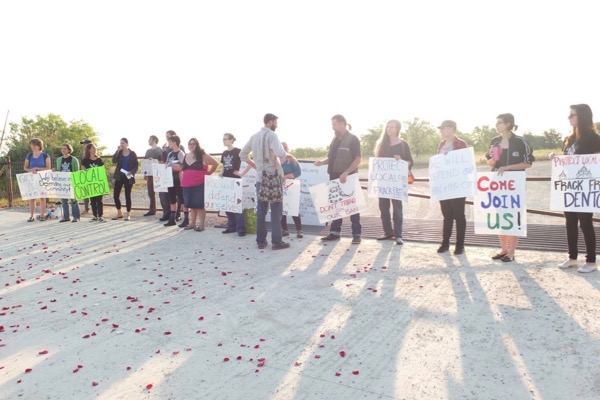 The bill renders acts of civil disobedience now considered to be misdemeanors, as second degree felonies, punishable by up to 20 years in prison.

Beving said that’s equating such acts as blocking an entry to a facility or chaining oneself to a piece of equipment with other second degree felonies such as assault with a deadly weapon, attempted murder, theft of $100,000 to $200,000 and indecency with a child.

“Whether one believes in civil disobedience or not, the fact is, this is overkill,” said Beving. “We already have rules about trespassing and criminal mischief on the books, so this is redundant.” 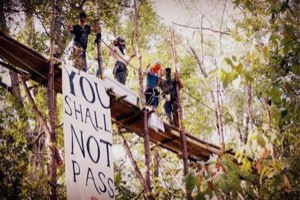 In addition, the bill states that organizations that the individual is associated with could be held liable.

“They can go after your organization or association for $1 million plus exemplary damages - that means they could make an example of you,” said Beving. “This could have unintended consequences for nonprofits by members who may not even be sanctioned by your organization.”

“That means your organization is going to be to blamed for anything anyone does and that’s outrageous.”

Beving is calling on environmental advocates to call members of the State Natural Resources and Economic Development Committee and urge them to protect free speech and vote ‘No’ on SB 1993. She said the bill applies to not only environmental activists but landowners who may simply be protecting their property.

A similar bill HB 3557 has passed out of committee.

“It’s not as egregious,” said Beving.

She expects there to be several versions of the bill floated, with legislators hoping to slip one through.

Yolonda Blue Horse, board member for Dallas Peace and Justice Center, drove to Austin recently to testify against SB 1993.

“It’s infringing on our first amendment rights to protest,” said Blue Horse. “There are already laws in place to protect corporations from protestors."

She said she’s also concerned about the legislature’s definition of critical infrastructure.

“Schools could be considered critical infrastructure. Then teachers couldn’t do their walkouts. It could affect a lot more down the road if this bill passes.”