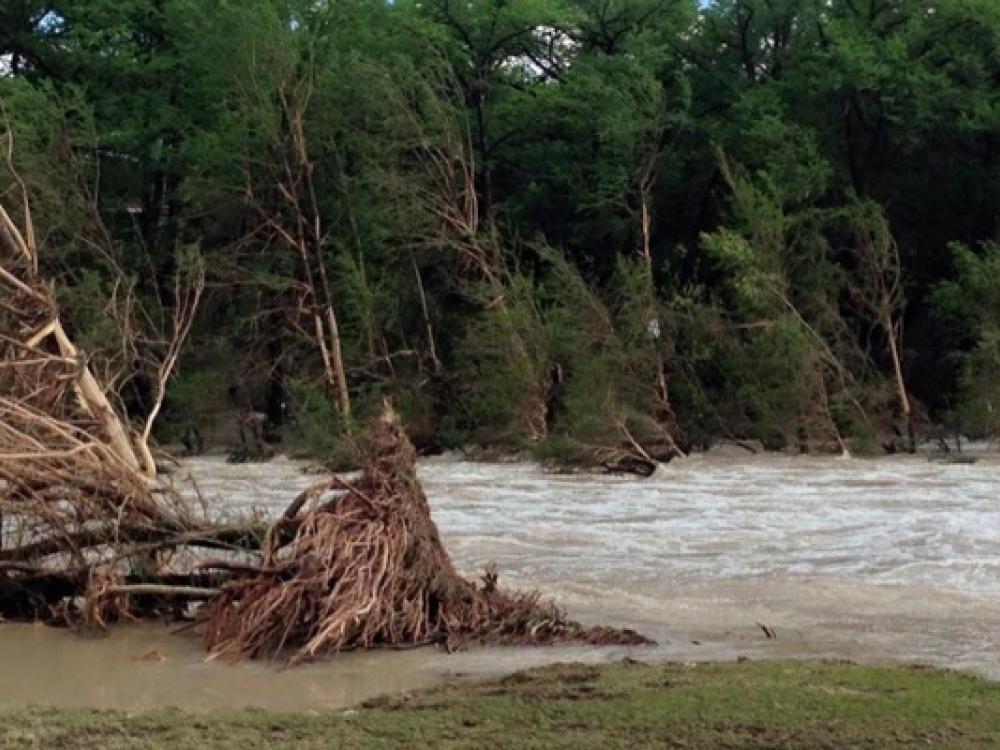 Flooding along the Blanco River in Wimberley in May 2015. Photo by Steve Overby/Texas Tribune.​

Texans should expect warmer weather, more wildfires and urban flooding, and increased impact from hurricanes through 2036 thanks to climate change, according to a new study from the Office of the Texas State Climatologist at Texas A&M University published in March.

The study of historic and future climate trends says the state has already experienced such changes in recent decades and that “the future of Texas depends on its resilience to the natural hazards of the future.”

“It is up to Texans, both individually and collectively, to decide what level of resilience is appropriate, and at what cost, compared to the costs of damage and recovery on both an economic and societal level,” the study authors wrote.

• The number of 100-degree days has more than doubled over the past 40 years and could nearly double again by 2036, to about 21 per year. At the same time, extreme cold will become less frequent and less severe.

• Extreme rainfall has become more frequent and severe and is expected to worsen, increasing an estimated 2-3 percent by 2036. As a result, there will be a significant increase in urban flooding — as much as 15 percent more than occurred between 2000 and 2018.

• While the frequency of hurricanes is expected to stay the same or even decrease, their intensity is expected to increase significantly. And thanks to sea level rise, the risk of hurricane storm surge in places along the Texas Gulf Coast where water is rising the fastest — like Galveston and Rockport — may double by 2050 compared with risk levels around the turn of the 19th century.

• The state has gotten drier despite increased precipitation, and “the majority of factors point toward increased drought severity.” That increased dryness will increase risk of wildfires in areas currently at lower risk, like the eastern part of the state, which currently receives substantially more rainfall.
While it paints a dire picture, the study includes some bright spots. For example, river flooding is not expected to worsen because increased temperatures will lead to drier, more absorbent soil.

“River flooding in Texas is projected to have no substantial change through 2036,” according to the study.

Rising temperatures also could result in a decreased chance of snow and freezing precipitation, including hail, though some of those projections are tentative and have major caveats. The study also says that the southeastern United States, including eastern Texas, is almost the only region on Earth where temperatures remained largely flat during the 20th century. However, it says that “recent temperatures have increased in all seasons and in all regions of Texas.”

The study, which was peer reviewed, was funded by Texas 2036, a Dallas-based nonprofit organization focused on “building long-term, data-driven strategies to secure Texas’ continued prosperity for years to come.”

It acknowledges certain limitations of projecting historical trends into the future, including incomplete or inaccurate historical data. It also says that “natural climate variability and the randomness of extreme weather events can mask or even overwhelm any underlying long-term trends.”

But, the study says, “Despite these limitations, there are sound reasons to expect continued change in a variety of aspects of extreme Texas weather, and knowledge of such likely changes can be very useful in a variety of planning contexts.”

Various cities in Texas have pursued climate action plans, included most recently the cities of Dallas and Houston. Austin passed its plan in 2007. and San Antonio passed its plan last year. Such efforts at the state level have been virtually nonexistent as climate change remains a politically divisive issue. A slew of climate change planning bills filed last year by Democrats did not even receive public hearings — one of the first major steps in the legislative process.

The vast majority of climate scientists agree that humans are causing climate change through increased emissions of carbon dioxide and other planet-warming emissions.

The Texas Tribune is a nonprofit, nonpartisan media organization that informs Texans — and engages with them — about public policy, politics, government and statewide issues. Texas A&M University and Texas 2036 have been financial supporters of The Texas Tribune, a nonprofit, nonpartisan news organization that is funded in part by donations from members, foundations and corporate sponsors.

Dallas and Fort Worth ISDs take steps to address climate

Texas Green Report Podcast: Why climate change is bad for our health

Kiah Collier reports on energy and the environment for the Texas Tribune, where she began working in July 2015. Since graduating from the University of Texas at Austin in 2009 with degrees in philosophy and multimedia journalism, Kiah has reported on government and politics for publications across the state, including the Austin-American Statesman and the Houston Chronicle.