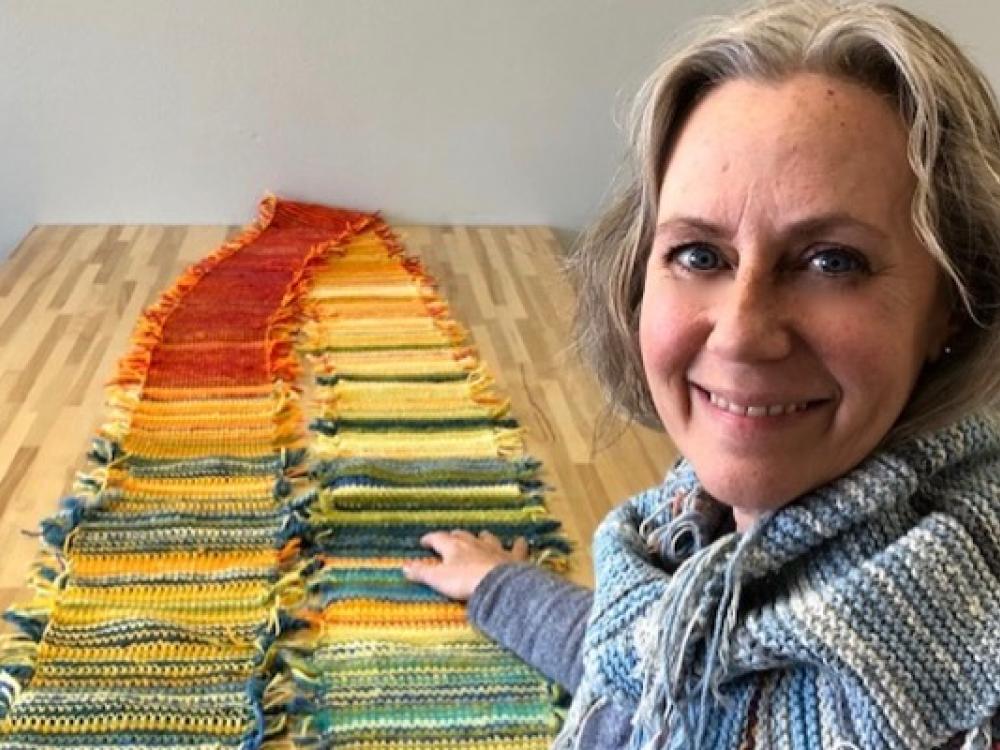 Earlier this month, Jennifer Stuart unveiled her "temperature" scarf, which documents the temperature patterns as they rolled through 2019. Photos by Andrea Ridout. Location courtesy of Peabody Coffee.

We all have that one friend who is just a bit further down their green journey than you are - the slightly hippie, bohemian guy or gal. He or she was the first vegetarian that you knew. They wore hemp or organic cotton clothing back before it was cool. They even compost their tea bags. Being friends with them has encouraged you to follow your own green path.

For me, that friend is Jennifer Stuart. The founder of an eco-friendly preschool, Jennifer has always been a bit on the green leading edge. It was somewhat through her influence that I finally stopped eating meat, bought a hybrid car, and began growing my own herbs. She also taught me to knit, though I am not very good at it.

Jennifer is good at knitting. If knitting were an Olympic sport, she would be a gold medalist. In meetings, at lunches and even while sipping a hot cup of coffee with an old friend, she “knits one and purls two” her way through sweaters, socks and hats for people and sometimes psychedelic wraps for shopping baskets, telephone poles and other landmarks around town. Every public mailbox needs its own cardigan, don’t ya think? 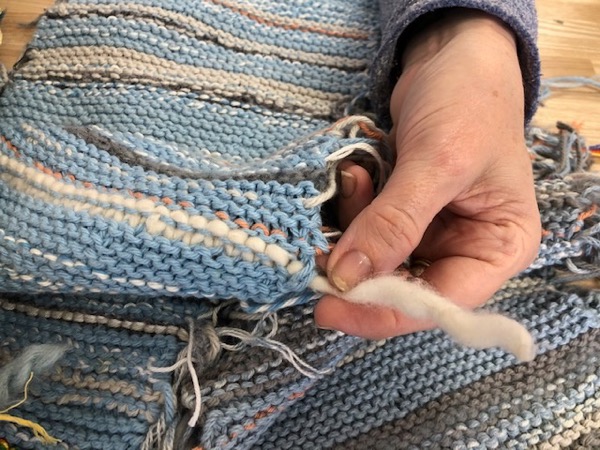 OUT OF THE BLUE

In January of 2018, Jennifer decided to create a "sky scarf," a tribute to the sky in yarn using scraps that she had collected from one project or another. Her sky scarf is a knitted wonder in alternating stripes of azure, navy, cornflower and baby blue with the occasional brilliant orange-red, mimicking the sky over her home in Dallas.  It records all 365 days of 2018 skies, stretching to over 10 feet in length.

Last year, she set out to crochet a "temperature scarf," inspired by The Tempestry Project, a global movement to create scarves, wall hangings and other art forms that visualize climate data in a way that is "accurate, personal, tangible and beautiful," as the initiative notes on its website.

Her temperature scarf records the climate in north Texas, every single day, for all of 2019. This meteorological tapestry is a full 13 feet long - enough to wrap around several adults and a bevy of kids. It’s an all-weather diary in hues of pumpkin and bluebonnet.

Both scarves mean more to Jennifer than just journals in yarn. They are also statements about climate change but in a form that is meant to spur creative thought and conversation. 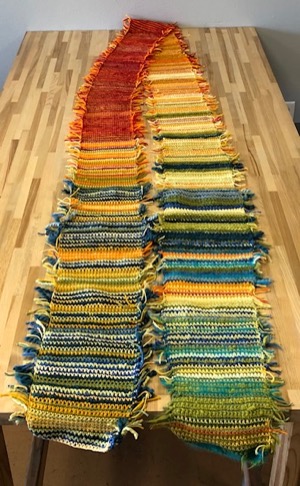 The Tempestry Project has designated certain colors to represent specific temperatures. Using 5-degree increments, the temps range from less than -30 °F to more than 121 °F. By standardizing yarn colors, crafters from all over the world can compare their scarves and tapestries and see immediate correlations.

The Tempestry Project aims to visualize climate data in a way that is "accurate, personal, tangible and beautiful."

To designate January of 2019 with lows in the 30s and highs above 60, Jennifer chose yarns of the deepest blue for the chilly days blending with white and even pale green and yellow as temperatures rose. February was much the same and then March through May began to see more yellows blended with orange. By the summer months, orange and red totally dominated and that extended well into September.

Fall was mercurial, as always, with the high on Oct. 10 of 91 degrees and the low the next day sinking to 43. According to the Dallas Morning News, that 38 degree range was one of the most extreme shifts of the year.

So the scarf has a somewhat manic pattern as the colors zig zag wildly. November brought a drop in temps as blues began to creep in again, with the odd orange stripe here and there. Winter launched with a spurt of warmth and yellow stripes with highs in the 50s through mid-December until an icy grip finally descends with a white and then blue thread at the end of the scarf and the year. 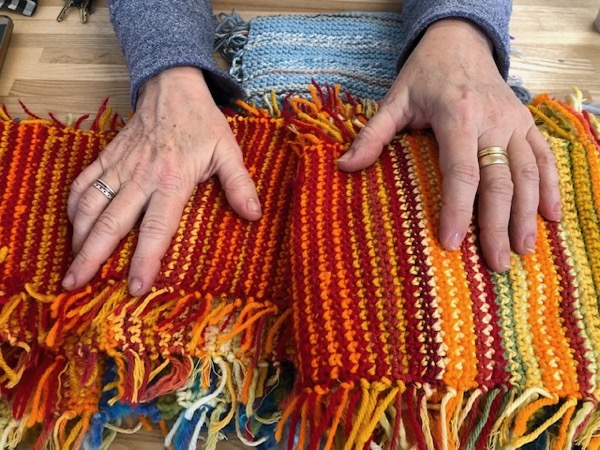 The 13-foot long scarf features six feet of orange and red days, marking a temperature of 71 degrees or higher.

Jennifer has documented both scarves on her Facebook page in a series of posts from January 2018 to January 2020. Her final comments at the end of the second scarf are a fitting epitaph to her fortitude and perseverance.

“Ah yes, the Temperature Scarf at the end of the year. It tested my tolerances of orange acrylic yarn and crochet. It proves my theory that in Texas we have two seasons: Summer and Not-Summer. It is 13 feet long (6 of them orange and red). It will never be worn as a scarf. It represents many trying experiences this year, and its completion allows space for new and more welcomed projects (in knitting and in the rest of life). Thinking of exploring the colors of the sunsets in 2020.”

Stay up to date on everything green in North Texas, including the latest news and events! Sign up for the weekly Green Source DFW Newsletter! Follow us on Facebook and Twitter. Also check out our new podcast The Texas Green Report, available on your favorite podcast app