State park could close if Trump builds border wall through it 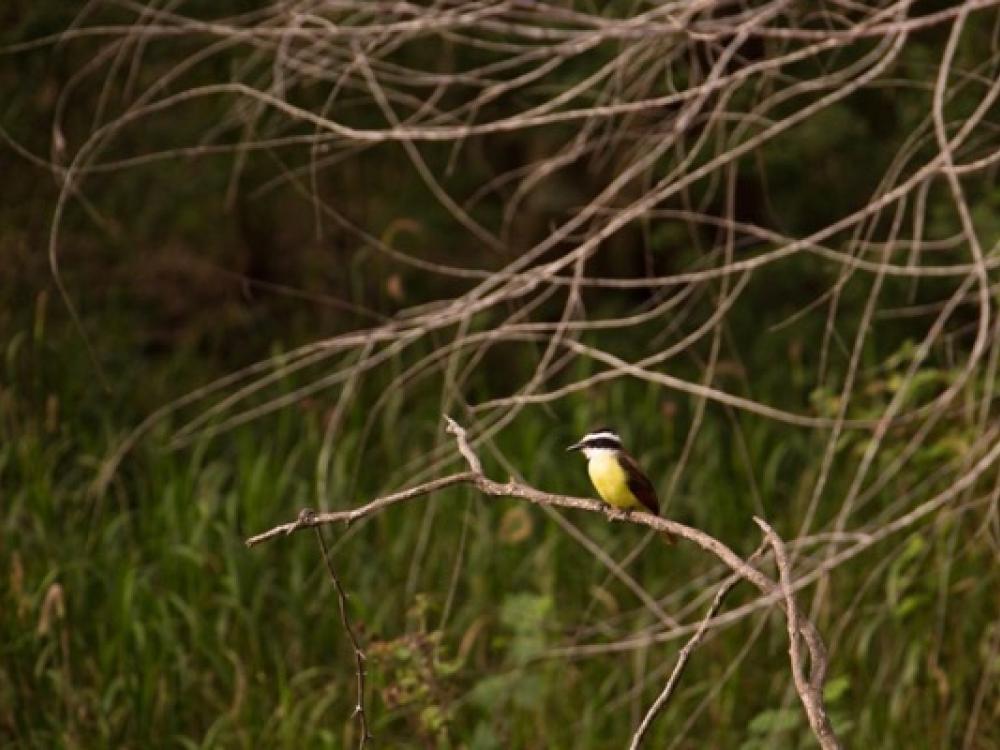 Birding tourism, a huge industry in the Rio Grande Valley, could be affected by negative environmental impacts of the border wall. Above, a Kisskadee perches at Resaca de la Palma, a World Birding Center Texas state park. Photo by Callie Richmond/The Texas Tribune.

The Texas Parks and Wildlife Department has warned U.S. Border Patrol that it could be forced to shutter a beloved state park on the southern tip of the state if President Donald Trump builds his border wall through it as proposed. The state parks department also is urging the agency to consider less impactful alternatives to a wall within the park.

An October 2017 memo attached to a letter Texas Parks and Wildlife Department Executive Director Carter Smith sent on Friday to Paul Enriquez, the Border Patrol's real estate and environmental branch chief, says that if the federal government builds a proposed hybrid levee-wall through Bentsen-Rio Grande Valley State Park, it “would certainly call into question whether TPWD could continue to safely operate the property as a state park, and thereby possibly causing the site to revert back to the original Grantors’ heirs.”

The grantors, the family of the late Democratic U.S. Sen. Lloyd Bentsen, sold 586.9 acres along the Rio Grande to the state in 1944 for a single dollar on condition that land be used “solely for public park purposes.”

The park - part of the World Birding Center - hosts several threatened species and is one of the nation’s top bird-watching destinations, drawing nearly 30,000 visitors in 2016.

The memo says it's unclear what the full impact to the park would be, but "it is safe to say a wall would be a significant deterrent to visitors and inhibit the access currently provided." At a minimum, the memo says, a wall through the park would “likely discontinue overnight camping and nighttime wildlife viewing” at the park, which is located near Mission.

The park - part of the World Birding Center - hosts several threatened species and is one of the nation’s top bird-watching destinations, drawing nearly 30,000 visitors in 2016. As with other state parks, visitorship has been growing by about 5 percent annually, the memo notes.

Since then, U.S. Customs and Border Protection has notified landowners of plans to build 33 miles of barrier in Hidalgo County and Starr County. The 25 miles it plans to build in Hidalgo will consist of 18-foot-tall fencing atop vertical concrete river levees - similar to an existing levee-wall structure the federal government built a decade ago. Plans also call for a 150-foot-wide "enforcement zone" on the river-facing side of the barrier with a road for law enforcement and private property owners, 24-7 lighting, cameras and sensors.

Even as Customs and Border Protection seeks input from stakeholders on plan specifics, it already is notifying landowners whose land it plans to seize to build the barrier, The Texas Tribune reported last month.

Customs and Border Protection didn’t respond to a request for comment.

Smith, the state parks chief, emphasized in an interview that it’s far too early to tell if the state would be forced to shutter the park if the wall is built as proposed and downplayed the odds. Still, he said the structure would “bifurcate the park, meaning the headquarters and visitors center would be north of the border wall and the entire remainder of the park that the public uses would be on the south side of the wall.”

“Obviously, that would present some serious operational, management and safety issues,” he said.

Smith said they have presented Border Patrol with a variety of alternatives, the most ideal being an investment in technology and manpower rather than a physical structure. Re-routing the levee-wall would not be the best option, Smith said, because it would mean either placing the entire park behind the wall or building it directly in the Rio Grande floodplain.

Smith said they have presented Border Patrol with a variety of alternatives, the most ideal being an investment in technology and manpower rather than a physical structure.

“We understand and respect the criticality of that border security mission, but we also believe there’s a way to accomplish that while maintaining the vitality of Bentsen State Park,” Smith said.

Smith said Friday’s letter was sent in response to a “generic” request from Border Patrol last month to weigh in on the construction plans within 30 days - something it has done with other stakeholders as it prepares to move forward with construction. The letter was brief, saying the state parks department hadn’t changed its position on the border wall since the last time it wrote in June.

The potential construction of a border wall through sensitive natural areas like Bentsen have sparked an uproar in the Rio Grande Valley and beyond. Scientists have warned that the border wall would devastate wildlife habitat. Backlash prompted Congress to spare one area, the Santa Ana National Wildlife Refuge, from construction as it moved to fund the wall.

Scientists have warned that the border wall would devastate wildlife habitat. Backlash prompted Congress to spare one area, the Santa Ana National Wildlife Refuge, from construction as it moved to fund the wall.

Executive Director Marianna Trevino-Wright said the center’s leadership has vowed to keep the center open no matter what. But she said closure of the state park could significantly impact visitorship at the center.

“If the park board does decide to close Bentsen because the border wall is built, and all of that visitorship dries up, who knows what the long term effect would be to the viability of the National Butterfly Center?” she said, joking that “It could turn out to be great. Maybe all the birds and butterflies will just migrate on over to the butterfly center."

“Of course we know with the natural world, all of that is dictated by competition for natural resources so it’s unlikely we could accommodate that kind of population density,” she said.

Kiah Collier reports on energy and the environment for the Texas Tribune, where she began working in July 2015. Since graduating from the University of Texas at Austin in 2009 with degrees in philosophy and multimedia journalism, Kiah has reported on government and politics for publications across the state, including the Austin-American Statesman and the Houston Chronicle.