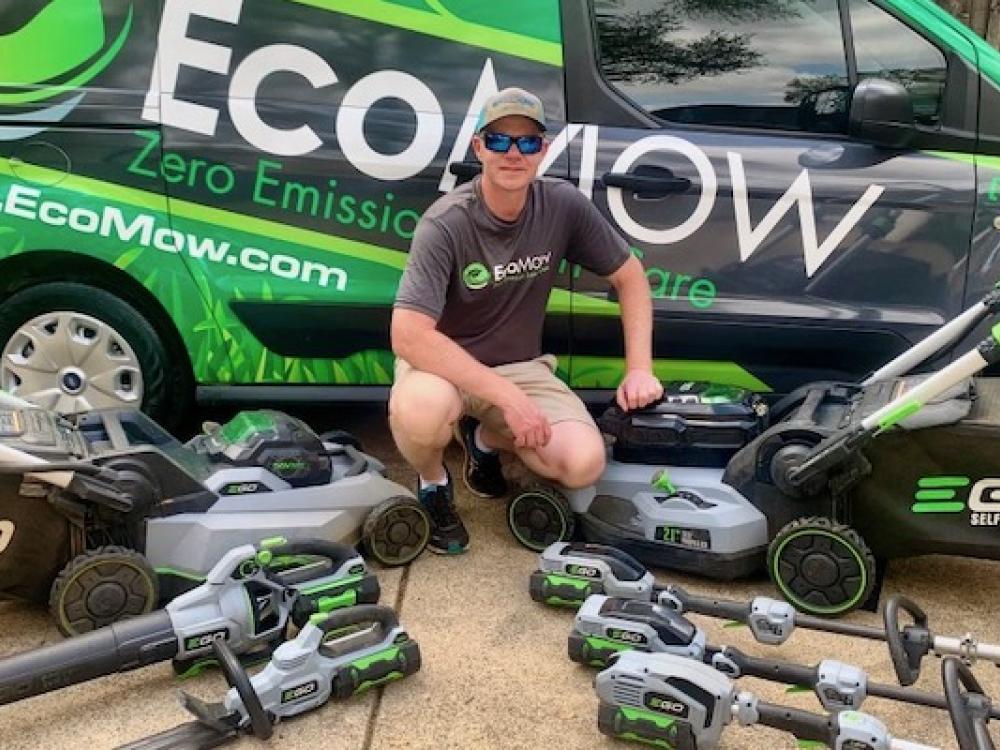 EcoMow's lawn equipment is 100 percent battery-electric. Dallas-based founder Stephen Gault (shown) says an electric van is on order to replace the gas-powered one in the photo. Photo courtesy of Stephen Gault. ​

Stephen Gault calls it “a complete leap of faith.”

At age 45, with three kids in private school and a mere hunch that he might be on to something, he decided to start a Dallas-area lawncare service that shunned noisy, smelly gasoline-powered tools in favor of more-hushed and odorless battery-electric gear.

When he quit his job, the long-time Preston Hollow resident knew in his heart he was doing the right thing. He just wasn’t sure exactly what he was getting into. And getting into it wasn’t exactly easy.

Spoiler alert: Gault’s hunch was spot-on. Four years later, his business, EcoMow, has a fast-growing base of more than 230 clients who pay about the same for his service as they would for a conventional crew.

With 10 electric mowers, including a pair of big, zero-turning-radius riding mowers, the company is now beginning to take on lawn maintenance for commercial sites. Gault also is laying plans to move into the suburban Houston market in 2023. The business’s overarching rule? “We never use gas,” he said. 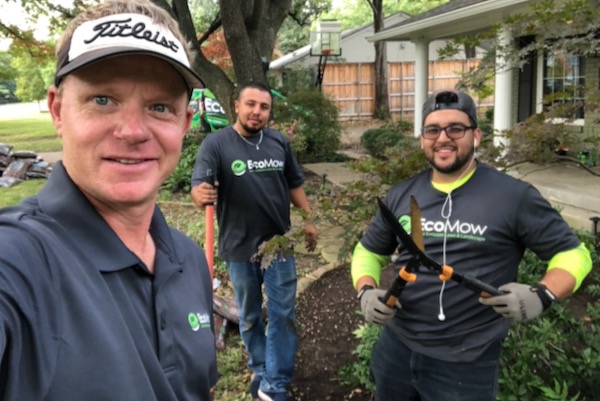 EcoMow’s emissions-free profile holds great appeal for the sizeable segment of Gault’s customers who identify as environmentally conscious. For most, however, it’s all about the racket.

“Noise pollution seems to be driving our business,” he said.

Battery-electric lawn equipment tends to be half to one-fourth as loud as gas-powered gear. In fact, noise was the irritant that motivated Gault to conjure his alternative business in the first place.

“My wife and I were out walking the dog and all we hear when we’re out there is these gas-powered leaf blowers blasting,” he said.

As they strolled out of range of one leaf blower, they entered the earsplitting radius of another one. There was no escaping the din. He turned to his wife Melissa and said, loudly, “You know, maybe there’s a market for an all-battery-powered lawn service.”

Melissa wasn’t so sure. But she was in. They raided their savings account.

The business began as a sleepy side gig with the most modest assortment of battery-equipped yard tools — a mower, a blower and a trimmer.

“I walked into this deal without one single client,” Gault said.

He advertised his services on LawnStarter, which matches homeowners with lawncare operations. At first, nothing happened. But after a month or so, the customers began to materialize, and Gault started to ponder the what-ifs of going full-time with the enterprise.

A self-described “marketing guy,” Gault was confident he could promote the business successfully. It wasn’t long before he was pulling the plug on his lucrative — and demanding — career as a physician recruiter, a job that had fed his family and ruled his professional and personal life for 20 years. Travel demands and time away from home were taking a toll.

“It finally got to be too much. I walked in on a Friday and told everybody at work, ‘I’m not going to be back on Monday,’” he said.

A period of freefall and uncertainty followed Gault’s jump into the unknown, including early struggles with equipment that was better suited to home use than professional.

He was learning on the job. To keep mowing for a whole day he had to buy ever-larger portable battery chargers and better van-top solar panels and inverters to keep those chargers topped off. It got expensive, but he kept his prices in line with the market.

In the end, it was a soft landing. What Gault’s tenacity has revealed is a huge, untapped market of homeowners eager to escape the grating annoyance of loud gas yard equipment. He describes his quiet operation as “kind of like stealth, ninja lawncare.”

And he says younger, eco-conscious homeowners have been especially interested in signing up.

Neighbors aren’t the only ones who benefit from the battery-electric revolution, Gault said.

“It’s easier on our workers — just a better quality of life for our guys because it’s quieter and leaves a minimal carbon footprint.” 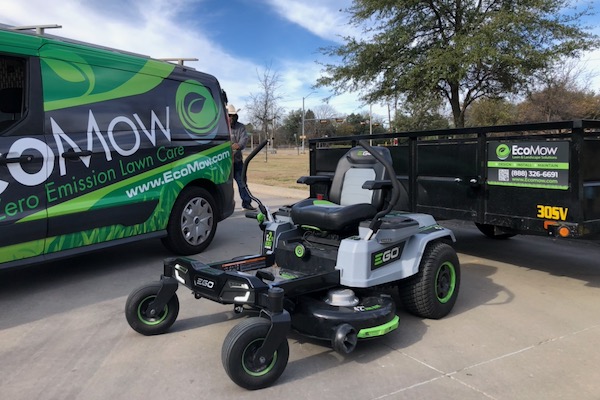 This battery-powered riding mower is one of two that EcoMow has added to its fleet of all-electric equipment. Photo courtesy of Stephen Gault.

Demand for the service is so high, and the equipment consequently subject to such constant mechanical stress, that the manufacturer EGO asked EcoMow to serve as a kind of field lab for its battery-electric lawn tools. EGO uses Gault’s steady stream of feedback to improve existing products and introduce new ones with greater reliability, durability and power. The EcoMow team now attends EGO’s quarterly development meetings. Renogy, a business specializing in solar power, now sponsors EcoMow’s solar charging equipment.

Gault’s marketing prowess shows in EcoMow’s exhaustive website, as well as its activity on Facebook, Instagram, NextDoor and in a new podcast called Electric Lawn Talk. The company’s online customer interface allows for easy scheduling and communication, and all payments are handled online.

To date, only a small handful of lawn business in North Texas have gone battery electric. Most still rely on tried-and-true, heavy-duty gas-powered equipment. And Gault admits that while the electric gear is equal to gas for most jobs, the commercial gas mowers still do better on extremely lush, thick or matted turf like zoysia, an exotic grass. But he says electric tools for the most part have evolved to the same performance levels as gas equipment, and they continue to improve dramatically year-over-year.

At trade shows it’s clear that manufacturers are now prioritizing electric over gas, Gault said. “John Deere just announced a new electric mower. All these big companies are beginning to make electric equipment. They’re throwing in the towel on the other stuff,” he said.

“We give it another five years, and I think we’ll see quite a few more companies like ours. It’s all about educating people that this is a viable solution we’ve built. People are becoming more conscious about climate change. The younger generation is focused on the environment. They want to do the best they can to preserve it for their own kids.”

Shopping for an electric mower? Here's our guide

Leave the leaves! They're good for your yard and wildlife