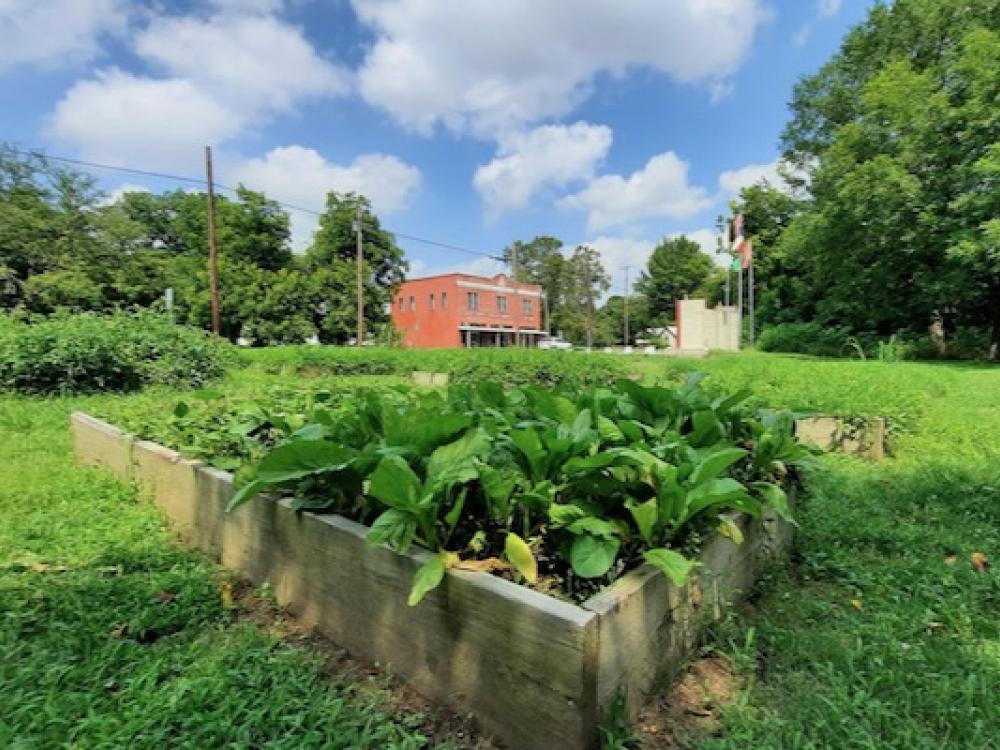 The Texas Poor People's Campaign recently revived a community garden across from the Ellis County African American Hall of Fame in Waxahachie. Photo by Marshall Hinsley.

The Texas Poor People’s Campaign is putting down roots -  literally - in a fast-growing North Texas town with a turbulent past.

This summer, members of the Dallas chapter of the DC-based nonprofit pitched in at a community garden across the street from the Ellis County African American Hall of Fame on Martin Luther King Jr. Boulevard in Waxahachie.

The work on the city-owned plots is part of the organization's focus to empower the disenfranchised and comfort the struggling, especially in the midst of a global pandemic and record-high unemployment. 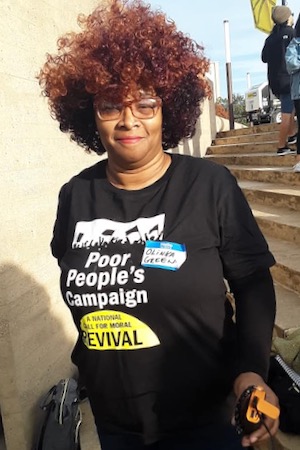 Olinka Green is an organizer for the Texas Poor People's Campaign. Courtesy of Olinka Green.

Soon in the 250 square feet of raised garden beds on the town’s east side, noted for its historically African-American demographics, tomatoes, peppers, squash and okra along with a variety of fresh herbs and delicate flowers will yield a locally-grown bounty.

“It shows that if people are good stewards of the earth today, God will bring forth majesty, and it takes people coming together to create something beautiful,” says Olinka Green, a Dallas-based organizer for the Texas Poor People’s Campaign.

Green says the garden represents a part of the organization’s mission to offset ecological devastation that predominantly affects people living in poverty. Although she says she’s unaware of any specific ecological threats in the small community 30 minutes south of Dallas, the garden is more of a representation of the delicate beauty of nature that needs to be preserved and appreciated before it’s lost.

“We have four superfund sites within walking distance of where I live,” says Green, contrasting her South Dallas community with what she describes as a beautiful, pristine atmosphere where the garden is located in Waxahachie’s Freedman’s Plaza. “I think it’s a beautiful thing to have. It’s like in the Color Purple - they say God gets mad when we just walk by the color purple. We don’t really realize what we have until it’s gone.” 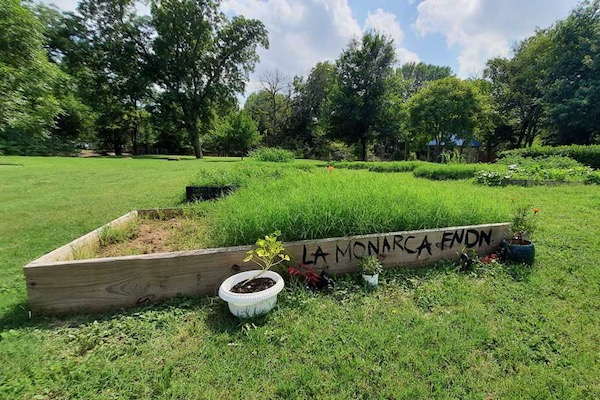 Dallas resident Denise Benavides is a Texas Poor People’s Campaign organizer and founder of La Monarca Foundation, a small group that helps immigrant families who’ve been targeted by the U.S. Immigrations and Customs Enforcement agency. She has committed three days each week to taking care of several beds in the garden by checking in on them and watering the plants in the mornings and evenings until a local volunteer steps forward. 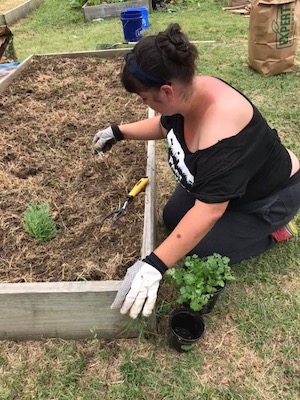 Denise Benavides tends the community garden three days a week until more volunteers can be enlisted. Courtesy of the Texas Poor People's Campaign.

Benavides says the garden project started as she and Green met with Dr. Jamal Rasheed, founder of the Ellis County African American Hall of Fame in Waxahachie. They discussed the garden that the Waxahachie Rotary Club built several years ago but that had recently fallen into disuse. Together they came up with a plan to spruce it up. They tied it in with a three-day campaign event in June through which more than 500 families received food staples that they handed out from the North Texas Food Bank.

“So when we had the Poor People’s Campaign event, part of that event was to teach the community about how to grow your own food,” Benavides says. “La Monarca adopted three boxes. One of them we got to finish that day from start to finish, and it's dedicated to the children that have died in the hands of I.C.E and Customs and Border Patrol.

In it, they planted thyme, lavender, cilantro, rosemary and different Mexican flowers. 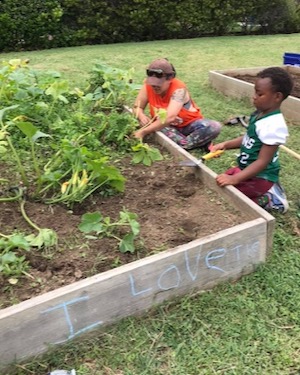 “We also have a compost box, and so we're trying to teach people how to live a more sustainable, environmentally heathy lifestyle.”

Organizers say the need for distributing food aid and economic assistance in Ellis County is as urgent as it is in Dallas and Tarrant counties. In all three counties, the unemployment rate has climbed to more than 10 percent, reversing the trend of steadily improving economic statistics that began in 2009 and lasted until the arrival of a global pandemic on the world scene in late 2019.

Green says the Texas Poor People’s Campaign is the continuation of Dr. Martin Luther King, Jr.’s Poor People's March to Washington in 1968. Intended to raise awareness among the nation's lawmakers of the needs of the disenfranchised and impoverished, the march was cut short by King’s assassination and the campaign fell apart until it was recently revived to finish the progress that began in the Civil Rights era in creating a more equal and just society.

Like many Texas towns, Waxahachie has a complicated racial history. On the one hand, the city’s legacy can be seen in the pages of the local newspaper. KKK meeting announcements were displayed throughout the early 1900s and an article appearing in the Waxahachie Daily Light on Sept. 8, 1905 records describing the gruesome burning-to-death of an African-American man by a mob of 3,000 county residents who cheered on the public execution. Three days later, a community south of town voted to remove African-Americans from the vicinity. The vote, as the paper stated 115 years ago, was made “presumably by white people who are determined to rid their community of the black race.”

On the other hand, Waxahachie served as a haven for the impoverished sharecroppers who descended from enslaved men and women in the late 1800s. And after the 1905 vote to ban African Americans from farms south of town, those who were displaced and sent on their way with no possessions congregated on the city’s East Side where they started their lives over. This partly explains the lingering demographic division between the so-called Black side of town with the rest of the community. 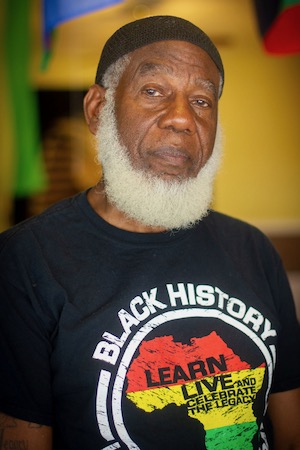 Jamal has been working through the museum he founded to chronicle the plight of African Americans in Ellis County before the memories of those who witnessed the era prior to the civil rights movement fades.

For Benavides and Green, the work on the garden is also symbolic of the renewal and hope they intend to bring to those who are struggling to make ends meet in the community. Already, the Waxahachie Mayor David Hill has proclaimed June 20 as Poor People’s Campaign Day, and Green says she’s been grateful for the show of support by the community, especially among the police department and city officials.

“[Waxahachie] is a beautiful place, it’s in the country right outside the city, and has such a great history, and they just had such a welcoming arm for us to come,” Green says.

John Smith, director of Waxahachie Parks and Recreation, agrees with Green’s assessment of the community and says he’s pleased to see the attention being given to the small community garden.

“Waxahachie Parks and Recreation gladly provides space for community gardens in a few of our outdoor areas,” Smith says. “Farming is an important part of our rural heritage and for many, it’s not possible in their own space. Hopefully, as the interest grows, we can work with more interested individuals and groups and expand our efforts.”