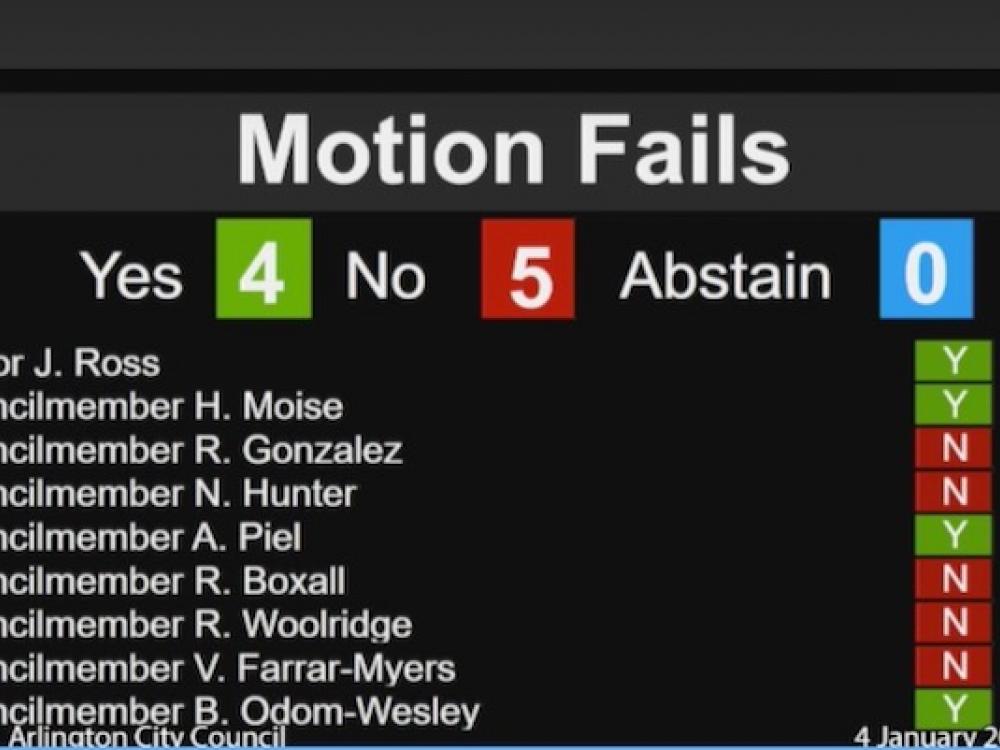 On Tuesday night, the Arlington City Council denied Total's request to expand gas drilling at a site near a daycare center.

On Tuesday night, a grassroots anti-fracking group claimed another victory in its fight to pushback a France-based energy giant’s efforts to expand gas drilling in Arlington.

Liveable Arlington celebrated after Total Energies’ request to drill three more wells next to a preschool in East Arlington was denied in an Arlington City Council special session on Jan. 4.

This was the second time in two years that Total had tried to expand drilling at the site at 2000 S. Watson and failed.

The Arlington environmental group previously led a campaign to stop Total from ramping up gas production at the site, known as AC360, back in June 2020.

Ranjana Bhandari, leader of Liveable Arlington, said it’s no coincidence that Total has pushed more drilling at the site, located near the intersection of Highways 360 and 303.

The drill pad is located in a largely minority community comprised of 40 percent Black and 20 percent Latinx residents, according to a lawsuit filed by Liveable Arlington and Wanda Vincent, owner of The Mother’s Heart Learning Center, the preschool whose playground is located next door. All of the 64 students enrolled at Mother’s Heart are children of Color.

Wilkerson said in a statement after Tuesday’s vote:

“We filed this lawsuit primarily to prevent the City of Arlington from illegally granting permits for additional fracking wells on the property behind the Mother's Heart Daycare without following the proper procedure set out by the City's ordinances. That immediate issue was resolved when the City Council voted not to allow the drilling zone on their second vote on Jan. 4.  We believe that our lawsuit was a strong motivating factor in the second vote, and we are proud of that victory. Because that issue is resolved at this time, we will be dismissing the lawsuit, but we will continue to monitor the City's activities related to fracking permits and will be ready to hold them accountable if they violate their ordinances again.”

Liveable Arlington and Mother’s Heart’s case was built on objections to Total’s drill zone map, which excluded a preexisting well on the drill site.

The city's current ordinance defines a drill zone as “The area approved by the City Council that encloses all the wells on the drill site.”

The city’s ordinance prohibits drilling within 600 feet of a protected use, known as the “setback distance,” unless a waiver is granted by a supermajority of seven council members.

The new drill zone for AC360, approved by the City Council on Nov. 30, omitted a well located as near as 507 feet from a residential home.

The lawsuit argued that the new map was invalid because it purposely left out the existing well that didn’t meet the 600-foot setback requirement. According to the lawsuit, the omission appeared to be made in order to skirt the requirement for a supermajority approval by the Council.

The Fort Worth Report published emails obtained by Liveable Arlington via an open records request that documented discussions between city staff and Total about redrawing the problematic well off the map.

Bhandari said omitting the well was a clear violation of the city’s ordinance.

“This is one of the biggest corporations in the world and we have the city bending the rules for them," said Bhandari. “Laws don’t apply just to some people and not others. That is so antithetical to the society we say we are.”

On Jan. 4, before the final vote, 11 speakers spoke out against allowing more drilling at the sight, including Vincent and a daycare staff member who had experienced sickness near the drill site. Also speaking in opposition were activists Bhandari and Jennifer Quick of Liveable Arlington; Sharon Wilson of Earthworks; Lon Burnam, leader of Tarrant Coalition for Environmental Awareness; John MacFarlance, chair of the Greater Fort Worth Sierra Club; and Luis Castillo, president of Arlington LULAC.

Although the ordinance rules were at issue, speakers voiced concern over the recklessness and inequity of expanding drilling near young children and a mostly minority community.

Meanwhile, the threat of HB 40, the 2015 state legislation that reversed Denton’s fracking ban, also loomed over the proceedings, as some city officials continued to express fear of litigation by oil and gas companies, according to Bhandari.

"The city has the power to establish reasonable setbacks," she pointed out. "If Total was going to sue them, they would have done it by now."

After Tuesday's vote, in an email blast to supporters on Thursday, Bhandari said:

“We stood up to drilling companies and the politicians who support them. Our victory sends a powerful message to them that Arlington residents will fight to protect our health and community.”