Critter-related phobias can keep us from enjoying nature 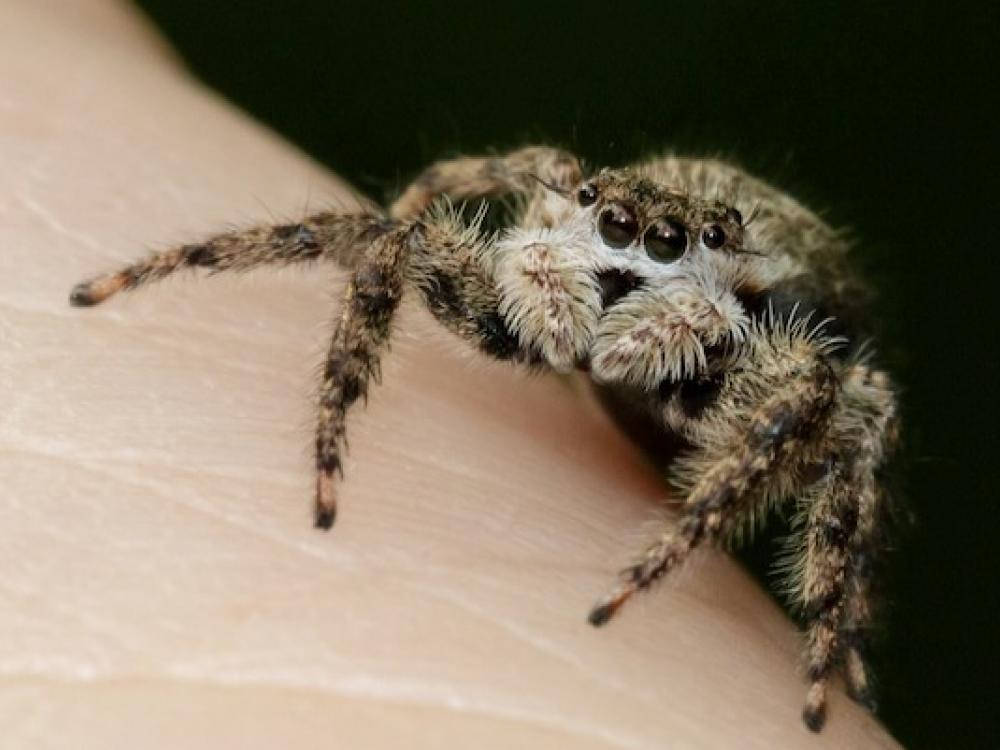 A friendly encounter with a tan jumping spider. Photo courtesy of Meghan Cassidy.

When I was eight years old, I had a surprise encounter that left me with a fear of spiders. It was serious enough to be considered a phobia, but my experiences in later years chipped away at the fear.

I’ll be talking about such fears and how to deal with them at an upcoming presentation at the Friends of Sheri Capehart Nature Preserve in Arlington on March 15.

According to the National Institute of Mental Health, an estimated 12.5 percent of adults in the U.S. will have a phobia at some point in their lives.

Some of them will involve fear of something in nature. Having effective ways to reduce those fears can make it easier for everyone to enjoy nature’s gifts.

Fear can be a gift. It can keep us from climbing into the lion enclosure at the zoo, eating an unidentified mushroom in the woods, or any number of risky activities. However, when a fear is out of proportion or no longer relevant in the modern world, it can cause trouble.

Avoiding a walk in a park because we might encounter a spider is an example. Any spiders we might see will mind their own business if we leave them alone. Even if we bumped into a web, the spider almost certainly would not hurt us. As risks go, spider encounters pose little or no danger. 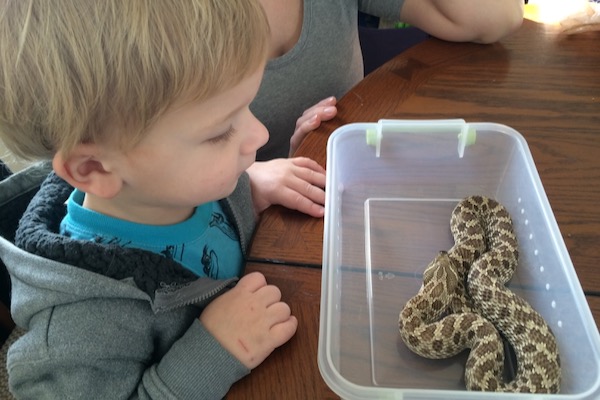 Elijah meets a western hog-nosed snake. When young children have safe and reassuring experiences with animals, they are unlikely to be afraid. Photo by Michael Smith.

WHERE DOES THE FEAR COME FROM?

If you are afraid of an animal, according to the Mayo Clinic, chances are that it comes from one or more of the following:

• A harmful or frightening experience. My spider phobia was triggered when I reached into a hole in the ground and felt something soft. My eight-year-old mind imagined it could be a baby bird, but gently bringing it out of the burrow, I was horrified to see that it was a tarantula.

• Seeing or hearing others’ fear. I might have become afraid of spiders if I had watched another child who was surprised by a tarantula and reacted with horror and fear. Even being exposed to other people talking about how much they fear something can contribute to our own fear.

• Temperament and built-in sensitivity. The child who is generally bold and fearless may be less likely to develop a phobia than a child who is overcautious and apt to be easily startled. That second group of us may be wired in a way that is more vulnerable to anxiety.

There is also some evidence that we may inherit a tendency to fear, or at least to quickly notice, spiders and snakes.

WHAT DO WE FEAR?

A person could develop a specific fear of just about any animal, but the most commonly feared ones include spiders, snakes, dogs, and bees or wasps. According to a study published in the Journal of Psychology, the most-feared animals seem to be those we perceive (rightly or not) as disgusting and/or dangerous. 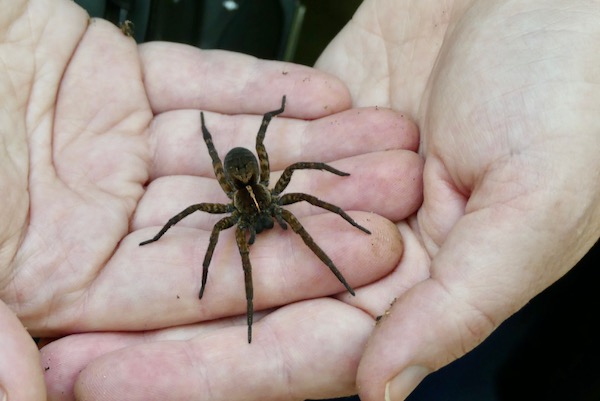 A wolf spider agrees to help with a little exposure therapy. Photo by Michael Smith.

WHAT CAN WE DO ABOUT IT?

Phobias are among the most treatable anxiety conditions, which is not to say that a phobia is no big deal.

It is by definition an intensely uncomfortable condition in which panic and fear take over at least some part of a person’s life, preventing them from doing things they would otherwise do. What can we do to make it better? Two approaches at the top of the list are exposure therapy and cognitive behavioral therapy.

GETTING TO KNOW SPIDERS

What happened to help me with my fear? In my case, I developed a growing interest in field biology that took me outside – where the spiders are.

As a young teen out in the field with museum people and friends, I would not let spiders spoil the fun. I didn’t really have to handle them, I just had to tolerate seeing one nearby. And since my companions generally were not afraid of them, I sometimes saw someone interact with spiders without fear.

As it turns out, all of that was a powerful, if gradual, way to decrease my fear.

That experience was a sort of unintended exposure therapy. Such therapy involves the following:

• Not withdrawing or avoiding the feared item (because avoiding strengthens fear)

Avoiding what we fear does not work, because avoiding only gives temporary relief. Next time we encounter the feared thing, we are even more likely to find it intolerable and to avoid it. However, if we stay with it in a safe situation, next time it will be easier and the fear starts to fall away. 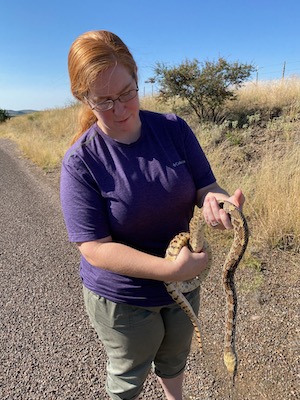 Meghan examines a non-venomous gopher snake in West Texas. The snake was released after being photographed. Photo by Michael Smith.

HOW TO HELP THE FEARFUL

Among the ways that parents and friends can be helpful are:

• Never belittle the person for their fear, even if the fear seems “silly”

• Never pull pranks like throwing a spider onto the person

We can help people learn the real story about the feared object, for example that snakes do not chase us.

And we can teach them how to think about – and talk to themselves about – the fear. Such techniques are part of cognitive behavior therapy, and they might include replacing fearful thinking with statements like, “I know this snake will not attack me, it’s just my brain overreacting.”

These things involve stepping outside the fear and realistically reminding yourself that the fear in this case is just a trick of the brain. It’s our brain giving a sort of false alarm about danger that does not exist. Instead of thinking, “I can’t stand this” or “I’m gonna go crazy,” you remind yourself that by keeping on going, step by step, you will get better.

How to Help with Fear of Animals and Nature

About: Arlington-based writer, naturalist and herp expert Michael Smith will talk about how such fears work and what we can do to make it better. He is author of The Wild Lives of Reptiles and Amphibians, and Herping Texas: The Quest for Reptiles and Amphibians, coauthored with Clint King. (Both from Texas A&M University Press.) He recently retired after a 35-year career as a Psychological Associate.

Michael Smith is an Arlington-based writer and naturalist. He is author of "The Wild Lives of Reptiles and Amphibians," and "Herping Texas: The Quest for Reptiles and Amphibians," coauthored with Clint King. (Both from Texas A&M University Press.) He semi-retired after a 35-year career as a Psychological Associate. He offers mindfulness in nature groups as part of his part-time practice: See msmithlpa.com. Contact him at masmith.tx@gmail.com.