Want to go solar? Local experts say 'go for it' 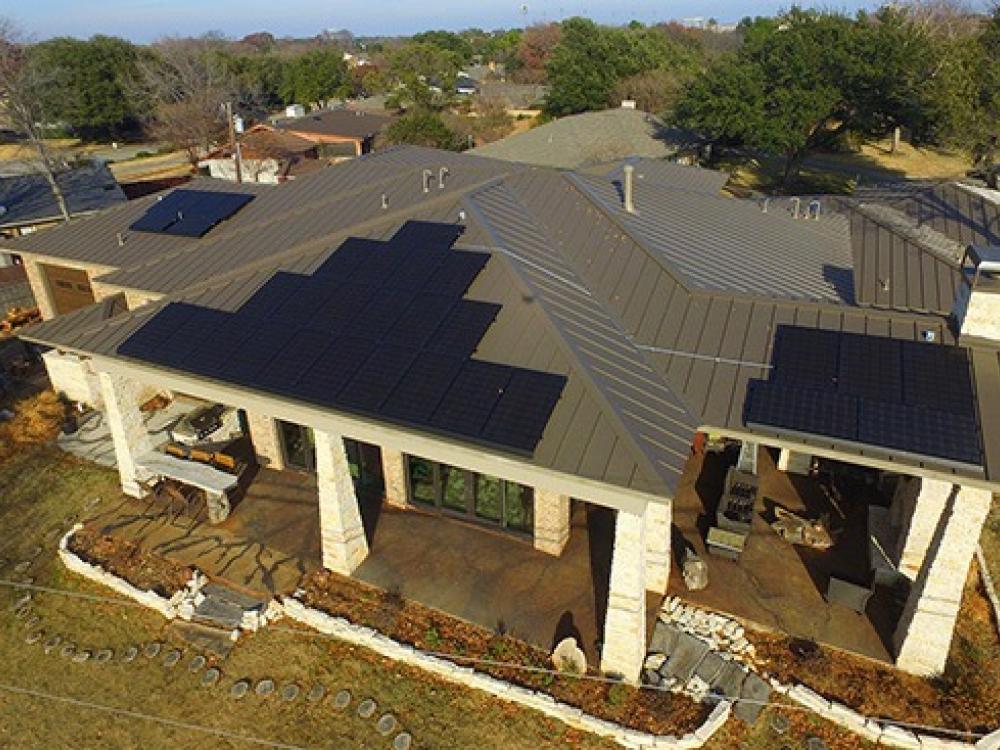 Two local experts explain why you should take the solar leap.​ Above, the Caldwell home in Farmers Branch. Courtesy of DFW Solar Tour.

So you haven’t gone solar yet. Either because you’re cash-strapped, confused about how to do it or just cautious about taking the leap.

Two local experts - one a solar provider, the other a solar consumer advocate - say the financial obstacle of pricey equipment and the learning curve of designing your own off-grid energy system are being taken on by a new crop of renewable energy companies that are making the transition easier than ever.

In fact, a little unshaded portion of a roof and a monthly payment that replaces your current electric bill are about all it takes to plug your home into the free, unlimited power of the sun.

“Any reputable solar contractor will come out and provide a customized assessment for your home kind of show you specifically how it can benefit you,” says Scott Cramer, an expert in solar energy and president of Utah-based Go Solar Group, a company that offers solar power plans in Texas, Nevada and Utah. “What we try to do is we try to look and see what you're currently spending on your energy costs, and then we try to match or beat those costs.

“So, let's say that your average bill is $150; we try with solar to be right around that $150 as well. We design a specific system for your home that can maximize those returns. We have programs that allow people to go solar essentially with no money up front. So, there's not a significant upfront or capital investment that has to take place. We're just shifting where you're paying your money -- instead of renting the power from the utility you're owning the power from your solar [electric] system.”

Contracts range from leases in which the company providing the equipment retains ownership of the panels to long-term payment contracts in which the homeowner owns the equipment outright. Cramer says an ownership contract usually lasts about 12 years and is arranged to cost no more than the amount the electric bills would have added up to. After the contract ends, though, the power generated for the remaining 12 to 20 years of the panels’ lifespan is free of charge. For a household that spends on average $350 per month in electric bills, that’s a total of up to $84,000 that they’ll never have to pay to the electric company.

Cramer says he sees the ownership contract as a better arrangement for the homeowner because unlike a lease, it allows buyers to take advantage of an investment tax credit that matches what they pay for the system. For 2019, tax law offers a 30 percent credit to anyone who makes the move to solar power.

However, current tax law is set to incrementally phase out the credit in coming years, and tariffs on imported solar panels, inverters, controllers and other essential components will kick in next year, so the costs of going solar will rise in 2020 and beyond, Cramer says. Even so, he expects solar power will continue to draw homeowners away from conventional utilities because it shields homeowners from future spikes in electric rates and offers a reliable power source no matter what happens to the power grid.

“There are two main reasons to go solar,” Cramer says. “The first is: imagine if 15 years ago someone had said that you can prepay or buy your gas for 98 cents per gallon - that would be a pretty good deal. It’s the same way with energy - you're now not beholden to the large corporations that are changing or altering or moving your pricing - you're now becoming kind of the driver of that ship. And then second is the peace of mind. You can imagine Hurricane Harvey or some other natural disaster where the grid is not operational - having your own power support is a big deal.”

Larry Howe, founder of Plano Solar Advocates and board member for the Texas Solar Energy Society, agrees that ownership contracts are preferable.

“Economically, you’re always going to get the best financial trade off if you purchase the system. There are more companies now that will finance it, so you’re still purchasing it but just paying interest payments for a little while,” he says.

Howe says that with solar power costs having fallen in recent years and the abundance of sunshine in North Texas, there’s almost no reason for a homeowner not to install a system. In fact, he says solar installation now is where air conditioning was in the 1950s.

“There was a period of time where nobody had central air conditioning. [Now] nobody would build a house without central air conditioning,” he says. “I think there's no reason why every new home in Texas shouldn't be built with solar included or at least solar ready so that it's more suitable to add solar in the future. For existing homes, we don’t want to cut down any trees that may be shading a home, but in general, we could add a lot more solar.”

Howe says homeowners don’t have to buy a system that fully replaces their current energy use; they can save a significant portion of their yearly energy spend simply by installing a system that reduces what they buy from the utility company.

“In my case, we offset about 60 percent of our annual consumption with our solar generation. And I use Green Mountain energy, so I get the same rate for what I export as to what I pay. And so effectively, my bill is reduced 60 percent from what it would be if I didn't have solar,” he says.

“What we do in our Solar 101 presentation is tell people [to] learn about what's involved and what some of the trade offs are. And we encourage them to look at their annual energy consumption first and kind of get a ballpark of 12 months worth of bills - not the dollar amounts, but the kilowatt hours used - and then try to think about a system size that would offset 50 percent of that usage. Then once you know what that ballpark size is, think about reasons why you would want to offset more or less. That's something you can talk to your solar company about, to see what some of the trade offs might be. And we found that people that hadn't really been very energy conscious, once they got solar installed, they got interested in being more energy efficient, so that that same amount of solar is now going further, because they're using less.”

As for homeowners who don’t know if they’ll hang on to the same house for the next decade, Cramer says that home values typically rise by an amount equal to the value of the system, which means a seller can simply pay off the remaining contract with proceeds from the sale of the home. Also, the system is relatively lightweight and moveable, so homeowners can simply pack it up and move it to their new house.

As for durability, Cramer says current panels installed by reputable companies can endure winds of up to one hundred miles per hour and baseball-sized hail, which may also offer some protection against inclement weather to the roof itself.

The cheapest systems generate electricity during the day and power a home while selling excess energy back to the power company. At night when the home draws from the power grid, the cost of the electricity is usually offset by the credit generated during the day, which produces a so-called net-zero home.

Additional accessories offer battery backup for essential appliances in case the power goes out, with the top systems providing full battery storage for operating everything in the home uninterrupted, day or night for extended periods if the weather should knock out the power grid.

Although there are a few decisions to make and options to consider before signing a home solar power contract, Howe says the whole matter is about the same as buying a car: you need to read the fine print and look around before you sign on the bottom line.

“A couple of key things are, if you know someone who’s installed solar, ask them what they thought of their installer, and then always get multiple quotes,” he says. “It’s a large investment, and like in every industry, there's some really good companies out there, and there's a few bad actors out there. And you can kind of help weed those out based on getting multiple quotes because if an offer seems too good to be true, it probably is.”

Howe says reduced energy bills are reason enough to install solar power, but beyond that, going solar is one of the most effective ways to reduce our footprint on the earth.

“If you do your due diligence, it can be good economically, but it's definitely good for the environment. We in Texas are the largest emitter of greenhouse gases, and we don't really even know about it. So we need to be thinking about that, and this is one way we can do our part,” he says.

Howe said the reason we use so much electricity in Texas is because we get so much sun, triggering ACs to run.

“So why not take advantage of it?”