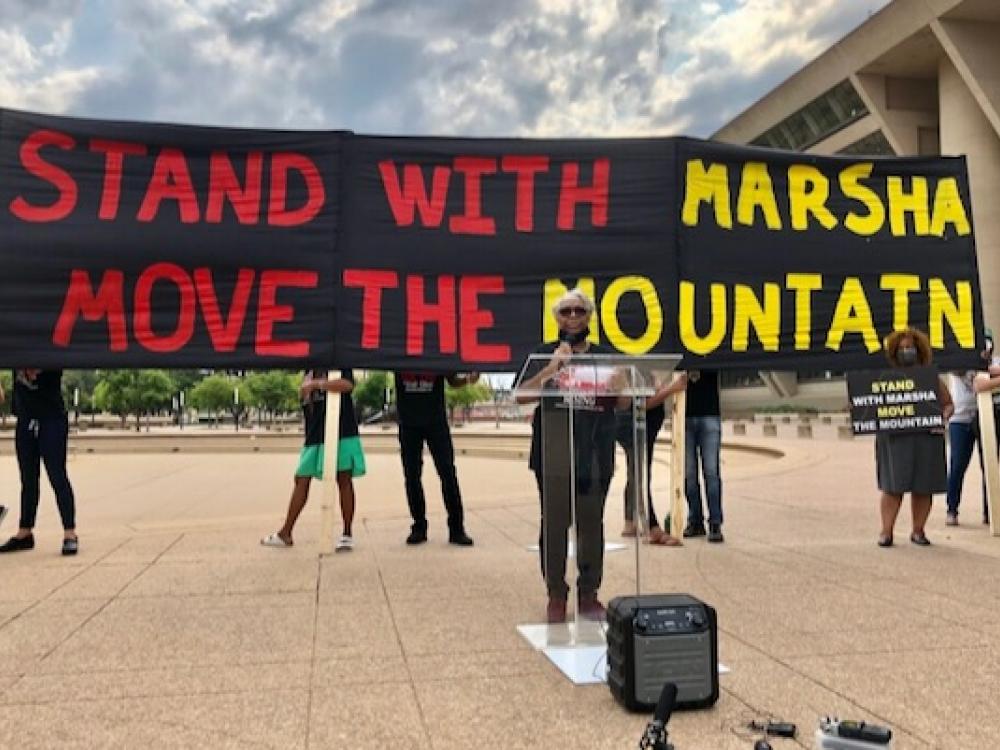 Marsha Jackson and her supporters demand action at Dallas City Hall on Aug. 5, 2020, after delays on the cleanup. Courtesy of Southern Sector Rising.

Southern Sector Rising sent a letter this week to Dallas City leaders, signed by more than a dozen local social justice groups, demanding that a mountainous pile of asphalt shingles dumped on property next to residential housing be moved.

“This has been here too long. I’ve been calling the city since February 2018. Nothing has been moved. Not one shingle has been. None at all,” said Marsha Jackson, a cofounder of Southern Sector Rising, a Dallas coalition formed in 2019 to fight racist zoning.

Take a tour of Shingle Mountain in this video from March 2019. Courtesy of Southern Sector Rising and Downwinders at Risk.

It’s been more than two years since Jackson woke up one morning to find what’s now called Shingle Mountain rising outside her southern Dallas home on Choate Road.

The property’s tenant Blue Star Recycling claimed to be recycling shingles at the 9500 block of S. Central Expressway. But tons more of the industrial material came in, then ever went out - make that 70,000 tons.

Jackson said she initially called the City of Dallas for help in February 2018. Dallas Morning News columnist Robert Wilonsky learned of her plight through Downwinders at Risk activist Jim Schermbeck. 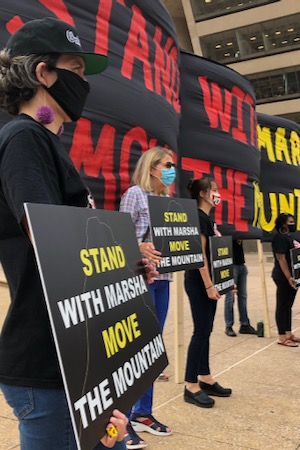 In December 2018, with pressure mounting, the City sued the company over code violations. And in April last year, a state district judge Gena Slaughter decreed that the shingles must move within 90 days.

In November 2019, after giving them an extension to clean up the mess in July, Slaughter found the now-defunct company in contempt for not following through.

In January, the City went back to court, this time demanding the land owner remove the shingles, per the Dallas Morning News. But the judge has yet to rule on the request.

Meanwhile, the state intervened in March on behalf of TCEQ.

Shortly after, according to a City statement, a contractor for the landowner began taking the shingles to a site in Navarro County but that site was not approved by the TCEQ. The site owner is working with TCEQ to obtain the necessary approvals to continue the removal.

The City said it is exploring options to remove the mountain of shingles off the property.

“The City has aggressively enforced against all responsible parties, including owners and operators, and continues to seek rapid removal and disposal of all remaining materials,” reads a statement from the City of Dallas. “We stand behind Ms. Marsha Jackson and all other Dallas residents seeking to ensure compliance with laws and regulations intended to protect human health and the environment.” (Read the City's full statement.) 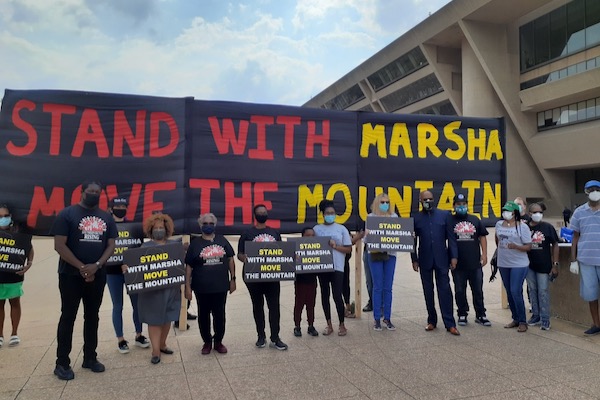 In the meantime, Jackson says she and neighbors have suffered from respiratory, dermatological and neurological health issues, due to the fumes from the asphalt pile, along with the mental stress of the living next to the industrial dump.

Southern Sector Rising said it wants the shingles moved by Oct. 1 or they will resort to a more “forceful” response from the coalition.

“There are no Shingle Mountains or illegal dumps in predominantly White residential neighborhoods in Dallas,” states the coalition’s letter. “The disparity based on race is clear and the discriminatory impact of Shingle Mountain is stark.”

Shingle Mountain is moving, thanks to mighty pushback