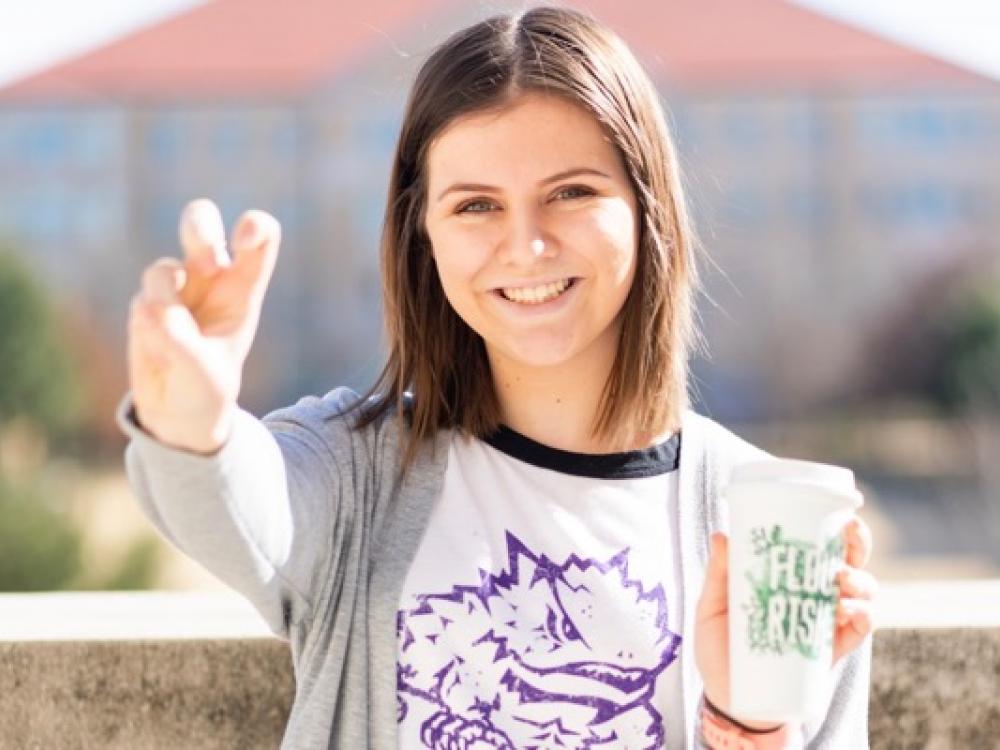 The purple Frogs of TCU are turning green, thanks to one eco-conscious student.

Before Nicole Gorretta enrolled at Texas Christian University in Fort Worth in September 2016, she had never in her life sipped from a Styrofoam cup. But at “Frog Camp,” TCU’s freshman-orientation session, it was the only option available.

“It was eye-opening.” she said. “The lack of recycling and the widespread use of Styrofoam was the biggest thing I noticed when I arrived on campus.” 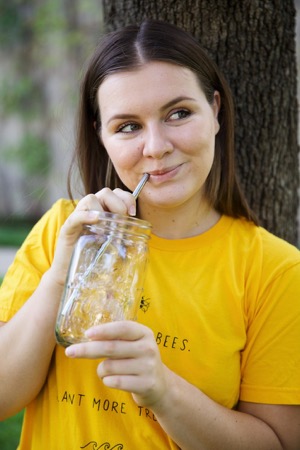 Nicole Gorretta carries a reusable straw, coffee cup and water bottle with her on campus. Courtesy of TCU Sustainability via Facebook.

In her hometown of Vancouver, Washington, Gorretta had long been a faithful recycler of glass, paper, plastic, aluminum and compostable waste. Now, to her disbelief, she was learning that her new Styrofoam-intensive school also had no institutional recycling program and not much evidence of a commitment to environmental stewardship.

“The lack of recycling and the widespread use of Styrofoam was the biggest thing I noticed when I arrived on campus.”

During her freshman year, Gorretta “just did what I had been doing” back home – recycling used-up household containers, paper and food waste. But as a sophomore, she joined the Student Government Association, became director of Sustainability, formed an all-new Sustainability Committee of students, faculty and staff, and set out to make huge changes on campus. Her motivation and determination were formidable.“Nicole is a force of nature,” said Dr. Becky Johnson, Professor of Professional Practice in the Department of Environmental Sciences, and chair of the Sustainability Committee. “She is so determined to make an impact on campus, and she is able to move mountains to make things happen.”

Gorretta’s first mission was to banish expanded polystyrene, known more commonly by its trademarked name, Styrofoam. Because of its extremely light weight and tendency to crumble, Styrofoam easily disperses into the surrounding environment, breaking down into microplastic pellets that can harm wildlife by contaminating food and water sources.

“The first year I was in student government, we started getting rid of Styrofoam on campus,” Gorretta said. “Sodexo [the university’s food-service and provider] was very receptive. Styrofoam dessert plates, Styrofoam cups by the water stations – we got rid of all that.” In their place now are reusable cups and plates, both at TCU dining facilities and at the on-campus Chick-Fil-A. 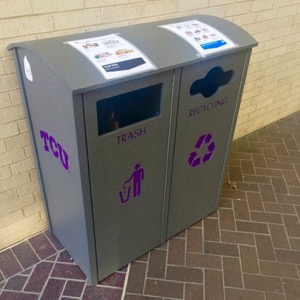 Gorretta and her sustainability team then set their sights on campus-wide recycling. Their efforts yielded a robust program that continues to expand.

“Recycling bins are not everywhere yet,” she said.

But they are no longer so hard to find, and the university is adding more of them each year. Along the way, the group helped bring an end to student-government paper print-outs (they’re now online), provided ongoing outreach to enhance students’ awareness of the need to recycle, organized TCU’s first-ever Earth Day Fair nearly 50 years after the nation’s inaugural Earth Day observance in 1970 and approved a 1,5,10-year sustainability plan to ensure the university’s environmental stewardship endures.

The self-effacing Gorretta, who says she has recently drawn inspiration from Swedish teen Greta Thunberg’s worldwide School Strike for Climate campaign, is uncomfortable taking credit for TCU’s track toward a more sustainable future. “

The work I’ve done has been with support from other students and student groups,” she said. 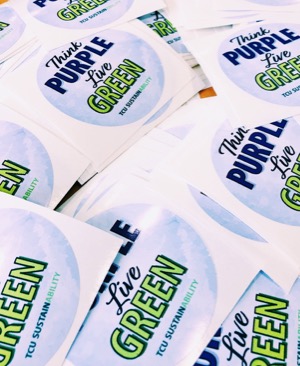 “She motivates other students to get involved, she recruits volunteers for events and shares her passion for sustainability with them,” Johnson said. “Her passion is infectious – you can’t help but jump on her bandwagon when you talk with her.”

“Her passion is infectious – you can’t help but jump on her bandwagon when you talk with her.”

Now a senior, Gorretta is preparing to graduate with a Movement Science degree and a minor in Italian. She is confident that in her absence, students, staff and faculty will continue to uphold TCU’s newfound commitment to the environment.

“When I arrived on campus, the Sustainability Committee did not exist and some people didn’t know what compost was. But there’s been a very large change. What’s great is that I’m leaving knowing that the university is going in the right direction.”

TCU Frogs jump in to save rhinos

Ministers conference brings environmental issues to the pulpit at TCU

Fort Worth businesses to share water-saving strategies at TCU