A Dallas-based business wants to help North Texans expand their green lifestyle in 2013. Recycle Revolution, a recycling collection company, recently added residential curbside compost pickup to its array of services. Called the Blue Bucket program, the service will allow residents to keep the bulk of their organic waste out of the landfill. Initially, it’s being offered to Lake Highlands neighborhoods in northeast Dallas but the company hopes to expand the program in the coming year. 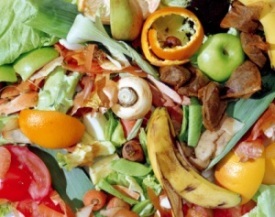 “People have been coming to us and asking for this,” said Melanie O’Neill, marketing manager for Recycle Revolution. “It’s a growing part of our business.”

The locally owned business, which accepts traditional recyclables at its drop-off center, already provided compost recycling service for its commercial clients. The Dallas recycler picks up waste from restaurants and hotels and takes it to a commercial compost recycler. However, O’Neill said increasingly they’ve been hearing from residents who don’t have the time or the space for a compost pile but prefer not to send their household kitchen waste to the landfill, where it takes up valuable space.

While backyard composting has become more common, some homeowners say they don’t want to tend a compost pile or collect waste in their yard that could attract critters and create a hazard to pets and small children. In addition, apartment and condo dwellers simply don’t have the yard space. 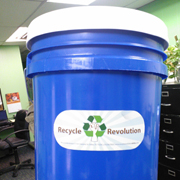 To offer residents an alternative green solution for disposing of food waste, Recycle Revolution partnered with the Lake Highlands-based Texas Worm Ranch (run by friend of Green Source and 2012 Leadership Awards nominee Heather Rinaldi), which sells worms and worm-based products to organic gardeners. The company requires large amounts of food scraps to feed its worms, which in turn produce castings used to make “worm wine,” an organic concoction used as fertilizer. O’Neill said both businesses saw this as an opportunity to take the operation full circle by picking up compost from surrounding homes and delivering it to the neighborhood business.

The service costs $8 per week, with a one-time fee of $20 for the 5-gallon bucket with compostable liners. Homeowners can fill the bucket each week with organic matter (excluding meat and dairy), along with egg shells, tea bags, paper towels and even pizza boxes cut into small pieces. As a bonus, customers earn compost credits and receive a bag of compost each quarter based on material produced.

So far, the program appears to be a success. O’Neill noted that while Dallas appears to be warming up to curbside compost services, the movement is quickly advancing in progressive communities across the country. Municipal curbside compost pickup is already offered in San Francisco, Seattle, Portland and Boulder.

In January, the city of Austin is launching a pilot curbside organics recycling program. Initially, residents in 8,000 households in the capital city will be able to deposit food scraps, food-soiled paper and yard waste in a green organics cart. Eventually, Austin plans to expand the program citywide to meet its zero-waste goal by 2040.

About: Recycle Revolution now offers curbside compost pickup with its new Blue Bucket program
Where: The service is initially being offered to Lake Highlands neighborhoods in the 75238 and 75218 zip codes. [Update: The service area has been recently expanded to include 75214 in the Lakewood neighborhood.]
Cost: $8 per week, with a one-time fee of $20 for a 5-gallon bucket with biodegradable liner bags.
Website