Bats hang at Parker County sanctuary while they heal 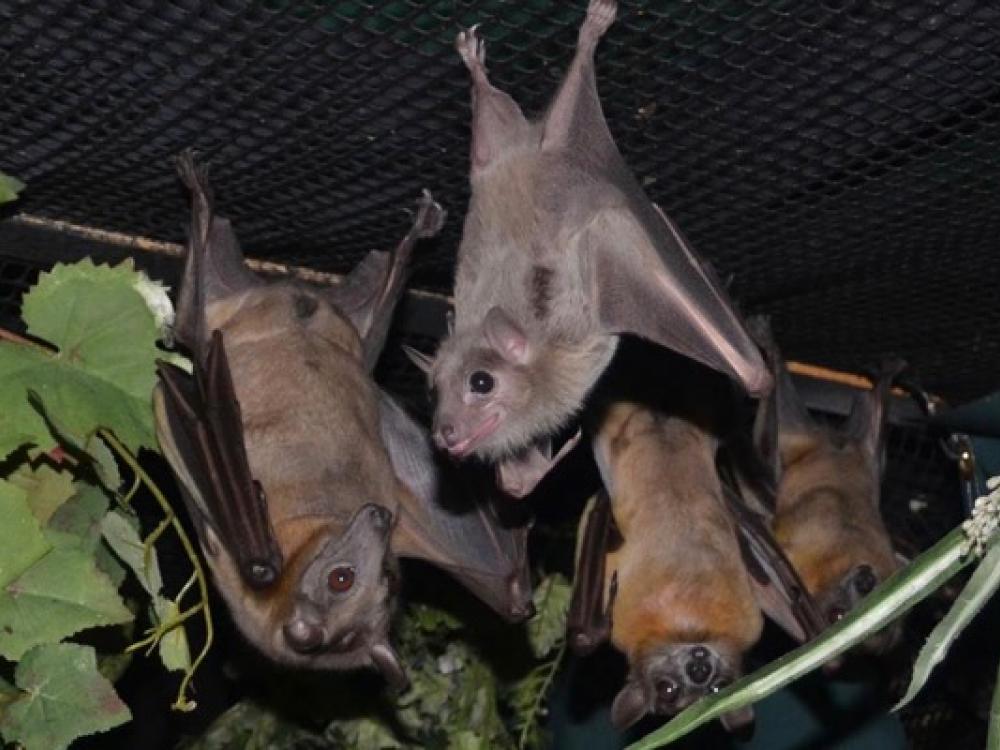 It doesn’t look much like a place called Bat World Sanctuary. There are no giant bat insignias on the front, no bat cave entrance, no high balcony from which to view the bat signal. It looks like dozens of other large modern metal barns along the chalk-rock roads that lace the folded, mesquite-covered West Texas hills between Mineral Wells and Weatherford.

But inside, it’s definitely Bat World Sanctuary, the planet’s largest facility dedicated to the rescue and rehabilitation of bats, plus education about the plight of its only flying mammal. Founded by Amanda Lollar in 1994. 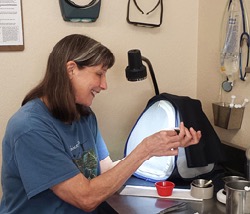 “I was hooked for life when the first bat I rescued looked me square in the eyes,” she says. “I saw an intelligence I had never before witnessed in any animal.”

In the past 22 years, thousands of bats have been brought to Bat World, with up to 90 percent of them released after rehab and usually returned to the area where found. Over 2,000 starving and injured orphaned bats have been hand-raised and released. Bat World was twice nominated for the Indianapolis Prize, a coveted international conservation award, and in 2016 it was given the Carole Noon Award for Sanctuary Excellence from the Global Federation of Animal Sanctuaries.

Amanda Lollar is the founder of Bat World Sanctuary.

A Bit About Bats

Bats are not flying mice or even remotely related to rodents. They are fur-covered mammals of the order Chiroptera, ancient Greek for “hand wing,” and most closely related to primates and lemurs. They like it warm and most species are found in the tropics, with Indonesia being the most abundant in bats.

Frugivore bats that eat fruit and pollen can be large, with some the size of a small squirrel. They are mostly crepuscular, active during the dawn and dusk hours, and like cats see in color and low light. Through their vital role of pollination and seed dispersal, fruit bats make possible 450 commercial products and 80 medicines. They can be rather gregarious and goofy. A few bats in the tropics suck blood or dine on fish.

"Only three species of bats out of 1,200 species actually drink the blood of other mammals and a few other species eat fish and frogs," says Lollar.

The intense yet delicate bug-eating insectivores, so called microbats, just one to two inches in body length, are what you find in Texas. Those from the northern portion of the state migrate to warmer climes in winter. They can live surprisingly long for small creatures, from five to 20 years, and are active at night.

Being nocturnal hunting mammals minimizes microbat contact with hawks and other predators, and reduces competition with birds in general. Some grab airborne bugs using sophisticated echolocation system to find their prey. Their eyesight is about the same as ours with the added ability of being able to see well in dim light. Those that swoop down for bugs on the ground or plants have better vision. Airborne bats eat from 20 to 80 million insects in a lifetime. 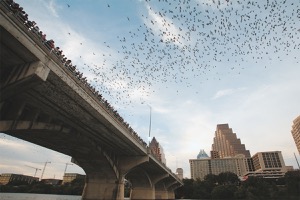 The Mexican free-tail (Tadarida brasiliensis), also known as the Brazilian free-tail, gets most of the attention in Texas due to their enormous colonies. The one in Austin at the Congress Avenue bridge attracts big crowds to watch over 1.5 million bats emerge at sunset. The largest bat colony in the world, with over 15 million, roosts at Bracken Cave in the Hill Country. It is the official state bat of Texas and Oklahoma.

But also frequently treated at Bat World are the more solitary southern yellow bat (Lasiurus ega) that camouflages itself by looking like bark or dead leaves, and the brawny yet soft big brown bats, both eastern (Eptesicus fuscus fuscus) and western (Eptesicus fuscus pallidus). The eastern red bat (Lasiurus borealis), which favors forested areas and consumes mostly moths and beetles, is occasionally brought in.

Half the bats in the U.S. are listed as rare, threatened or endangered. For their small size, they are slowest reproducing mammals on Earth and most species birth only one pup at a time. They are exceptionally vulnerable to extinction.

Into the Bat Caves

Bat World’s 7,200-square-feet facility contains the rehabilitation clinic, kitchen and storage for preparing bat food, offices and living quarters. But the beating heart is flight enclosures that house bats unable to be released due to injury or rescued from the pet trade or research facilities. 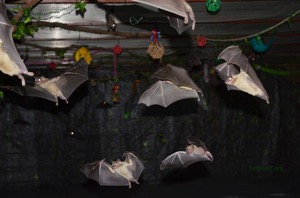 Fortunately for us, Bat World provides live cams to view the bats. Fruit bats emerge from their roosting areas around 7 to 8 p.m., with insect bats coming out an hour or so later. They eat, socialize and groom each other’s fur. You can even log on and share comments.

Lights are kept low for the bats’ comfort. Metal mesh and fabrics cover the walls and ceilings of the large expansive rooms to enable grabbing. The floors are padded to protect older bats and those infirm from injuries from falls. Artificial ivy plants drape from the walls to mimic forest conditions.

Egyptian fruit bats and one small Jamaican fruit bat enjoying their semi-outdoor flight area. All are rescues from zoos, research and the exotic pet trade. Courtesy of Bat World Sanctuary. 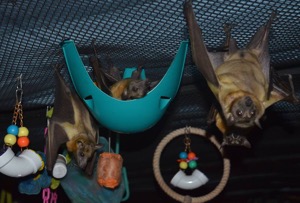 Fruit bats enjoy branching structures and hammocks that evoke leafy trees in their partly open-air enclosure. They crawl around and swing from the ceiling, and dine on bananas, apples and pears, plus sweet potatoes that they enjoy gnawing on. A ridiculously colorful play area is festooned with hanging crib toys and odd objects. The bats emit an array of eccentric noises and seem to razz each other.

Many of the fruit bats are rescued from research or surrendered by owners who did not care for them properly. As a result, some suffer from arthritis and other ailments. Peekaboo, a rescued Egyptian fruit bat, is Bat World’s very personable ambassador, but Little Drac is a big favorite.

Insect bats have crevices and chambers that evoke rocky caves. They dine on live mealworms in bowls and flit about quite a bit.

“We pioneered the push for enrichment for bats in captive environments,” says Lollar, “whether it be in research, zoos or nature centers. To our knowledge, enrichment for insectivorous bats was never addressed or considered before Bat World Sanctuary's standards for captive bats were created.”

Getting Downed Bats on the Wing Again 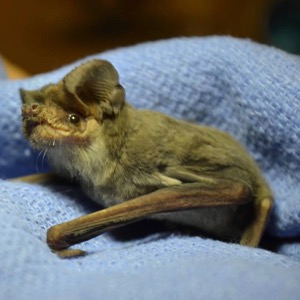 From 700 to 1,500 bats are brought to Bat World each year, mostly Brazilian free-tailed and big brown bats. It’s especially bad in cooler weather when bats seek out human structures for warmth.

Reasons bats are brought to Bat World include:

• Found on the ground injured, dehydrated and/or starving.

• Sprayed with pesticides or herbicides from ag operations.

• Coated in oil or chemicals from industry operations.

• Removed from buildings where they’re roosting.*

• Poisoned by fog used for mosquitoes.

• Downed by storms or bad weather.

• Caught in glue traps for rodents. 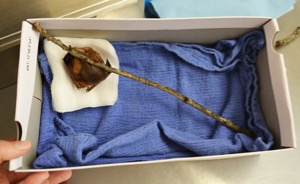 Insectivores require a great deal of nurturing to heal. Bats are brought directly to Bat World or to a licensed bat rehabilitator. It takes one to two months for a bat to recover from moderate injuries, entailing 40 minutes to an hour of treatment per bat each day. The average cost for a month of food and medicine is $25 to $35. Watch bat rehab in action here.

The incredibly tiny and delicate orphaned bats take months to be raised and released. The intricate process requires swaddling the pups in warm towels, saturating foam tips with bat formula, and encouraging them to suckle and defecate. At six to eight weeks they begin feeding from milk droppers and then mealworms. Flight evaluation and training happens at eight to nine weeks with release at 10 to 12 weeks if not too injured.

If you find a downed bat, while wearing thick gloves contain the bat in a towel and place in a ventilated container with a lid. Do not try to catch it while flying or you will injure it. Hold until nightfall and see if it can take flight. Detailed tips for bat rescue here.

But the best tactic is to ensure the bat is safe and then contact a bat rescue volunteers here. Bat World periodically offers a one-day Bat Rehabilitation Basics Workshop.

If handling wild animals is not your thing, Bat World recommends 911 Wildlife.

* Bats are a protected species and it is illegal to kill them or use poisons or chemicals on them. Bat exclusion measures are not to be performed during nesting season from mid-May through early August because young bats unable to fly may be present.

Bats are under siege. Habitat loss and illegal destruction of bat colonies by property owners and pest control companies are huge factors. Ingestion of insects tainted by pesticides is another. White-nose syndrome, which was spread to the U.S. by a caver, is caused by a cold-tolerant fungus and has killed more than seven million cave-dwelling bats.

“Educating others about the importance of bats is one of the most critical things anyone can do to save the species,” says Lollar.

October being Bat Appreciation Month is a prime time to do that. One way is to send a bat greeting. Or do a bat presentation to your school or group using Bat World’s excellent materials.

Habitat loss and the lack of standing dead or hollow trees is a big bat threat. Erecting bat houses can help, but only the right ones installed properly and with a pup catcher. More info on Bat Houses.

Lollar and her crew constructed the Bat Castle near Mineral Wells. Located on protected land, it was designed to Bat World’s specifications and funded by donations and a grant from the Chase Giving Campaign. It will provide roost and nursery for thousands of insect-eating bats. Video here.

Of course, donating to Bat World is a significant way to help. Do that by sponsoring a bat.  Or shop at their very clever Bat World Store.

Bat World Sanctuary - A Forever Place for Bats in Need

The Bat Goddess and Her World

Lollar works at Bat World seven days a week, 365 days per year, 12 to 16 hours per day. Not just hands-on bat rehab, but also training zoologists, veterinarians and other animal care professionals from around the globe. When days are long and challenging, what motivates her to keep going?

“The bats themselves,” says Lollar, “They are grateful for everything — from having new enrichment added to their enclosure to being rescued from death and then released back to the wild. They are the most intelligent, humorous, gentle and exquisite creature I have even known.”