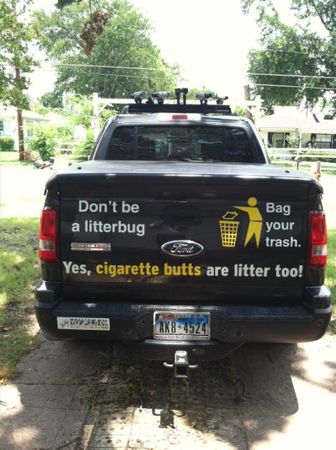 Green Source DFW Sustainable Leadership Award finalist Kenneth Winn wears a black hat but he's one of Pleasant Grove's good guys. For nearly a decade, the 71-year-old has been picking up trash and discouraging litterbugs in his southeast Dallas neighborhood – all on his own initiative.

"I don't make a dime," said Winn, in a city of Dallas video. "It's just a pleasure doing this."

Winn, who was a runner-up for this year’s Green Source DFW volunteer of the year award, lives on a four-acre lot, along with a small herd of goats and sheep that keep his backyard sheared. He said he wants to improve his neighborhood’s reputation.

“I had heard many comments about Pleasant Grove being a bad area and I am doing what I can to change that image. I want to put the ‘pleasant’ back in the grove,” he says. 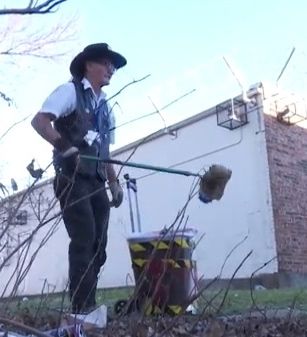 On most days, he can be found cruising the streets in his litter patrol truck, which Dallas Councilmember Rick Callahan said looks a rolling billboard for litter abatement.

Kenneth Winn stars in a city of Dallas video. WATCH.

“I had a sign company make the signs that are on my truck to try to educate people to quit littering up our neighborhood,” Winn explains.

It’s outfitted with two waste cans so that trash can be separated from recyclables. He makes his rounds early, often before 7 a.m., cleaning up South Buckner Boulevard, Lake June Road and Bruton Road. He also pulls trash out of creek beds and removes "bandit" signs – those ads cluttering telephone poles and city easements. He hauls a trailer for large bulky items he comes across, like tires and car fenders. 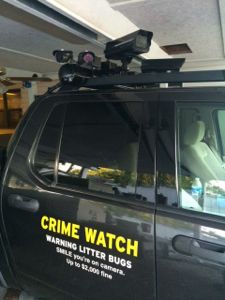 “I also have a four-wheeler that pulls a cart with banner signs against litter. I use it in parades and I go out on my four-wheeler around several blocks in my neighborhood and pick up litter.”

Winn says he doesn’t catch too many people littering. They may be deterred by his "litter cams” mounted on his truck, complete with video monitors and a DVR.

“It is recording any time my truck is out,” he says.

When he parks his truck in front of convenience stores, would-be litterers get the hint. 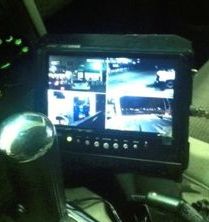 “People have to pass my truck when they come out of the stores and they see on my monitor that they are being recorded so they don't throw down litter or trash on the parking lot. They walk over to the trash receptacle to dispose of it as they should.”

Other litter patrol groups that Winn works with include 30/30/30, Ten on Tuesday, Operation Dallas Beautification and "It's My Park Day."

“I am out in the area about everyday doing Meals-on-Wheels and I am a Dallas Police Volunteer. When I see litter I stop and pick it up and I park my truck so everyone can see the signs on my truck.”

He also has magnet signs that say Dallas Police Volunteer so that folks “won't think I am being paid to do this.” 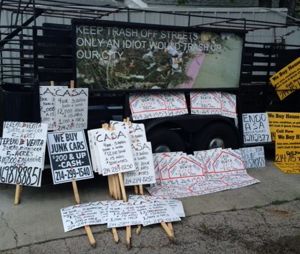 Dedicated to a never-ending project, Winn enjoys his mission, which has its surprises. Like the time he found a $50 bill – twice.

Right, Winn picked up 48 "bandit" signs on one day in April.

A small reward for keeping his little part of the world clean.

“Litter and trash attract crime and mischief. [That’s one reason why] I am an advocate for litter control.”

Watch the city of Dallas video about Kenneth Winn.

Community activist puts the pleasant back in the Grove