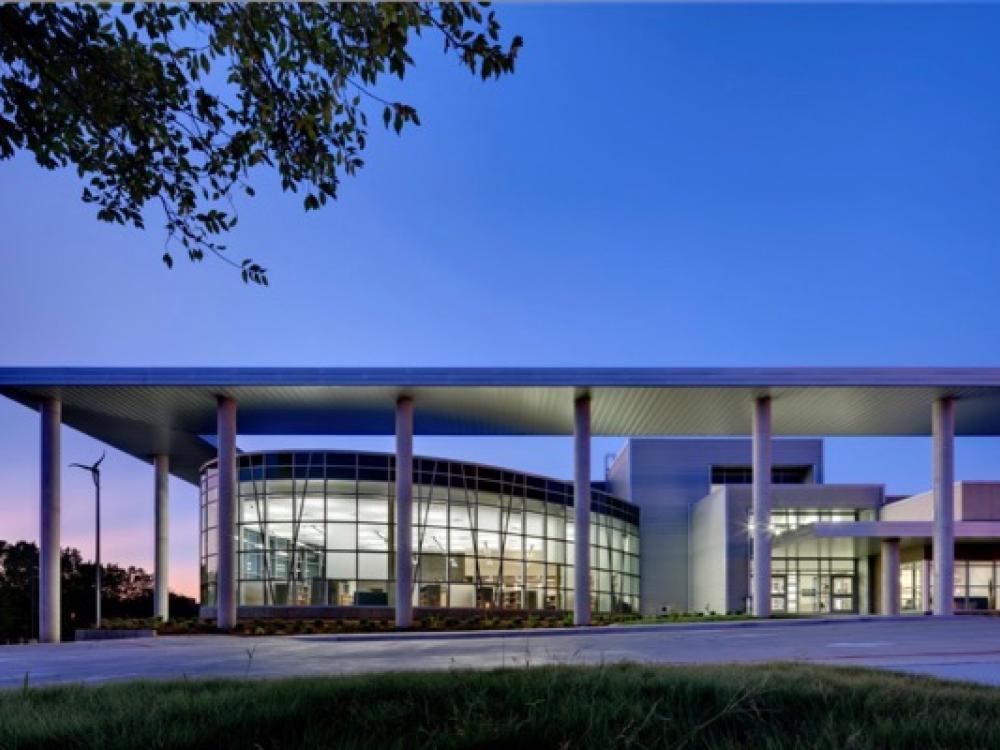 Lady Bird Johnson Middle School in Irving was green before it was cool.

I recently had the chance to tour this amazing North Texas campus, which opened on Pioneer Drive in 2011. Administrators say it was the first net zero school in Texas and the largest net zero middle school in the country at the time. 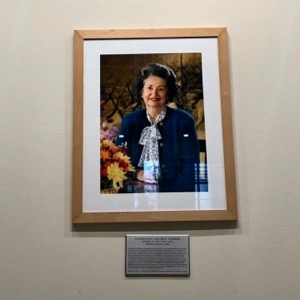 At the initial planning of the 152,000-square-foot facility back in 2008, the designers, Dallas-based Corgan Associates, were committed to creating a campus that was a living example of energy-efficiency and sustainability and it exceeded everyone’s expectations.

“I always joke that we weren’t leading edge with this building, we were bleeding edge,” said Jim Scrivner, executive director of Facilities and School Support Services at Irving ISD. “When we designed and built Lady Bird Johnson, the technologies were just coming available to allow us to truly realize a net zero building of this size.”

Net Zero means that a building produces as much energy as it consumes from the power grid over a one-year period.

Nearly everything in the school’s construction was geared to be energy-efficient, starting from the top down with a reflective white membrane cool roof. All windows are high efficiency and there is upgraded insulation in both the roof and walls. There are also sun shades on select windows and wide overhangs on the west side of the building to block excess sun infiltration on hot days. 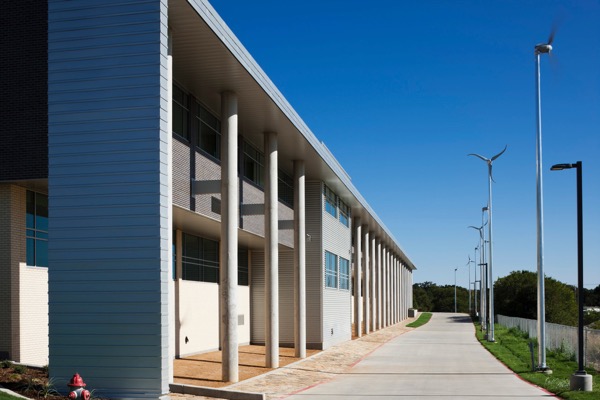 Nearly 3,000 Solyndra photovoltaic panels produce 99 percent of the school’s energy usage. Unlike flat solar panels, the Solyndra panels are made of cylindrical glass tubes that can capture the sun’s energy from 360 degrees by grabbing not only overhead sunlight but also reflected energy from the white roof. 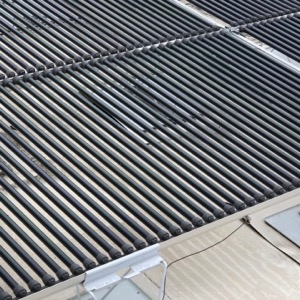 Though the 360-degree tubular solar panel concept seemed innovative when the school was built, the Solyndra panels have turned out to be somewhat fragile. When several were broken in a hailstorm, the school’s maintenance department replaced them with Kyocera flat panels which turned out to be 30 percent more efficient. The original maker of the tubular panels, Solyndra, is no longer in business.

In addition to the solar panels on the roof, the building makes about 1 percent of its energy with a dozen wind turbines that skirt the western edge of the campus. Scrivner shared that though the solar panels are really the major energy producers for the school, the wind turbines are a wonderful visual educational tool for kids and visitors. The spinning windmills are quite striking, lined up against the blue Texas sky.

“They are great advertising as people drive by,” Scrivner said. 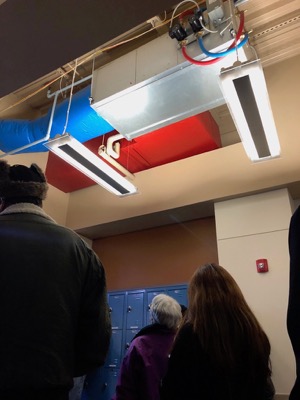 A geothermal HVAC system for the entire school reduces energy costs related to heating and cooling by 30 percent. It accomplishes this by pumping water through a system of 468 geothermal wells that are 250 feet deep (under the athletic field and parking lots) where soil temperatures are a constant 55-60 degrees. The water in the wells is connected to 105 water-based heat pumps in the school where they exchange the heat or cool (depending on the season) with the temperature of the soil, thereby heating or cooling the water. According to Energy.gov:

“Geothermal Heat Pumps are more energy efficient than traditional HVAC systems and can help lighten the load on the electric grid, especially during summer peak demand. In addition, they can help reduce carbon emissions thanks to their high efficiency.”

A geothermal HVAC system for the entire school reduces energy costs related to heating and cooling by 30 percent.

All heating and air conditioning in the school is zoned so that only areas in use are running at any one time. So if a gym is empty, its HVAC can be shut off as well as lighting and other systems. The same for a classroom zone, lunchroom or even the bathrooms. Ceiling-based HVAC units and heat pumps are easily visible so that students and visitors can see the equipment that is helping to keep their air comfortable. 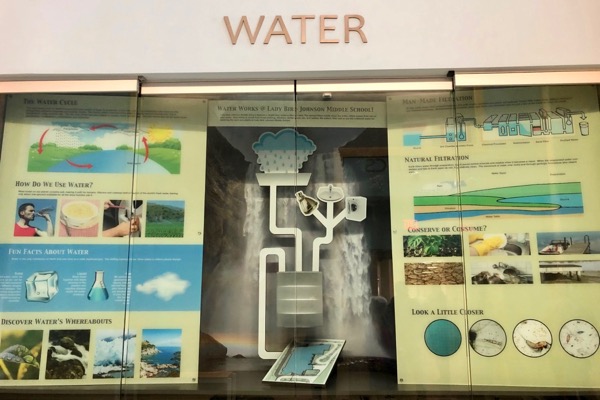 The school's 900 students are encouraged to learn about the building’s green aspects. Photo by Andrea Ridout.

Water-saving features include low-flush toilets and other plumbing fixtures and xeriscaping (low-water usage and native plants) in outdoor landscaped areas.

Also a 4,000 gallon underground cistern captures rainwater as well as runoff from the athletic area showers and lavatories plus condensate from all air-conditioning units. The stored water is used for landscape watering, not only saving valuable resources but also thousands of dollars per year in water bills. The athletic fields are watered utilizing an 1,800-foot-deep water well that can also top off the underground cistern if needed. 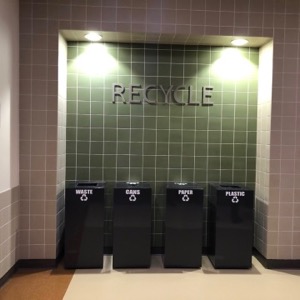 Other green initiatives at the school include recycling stations in key locations that are easy to see and use, LED and CFL lighting that automatically shuts off when classrooms and other areas are not in use, bio-plastic dinnerware in the lunchroom and touch-free hand dryers in bathrooms (eliminating paper towel waste). 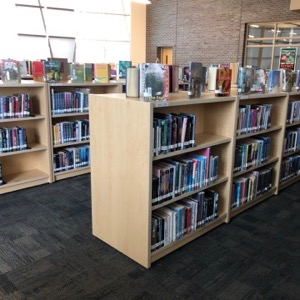 The castors are hidden on these movable shelves. Above, recycling stations are prominently displayed. Photos by Andrea Ridout.

Cost savings are also realized by utilizing certain areas in the school for more than one purpose, thereby cutting square footage in the building’s construction. For example, all shelving in the library is on casters so that they can be easily moved to one side and the room can be quickly converted for meetings or other uses. 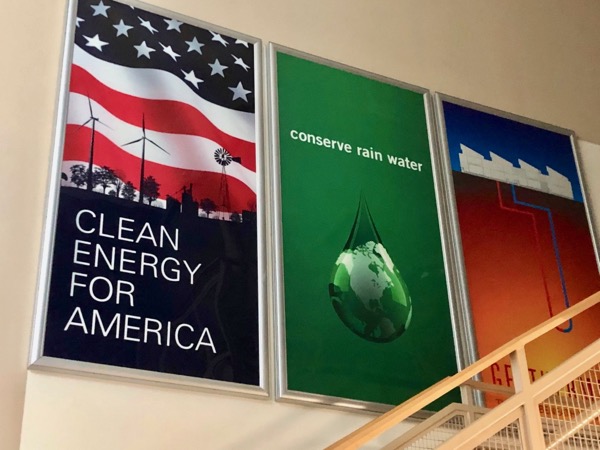 The school's mission is as much about education as saving energy. Photo by Andrea Ridout.

Lady Bird Johnson Middle School’s mission is as much about education as it is saving resources. Student involvement is encouraged and even relished in this hands-on laboratory.

All 900 students, sixth through eighth grade, are encouraged to learn about the building’s green aspects through their science classes, tours of the building and access to online data about the school’s operation.

Fourth-graders from all over the Irving Independent School District come to the school every year to discover firsthand its eco features such as energy and resource conservation, solar and wind produced energy and rainwater collection. Colorful exhibits and interactive touch screens dot the hallways to instruct both students and visitors.

Colorful exhibits and interactive touch screens dot the hallways to instruct both students and visitors. 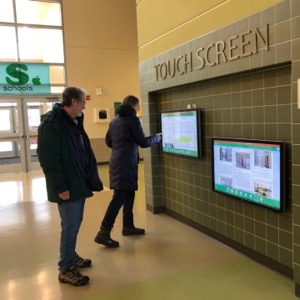 Visitors from around the world have toured Lady Bird Johnson Middle School. Photo by Andrea Ridout.

Visitors from across the U.S. and over 40 countries have toured Lady Bird Johnson Middle School since its opening, guided by specially selected student ambassadors. Not too long ago, a member of the German Parliament dropped by as well as managers from a Japanese energy company who wanted to see the school’s energy systems up-close.

A rooftop observation platform is one of the most popular spots for both students and visitors to view the solar array and reflective roof membrane but it is also not uncommon to spy a drone flying overhead, taking photos or video.

The facility cost $29 million of which approximately 12 percent was the additional cost (roughly $25 per square foot) for the green upgrades. By saving more than 80 percent of the building’s operation and maintenance costs (about $200,000 each year), any overages paid for themselves in less than 8 and a half years and now all savings are simply a bonus. For Irving taxpayers, the school is a major accomplishment, saving millions of dollars over the life of the building. Plans are already in the works for similar schools in the area.

“Cost is always a major concern with new school buildings," said Scrivner. "However the costs of many of the systems employed have gone down significantly. For example, we paid almost $5 per watt for our solar array but current costs are below $2 per watt. This will relate to a much faster return on investment.” 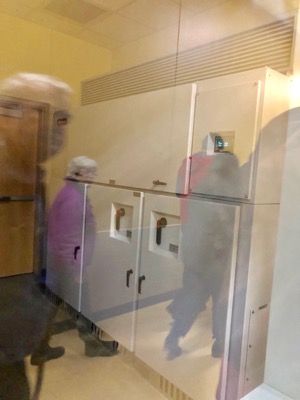 Some of the cost savings in the building were totally by accident. For instance, the building’s huge DC power inverters (that convert the solar energy into AC power for actual usage) are housed in a climate controlled glass-walled room so that visitors could see them. As it turns out, they run more efficiently than normal and the manufacturer is expecting them to last over 10 percent longer than a unit that is not enclosed in this way.

Other efficiencies are hidden such as the lack of copper wire for hard-wired internet transmission that is installed in most new schools. At Lady Bird, almost everything is Wi-Fi, down to the laptops and computer tablets that are used by teachers and students, saving tens of thousands of feet of copper wiring.

About: Lady Bird Middle School is a 152,000-square-foot facility opened in 2011 Irving ISD. The school building has won several environmental awards and is designated as a LEED Gold building, a rating system administered by the U.S. Green Building Council.