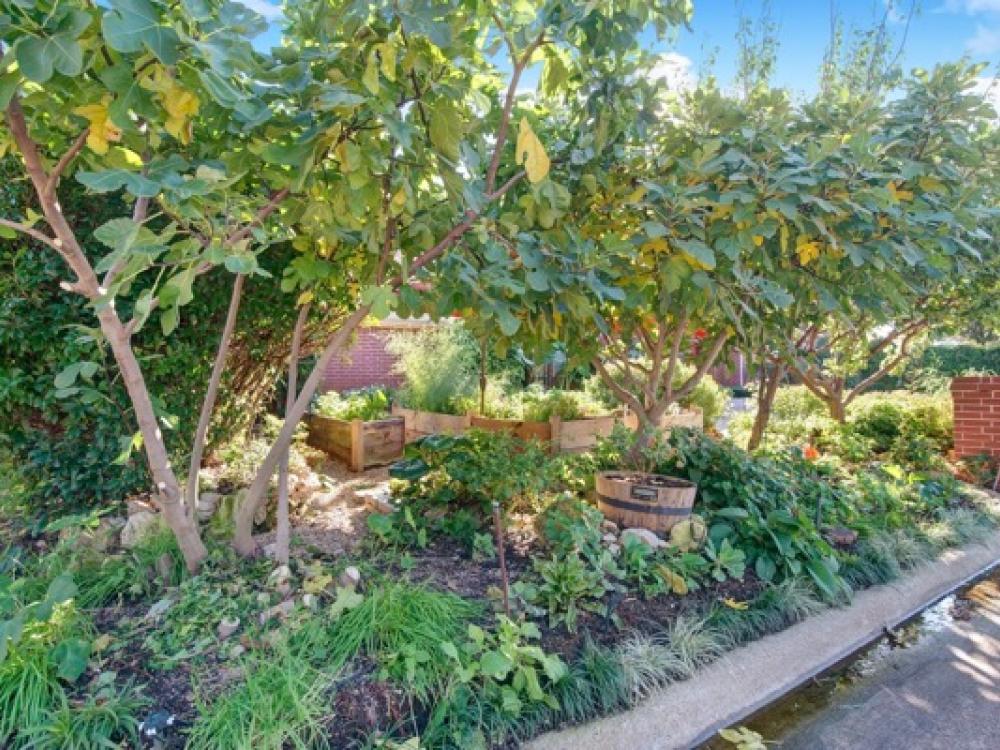 Peggy Ploss's front yard in Addison is filled with fruits, vegetables and flowers - but not grass.  Photos by Dave Hall.

Plants are tucked under closely packed trees, vining skyward, filling raised beds, spreading underfoot, spilling down to the curb – on a street of manicured lawns and pruned shrubs.

There’s not a blade of lawn grass to be found.

Instead, through the seasons, she and her neighbors and garden helpers browse winter greens, spring asparagus and summer papayas, figs, apricots, tomatoes and peppers from the planter boxes, trees and beds. 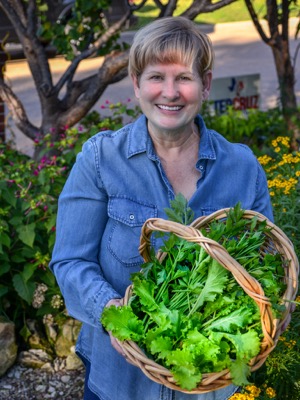 Peggy Ploss, a cancer survivor, receives physical and emotional rejuvenation from her garden.

Ploss’s garden is also medicinal. The herbs from it, along with the chemical-free foods, helped her recover from chemotherapy for cancer.

And it’s a social spot. There’s a welcoming bench close to the curb.

“Several people in my neighborhood come and sit in my garden,” she says, smiling. “If they’re stressed out they can watch the life that’s going on in it, the butterflies the bees… Families bring their children here to teach them what a garden is and where their food comes from.”

Some of them even leave love notes to the garden. 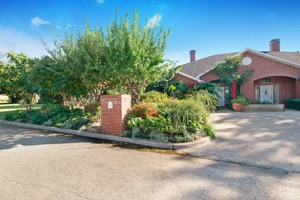 But the exuberant vegetation rankles some of the neighbors. In July, persistent complaints to the City got a common response from city governments: a citation. The grounds for the citation are not entirely clear. Ploss is working to find out, before her Nov. 6 hearing in front of either a judge or the city attorney. She hopes instead that this sparks a community discussion of edible gardening and updating of ordinances to meet a progressive population and a rising yen for green, clean, sustainable and homegrown.

The fracas brought attention to this example of an old-made-new style of gardening that has captured imaginations in Seattle, Tucson, Portland, Toronto, Houston, San Francisco, London and around the world. These gardening traditions and techniques linger in South America, parts of Mexico, southeast Asia, from ancient times. Re-imagined as “permaculture” by Australian naturalist Bill Mollison in the 1970s, this approach is considered by many noted designers as a wave of new, cleaner, greener more sustainable design. Applied to gardening, it offers greater food self-sufficiency, better health, economy and conservation of resources and wildlife. 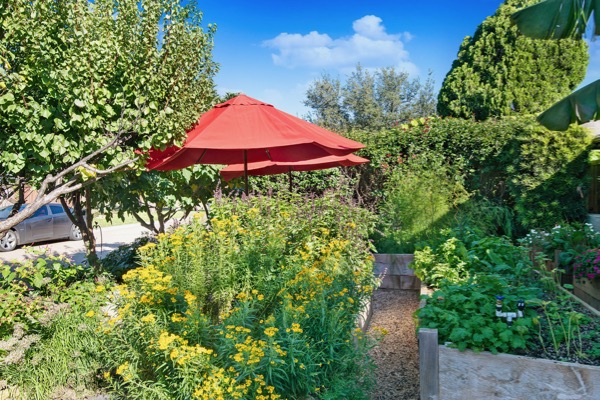 “I say it’s about how I feel,” said Ploss, standing in her living room in front of a picture-window view of her back garden. “How I feel after I’ve been out in the yard.”

That’s where she started the regeneration process for her health.

“These gardens are designed using the same principles that nature uses to create healthy plant communities, so that the different plantings and other elements interconnect and nurture one another,” explained a leading U. S. permaculture designer, Toby Hemenway, at Dallas County Community College District’s annual Sustainability Conference in 2015.

“They use time-tested techniques honed to perfection by indigenous people, restoration ecologists, organic farmers and cutting-edge landscape designers,” he elaborated in his book Gaia’s Garden.

“Nature can do 1,000 things at once…harvest, store and purify water; renew and enrich the soil; clean the air and scent it with perfume.” 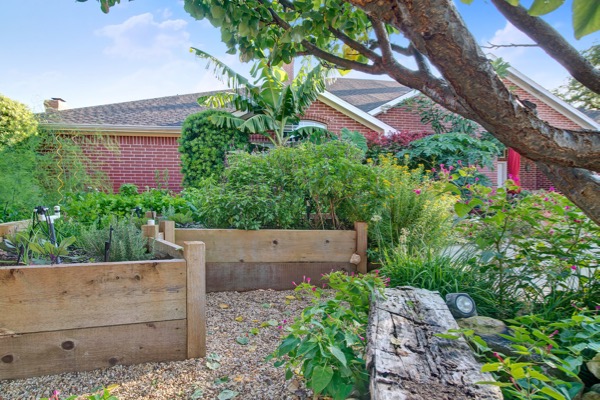 Gardens based on nature’s processes take less work once established and can be packed with fruit and edible greens. Their care takes fewer inputs, and they produce more than they consume in resources.

Even in Dallas and its ever green, pruned and mowed environs.

Peggy’s garden now fills the small front yard, a side yard and the entire back patio area. It began 11 years ago with some accidental sunflowers.

Before moving to the condo, she had been gardening alongside her husband in two rented plots in Addison’s community garden. With their divorce and her subsequent move, she kept both plots, gardening there for two years.

“In 2007, back in the condo backyard, there was a wood deck,” Ploss recalled. “There were no birds. I said, my goodness, this is terrible. I had been putting out birdseed, so seeds fell through the deck. Then sunflowers came up there. I unscrewed parts of the deck and dismantled it and let the seeds grow. I planted more, and I had a big plot of sweet sunflowers growing there. That’s what got this whole thing started.”

Ploss saw more to do. She built planter boxes and began growing where the deck had been. Later, three 2-feet by 4-feet boxes followed in the front yard. Now there are seven that form a cross shape, viewed from above.

“In 2008, I decided I needed to go through a complete body cleanse and regeneration… Find out exactly what I needed to do to sustain my body and rebuild it. Because I didn’t want to have problems in the later stages of my life, so that I can have good health to accomplish a lot of things.” 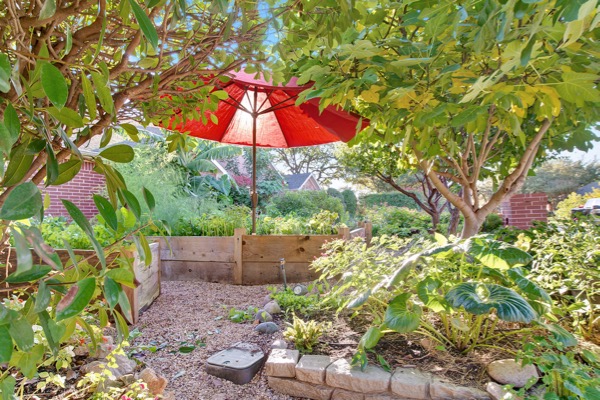 “That’s when I went traveling, looking at the Earth to see how chewed up it was. I told a friend who was staying with me don’t let my sunflowers die! She watered. They got huge!”

While Ploss credits the clean air, water, soil and food of her garden as a large factor in her health recovery, she notes six or seven other benefits from permaculture gardening.

One: “It’s supplying me a food source. It’s giving back to me rather than having me spend money maintaining grass and hedges.”

Two: “It’s on a drip system with micro-sprayers… So I’m not wasting water running everywhere…I do keep it moist, that’s why it’s so lush.” 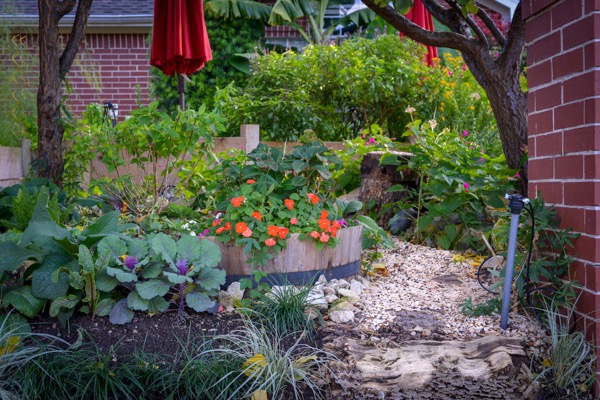 Three: “It does take maintenance because it grows out. For the most part it will regenerate. I don’t have to replant a lot. Even the Thai basil out there came back from seeds.”

Four: Food cost savings. “A bunch of kale is $2.99 a bunch at the store and you know, a seed packet is nothing compared to that.”

Five: “The diversity of life that it brings. Now I have birds, now I have squirrels. We didn’t have any rabbits in the neighborhood [before].”

Six: Learning and community. “Ruth across the way brings her grandchildren over here and educates them. So does the family up here on the corner… When they go to the grocery store, they recognize how [their food] grows.”

Disclosure: The reporter is also a landscape designer who subsequently has provided consulting services to the homeowner.