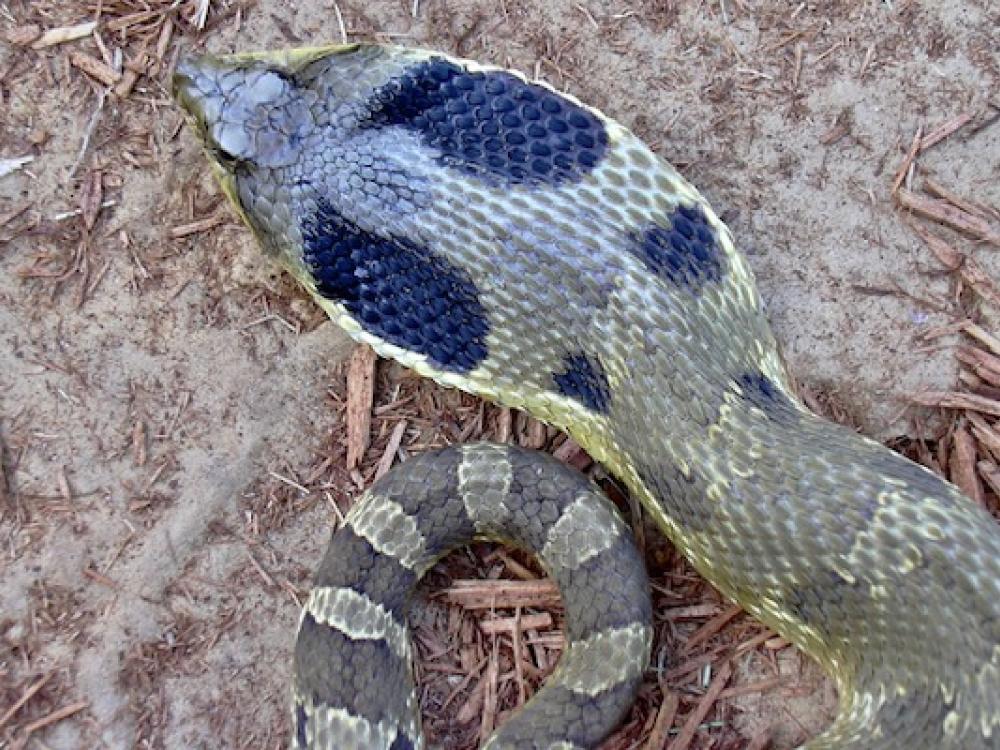 An eastern hog-nosed snake flattens its head and neck as a bluff to try to startle an enemy, but it is harmless. Photo by Michael Smith.​

Walking beside a small pond, my friend spotted a snake in the vegetation near the trunk of a willow tree. She guessed it was a harmless water snake and was ready to grab it, but hesitated and yelled:

It briefly froze and then took off in a nervous and determined sprint toward the water. I saw a couple of feet of muddy brown snake disappear behind the willow, likely down into the murky water.

Meghan was exactly right to hesitate. I’ve done the same thing, seeing a chunky dark snake taking off toward the water but not getting a clear enough look to positively identify it.

That, along with some luck, is why I have been in the field with venomous snakes on and off for nearly 60 years without being bitten by a copperhead, cottonmouth, rattlesnake or coral snake.

How do we identify these potentially dangerous snakes?

I’ve caught many snakes, either to admire them up close or photograph them. Correctly identifying whether a snake is a venomous species is crucial.

Meghan ID’d the snake based on seeing parts of body, partially concealed in grasses and weeds, and that’s a tough call.

Did she rely on the rules people talk about, like triangle-shaped heads, cat-eyed pupils, or the old “red-touches-yellow” rhyme?

It’s my belief that very few amateur or professional herpetologists stop and think through those rules when in the field. Not only that, the rules are too narrow, misleading and impractical. Let’s review some of those rules, and then I’ll tell you how we actually identify them. 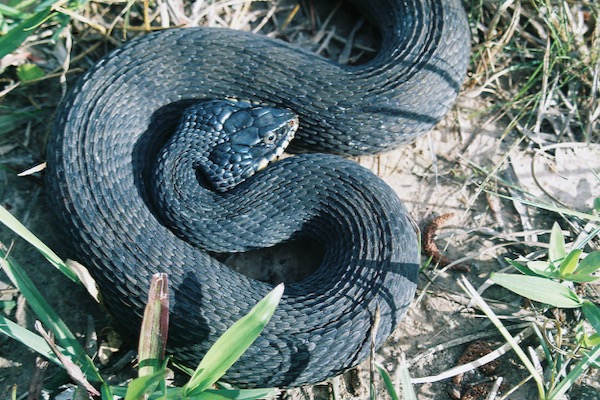 This frightened but nonvenomous plain-bellied water snake has flattened its head into a triangular shape. Photo by Michael Smith.

Let’s start with the “head shape” rule. Our pit-vipers (copperheads, cottonmouths and rattlesnakes) have fairly large venom glands toward the back of the upper jaw. The glands and muscles make their heads fairly wide at the back, while their necks are narrow.

For many species, the head winds up looking somewhat triangular or arrow-shaped. But some of our harmless snakes like rat snakes have heads that are wider than the neck.

What really ruins the “triangular head” rule is what many harmless snakes do when threatened and scared. They flatten themselves, which makes them look bigger, hoping their enemy will back off. The snout does not change much, but the back of the jaws can flatten quite a bit, giving the harmless snake a head that can look like a triangle. 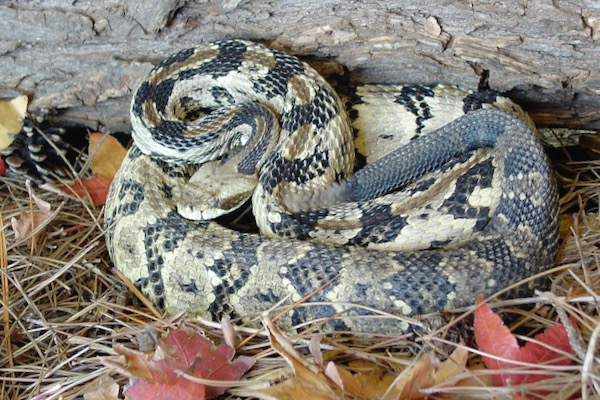 And one more important thing: The venomous coral snake has a small head not much wider than the neck and definitely not triangular. 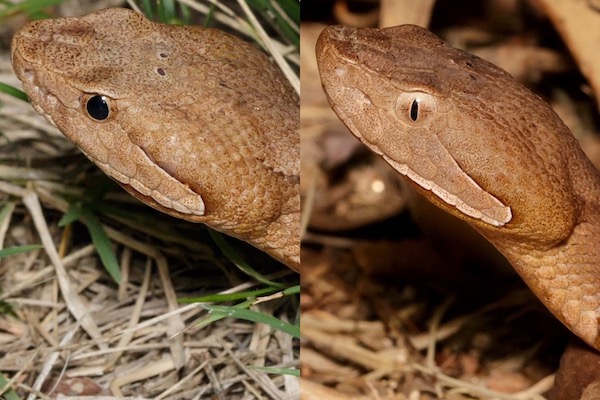 Two photos of a copperhead snake. The one on the left was in low light, with fairly round-appearing pupils, while the one on the right was in brighter light, with pupils closed into a more elliptical shape. Photos by Meghan Cassidy.

This is another rule based on our pit-vipers. If you look closely in good light, the pupil of a copperhead, cottonmouth or rattlesnake is elliptical – a vertical slit like a cat’s.

Most (not all!) of our nonvenomous snakes have round pupils.

There are several Texas snakes with elliptical pupils, which have enlarged teeth in the back of the mouth and a mild toxin to help immobilize prey. The toxins of such snakes, such as the small Texas night snake, is not medically significant for humans. They are exceptions to the rule that cat-eyed pupils signal danger.

Pupils open in low light, so that the snake can see better. As the elliptical pupil opens, it looks more rounded. This means that in near-darkness our pit-vipers would look like they have round pupils. This is strike two for the usefulness of the rule.

There is a third strike, which should mean the rule is out. The dangerously venomous coral snake has round pupils, though this snake’s small eyes make it difficult to see the shape of the pupils. 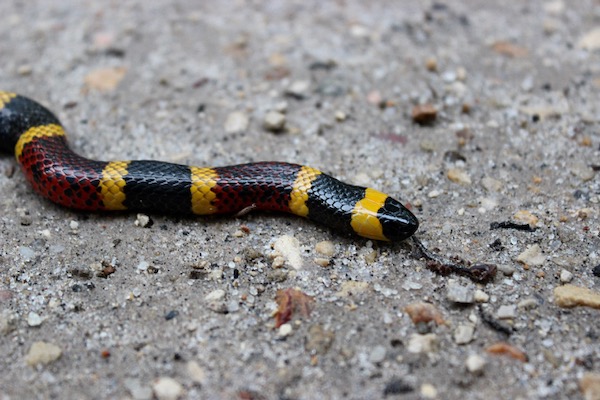 Can you tell the shape of this venomous coral snake’s pupils? They are round. Photo by Michael Smith.

To fully put this rule to rest, consider this: In order to see the snake’s eyes closely enough to tell what shape its pupils are, you would have to get too close. When you spot a snake in the field, it is often like the encounter I described at the beginning. You get a partial or imperfect look at it, and chances are you won’t get a good look at the eyes.

This rule was developed for the North American coral snakes, which are typically ringed in red, yellow, and black. There is another group of harmless snakes, the milk snakes, that pretty closely mimic the coral snake’s rings, but the pattern is arranged differently.

For coral snakes in the U.S., the usual pattern is for broad red bands and black bands to be separated by narrow yellow bands. Therefore, red and yellow colors touch in the coral snake. (“Red and yellow kill a fellow” goes the saying). For milk snakes, the yellow or cream-colored rings are isolated from the red bands by rings of black, so that the red only touches blackl (“Red on black, friend of Jack.”) 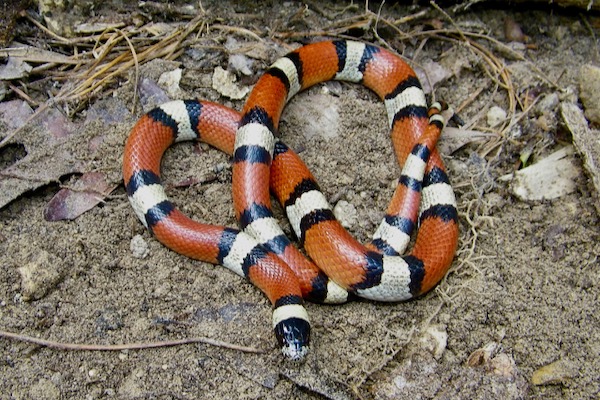 This harmless Louisiana milk snake is an example of the “Red on black, friend of Jack” rhyme. Photo by Michael Smith.

Unfortunately, there are a couple of problems with this rule.

First, there are a few harmless snakes in the U.S. other than milk snakes where red and yellow colors touch. One of them in Texas, is the long-nosed snake whose red saddles are edged in yellow or cream color.

Additionally, if you travel outside the U.S., there are species of coral snakes for which the rule does not work. And additionally, the red bands of the coral snake often have patches or speckles of black within them, and a few turn up where there is hardly any red color at all.

And so, the rule works some of the time but certainly can fail.

Now, try applying the rule to a rapidly moving coral snake or milk snake and see how hard it is to be sure which color borders the other.

When you encounter snakes in the real world, making those kinds of observations are hard. 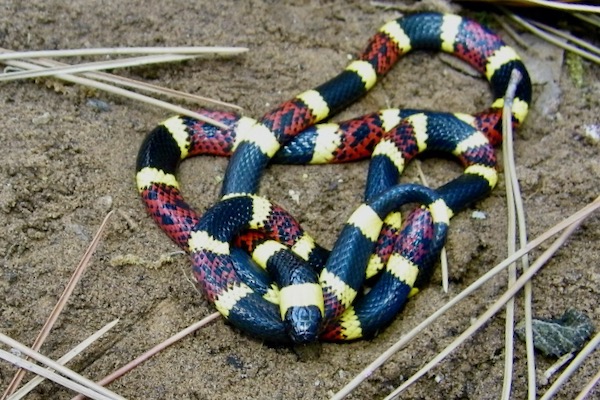 This venomous coral snake is an example of the “Red touch yellow, kill a fellow” rhyme. Photo by Michael Smith.

WHAT SHOULD THE RULE BE?

If you spend time hiking or camping in Texas or you live in a rural area, you do need to be prepared for encounters with snakes. Here are two rules that I think are the best ones to follow:

1. STUDY. If you would like to be able to identify snakes, get a field guide and study it. A useful one is Texas Snakes: A Field Guide  You could use the app iNaturalist to see photos of nearby snakes that have been identified by experts, and download the free guide to North Texas’ venomous snakes at my website.

Additionally, there are Internet or Facebook groups such as What Kind of Snake is This – North Texas where participants can post photos of snakes they need help identifying.

With lots of practice and field experience, you reach a point where your brain processes lots of details quickly and you recognize the snake just as someone who likes cars can tell the make and model of car at a glance.

That’s what Meghan did. She hesitated, then got a look at the head and noticed that the lips did not have the dark bars of the water snake. There was a dark band through the eye. She didn’t follow a rule, she just knew what these snakes look like and determined: “Cottonmouth.”

2.  WALK AWAY. Leave the snake alone and keep a safe distance. The snake wants nothing to do with you and will avoid you if you leave it alone. (Sometimes a frightened snake will make a break for the safety of a hiding place, so if it comes toward you just step out of the way.) If you don’t get close to it, the snake cannot bite you and so you don’t really have to know whether it is venomous.

Some people believe they need to kill any venomous snake to avoid future encounters. If your property is attractive to snakes, then killing one just opens up an opportunity for another snake to move in.

Trying to kill the snake usually means you have to get close to it. It will be frightened and trying to defend itself, increasing the chances that you will be bitten. Instead, just walk away, or if you can stand, a safe distance away you can get a good look at a fascinating animal.