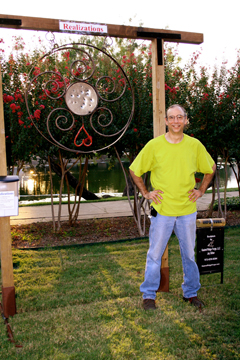 Lucas resident Jay Silber is a blacksmith whose company Kestrel Ridge Forge is all about eco-friendly recycling.

“Blacksmiths have always been great recyclers," said Silber. "From the very earliest days of the Iron Age, metal was a scarce commodity. By repairing items instead of trashing them, that means less for the landfill and less energy spent making new metal.”

Silber turns his recycled iron and steel into conservation, he says, in the tradition of a colonial blacksmith.

“I repair metal pieces for people. A customer brought me a broken metal bracket that held an antique bed together,” he explains. “They hated to throw the bed out, but without the bracket, it was of no use.”

Since it was a gorgeous frame made from beautiful wood, Silber knew he had to repair it despite the time it took.

"I made the necessary piece and saved this piece of history for another 100 years of use.”

As a rule, blacksmith art is eco-friendly because it comes from a naturally occurring material, iron, and then lasts for a very long time.

“In our disposable society, this concept escapes many people,” he says. 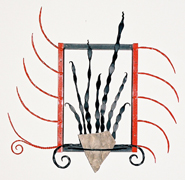 One of the most enjoyable art pieces for this artist/blacksmith extraordinaire to create these days he says include his "Alive and Dead Friends" pieces.

“They are pieces created in honor or memory of friends. The first of the series started with pieces of scrap purchased at a steel-recycling yard. Without a plan, I started heating, forging and twisting pieces of metal. As assembly progressed, it reminded me of Jimbo, a friend from summer work during college. So I finished it out in his honor. Even had a jeweler friend make earrings for the piece.”

Another special piece for Silber is a piece he created for a friend who had Legionnaires' Disease.

“I did a really cool piece in her honor that was first shown at a gallery on Dragon Street. It’s a life-snuffed-out sort of thing.”

Finding his metal from a variety of places, Silber says sometimes material just shows up at his shop since on more than one occasion people have dropped off scrap metal because they know he uses it. However, a downside is that  recently people also stop by to steal it.

He also finds scraps on the side of the road or buys it at recycling yards and he makes his own scrap metal too since he tosses his mistakes into a pile to be reused later for another project.

Silber bought his blacksmith shop at age 15, which many at the time considered an unusual choice for a boy his age, but he says it seemed perfectly normal to him and he has been doing it now for over 40 years. Even so, he says there are challenges he faces. For example, the Texas summer heat.

“Standing in front of a 3,000-degree fire when the temperature is over 100 outside can be fairly unpleasant,” he explains. “It also limits the creativity, it’s hard to think when you are just trying to survive the heat and stay hydrated.”

His other challenge is price point. He says many people expect metalwork to be priced like the stuff they see at trade days.

“If you like the stuff you see at trade days, you probably won’t be one of my customers. You have to know and appreciate the difference in quality. I often tell people that I am probably the most expensive solution to their problem and for a while, I was getting a lot of people asking about making them knobs for the kitchen cabinets.”

That is expensive though, since for him to make kitchen cabinet knobs he would have to do each one at a time. 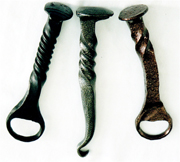 Silber’s most popular items are the functional art items he creates and he says he has probably sold more bottle openers than anything else. He makes the bottle openers from old railroad spikes that came off an East Texas WWII army base.

“The spikes seem to have more personality than just plain bar stock.”

As a rule, he says he gets his ideas from the scrap metal itself. For example, finding old pieces of iron or steel, seeing what these items were in the previous life and deciding to forge something different.

“Most of the time the piece develops as forging progress. Only rarely is there a design ahead of the forging,” he concludes, adding that he is inspired for many reasons. “For a while when I was doing pieces in honor of friends that passed away that was very satisfying [although] it sounds ghoulish to some, but was quite cathartic. Then I added some living friends just to even things out.”