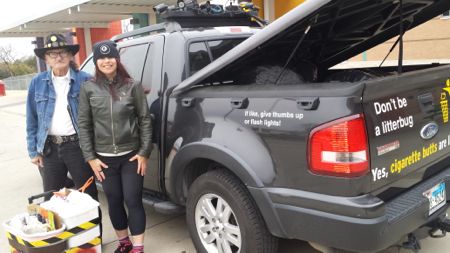 Nissa Salas, founder of the 30/30/30 Litter Campaign in the Pleasant Grove neighborhood in Dallas, gets assistance from volunteer Kenneth Winn and his litter patrol truck. Photos courtesy of Nissa Salas.

To some folks, the number 30 might not mean much, but to Nissa Salas, a Dallas personal trainer, the number means a lot – times three. That’s because her 30/30/30 Litter Campaign, which she began on Aug. 30 of last year, is making an impact on her Pleasant Grove neighborhood in southeast Dallas.

The catchy name comes from the goals of the program.

“30 people pick up litter for a minimum of 30 minutes on the 30th day of every month,” Salas explains.

Salas says she initiated the cleanup first by contacting her area’s city council member, Rick Callahan. She then went door to door to get the local businesses involved.

The 30/30/30 Litter Campaign picks up on Carr Street, Scottsdale Street, Military Parkway and Buckner Boulevard, where Salas says there seems to be an inordinate amount of litter, from food containers to beverage cups.

With about 15 volunteers currently working with her on the project, Salas says the list of volunteers is impressive from Callahan himself to Dallas Empire Fitness owner and members to Dallas Police Department volunteer Kenneth Winn.

In fact, Winn has even brought his "litter patrol" truck for the cleanup with several cameras installed to catch folks littering “in the act,” Salas says.

The ongoing program has garnered support from all age groups. 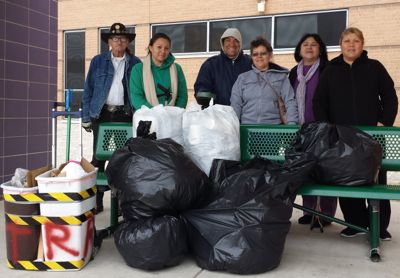 “Volunteers range in age from 19 to 71 years old. They have varying schedules, but mostly go out as a group.”

In addition, she recruited help from the local elementary schools recently.

Since its inception, the do-gooders have been consistent in cleaning up the neighborhood and have already made an impact.

“We have picked up 30 or more trash bags of litter in the first three months,” said Salas.

She’s expecting that the colder months will be challenging for some folks and is always looking for fresh recruits.

“The businesses are actively interested,” she said. “But we [do] need to recruit more volunteers. They seem more interested when the Councilman contacts them.”

But Salas has a history of meeting challenges.

A former Dallas ISD teacher, Salas became a fitness guru after losing 60 pounds. She then, not only began to train in the gym, but she launched a business in her home, which led to her most recent passion.

“I run around my neighborhood and I noticed an extreme amount of litter,” she says.

So that’s when she decided she had to do something about it. 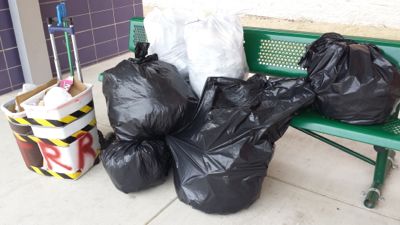 “Councilman Callahan was supportive and insisted on spreading the word,” she adds. “He insists that we need to keep the ‘pleasant’ in Pleasant Grove.”

As for now, the group will continue picking up litter on a regular basis.

“It keeps the water supply and the streets cleaner,” Salas said.

And, Salas says she now runs every day in peace, knowing that she and her community have made a difference.

To volunteer or learn more about the program, contact Salas at NissaSalasFitness@gmail.com.