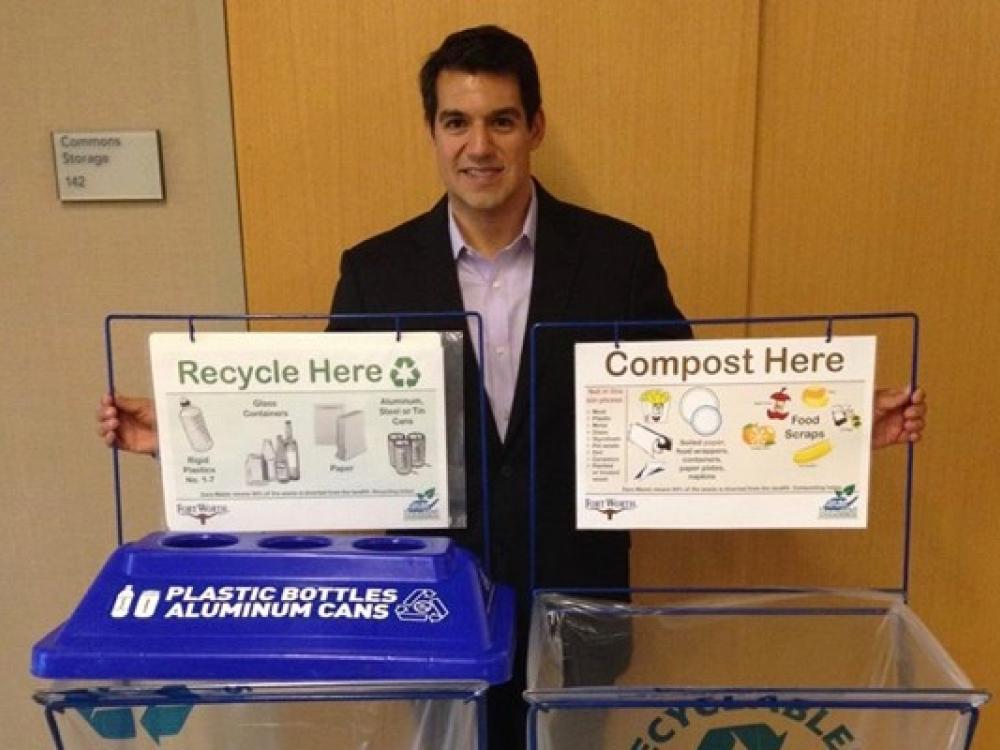 Fort Worth Symphony Orchestra​ conductor Miguel Harth-Bedoya invited his colleagues to reduce their waste. Out of his experiment, Cowboy Compost was launched. Courtesy of Facebook.com/KeepFort WorthBeautiful.

Fort Worth Symphony Orchestra conductor Miguel Harth-Bedoya is known to wax poetic about his favorite composers during concerts. But lately there's a new topic you'll hear the extroverted orchestra leader proselytizing about, one that his fans couldn't have foreseen: compost. 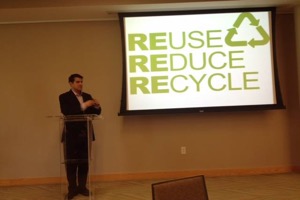 It's part of his bigger obsession with zero waste. The native Peruvian speculates that his desire to send as little personal trash to the landfill as possible is rooted in his childhood, growing up in Lima in the 1970s.

“There was no garbage collection. There were piles of garbage everywhere,” along with the smell and the health risks associated with it, he added.

Miguel Harth-Bedoya speaks about zero waste at a city of Fort Worth event on Earth Day. Courtesy of Facebook.com/KeepFort WorthBeautiful.

When he moved to the United States to attend the Curtis Institute of Music in Philadelphia in 1987, he was amazed to see all the trash cans, a sight most Americans take for granted.

“I was thinking ‘how progressive,’” he now says with a laugh.

His environmental bent was nurtured when he and his wife moved to eco-friendly Eugene, Oregon in the 1990s, where "people bike to work and chain themselves to trees,” he joked.

Then in 2000, Harth-Bedoya was hired as the Fort Worth Symphony Orchestra’s conductor and he and his wife settled in Fort Worth and started a family.

Over the years, as he traveled around the globe as a guest conductor, living part-time in Norway, the garbage dilemma nagged at him. He observed that some cities abroad seemed to put more effort into reducing waste than the U.S., especially those with limited landfill space.

So earlier this year, he took a hard look at his own trash – what happens to it when it leaves the house? He researched the issue, took a local landfill tour and was shocked to see the reality for himself.

“They take in about 4,000 tons of [commercial and residential] waste a day. The landfill could last only another 20 years.” 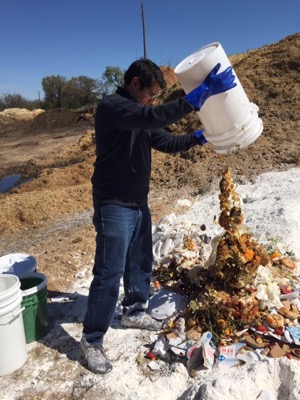 Determined to be part of the solution, he decided to enlist his fellow FWSO members to join him. In the spring, he invited musicians and staff at FWSO to participate in a two-month zero waste pilot program to see how much they could reduce their waste at work and home.

According to Michael Shih, violinist and concertmaster for the FWSO, Harth-Bedoya presented a slide show after work hours with the shocking statistics about waste.

“The presentation was very powerful,” said Shih. “It was startling to see photos of landfills and know it’s right there not far from your house."

Angie Prater, a FWSO ticket office employee, was another coworker who found Harth-Bedoya’s enthusiasm infectious. After his presentation, she ran into “Maestro” at a grocery store cafe where he was eating with his family.

“He showed me the bags he had brought with him so he could take the waste home. He really does believe there’s something we can do to make a difference.”

Soon, he had 60 people signed up for the project.

Over the next eight weeks, the FWSO zero waste participants ramped up their recycling efforts. Harth-Bedoya had already added recycling bins in the office. He had also installed a water cooler and given everyone reusable water bottles. However, he quickly realized leftover food was still going in trash bins. So after researching the topic, he organized a compost collection system he called Cowboy Compost, to collect their food waste.

He enlisted a family friend, Johanna Calderon, to serve as manager. Calderon said when Harth-Bedoya approached her with the idea, like Shih, she was shocked by the landfill statistics.

“He showed me a picture of the landfill. I said ‘Are you serious? This is a couple of blocks from my house!’” 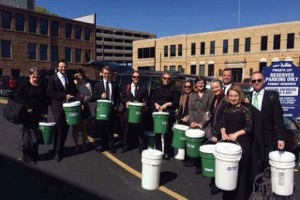 During the first few weeks, buckets were carefully inspected with Harth-Bedoya schooling the FWSO staff on things to leave out, like produce stickers.

Fort Worth Symphony Orchestra staff with their compost buckets. Courtesy of Facebook.com/CowboyCompost.

Meanwhile, Shih said he was thrilled to learn all that he and his wife could put into the buckets – fruit peels and rinds, coffee grounds, coffee filters, paper napkins, tea bags. Over the course of the experiment, the group collected 6,000 pounds of waste. It was transformed into organic gardening products at Silver Creek Materials in Fort Worth.

After the project was over, the participants didn’t want to give up the service. But how could they continue? For the pilot program, Harth-Bedoya had footed the bill – for gas, buckets and a part-time employee. After some figuring, Harth-Bedoya realized he could turn Cowboy Compost into a business if he opened the service to the public and started charging a small fee.

Both Shih, who likes the convenience, and Prater, who shares an apartment with her domestic partner with no yard for a compost pile, say they will definitely be clients.

Harth-Bedoya admitted that the three tons they collected is “peanuts” compared to what is picked up by waste haulers. But he speculated the business could have an impact as it grows. In the meantime, Cowboy Compost serves its original function - allowing Harth-Bedoya and his family of five to reduce their landfill waste to a third of what it was before.

“I created [the business] so I would have the option to compost,” he said. “I’m the first and most satisfied customer.”