Why We March: Dallas marchers share what drives them to March Against Monsanto

Around 1,000 people rallied in Dallas City Hall Plaza to March Against Monsanto on Saturday, May 25. The atmosphere was lively with many people carrying colorful signs and wearing costumes. The march started at City Hall and proceeded to Farmers Market several blocks away. Those who participated represented a cross section of the environmental community. Green Source DFW asked several people their reason for marching. 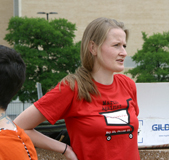 Jessica Winters, an organizer of the event, said that she came to know about Monsanto through documentaries. The first was Food Inc. that really piqued her interest. She then watched King Corn, followed by the documentary The World According to Monsanto. According to Winters, the march's goal is to promote the awareness of the dangers of GMOs generally and those of Monstanto specifically.  Eventually, she would like to see the repeal of what's nicknamed the Monsanto Protection Act. 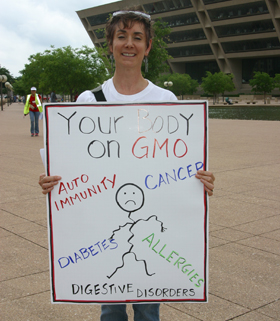 Nutritionist April Stooksberry says that she is seeing a lot of people with increased digestive diseases, auto immune diseases and cancer.  She thinks that genetically modified foods are a big component of that.

"I am taking a stand and educating people that we should not be eating genetically engineered foods," she said. "Think about it, 20 years ago nobody knew about celiac disease. Now everybody knows what it is."

She thinks that gluten and wheat intolerance are caused by genetically modified wheat. 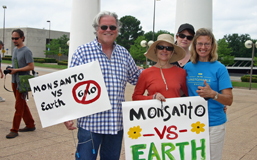 Organic grower Tom Motley says he attended the march because he doesn't support the developments of GMOs. "We think that it's unproven technology and dangerous," he said. "We need to be careful about what we put in our bodies." He added, "I don't like Monsanto and how lobbyists establish [government] policy." 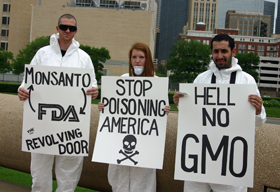 Health enthusiast Ryan Heller of Frisco said: "I think that it is important that everyone knows what's in their food and what they're eating. They don't want to label GMOs so you don't know what's going on in your body. I am big into health and staying healthy." He added that the more research he does, the more concerned he is about foods grown with pesticide. "It can't be healthy." (Photo: Ryan with Greg and Sarah.) 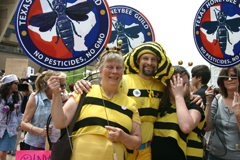 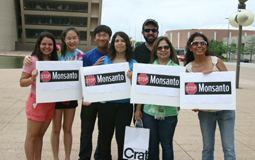 (Photo: Left, The Honey Bee Guild was marching for the bees. Right, One of the many groups of young people present.) 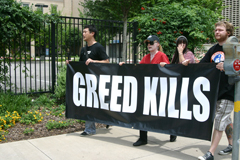 Marchers on the way back from Farmers Market.

See the GreenSource story about how the march got started.