Yesterday, Lt. Gov. David Dewhurst said cold weather had knocked out about 50 of the 550 power plants in Texas, totaling 8,000 megawatts.  We can’t tell you which plants were down because that information is considered “confidential under market rules.”  According to ERCOT’s website, its market rules “are developed by participants from all aspects of the electricity industry” and reviewed by the Public Utility Commission. This coupled with an increase in demand caused the Electric Reliability Council of Texas to launch the longest period of planned outages in state history, affecting 1.4 million consumers before being halted mid-afternoon. 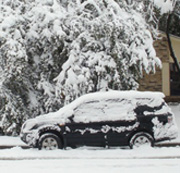 What we do know is wind energy played a major role in keeping the blackouts from becoming more severe. Between 5 and 7 am yesterday morning (the peak of the electricity shortage) wind was providing between 3,500 and 4,000 MW, roughly the amount it had been forecast and scheduled to provide. That is about 7% of the state’s total electricity demand at that time, or enough for about 3 million average homes.
Currently, total wind generation capacity in ERCOT is 9,528 MW and a mere 23 days ago, wind generators set a record for instantaneous wind generation of 7,227 MW (76.3% of installed capacity and 25.8% of the total load served at the time).  I’d say wind was doing its part this winter

On the other hand, it has been reported that Energy Future Holdings’ plants accounted for almost half of the total missing capacity, but they have declined to say which other plant (besides Oak Grove and Sandow) was down.

In case you don’t know who Energy Future Holdings is, they are the electric utility company formerly known as TXU until its $45 billion leveraged buyout by Kohlberg Kravis Roberts, Texas Pacific Group and Goldman Sachs. That purchase was the largest leveraged buyout in history.  As part of the buyout, the electric distribution part of the company is now called Oncor Electric Delivery, the electric generation business is called Luminant, leaving TXU Energy as solely a retail provider of electricity without any electrical distribution or production assets.

As part of a deal, between Environmental Defense Fund, the Natural Resources Defense Council and TXU, that helped broker the buyout, TXU took off the table, plans to build 8 of 11 proposed coal-fired plants in Texas.

One of the three plants that went forward is Oak Grove, one of the failed coal plants Dewhurst mentioned earlier in the day.  Oak Grove, is a 1,600-megawatt facility that is among the largest in Texas and began operation only in the last few years. Overnight, frigid temperatures caused a portion of the pipeline to fail and Luminant Generation Co., which operates the plant, is still assessing the damage.  Another of the three TXU plants that was not taken off the table during the buyout is Sandow 5, the fifth coal-fired plant at the Sandow Generating Station site. Luminant currently operates both this unit and the remaining operating unit (Sandow 4) which used to be operated by Alcoa to supply power to the aluminium processing plant which has now closed down.  The older three units at this station are currently not operational.

Late yesterday, ERCOT warned it might have to initiate outages again on Thursday morning if the down power plants, including three new coal plants owned by Energy Future Holdings, didn’t get fixed.  Fortunately, that does not seem to have happened, but Sen. Troy Fraser, chairman of the Natural Resources Committee, said he planned to hold hearings on the blackouts.

In the meantime, energy officials continue to use every tool they have to bring power on the system.  This includes:

So, to sum up: who DIDN’T contribute to yesterday’s rolling blackouts?  Well, wind and hydro really saved our bacon when we needed it most.  And let’s not forget solar.  No one has heard much from ya’ll, so why don’t you folks with solar installations let us know how you fared during the blackouts yesterday? All in all, it was a great day for renewables.  Fossil fuels? Not so much.  ###