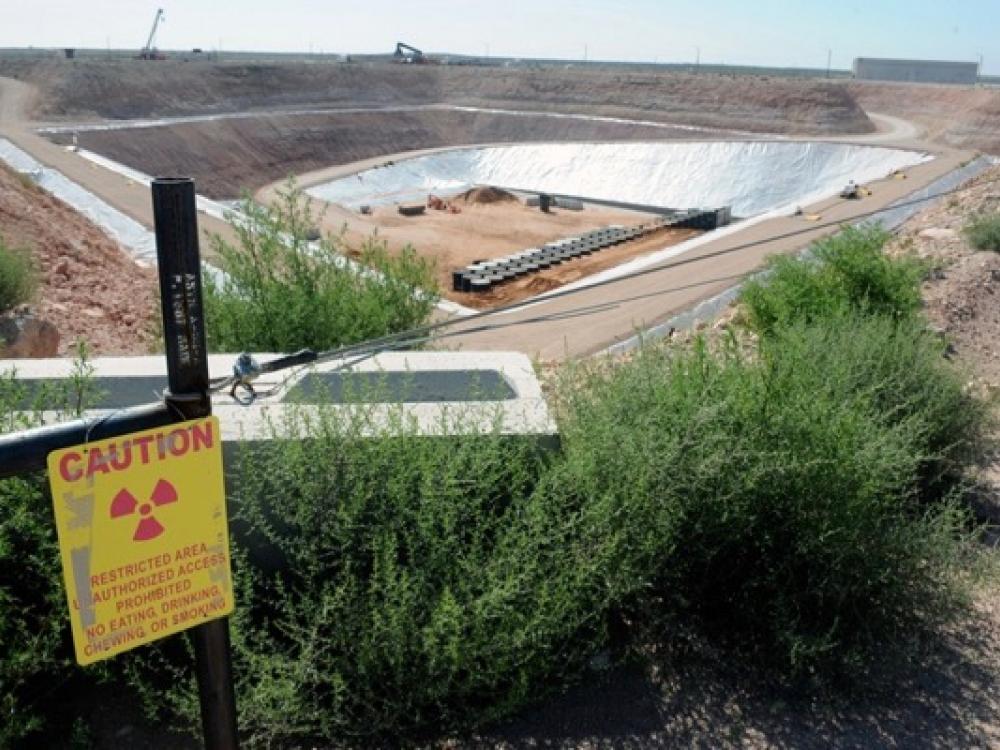 A proposal to bring the nation’s spent nuclear fuel to West Texas appears to be on the ropes.

Dallas-based Waste Control Specialists, which currently stores low-level radioactive waste in Andrews County, has asked the U.S. Nuclear Regulatory Commission to temporarily suspend a review of its application to store tens of thousands of metric tons of spent nuclear fuel currently scattered at reactor sites throughout the country.

This is good news for North Texas as high-level radioactive waste from across the U.S. would have likely traveled through the Metroplex via interstate or rail if WCS had been permitted to store tons of spent nuclear fuel at its West Texas dump.

WCS pitched the massive expansion as a solution to a problem that has bedeviled policymakers for decades.

The reason for the requested freeze? The company, which runs the state’s only radioactive waste dump, is bleeding cash and is struggling to find the estimated $7.5 million needed to continue the licensing process. Waste Control Specialists “is faced with a magnitude of financial burdens that currently make pursuit of licensing unsupportable,” Rod Baltzer, the company’s president and CEO, said in a letter to the federal commission dated Tuesday.

The Nuclear Regulatory Commission confirmed Wednesday that it would freeze the review.

"Managers are working with the staff to close out their work to prepare for a future resumption, and to reassign them to other casework," said Maureen Conley, a commission spokeswoman.

The request comes as EnergySolutions, a Salt Lake-city based waste company, is trying to buy Waste Control Specialists. The U.S. Department of Justice is suing to block the merger, arguing it would essentially create a monopoly on radioactive waste disposal.

“WCS expects to go forward with this project at the earliest possible opportunity after completion of the sale,” Baltzer said in a statement.

Experts call this week's request a setback for a project that the company initially suggested it would start constructing by 2019; opponents of the plan declared the request a win for their side.

While the company’s questionable finances were a factor in its request, Hadden suggested that mounting public opposition might also have played a role. In February, Bexar County commissioners unanimously approved a resolution opposing shipment of high-level nuclear waste through the San Antonio area on its way to the site. Midland-area residents have urged local officials there to back a similar resolution.

And several longtime Andrews residents spoke out against the project in February during a public hearing held by the Nuclear Regulatory Commission.

“I think WCS is becoming aware that this is a bigger battle than they anticipated,” said Hadden.

Dale Klein, associate vice chancellor for research at the University of Texas System and a former Nuclear Regulatory Commission chairman under Presidents George W. Bush and Barack Obama, said the cost of obtaining a license should not have come as a shock to the company.

“There should have been a dialogue between WCS and NRC,” he said. “Having spent so much time and effort for a licensing application, it’s surprising to me that they would now claim that they were surprised by the cost to review.”

When Klein was NRC chairman, he said he saw several applicants ask for a similar pause. That resulted in a mix of outcomes — some completely abandoned the application process, but some ended up restarting it.

Either way, he said WCS now runs “the risk of losing momentum.”

Even if WCS restarts the application process, it will take months just to reassemble a team of reviewers for the highly technical process. For now, such reviewers will work on other projects.

“It would not be unusual to take six months to rebuild a team,” Klein said.

Waste Control Specialists has been the only company in the country officially seeking to build a temporary storage facility while the federal government grapples with finding a permanent disposal site. But this month, a New Mexico group submitted an application to the Nuclear Regulatory Commission to build a temporary storage facility, just across the state line from Andrews.

In a 2014 letter to his then-fellow state leaders, Rick Perry — who championed the WCS expansion as Texas governor — cited that competition as reason to move ahead with the project. He now heads the U.S. Department of Energy, which plays a major role in advancing and implementing policy on nuclear waste

Jim Malewitz covers energy for the Texas Tribune. Before arriving, he spent two years covering energy and environmental issues for Stateline, a nonprofit news service in Washington, D.C., where his work also appeared in The Washington Post and Chicago Tribune, among other newspapers. A native of Michigan, Jim has an undergraduate degree from Grinnell College in Iowa, where he played varsity baseball. He also holds a master’s from the University of Iowa, where he helped launch the nonprofit Iowa Center for Public Affairs Journalism. Jim loves tacos and barbecue, making him a good match for Austin’s eating scene. However, he remains on the lookout for great waffles.