Urban Youth Farm in West Dallas to be model of sustainability 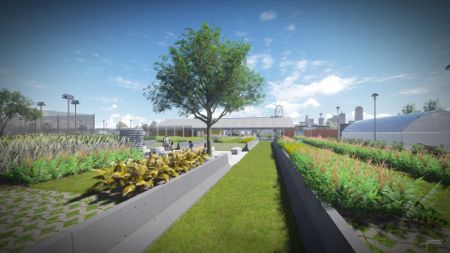 A joint venture between the UTA School of Architecture and West Dallas Community Centers, the La Bajada Urban Youth Farm will grow organic produce and employ neighborhood teenagers to work and cultivate the farm. Renderings courtesy of Kevin Sloan.

An urban youth farm planned in West Dallas is set to transform an overgrown field into an organic farm, park and community center. When completed, the La Bajada Urban Youth Farm will educate a new generation in sustainability as well, say developers.

A joint venture between the UTA School of Architecture and West Dallas Community Centers, the youth farm, near Trinity Groves and the Margaret Hunt Hill Bridge, will grow healthy organic produce and employ neighborhood teenagers to work and cultivate the farm.

Gatzke came up with the idea from his prior tenure at Tulane, where he was dean of the Tulane School of Architecture. He was impressed with the accomplishments at “Grow Dat Youth Farm” in New Orleans and realized just how much more could be done with the initial idea. 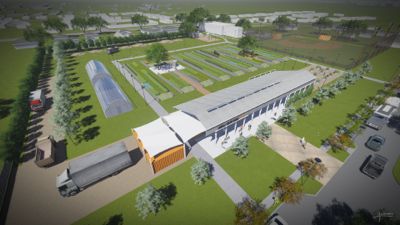 At the onset, Gatzke was looking for a community engagement project for UTA’s School of Architecture that would also develop new approaches to urban green space.

He says he stumbled on the Bataan Street Community Center, which at first he thought it was city property. To his surprise he found out it was a social service non-profit that had been active in the community for 80 years providing educational and recreational programs. He also saw potential in the neighborhood.

“I like the West Dallas area. The new development is exciting, yet the area has a funkiness that should be encouraged, preserved and built upon – not eradicated,” Gatzke says.

What better place then, he thought, to add sustainable benefits as well.

Kevin Sloan, a former UTA studio instructor and the landscape architect for the project agreed.

“Farming and community gardens are an excellent way to transform fallow or unused urban lands into productive landscapes and places,” said Sloan.

Utilizing about two acres of potential planting area, Gatzke says the facilities onsite will be made out of converted shipping containers for storage, administration, restrooms and lockers and located under an open air pavilion strategically arranged to provide gathering space for classes and events as well as a kitchen for cooking demonstrations and food processing like pickling.

As for the overall architectural design of the project, Sloan said the one-acre growing field is designed like a modernist landscape where repurposed concrete highway barriers raise the growing beds into a repetitive system of garden stripes.

“An open-air white-painted shade pavilion is situated between the growing field and Herbert Street to give the Youth Farm an urban identity and also to serve as a social condenser for organized and casual activities.” 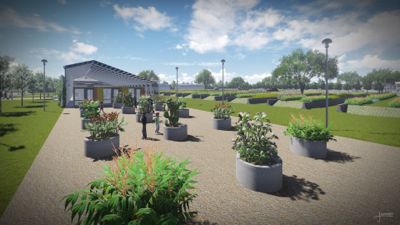 There is hope that the space will be used by the community as a neighborhood venue for church and social group activities, weddings, receptions and even family events. A Little League baseball field will be added to the existing playground, basketball courts and Bataan Recreation Center.

“It’s the perfect mixing or 'cross-programming' of elements that are typically separated, producing a vibrant and useful way of tying everything together,” said Sloan.

As for progress on project, the design has been finalized with a few tweaks and Gatzke is working on private donor money and in-kind donation with hopes too, that the city of Dallas will offer some operational support once everything is up and running. They hope to be planting by next spring.

“This is essentially a job and educational program for high school students,” Gatze said. “Like any such program it will require continual subsidy, but we think the long term benefits will be well more than the cost.”